The Ghost Woman of Akai’niskui

The area surrounding the city of Lethbridge, Alberta, has is fair share of ghost stories. Lethbridge’s Galt Museum, formerly the Galt Hospital, is said to be haunted by the spirit of a patient who was unexpectedly killed during a routine appendectomy. The lady’s washroom of Lethbridge’s Bowman Arts Centre, formerly the Bowman School, is said to be haunted by the ghost of a young Chinese girl who was abused as a student there. And the Empress Theatre in nearby Fort Macleod, the oldest continually operated theatre in western Canada, is purported to be the home of at least one spectral resident.

These ghost stories are only fitting for an area that has seen more violent and tragic death than almost any place in Alberta. From 1869-1874, the Lethbridge area was known as Whoop-Up Country. In those days, American traders ran trading posts along the Oldman and St. Mary’s Rivers, from which they sold infamous ‘firewater’ whiskey, repeating rifles, and other trade goods to the local Blackfoot. Many Indians fell victim to the firewater itself, a rotgut concoction composed of American whiskey diluted with river water, chewing tobacco, Jamaica Ginger, blackstrap molasses, red pepper, lye soap, red ink, and often a dash of strychnine. Others sold everything they had in exchange for the beverage, and later succumbed to starvation or the brutal prairie elements. Many more were killed in drunken, whisky-fuelled arguments by friends and family. In 1870, the Lethbridge area became a battleground during the Battle of Belly River, during which hundreds of Indians were killed. In 1869, the area was ravaged by a particularly devastating smallpox epidemic. And in 1837 and 1838, the Lethbridge area, along with the entire North American Great Plains region, was swept by a smallpox epidemic the Blackfoot would never forget. After the Blackfoot finished burying the last of their dead in 1838, they referred to the area as Akai’niskui, or ‘Many Died’. 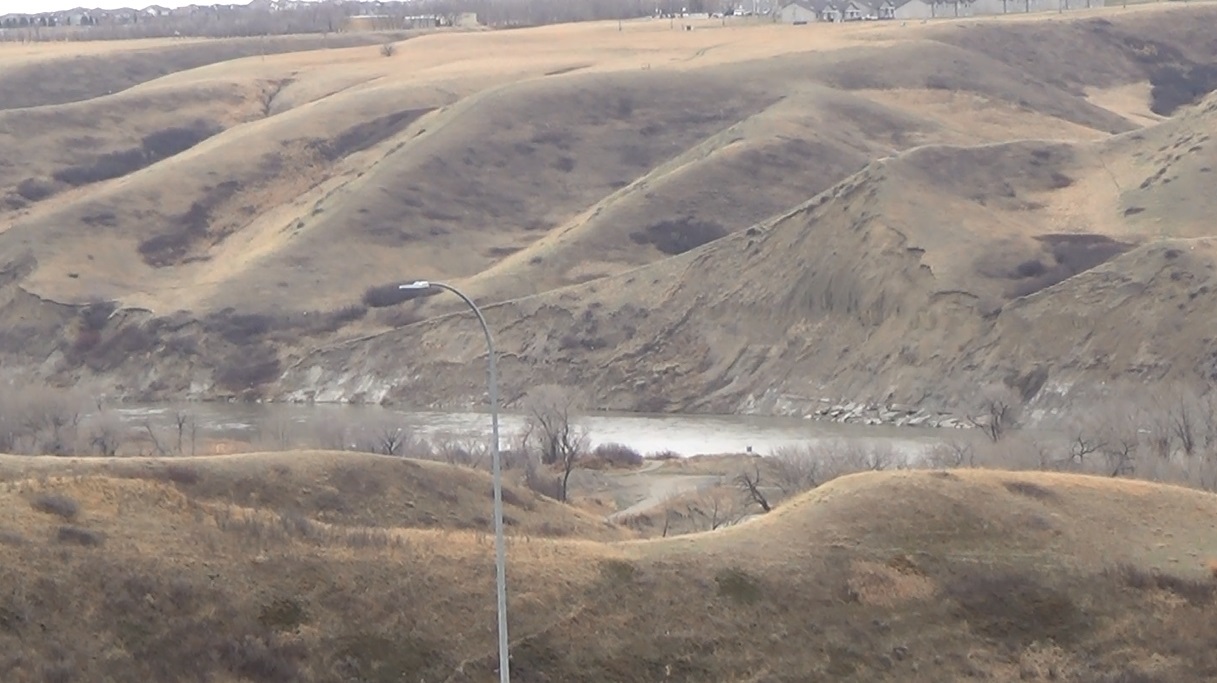 According to historian Hugh Dempsey, one of the classic Blackfoot ghost stories to come out of the Lethbridge country is the tale of the ghost woman of Akai’niskui.

Sometime in the 1850’s, seven Blood warriors travelled on foot to the prairies east of the Cypress Hills for the purpose of stealing Cree horses. The leader of the party was a young and successful brave named Heavy Collar. After scouring the plains of what is now southwest Saskatchewan without any luck, the party decided to head home. They travelled west through the Cypress Hills, then followed Bulls Head Creek (now known as Ross Creek) towards the South Saskatchewan River near present-day Medicine Hat. While camped on a hill overlooking the Seven Persons Creek (a creek which joins with Bulls Head Creek before flowing into the river), Heavy Collar announced that he would travel ahead in the hopes of finding friendly Blood camps and horses, which he would bring back for his pedestrian companions. If he did not return with horses, he asked his companions to meet him at the base of the Belly Buttes to the west, a traditional summer campsite of the Bloods.

Heavy Collar travelled west up the river for some time. Eventually, he came upon three buffalo grazing by a cutbank and succeeded in killing one. He dressed the carcass and packed a good amount of meat onto his horse, leaving the rest for his companions. He built a fire, cooked some of the meat and ate. Cognizant of the risk of travelling alone, he left his camp and travelled upriver under the cover of nightfall, leaving the fire burning. If any hostile eyes spotted his fire and tried to ambush him, he would be long gone.

Heavy Collar travelled upriver for some time, careful to conceal his tracks, before reaching the site of present-day Lethbridge. With only the moon to light his way, he travelled to a nearby coulee, found a soft patch of grass, and lay down for the night.

Try as he might, the Blood couldn’t sleep. Every time he began to doze, he heard a strange noise nearby. He peered into the dark but couldn’t see anything. He wasn’t sure what was making the noise, but was convinced it wasn’t an enemy brave. Nevertheless, he kept his rifle close, unable to shake the unnerving feeling that he was being watched.

In the morning, Heavy Collar learned, to his horror, that he had spent the night lying next to the skeleton of a Blackfoot woman. Judging from the condition of the body, the Blood warrior estimated that she had been dead for a year. Filled with dread, Heavy Collar forded the river and continued his journey on the other side.

As the day wore on, a storm began to brew. Soon, the rain became too heavy to travel through, and Heavy Collar decided to retire for the night. He built a crude shelter on an island in the middle of the river, built a fire, and began to settle in.

Suddenly, through the lightning and the pounding rain, he heard the hoot of an owl. To the Blackfoot, owls were closely associated with death. According to Blackfoot tradition, ghosts hooted like owls as they wandered throughout the night. Heavy Collar felt a chill run down his spine.

As he cowered beneath his shelter, Heavy Collar heard a peculiar sound in the distance. It sounded like something being dragged through the brush. As he listened, the sound came closer and closer. Soon, whatever was making the noise was right outside his shelter, on the other side of the fire. Heavy Collar hazarded a look and quailed.

At the other end of the fire sat a tall, slender figure. It was dressed all in white, its face concealed by the shadow of a hood. It had long, skeletal legs, which it stretched out towards the fire as if to warm them.

“Who are you?” Heavy Collar managed, his voice barely a whisper. The small hairs on his neck stood on end, and cold sweat trickled down his back.

The figure did not answer. Instead, it stretched its long, bony legs towards him as if to touch him. Heavy Collar drew back, his knuckles white as he clutched his gun. “Who are you?” he asked again. “If you’re a human, speak to me. If you’re a ghost, then take pity on me and leave me in peace.”

Again, the figure was silent. Again, it stretched out its pale, bony legs towards him.

Heavy Collar recoiled, then levelled his gun at the figure. “You won’t speak, and you won’t leave,” he said. “Maybe this will drive you away.” He fired a shot at the figure, and it tumbled back into the darkness.

Suddenly, Heavy Collar heard a ghastly wail. “Heavy Collar!” moaned the spectral voice of a woman. “You have shot me! There is no place where you can hide where I will not find you.”

It was too much for the young brave. Heavy Collar left his shelter, waded back to the mainland and ran through the night, heedless of the rain. At dawn, he arrived within sight of the familiar Belly Buttes, the rendezvous point where he was to meet his companions. Exhausted, he found a spot beneath a cottonwood and slept. He rested for several hours and awoke refreshed. Confident he had put the ghostly woman behind him, he made his way towards the base of the Belly Buttes.

Meanwhile, one of Heavy Collar’s companions stood sentry on a nearby hill. The six Bloods had made their way directly towards the Belly Buttes, and had arrived before their leader. The Indian saw two figures approaching the Belly Buttes from a distance and alerted his companions. As the pair came nearer, the Bloods recognized the familiar figure of Heavy Collar. Behind him, struggling to keep pace with him, was a woman.

The Bloods laughed amongst themselves, assuming their leader had captured a woman from another tribe. They debated whether Heavy Collar would keep the woman for himself, or present her as a gift to one of them. As they joked, they saw the warrior and his female companion disappear into a coulee bottom. Only Heavy Collar emerged from the other side. He saw his friends and made his way up the hill to join them.

“Heavy Collar, where is your woman?” asked one of the braves, gesturing towards the nether coulee. “Are you hiding her from us?”

“Where did you find her?” another asked. “What tribe is she from?”

Heavy Collar realized with a thrill of panic that the ghost woman must have followed him. He told his friends of his frightening encounter with the phantom the previous night.

Some of the Bloods believed him. Others did not, and decided to investigate the coulee themselves. Sure enough, the mysterious woman was nowhere to be seen, and in the muddy coulee bottom, there was only one set of moccasin tracks. After that, they all accepted his story.

The seven Blackfoot travelled together and soon came upon a small band of Bloods. They decided to spend the night with them.

That night, Heavy Collar dreamed of the ghostly woman in white. The woman cursed him for shooting her. She told him that, from that day on, he would never be hit by an enemy bullet, but he would also never capture an enemy’s gun in battle. The ghostly woman also warned him never to return to the place where her skeleton lay.

Heavy Collar was plagued by that curse for the rest of his life. Whenever he led a war party, his group was never able to engage an enemy force in battle. He was never hit by an enemy bullet, but he never earned the honour of capturing a gun. Soon, the Blood began to believe that Heavy Collar was cursed with bad medicine, and refused to follow him on raiding or war parties. Instead of becoming a chief, as many believed he would in his youth, Heavy Collar remained an unlucky warrior for the rest of his life.

When Heavy Collar was an old man, Montanan traders began to sell whisky from posts on the Oldman River. These whisky forts became quite popular with the Bloods, and one day Heavy Collar’s band decided to pay them a visit. The old Indian realized that Whoop-Up Country was the place where he had found the ghost woman’s skeleton, the place he had been forbidden to return to. Apathetic, the old warrior travelled with his band to the location.

The Blood band reached one of the whisky forts without incident, and the men brought in their buffalo robes to trade. That night, when the trading was done, many of the young Blood warriors got drunk. Some of them celebrated by trying out their new repeating rifles, firing off shots into the air. One drunken Blood fired carelessly into the camp. The bullet hit Heavy Collar in the back, killing him instantly. The ghost woman had her revenge.