This article was initially published on my personal website in 2014.

If you’ve ever driven through the town of Fort Macleod, Alberta, on the #3 Crowsnest Highway, you might recall seeing a large palisaded enclosure standing on the side of the road. This structure is a replica of Fort Macleod, the original North West Mounted Police fort after which the town was named. Instead of serving as garrison for Mounties, however, this fort houses a number of NWMP artifacts, accompanying descriptions and, in the summer months, interpretive staff, effectively transforming it into the “Fort Museum of the North West Mounted Police”, Fort Macleod’s most famous attraction and one of the only Mounty-themed museums in Alberta (along with Fort Calgary). 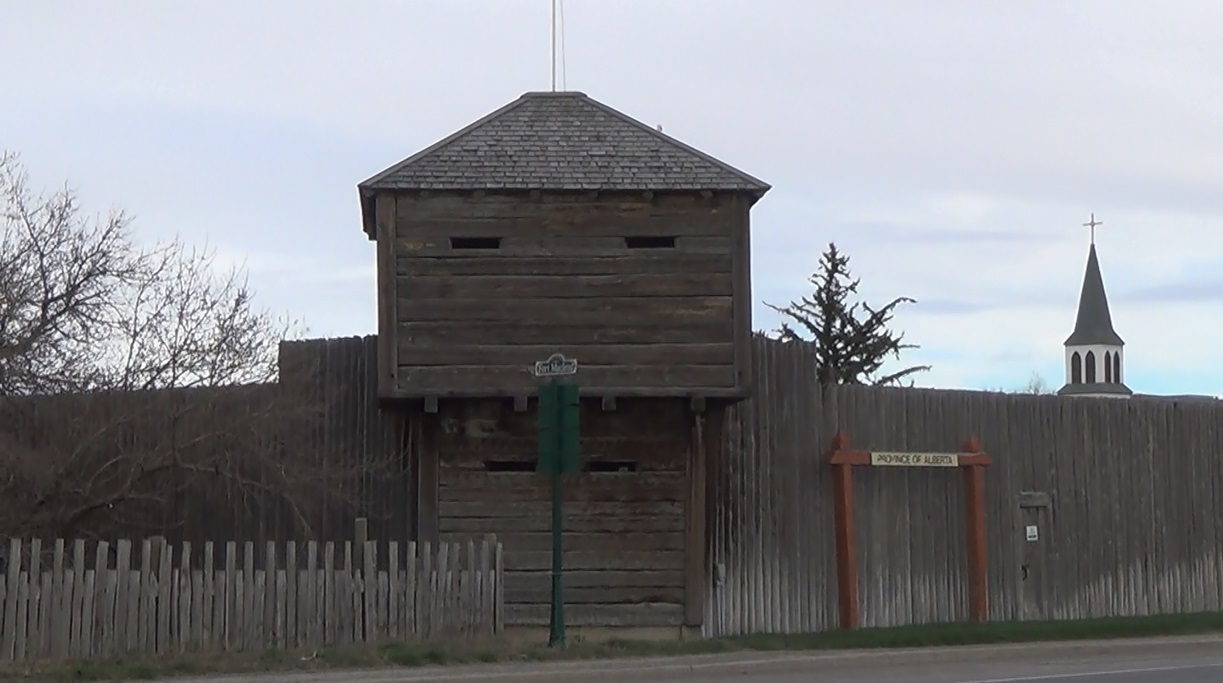 For nearly two hundred years, the Hudson’s Bay Company (HBC) had the responsibility of maintaining law and order in Rupert’s Land (a section of the Hudson’s Bay drainage basin with dynamic borders; a territory which typically consisted of present-day western Quebec, northern Ontario, most of Manitoba, southeastern Nunavut, most of Saskatchewan and south-central Alberta) and the North-Western Territory (a region of British North America consisting of present-day northwestern Saskatchewan, northern Alberta, northern British Columbia, Yukon, northwestern Nunavut and Northwest Territories (with the exclusion of the Artic islands)). On December 1, 1869, the HBC surrendered its charter to the British Crown, transferring Rupert’s Land and the North-Western Territory, as well as its responsibility to enforce British law, to the newly-formed Dominion of Canada. 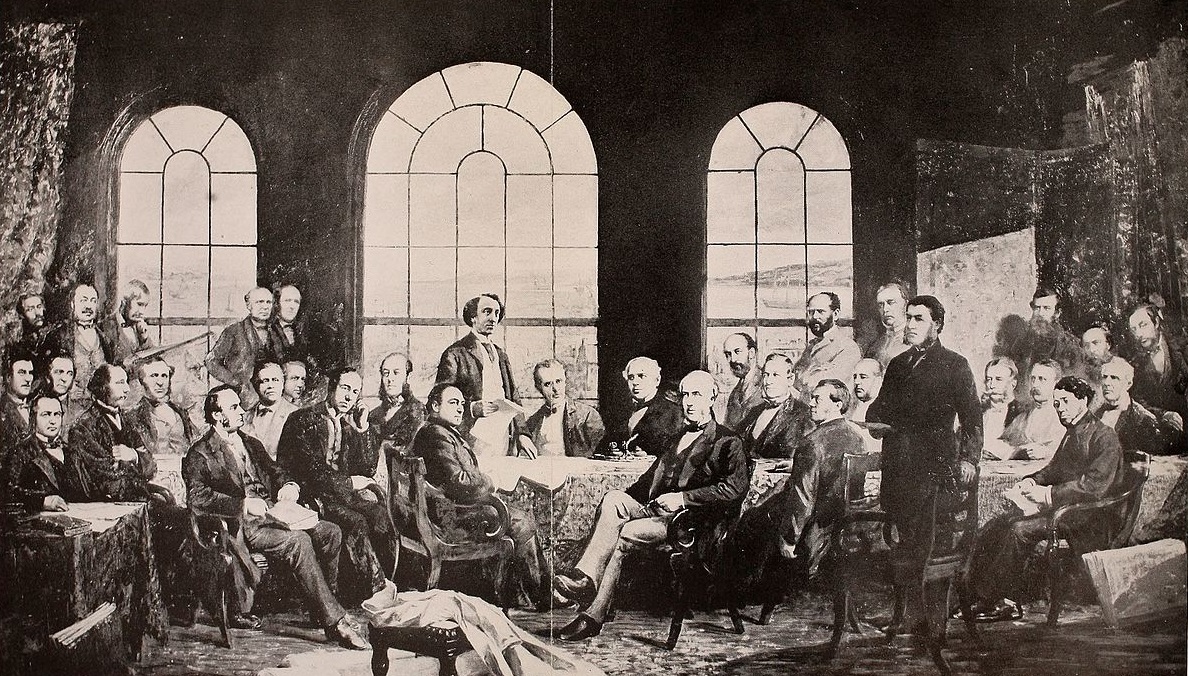 At the time of the transfer, the Dominion of Canada did not have any sort of presence in the western HBC territories. Inevitably, black market businessmen took advantage of the situation and filled the vacuum left by the HBC. Most of these opportunists were American whisky traders who travelled north in the aftermath of the Montana “Blackfoot wars”- which forced Montana’s South Peigan Blackfoot (the whisky trader’s primary customers) to migrate north across the 49th parallel- and the subsequent increase in American law enforcement. In no time, these whisky traders established a number of trading posts throughout the Canadian west- including Fort Whoop-Up (located in present-day Lethbridge) and Fort Standoff– at which they sold rotgut pseudo-whisky and repeating rifles to the local Blackfoot, Cree and Assiniboine. After five years of the illicit trade, the mighty Blackfoot and Iron Confederacies that once dominated the Canadian plains were reduced to scattered bands of paupers, starvelings and alcoholics.

The Canadian government became aware of the deplorable situation on the western frontier after reviewing the respective 1871 and 1872 reports of Lieutenant Butler and Colonel Robertson-Ross- government agents who were dispatched to western Canada to report on the conditions. On May 23, 1873 (coincidentally ten days before the Cypress Hills Massacre), Queen Victoria, on the advice of Canadian Prime Minister John A. Macdonald, passed a legislation enabling the formation of the North West Mounted Police (NWMP), a force of mounted riflemen that would bring law and order to the Canadian west.

After the Cypress Hills Massacre, recruiting for the NWMP began at once. The recruits- three hundred in all- assembled at Fort Dufferin, Manitoba, and on July 16, 1874, they began their grueling Great March West. The Mounties, burdened as they were with oxen, carts, cattle and machines, made slow time across the plains. They encountered all manner of prairie hazards, including sickness, thunderstorms, quicksand and low supplies. On August 25, they reached the Cypress Hills, a forested oasis in the badlands of southern Alberta, where they found clear water and grass for their animals and much-needed shade. They travelled west to the South Saskatchewan River before swinging north towards the confluence of the Bow and Oldman (then the Belly) Rivers, where they believed Fort Whoop-Up, the foremost whisky fort in Canada, to be. Instead of a whisky fort, the Mounties found three roofless log huts occasionally used by wolfers (Fort Whoop-Up was actually located at the forks of the 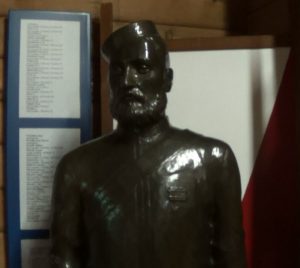 Oldman and St. Mary Rivers). Frustrated, they travelled south to Writing-On-Stone, the section of the Milk River Valley filled with strange hoodoos and mysterious Indian hieroglyphs overlooked by the Sweetgrass Hills. There, the force’s main body camped while Commissioner George French, Assistant Commissioner James Macleod, and a handful of officers rode south to Fort Benton, Montana, to get directions.

In Fort Benton, the Mounties met with Isaac Baker, the founder of the I.G. Baker Company, who had once reluctantly participated in the Canadian whisky trade in order to compete with his business rival Thomas Power (CEO of T.C. Power & Bro.; the main force behind the Montanan-Canadian whisky trade). Baker and his former partner, Charles Conrad (who had since purchased the business), suggested that the Mounties hire Jerry Potts as a guide. The Mounties took the suggestion and hired Potts, who led them and the main force to Fort Whoop-Up.

Upon inspecting Fort Whoop-Up, the Mounties found no cause to condemn it (the traders there, led by Dave Akers, were forewarned of the Mounties’ coming and had cached their whisky stock). They left the fort, travelled west up the Oldman River and, on the advice of Jerry Potts, built a fort on an island in the Oldman River about two miles downriver of the present-day town site. They named the post “Fort Macleod” in honour of Lieutenant-Colonel James Macleod, the NWMP Assistant Commissioner at the time. Due to flooding problems, the island fort was dismantled and rebuilt on the shore in 1884. The original fort, the Mounties’ first permanent post, would serve as the North West Mounted Police headquarters from 1876 until 1878 (when the headquarters were moved to Fort Walsh). In its lifetime, the original fort would see the suppression of the whisky trade and the trial of Star Child (a Blood brave suspected in the murder of Constable Graburn), while the second fort would see preparations for Colonel Sam Steele’s expedition to Galbraith’s Ferry, the formation and dispatch of the Rocky Mountain Rangers, the suppression of Metis revolutionary Louis Riel’s North West Rebellion, and the trial and execution of the Charcoal (a Blood fugitive who killed NWMP Sergeant William Wilde in 1896). 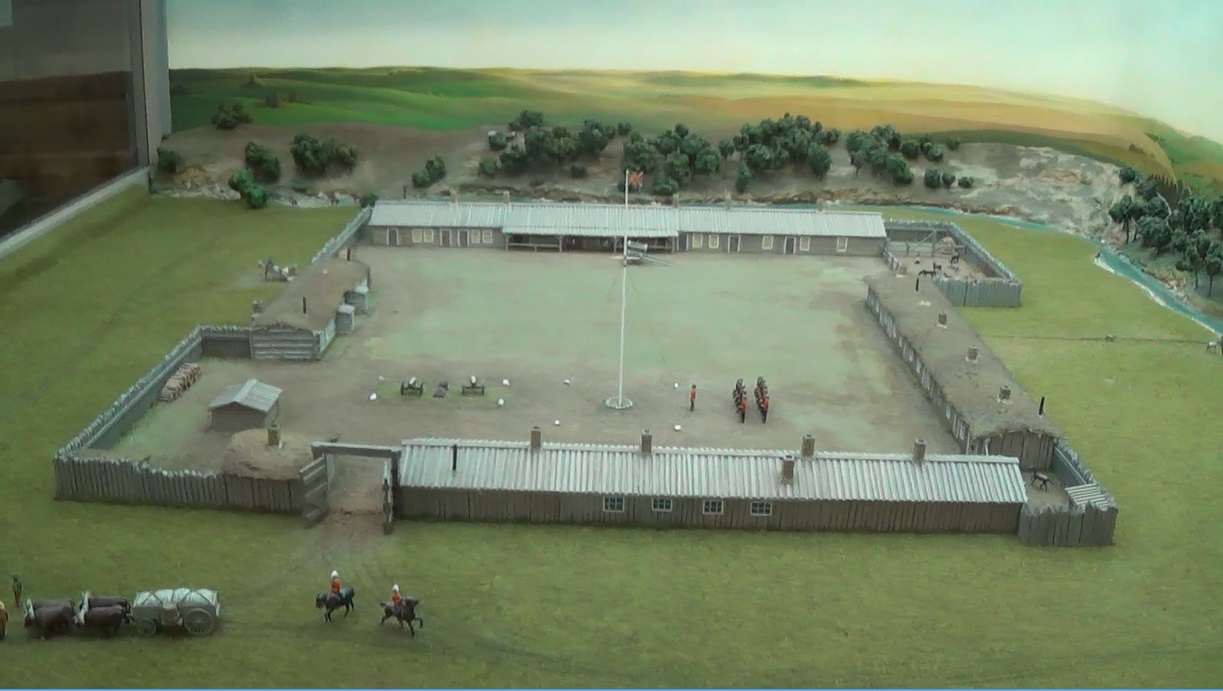 Today, the life-size replica of Fort Macleod, the Fort Macleod Fort Museum, can be divided into six sections: 1) The gift shop; 2) The museum; 3) The courtyard; 4) The fort rooms; 5) The First Nations Gallery; 6) The parade ground. 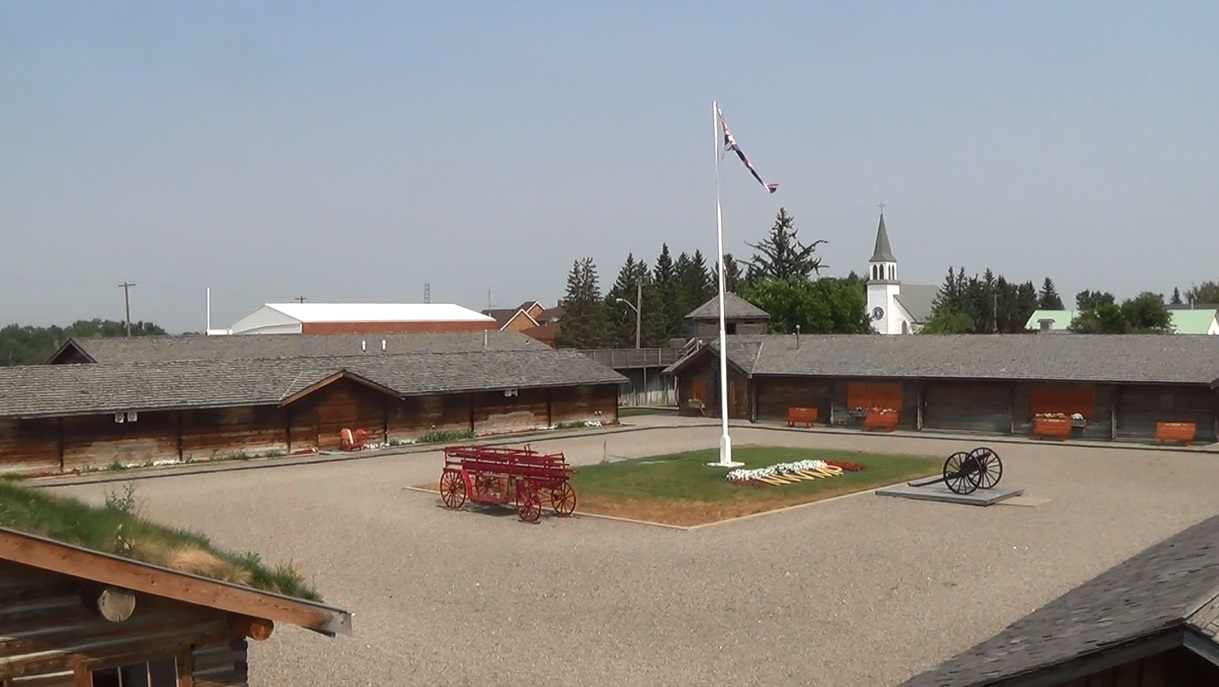 The first room inside the fort is the gift shop. Items for sale include historical books, locally-handcrafted native gifts and Mounty-themed souvenirs. Here, tourists can purchase admittance to the fort’s several interactive productions, and to the museum and the courtyard beyond. 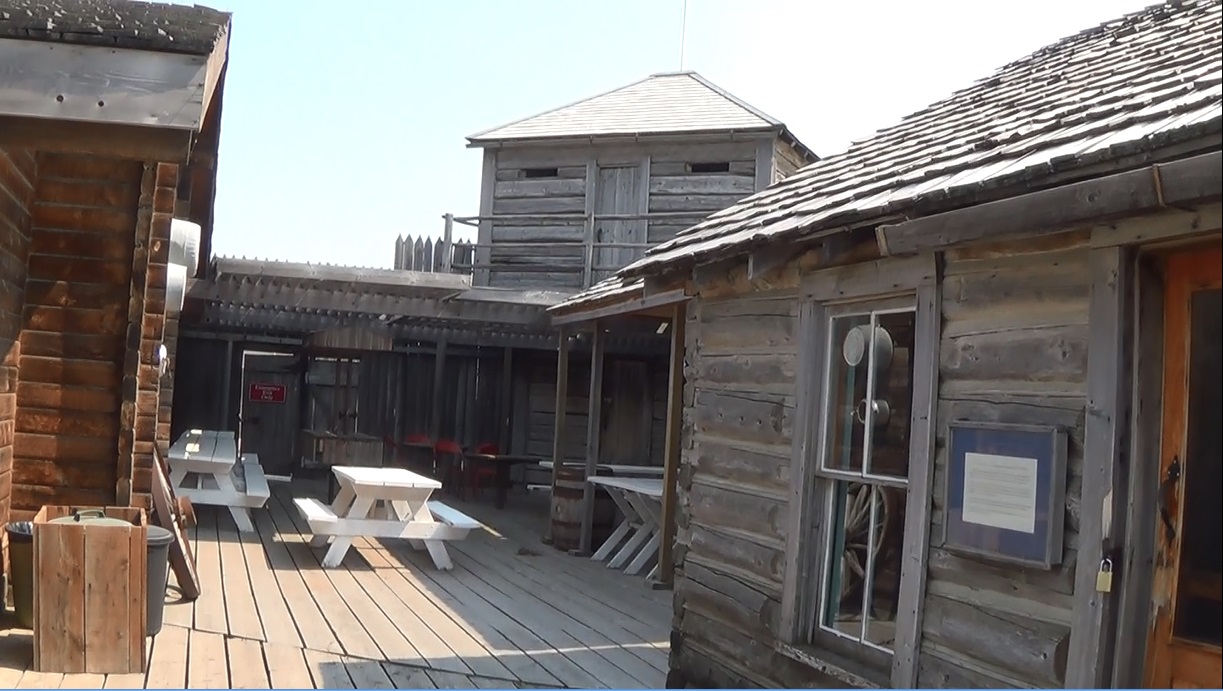 Just past the gift shop is the Fort Museum. This exhibition showcases the saddlery, uniforms, tools and weapons used by the early North West Mounted Police, and tells the stories of the Force’s most prominent characters, including the titular Lieutenant-Colonel James Macleod, legendary scout Jerry Potts, the eccentric Major James Walsh and the indefatigable Sergeant Major Sam Steele. The museum also displays miniature models of the original Fort Macleod, and the second fort built in 1884. 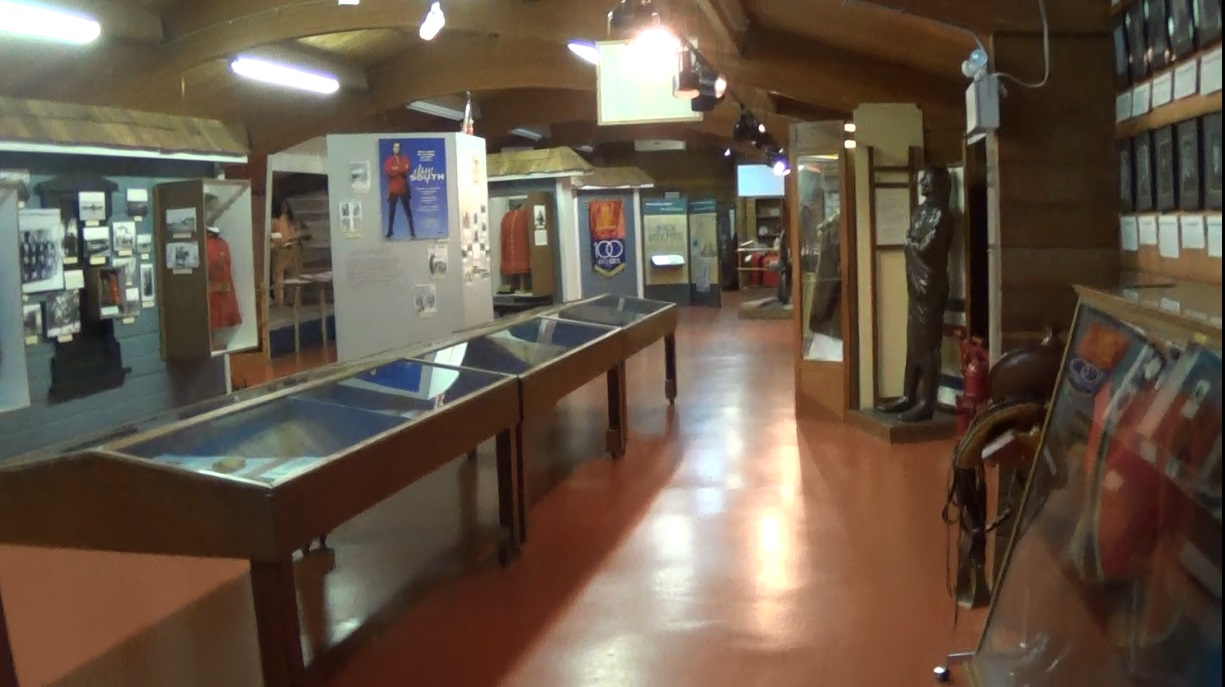 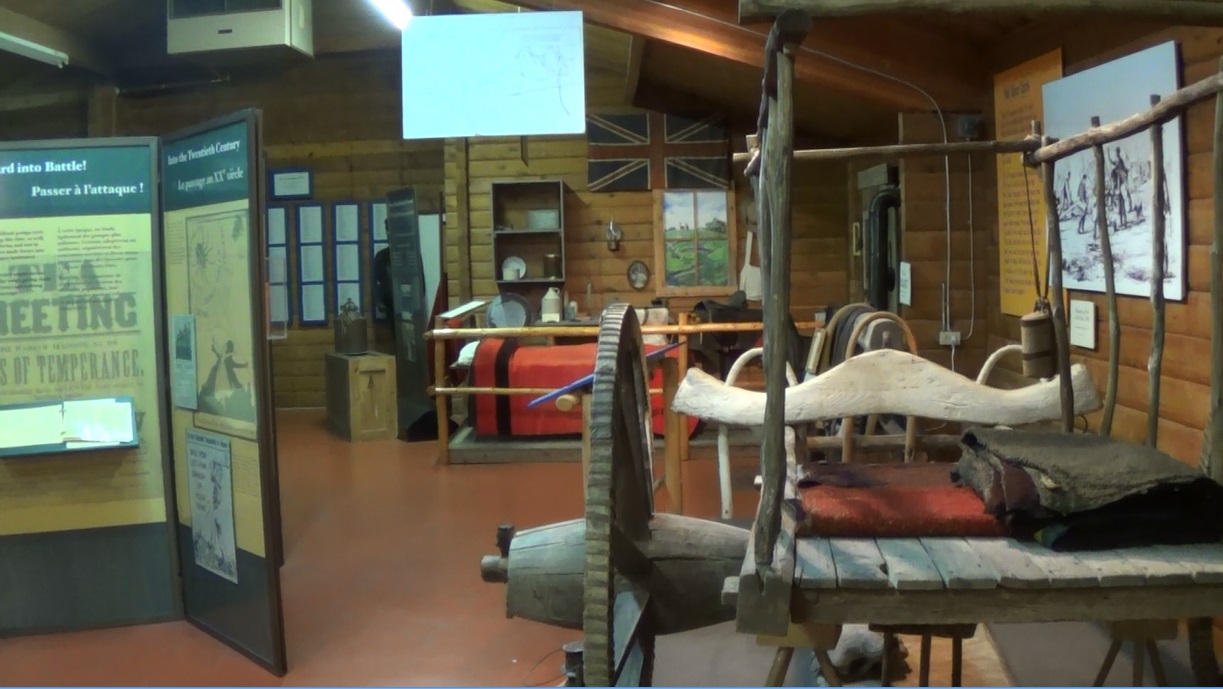 Beyond the main museum is the fort’s courtyard, a large gravelled square surrounded by the fort rooms, consolidated by a British Union Jack and nine-pounder cannon in the centre. 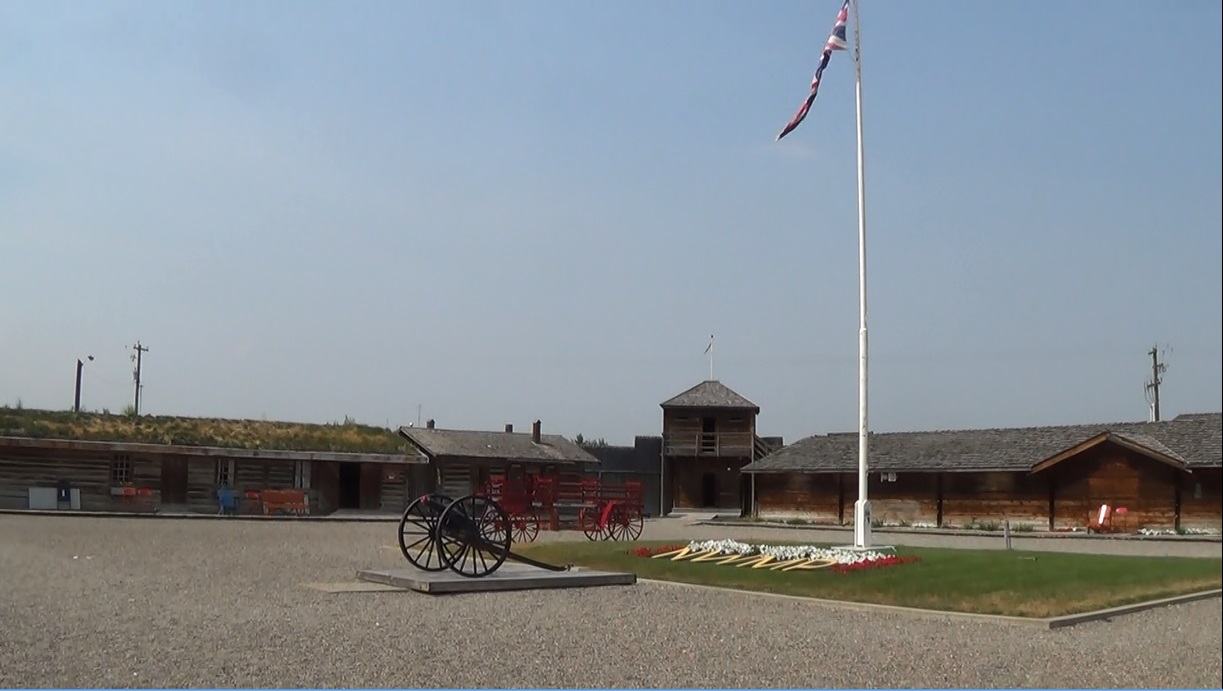 The fort rooms that surround the courtyard are filled with artifacts and accompanying descriptions that give visitors a glimpse into the life and duties of Canada’s first Mounties. Knowledgeable local guides in period garb patrol the grounds, ready explain the historical significance of any artifacts or events described on didactic labels. Among the fort rooms are the dispensary, the doctor’s office, a trade store, two fortified blockhouses, and the actual cabin of notorious whisky trader Fred Kanouse, the onetime partner of Kootenai Brown. 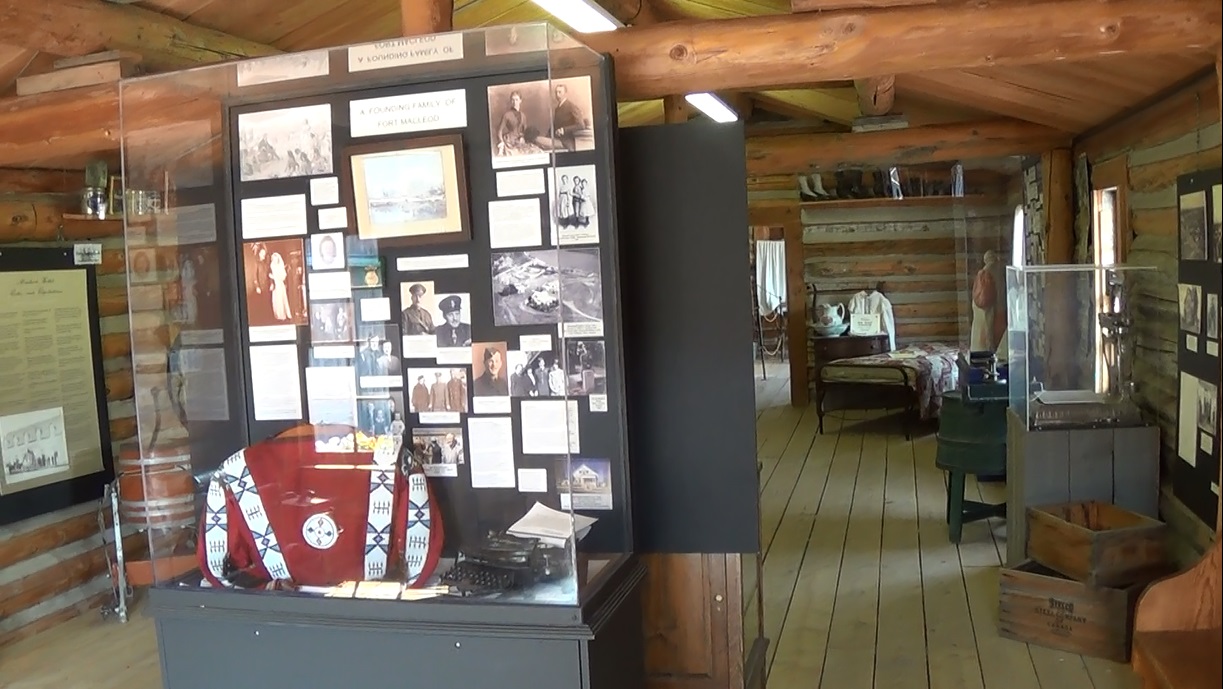 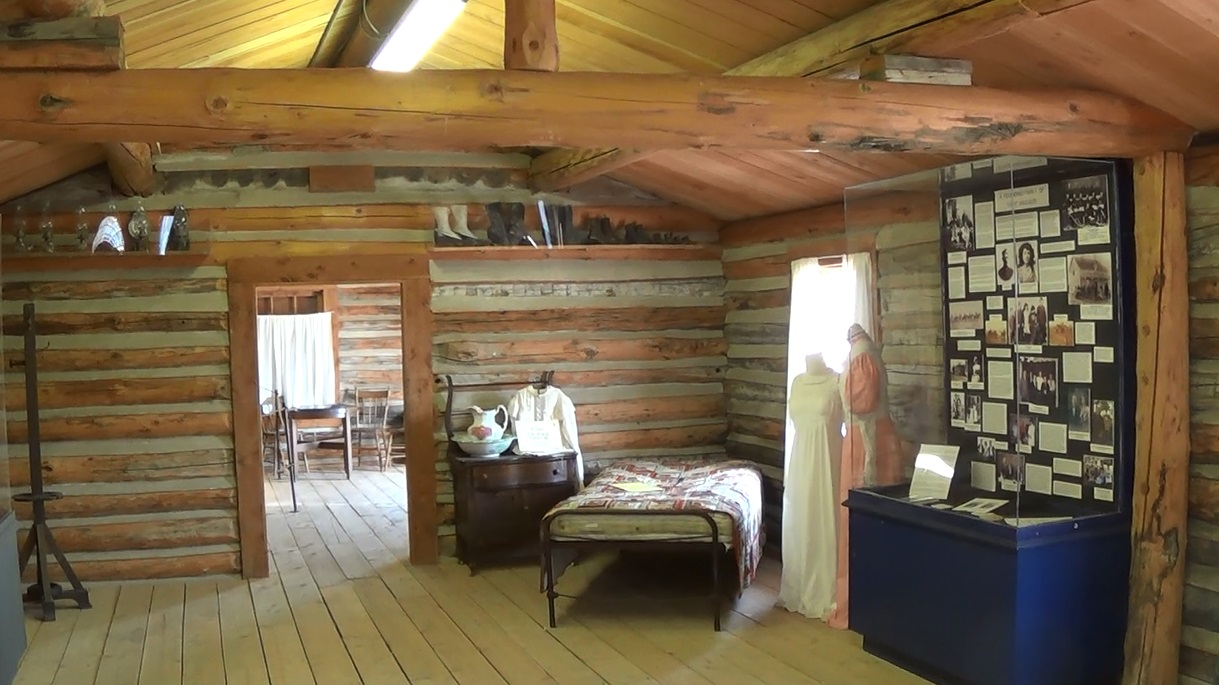 One of the fort rooms that deserves its own category is a small museum that I will call the First Nations Gallery. Immediately beyond the main entrance doors, visitors are greeted with an impressive miniature diorama of First Nations hunters luring a buffalo herd off a buffalo pound (ostensibly Head-Smashed-In Buffalo Jump, a famous buffalo jump located in the Porcupine Hills west of the fort). This gallery beyond displays a number of Blackfoot and Plains Cree artifacts. Paintings and accompanying descriptions tell the story of the friendly relationship that the North West Mounted Police established with the warlike Blackfoot, an impressive feat considering the Blackfoot’s longstanding animosity towards white Americans. Informational panels in the gallery describe how this rapport between Mounties and Blackfoot- in particular the friendship between Crowfoot, Head Chief of the Siksika (Blackfoot) Nation, and Commissioner James Macleod (who was promoted from Assistant Commissioner after the forced resignation of the forces first Commissioner, Major-General Sir George French, in 1876) – led to the signing of Treaty 7, an agreement between the Crown and the Blackfoot Confederacy that paved the way for peaceful settlement of the western Canadian frontier. 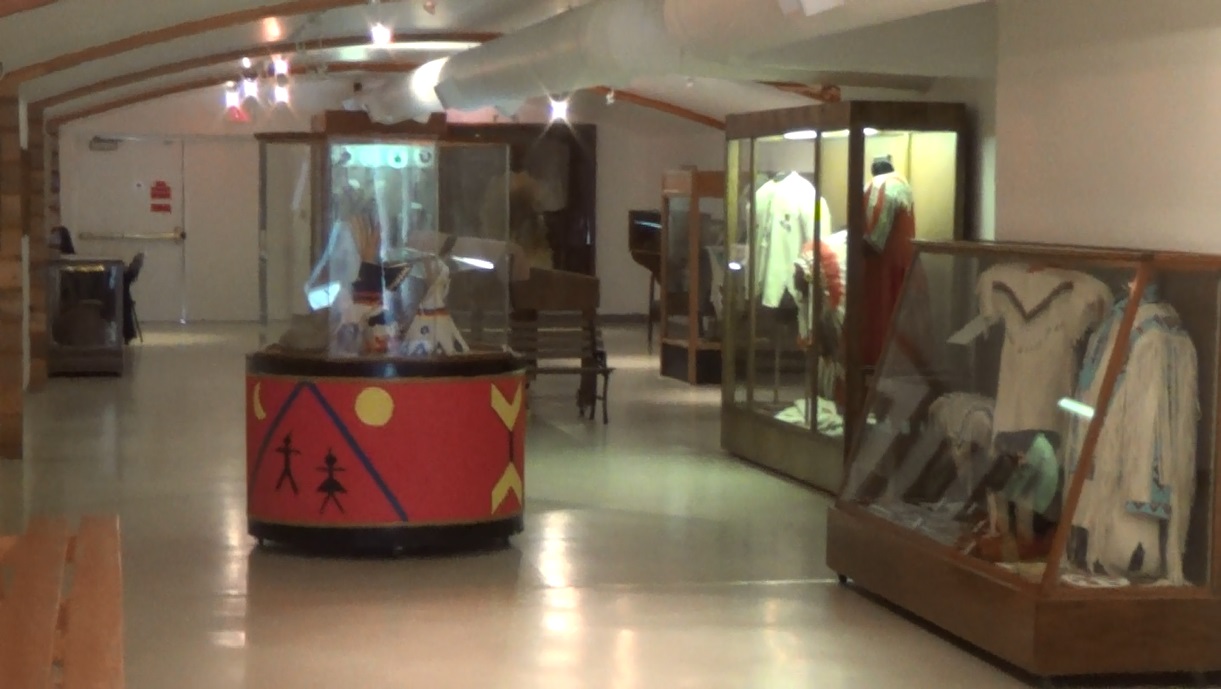 Adjacent to the First Nations Gallery is the theatre room. In the theatre, tourists can watch “The Great March,” a documentary recounting the 1870’s whisky trade in southern Alberta, the formation of the North West Mounted Police, and the Mounties’ Great March West. The theatre is also used for the daily (in May and June) performances of The Red Coats are Coming, a hilarious dramatization of early First Nations and Mounty culture. 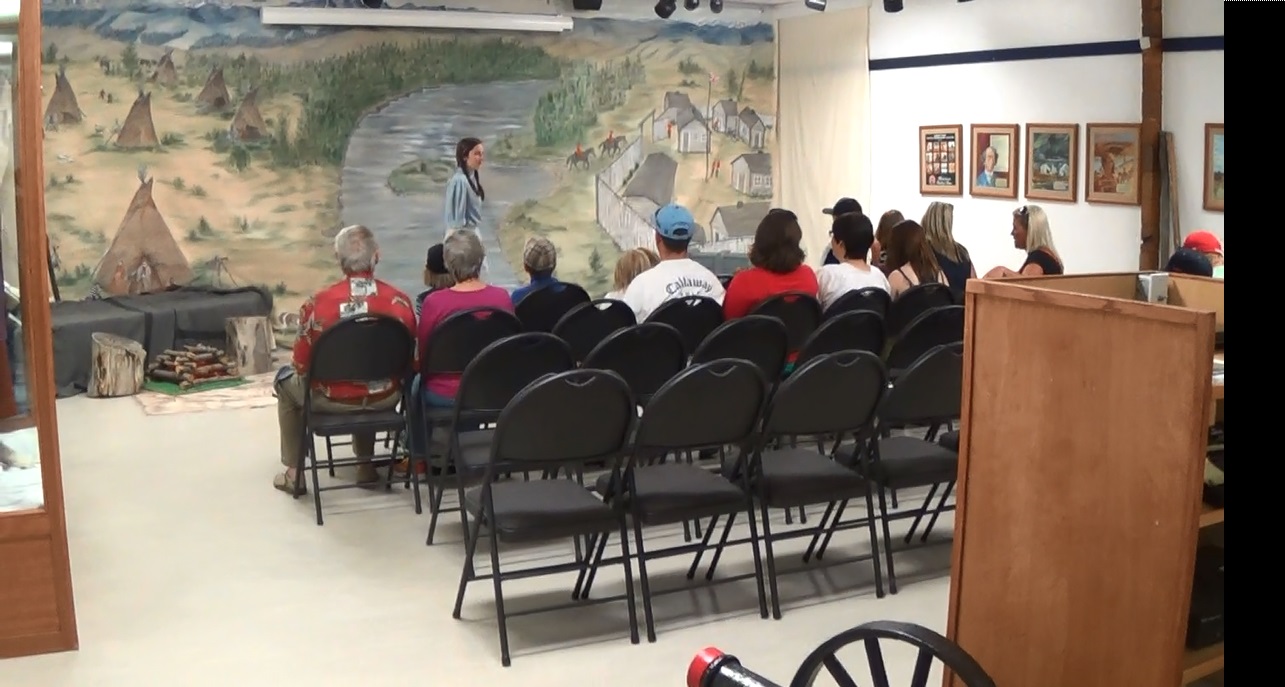 At the back of the fort, behind the gift shop yet still enclosed within the fort’s palisaded walls, are the stables and the parade ground. 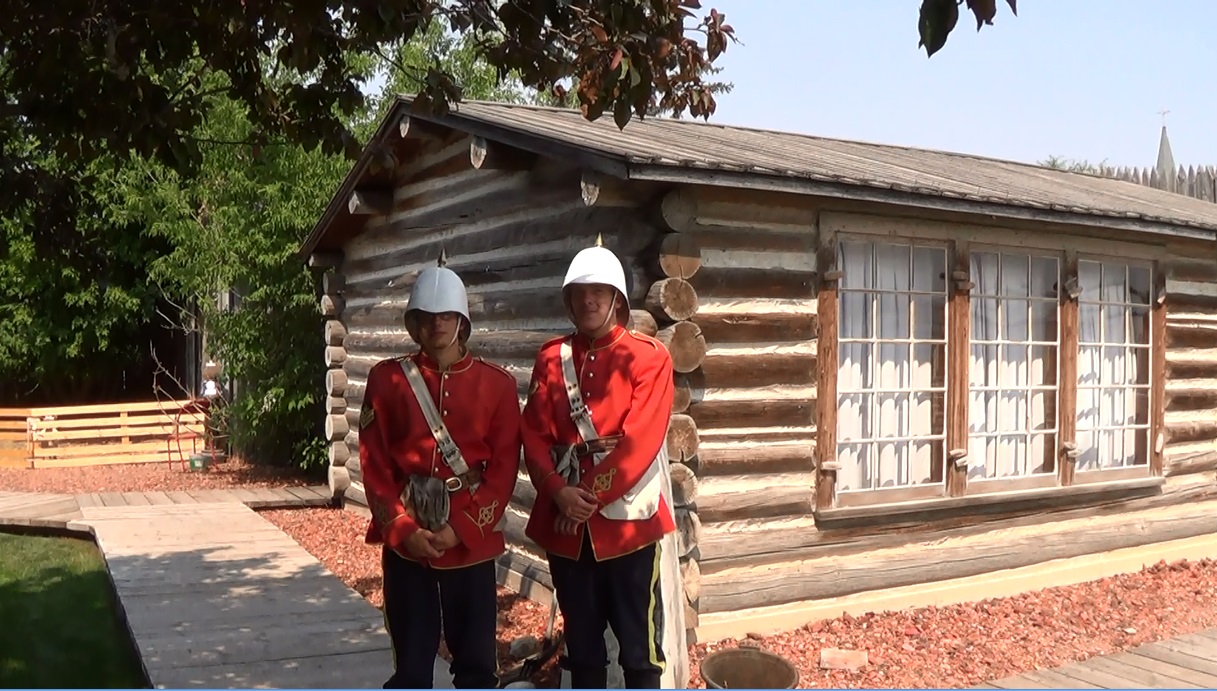 According to Mounty lore, the first NWMP riding demonstration, a lonely affair devoid of spectators, was conducted in 1876 in an effort to give the officers a much-needed break from routine. Today, this riding tradition lives on thanks to the NWMP Mounted Patrol Musical Ride, a riding display scheduled four times a day from July 1 until Labour Day weekend, performed to the accompaniment of bagpipes and Scottish tenor drums. 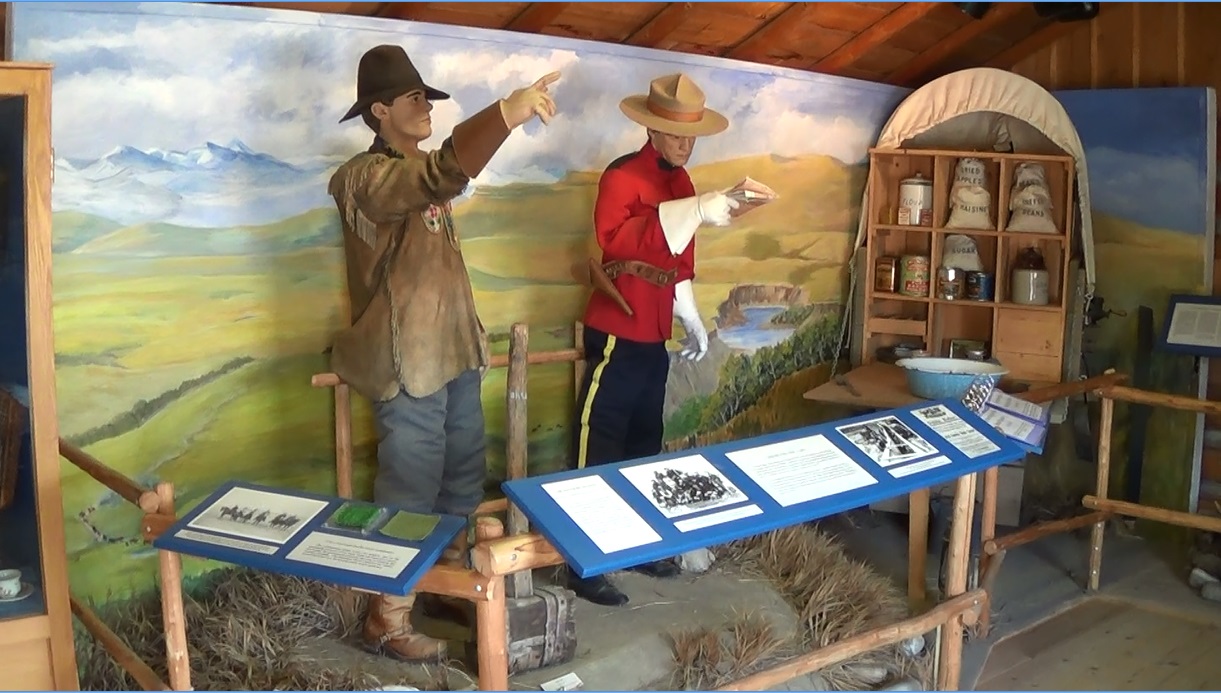