The Standoff at Whisky Gap 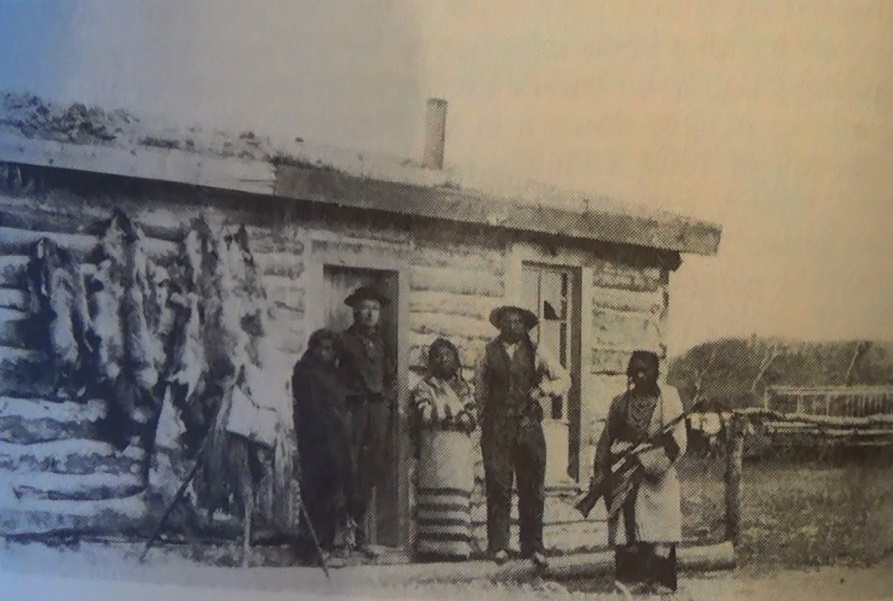 In the summer of 1871, in the aftermath of the success of newly-established Fort Whoop-Up, a number of traders from Fort Benton, Montana, flocked north across the border, hoping to profit in the burgeoning Canadian whisky trade. Two of these traders were Joseph Kipp and Charles Phillip Thomas, both American merchants with extensive knowledge of the Canadian frontier.

Kipp and Thomas, who had worked together in a 1868 prospecting expedition in the Canadian Rockies that brought them as far north as Fort Edmonton, partnered up in 1871 with the intention to build a whisky trading post in Canada. That summer, they outfitted themselves and hired eight men in Fort Benton. Their crew included Antoine Juneau, John Wren, a man named Lee, William McClure and John “Liver-Eating” Johnson.

Joe Kipp was born to James Kipp, the legendary Canadian-American fur trader, and Earth Woman, a Mandan woman, in North Dakota in 1849. He was known to the Blackfoot as Maistowun’opachis, or “Raven Quiver”; Asu’koyi, or “Bay Horse”; and Kih’pa, the Blackfoot version of “Kipp”. Kipp attended school in St. Joseph, Missouri, and worked for the company Caroll & Steell upon his graduation. In 1868, he prospected in the Canadian Rocky Mountains with Charles Thomas and John Wren. On their way south from Fort Edmonton, the northern terminus of their adventure, while camped near a creek at the entrance of the Crowsnest Pass, the three prospectors lost a valuable pair of pincers, used to trim horseshoes, in the creek. These pincers were found years later, in 1874, heavily rusted, by the North West Mounted Police after their famous march west. The NWMP named the creek Pincher Creek, which is the namesake of the present-day Albertan town through which it runs.

After returning from the prospecting venture to Montana, Kipp joined the American Army as a scout. Kipp scouted for a squadron of the Second Cavalry Regiment under the command of Major Eugene Baker, and was a key player in the disastrous Marias Massacre of 1870 in which several hundred friendly South Peigan were slaughtered. The Marias Massacre was the culmination of a decade of hostility between white Montanans and South Peigan Blackfoot known as the “Blackfoot wars”. Earlier, in 1869, Malcolm Clarke, a respected Montanan trader and rancher, was murdered by Owl Child, a young South Peigan warrior whom Clarke had publically humiliated. After the murder, Owl Chief fled north and joined Mountain Chief’s South Peigan Band. In retribution, the United States Army ordered Baker’s squadron to attack Mountain Chief’s band. On January 23, 1870, Baker’s cavalry squadron came upon a large Blackfoot camp. Assuming it to be Mountain Chief’s band, Baker ordered the attack. Kipp recognized that the camp didn’t belong to Mountain Chief but rather to Heavy Runner, a friendly South Peigan chief, and that it was a sick camp comprised of smallpox-ridden women, children, and old men. Kipp tried to prevent the attack, but was put under arrest by Baker, who was drunk at the time. The cavalry squadron proceeded to wipe out the camp, murdering around two hundred innocent South Peigan.

After the massacre, South Peigans threatened to kill Kipp for his involvement. In order to avoid trouble, Kipp went on another prospecting trip in Canada, and witnessed the establishment of Fort Whoop-Up and the beginnings of the Montanan whisky trade in what would become southern Alberta. Afterwards, he returned to Montana and partnered with Charles Thomas, determined to undertake a similar enterprise.

Charles “Charlie” Thomas, known to the Blackfoot as Poka-nikapi, or “Child Old Man”, was a Montanan trader who married a South Peigan woman named Mary, the daughter of a warrior named Full Eagle. He spent the winter of 1870/71 at Fort Whoop-Up, and was just as cognisant of the tremendous profits to be made in the Canadian whisky trade as was Kipp.

John “Liver-Eating” Johnson was one of the wildest participants in the Montanan-Canadian whisky trade. This American adventurer, born in New Jersey sometime in 1824 with the surname “Garrison”, lied about his age in order to serve aboard a fighting ship during the Mexican-American War (1846-1848). He deserted the American Navy after striking a superior officer and changed his name to John Johnson.

Johnson travelled west and prospected in the goldfields of Alder Gulch, Montana. During this time, Johnson became something of a frontier legend and the subject of many a story told around Montana campfires. According to one such tale, Johnson’s pregnant Montana Salish (in some stories Flathead) wife was killed in 1847 by a young Crow brave. Mad with grief, Johnson made the entire Crow Nation the target of his anguish and embarked a quarter-century-long warpath against them. Rumor had it that Johnson would cut out and eat the liver of every Crow warrior he killed, thereby earning his gruesome epithet.

Another tale about Johnson, sometimes ascribed to the frontier psychopath Boone Helm, maintains that he was ambushed and captured by a war party of Blackfoot one winter while trying to sell whisky to Flathead Idians. The Blackfoot intended to sell him to his enemies, the Crow. Johnson managed to escape his confines and cut off the leg of his young Blackfoot guard. He stole into the woods, subsisting off the Blackfoot’s leg, until he arrived at his friend’s cabin.

“He was a giant and a wonder in his way. I never saw a man like him. He had been a sailor and a whaler until he was forty years old and he came to me and I outfitted him. He was a man about 6 feet 2 inches and weighed about 250 pounds and did not have a bit of spare flesh on him. He was quite an offhand shot. We were corralling the Indians occasionally and he came and I quote, ‘I want to get my hand in. Break me in,’ and he would take an Indian by the nape of the neck and almost break his neck, you know.”

Eventually, Johnson made amends with the Crow. In 1864, he joined the Union Army and fought against the Confederates in the American Civil War. After a year of service, Johnson was discharged, and he returned to the western frontier and took part in the illicit Montanan whisky trade. It was during this time that Kipp and Thomas recruited him for their venture.

After arranging the supply of whisky- six hundred gallons which they hoped to sell to the Indians in Canada- Kipp and Thomas came to the attention of Deputy Marshall Charles D. Hard. According to James Willard Schultz, Kipp’s biographer, on the day that the traders and their crew were scheduled to depart for Canada, Deputy Marshall Hard paid Fort Benton an unexpected visit. Thomas and the crew quietly slipped out of Fort Benton that night, careful to not arouse Hard’s suspicions, while Kipp remained behind for a time in order to distract the lawman. Although most Fort Benton residents were privy to the mischief, no one reported the traders to Hard, as much of them similarly made their living in the illicit whisky trade.

For two days, Kipp remained in Fort Benton. When he was certain that Hard was unaware of his illicit venture, Kipp rode north and caught up with his crew, who were camped beside the Marias River. The next day, the crew reached Rocky Spring Ridge, and were approaching the Milk River south of its intersection with the 49th parallel, near what would become Whiskey Gap (a ghost town founded in the general location where whiskey traders hid three barrels of whisky to avoid imputation by the North West Mounted Police. The presumed stash has never been found) when they were accosted by Deputy Marshall Hard and Jesse Armitage, the Montana Territory Indian Agent, who had ridden north from Fort Benton. According to Schultz, Kipp’s biographer, the following conversation (which Hugh Demspey maintained likely took place between Hard and Johnson and not between Hard and Kipp) ensued:

“It looks to me,” said Kipp, “as if we had caught you. We’ve crossed the line and I will not turn back. And if you make us any trouble, or attempt to arrest us, just understand at once that you’ve got to do a lot of shooting.”

“What! Do you defy me? Me- a United States officer?”

“You’re no officer here; this is Canada. If it isn’t, just show us the line. That’s where we’ve got you, Hard, and you may as well stop bluffing. If we can’t prove that this particular place is in Canada, you can’t prove that it isn’t’. If you arrested us and took us back, our case would be thrown out of court, and you know it.”

“Well,” Hard said, “I’ll turn back. You will be sneaking more whiskey out this way, and I’ll be on hand; I’ll catch you yet.”

In his narration, Schultz omitted the fact that the whisky traders were well within American territory, and that each of them, in the confrontation, raised their Henry rifles to stand off the Deputy Marshal.

After the standoff, the whisky traders travelled north to the confluence of the Oldman and Waterton Rivers, and proceeded to build their fort from dirt, mud and river valley timber. Kipp and Thomas christened their post “Fort Standoff” to commemorate their standoff with the Deputy Marshal.

Although Fort Standoff garnered an impressive profit that season, Kipp and Thomas soon realized that they should have built their fort a few miles downstream, giving them better access to the Blood winter camp erected along the Belly River (the camp that had been attacked the previous winter by Cree in the Battle of Belly River). The fort they built at the superior location the following year they called “Fort Kipp”.

In 1871, John “Liver-Eating” Johnson was arrested by Deputy Marshall Hard and charged with resisting a United States officer. He was the only trader involved in the standoff to meet justice.