The Adventures of Paul Kane: Part I 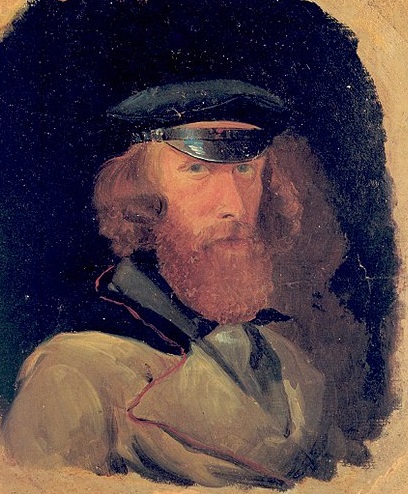 Paul Kane was born in County Cork, Ireland, on September 3rd, 1810, into a family of ten. When he was about ten years old, his family moved to York, Upper Canada (present-day Toronto, Ontario), where Kane’s father, a former British Royal Army cavalryman, took up a new profession as a liquor merchant.

When he was about twenty years old, Paul Kane attended Upper Canada College. There, one of the disciplines he studied was painting- a subject in which he excelled.

In July 1834, some of Kane’s paintings, entitled “Harlich Castle and Sistant View of Snowden N. Wales” and “Lake George after Drury”, were displayed in an exhibition hosted by the Society of Artists and Amateurs in Toronto. Specifically, Kane’s contributions included:

An article in the July 4th, 1834 issue of the Toronto-based magazine The Patriot praised Kane’s landscape paintings, as well as those produced by artists Thomas Dixcee and James Hamilton, as possessing “all the freshness and beauties of Nature”. Later articles described Kane’s Harlich Castle and Lake George as being “very agreeable pictures”; his Residence of John Gamble as possessing “much truth to nature” and being “tenderly penciled”; and his Falls of Tivoli as having “great merit in many of its parts”, including the liveliness of its figures, concluding that “practice and study would make Mr. Kane an artist of name”.

Later that year, Kane moved to the town of Cobourg, Ontario, where he was employed by a furniture factory called Freeman Schermerhorn Clench as a furniture decorator. In 1836, Kane moved to Detroit, Michigan, where a celebrated American painted named James Bowman convinced that, if he hoped to further his career as an artist, he ought to study art in Europe. Since Kane did not have the money at that time to pay for passage across the Atlantic, he contented himself with travelling down the Mississippi to New Orleans, during which time he supported himself by working as a portrait painter. In early 1840, while in Alabama, he painted engraving-based portraits of Queen Victoria and U.S. President General William Henry Harrison, both of which enjoyed critical acclaim.

In the spring of 1842, Paul Kane, having accrued sufficient funds, book passage aboard a ship in New Orleans and travelled to Marseilles, France, where he began his Grand Tour of Europe. For the next two years, he travelled throughout Italy, visiting Genoa, Florence, Naples, and Rome, studying the paintings and sculptures of master Renaissance artists like Raphael, Murillo, and Donatello. After travelling through Swizterland and France, Kane decided to spend a winter in London, England, There, he met George Catlin, an American artist who had spent the past decade travelling along the Mississippi and Missouri Rivers, painting the Native Americans he met along the way, and who was in London for the purpose of advertising his collection to prospective European patrons. Many of the subjects of Catlin’s paintings- particularly those belonging to the tribes of the upper Missouri- had only recently been introduced to white men and Euro-American culture, and  practiced an ancient way of life which Catlin suspected was fast-disappearing. Catlin believed that it was the artist’s duty to illustrate these dying cultures for posterity, and included that thesis in his 1851 book Letters and notes on the manners, customs and conditions of the North American Indians, in which he detailed his adventures in the American West.

Inspired by Catlin, Kane decided to undertake a similar project in Canada. After earning enough money to pay some debts he had accrued in Europe, he returned to Toronto in the winter of 1844-45. Equipping himself with a diary, a sketchbook, a box of paint, a gun, and a stock of ammunition, he departed from Toronto on June 17, 1845, with the intention of travelling to the Pacific coast. He would later describe his adventures in his 1859 book Wanderings of an Artist Among the Indians of North America, from Canada to Vancouver’s Island and Oregon, Through the Hudson’s Bay Company’s Territory and Back Again, which he based on his travel journal.

First, Paul Kane travelled northwest overland to Orillia, situated on the northwestern shores of Lake Simcoe. From there, he travelled by steamer and Indian canoe into Georgian Bay and southwest to the Ojibwa village of Saugeen, located on the eastern shores of Lake Huron. There, Kane sketched portraits of the head chief, who was called Maticwaub, or “Bow”; a sub-chief named Muskuhnoonjee, or “Big Pike”; the daughter of a chief from Lake St. Clair, who was reluctant to sit for the portrait due to her belief that the one who possessed her picture would have power over her; and an old Indian from Owen Sound named Wah-pus, or “Rabbit”.

After staying at Saugeen for ten days, Kane, accompanied by a man named Dillon, travelled up Lake Huron to Manitoulin Island. After taking on provisions at a village called Penetanguishene, Kane and his companion “threaded a labyrinth of islands of every size and form, amounting, as it is said, to upwards of 30,000; and both being strangers to the navigation, we continually lost ourselves in its picturesque mazes, enchanted with the beauty of the very-varying scenery, as we glided along in our light canoe.”

Kane and Dillion continued on to the village of Manitowaning, on Manitoulin Island, where they met with the village chief, “an acute and intelligent Indian” named Sigennok, or “Blackbird”. Captain Anderson, the local Indian Agent, informed Kane that Sigennok was once addicted to liquor, and would routinely drink himself into a violent mania, in which state he terrorized anyone who crossed his path. During one of Sigennok’s drinking bouts twenty three years earlier, Captain Anderson plied him with so much liquor that he slipped into a stupor. While the chief lay senseless, Anderson bound him hand and feet and asked a young Indian boy to watch over him, and to inform him when he awoke. The boy did as requested, and when Sigennok finally came to and demanded to know who had tied him, Captain Anderson lied that the young boy had done so at his request. He proceeded to berate the chief for his moral weakness, his indulgence of which had put him at the mercy of the smallest and weakest member of his band. Thoroughly shamed by the experience, Sigennok vowed to never drink again. True to his word, the chief had never touched a drop of liquor since.

Continued in The Adventures of Paul Kane: Part 2.