Back to The Adventures of Paul Kane: Part 1.

The Adventures of Paul Kane: Part 2

During Kane’s stay at Minitowaning, Indians from all over the Great Lakes assembled at the village to take part in an annual gathering. One of the visiting chiefs, whose “venerable and dignified appearance” made an impression on Kane, was a great medicine man named Shawwanossoway, or “One with his Face towards the West”. The artist learned that Shawwanossoway was once an accomplished war chief, but that he had exchanged the tomahawk of the warrior for the rattle of the shaman years ago, on account of a tragedy in which he played a central role.

Many years ago, so the story goes, a beautiful Ojibwa girl named Awh-mid-way, or “There is Music in her Footsteps”, lived with her family on the shores of one of the Great Lakes. Awhmidway was in love with a young warrior named Muck-e-tick-enow, or “Black Eagle”, who returned her affections. “In accordance with the customs of her people,” Kane wrote, “she had unhesitatingly extinguished the blazing bark which he had sent floating down the stream that glided past her lodge, and thus acknowledged him as her accepted lover.” 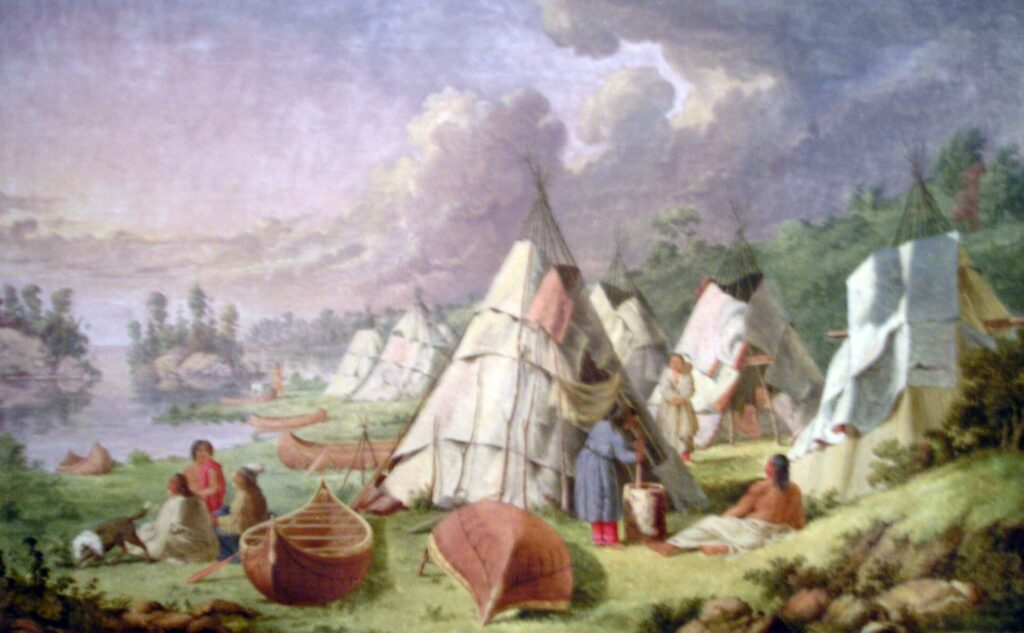 Eager to make Awhmidway his bride, Black Eagle went on a hunting trip in search of especially delicious game, which he would present to Awhmidway’s father as a bridal token, in accordance with Ojibwa custom.

During Black Eagle’s absence, Shawwanossoway- in those days, a renowned war chief- visited Awhmidway’s village and was instantly smitten by Black Eagle’s beautiful fiancé. Shawwanossoway did everything he could to win the maiden’s affection, but to no avail; the girl remained faithful to her absent betrothed, expecting him to return any day to rescue her from the unwanted suitor. When Shawwanossoway learned the reason behind Awhmidway’s stubborn repudiations, he set off into the woods, discovered the camp of Black Eagle, and murdered his rival by shooting him in the back. He then stole the choice game that Black Eagle had acquired and presented it to Awhmidway’s father.

Pleased with the gift, and impressed by Shawwanossoway’s fearsome reputation as a warrior, Awhmidway’s parents urged their daughter to accept the chief’s marriage proposal. Succumbing to the pressure, Awhmidway reluctantly acquiesced, hoping that Black Eagle, of whose death she was unaware, would return to save her before the wedding feast.

On the day on which she was to become Shawwanossoway’s bride, Awmidway escaped in the bridal canoe, in which she and her husband were to embark following the feast. Shawwanossoway tracked down his wife-to-be and, swimming out to her canoe, implored her to return with him to the village. His entreaty fell on deaf ears. The girl and her pursuer travelled throughout the night, in the midst of which, on account of the darkness, the chief lost track of his quarry. The following morning, Shawwanossoway found Awmidway’s red and ragged remains on the shore, scattered amidst a profusion of wolf tracks. Distraught by the death of his love, and furious that his violent conduct had contributed to it, Shawwanossoway resolved to renounce his warlike ways and pursue the path of a medicine man. 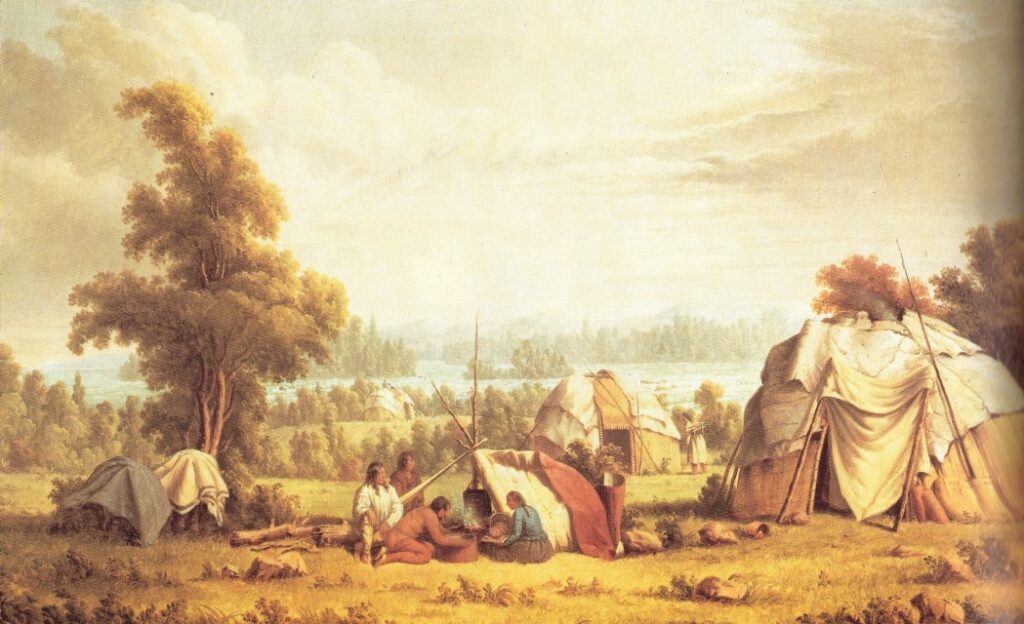 Paul Kane remained on Manitoulin Island for two weeks before taking a steamer to Sault Ste. Marie, at the junction of Lakes Huron and Michigan. There, he met with Mr. Ballantyne, the Hudson’s Bay Company factor at Sault Ste. Marie, who advised Kane against travelling into the interior of the continent alone, instead encouraging him to accompany a Hudson’s Bay Company canoe brigade the next year. “Hoping that, by following this advice,” Kane wrote, “I should be able to travel further, and see more of the wilder tribes, I determined upon confining my travels for the present to a mere summer campaign.”

After spending a few days in Sault Ste. Marie, Kane travelled to the southerly Mackinac Island, where several large bands of Ottawa and Ojibwa had set up camp. On one occasion, Kane returned to his tent to find an Indian dog in the process of devouring his cargo. When the painter shot and killed the animal with his pistol, its owners demanded that he compensate them for it. Kane settled his debt with the family, demanding that they also repay him for the losses their dog had inflicted upon him, and accepted an invitation by that same family later that night to partake in a feast consisting of the dog he had killed.

Kane stayed at Mackinac Island for three weeks before proceeding to Green Bay. From there, he accompanied a U.S. Indian Agent up the Fox River to Menominee Indian village on the shores of Lake Winnibego. On the way, he made an illustration of Menominee fishermen spear fishing on the Fox River at night, attracting fish to their canoes by hanging iron-framed torches, which he called “jack-lights”, over the bow. Kane spent three weeks in the Menominee camp, spending his time sketching chiefs, elders, other interesting characters, before making the journey back to Toronto. 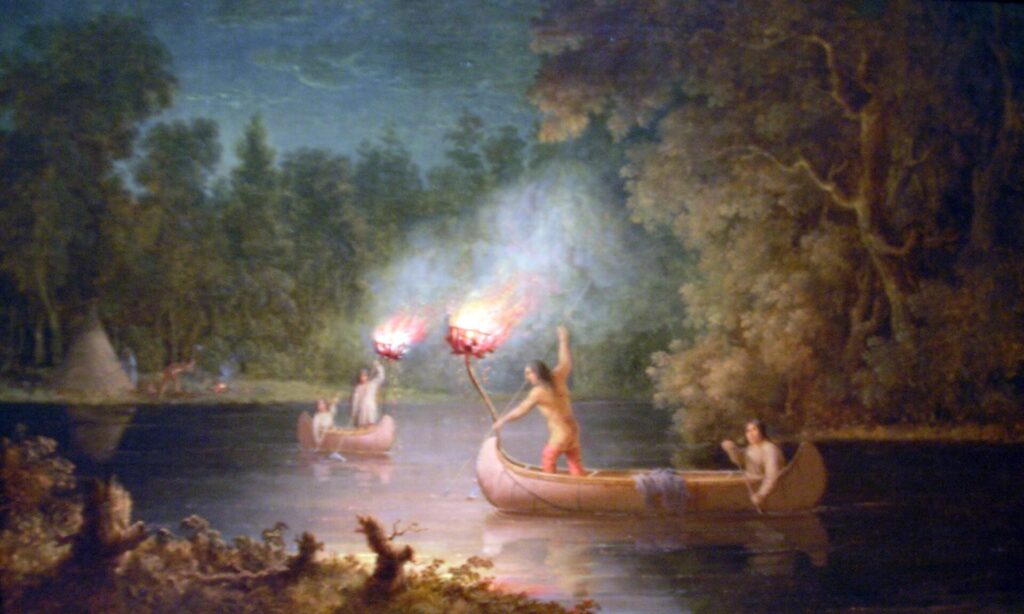 Continued in The Adventures of Paul Kane: Part 3.