The following is a plot summary and analysis of Season 7, Episode 10 of the History Channel’s TV series The Curse of Oak Island.

The episode begins at the bump-out area of the Smith’s Cove cofferdam, where the boys discovered the wharf-like structure the previous episode. Rick Lagina, Gary Drayton, and Peter Fornetti make a cursory examination of the partially-uncovered structure and fail to find any Roman numerals carved into it, Roman numerals being the markings that were found inscribed on the U-shaped structure. Archaeologist Laird Niven then arrives on the scene and examines the object. “My initial impression,” says Niven, “is that I would associate that with the slipway.” The archaeologist gives the treasure hunters the green light to hand-excavate the structure and search for any artifacts that might be found on top of or around it.

Before proceeding with the excavation, Gary Drayton scans the structure and its vicinity with his metal detector. In doing so, he comes across a strip of metal, which he suspects might be silver, perforated by a single hole. “It looks like some kind of silver tag,” he ventures, before suggestion a potential connection between this object and the lead cross he discovered on the Smith’s Cove beach back in Season 5, Episode 10.

Meanwhile, Craig Tester, Jack Begley, and Scott Barlow begin draining the Oak Island swamp, having obtained permits from the provincial government to excavate certain areas of interest within the wetland. The next day, Rick Lagina and Tom Nolan meet at the swamp with John Skierka of Great Excavations Inc. We learn that the treasure hunters are considering hiring Skierka to excavate their areas of interest in the swamp, apparently having disposed of the services of contractor Shawn Wilson, whom they invited to perform a similar job through the use of a “trench cage”, or “dig box”, back in Season 7, Episode 3. Skierka informs the team that he plans to excavate the areas of interest with a “swamp excavator”- a specialized piece of heavy equipment specifically designed for use in swamp-like environments.

Later, the Oak Island team meets in the War Room and calls up Dr. Christa Brosseau of Halifax’s St. Mary’s University, who has analyzed the silver tag that Gary Drayton found near the wharf-like object in Smith’s Cove. Dr. Brosseau informs the crew that the object is not composed of silver or pewter as Gary Drayton initially suspected, but rather of impure lead alloyed with small amounts of tin and antimony. She further states that tin and antimony are commonly found in ancient lead objects, and suggests that the trace metals might have been added intentionally in order to improve the lead’s durability. Dr. Brosseau then advises that, if the team wants to learn more about the artifact, they ought to subject it to a laser ablation test (similar to that carried out on the lead cross by Dr. Chris McFarlane of the University of New Brunswick back in the Season 6 premiere), which will determine its isotopic signature.

Meanwhile, Dave Blankenship, Dan Henskee, Doug Crowell, and Terry Matheson meet at the Money Pit area, where Choice Drilling is busy sinking an exploratory drillhole called FG-13 in search of a second piece of the Shaft 2 tunnel. Sure enough, while examining a core sample taken from a depth of 98.5-108.5 feet, the treasure hunters find a large piece of hand-sawn lumber, which they hope constitutes the coveted second piece of the tunnel in question. Matheson also points out layers of sand and clay within the core sample, which he says would make a perfect conduit for water from the Smith’s Cove flood tunnel to the Shaft 2 tunnel. The narrator then reminds us of the sand the crew discovered in a 99-109-foot core sample taken from a hole drilled in the Cave-In Pit area back in Season 7, Episode 5, and of the theory introduced in that episode that the sand might constitute the remains of the Smith’s Cove flood tunnel. 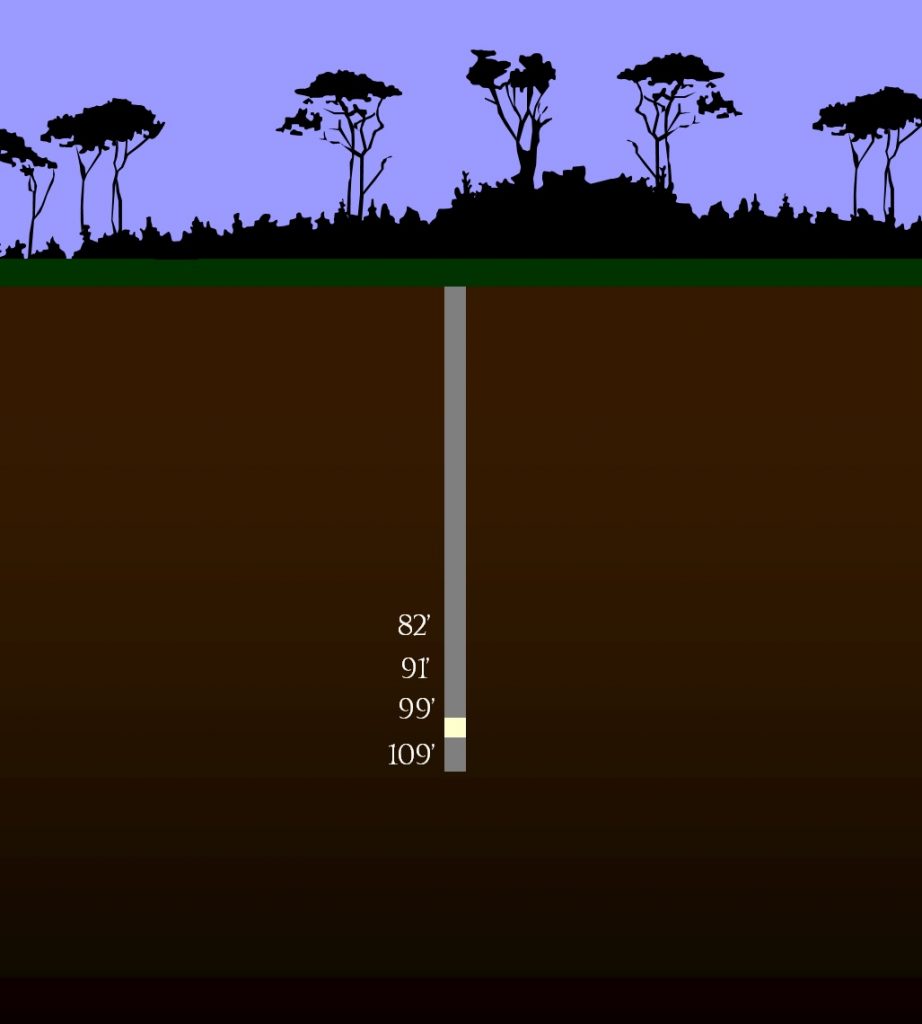 The treasure hunters are soon joined by Rick, Marty, and Alex Lagina, who congratulate them on their success in determining the orientation of the Shaft 2 tunnel. In a later interview, Marty remarks upon the layer of sand that Terry Matheson identified in the FG-13 core sample and explains that the geologist believes the sand to be naturally-occurring material which facilitated the flooding of the Shaft 2 tunnel back in 1805. Marty also expresses his own opinion that the sand may have been placed intentionally by the creators of the Smith’s Cove flood tunnel, as “sand will transmit a lot of water”. Back at the Money Pit site, the treasure hunters agree to sink one more hole in order to further confirm that they have indeed determined location and orientation of the Shaft 2 tunnel.

The next morning, the Fellowship in the Dig meets in the War Room with Dr. Chris McFarlane, the geochemistry professor who conducted the laser ablation test of the lead cross back in the Season 6 premiere. McFarlane, who has conducted a similar test on the lead tag recently discovered beneath Smith’s Cove, informs the team that the tag has the highest tin ratio he has ever seen in a lead artifact. He then discloses that “the slipway artifact is clearly not of North American origin,” and suggests that the lead of which it is comprised was probably mined somewhere in the Mediterranean regions of Italy, France, or Spain.

Later, the boys head to the Oak Island swamp, which is now almost entirely drained. Heavy equipment operator Billy Gerhardt gets into the driver’s seat of John Skierka’s swamp excavator Marty Lagina comes along for the ride. Gerhardt drives the excavator to the so-called “paved wharf”- a pattern of stones which Tony Sampson discovered on the swamp floor back in Season 7, Episode 1. The episode ends as the treasure hunters begin excavating the area.

In this episode, Gary Drayton discovered a tag-like strip of metal in Smith’s Cove near the wharf-like structure discovered the previous episode. Although Drayton initially suspected the artifact to be made of lead, Dr. Christa Brosseau determined that it was made of impure lead alloyed with 2% tin and 2% antimony.

Dr. Chris McFarlane later conducted a laser ablation test on the object and determined that the lead from which it is comprised was likely mined somewhere in the Mediterranean regions of Spain, France, or Italy. McFarlane also stated that the artifact possessed a higher concentration of tin than any other lead object he has analyzed.