The following is a Plot Summary and Analysis of Season 5, Episode 2 of the History Channel’s TV series The Curse of Oak Island.

Rick and Marty Lagina, Craig Tester, and Charles Barkhouse lead a portable drilling rig across the Oak Island causeway to the Money Pit area. In an interview, the Lagina brothers evince their enthusiasm for the upcoming 40-hole drilling operation, which, it is revealed, will be “the singular focus” of the season. Rick is confident that, if conducted without mishap, the operation will yield something significant within 20 days. Referring to the two-century-long Oak Island treasure hunt, Marty says, “I always felt like the Money Pit was where it began and the Money Pit is probably where it will end.”

At the Money Pit area, the treasure hunters meet with Kyle Fetterly and his Brewster Drill Team, the men who will be conducting the drilling operation. 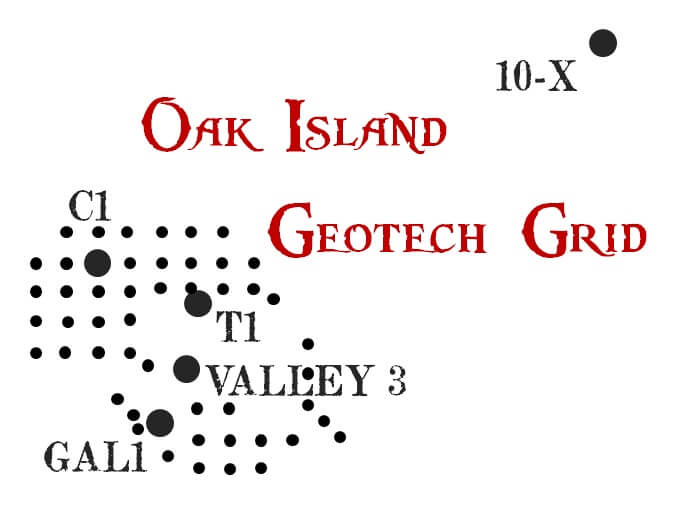 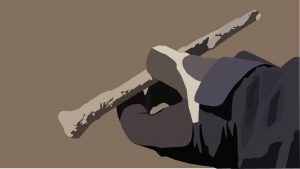 The next day, while the drillers set about their task, Rick and Marty Lagina and Craig Tester drive to Saint Mary’s University in nearby Halifax, Nova Scotia. There, they meet with Dr. Christa Brosseau, an Associate Professor of Chemistry who, in the narrator’s words, is considered to be “one of Canada’s leading experts in the study of metals and their chemical compositions.” The treasure hunters present Brosseau with the rose head nail they discovered in the GAL1 spoils the previous episode. Brosseau, in turn, takes the nail to a lab, where research instrument technician Dr. Xiang Yang places a sample of it under an electron microscope. Before the two scientists examine the metal, Brosseau explains that the presence of nickle and molybdenum in an iron object is indicative of that object’s being crafted sometime after 1860, while a concentration of manganese between 0.2% and 1% suggests that the object was crafted sometime after 1840. Brosseau and Yang then examine the metal of the rose head nail and conclude that it is composed of 90% iron and 10% carbon; that it bears no significant trace of nickle, molybdenum, or manganese; and that does not display any characteristic of a modern iron object. Upon being prompted by Craig Tester, Brosseau confirms that absence of sulfur in the piece suggests that it was smelted with charcoal, an ancient reducing agent. All things considered, the results of the metallurgical examination indicate that the rose head nail is at least several hundred years old. 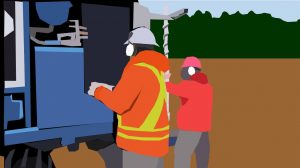 Later, Rick, Marty, and Charles meet with geologist Terry Matheson at the Money Pit area while the Brewster Drill Team goes about its work. In an interview, Marty explains that Matheson will collect, examine, and analyse core samples brought up the Money Pit drill holes at 5-foot intervals. The narrator reveals that other samples will be separated and spread out on a prospecting device called a shaker table. From one such sample, taken from a depth of 195 feet, driller Kyle Fetterly retrieves a fragment of what appears to be charcoal.

While the crew examines the charcoal piece, a deluge of water mysteriously bursts from the C1 Shaft. Apparently, the latest drill hole intersected the same vein of water which feeds C1- a vein which the narrator suggests might be the Smith’s Cove flood tunnel. Rick tastes the water and declares that it is “real salty,” bolstering the narrator’s suggestion. The narrator then explains that this latest development will prevent diver Mike Huntley from making a third dive to the cavern at the bottom of C1 (as discussed in the previous episode), as the silt kicked up in C1 will have rendered the shaft’s water completely opaque.

Later that day, Rick and Marty Lagina, Craig Tester, Dave Blankenship, Jack Begley, Charles Barkhouse, and Gary Drayton meet with local historian Doug Crowell. Crowell explains that Drayton’s Season 4, Episode 8 discoveries on the Island- particularly artifacts belonging to former Oak Island landowner Samuel Ball- prompted him to do some archival research in the hope of shedding some light on the identity of early Oak Island landowners. Crowell learned that Oak Island’s Lot 26 was once owned by Captain James Anderson, a privateer who fought for the Thirteen Colonies during the American Revolutionary War before turning his coat and fighting for the British. After the war, Anderson settled in Nova Scotia, purchasing Oak Island’s Lot 26 and living there until 1788. He died in 1796, a year after the discovery of the Money Pit, somewhere in the West Indies (i.e. Caribbean), where Crowell suspects he was engaged in privateering.

After briefing the crew on Anderson’s history, Crowell reveals that Steve Atkinson, one of privateer’s descendants, lives in Nova Scotia, and suggests that he arrange for the crew to meet him. The crew takes the historian up on his offer, tasking Alex Lagina, Peter Fornetti, and Charles Barkhouse with this undertaking. The next day, the three treasure hunters accompany Crowell to Atkinson’s home in Wolfville, Nova Scotia. Atkinson invites the four men inside before sharing his theory that Captain Anderson, from whom Samuel Ball bought Oak Island’s Lot 26, fought with Ball during the Revolutionary War. The narrator reminds us that Samuel Ball, prior to his Oak Island landownership, was a black plantation slave-turned Loyalist militiaman who earned his freedom fighting for the British. Atkinson then reveals that Captain Anderson was a spy as well as a pirate, captained a ship called the Betsy, and is known to have sailed as early as 1768.

After imparting his knowledge, Atkinson shows the men Captain Anderson’s old sea chest- a black wooden box which appears to be in incredible condition considering its age. Alex Lagina unlocks the chest with an old fashioned key and opens it, revealing several smaller chests and a stack of ancient, yellowed documents. The first document Alex examines is a hand-written certificate confirming Anderson as a Master Mason, a high-ranking member of a Freemasonic fraternity. The second document is a receipt for Captain Anderson’s schooner, the Betsy.

Once the treasure hunters conclude their examination of the contents of Captain Anderson’s sea chest, Atkinson voices his theory that the three small keys which share a ring with the larger key to Anderson’s chest might unlock other chests, perhaps treasure chests, which remain to be discovered on Oak Island. The narrator reminds us of an old legend which holds that the three co-discoverers of the Money Pit- Daniel McGinnis, John Smith, and Anthony Vaughan- discovered three treasure chests in the Money Pit sometime after 1795.

Later, Jack Begley and Peter Fornetti accompany Gary Drayton to Isaac’s Point, the easternmost end of Oak Island. There, the three men search for artifacts with a metal detector, hoping that soil freshly-exposed by wind storms might have brought certain items of interest closer to the surface. Sure enough, they quickly unearth a musket ball. Shortly thereafter, they discover a neatly-cut quarter of a copper coin, which Drayton suggests might be a “cut maravedis” reminiscent of the 17th Century New World Spanish coin discovered in the Oak Island swamp back in Season 1. The narrator then explains how it was once common practice to cut coins into halves or quarters in order to “make change.”

Drayton decides that the discovery of the quarter coin warrants a call to Rick and Marty. After the call, he, Begley and Fornetti are joined by the Lagina brothers, to whom they present their find. The brothers commend the men on their discovery and agree that they ought to have the coin fragment cleaned up and professionally examined.

In this episode, we learn more about the upcoming pattern drilling operation in the Money Pit area, the purpose of which is to pinpoint the precise location of the original shaft and/or recover artifacts placed by the original Money Pit builders. This operation will involve the drilling of 38 six-inch-wide, 200-foot-deep boreholes, each of them placed at a strategic location. Each hole will be cased with plastic piping to prevent it from collapsing, and to allow for future down-hole metal detection operations.

In this episode of The Curse of Oak Island, a core sample from a drilling operation in the Money Pit area brought up an item from a depth of 195 feet which resembled charcoal. Charcoal is one of the materials said to have been discovered in the original Money Pit when it was first excavated by the Onslow Company in the early 1800’s. Specifically, a layer of charcoal was said to cover the fourth 10-foot oak platform (the original Money Pit was punctuated by nine oak platforms set at 10-foot intervals). Likely produced from the combustion of local red oak wood, this charcoal, some Oak Island researchers believe, might have been the product of a furnace used by the original Money Pit constructors to draw fresh air down to the diggers labouring in the shaft (a practice which, according to civil engineer and Oak Island historian Graham Harris, was not common in the mining industry until 1665).

Captain James Anderson and his Chest

In this episode, Nova Scotian historian Doug Crowell of OakIslandCompendium.ca introduces us to Captain James Anderson, another historic character in the Oak Island story. Captain Anderson owned Oak Island’s Lot 26 in the mid-late 18th Century before selling his land to Samuel Ball, a plantation slave-turned English militiaman who settled in Nova Scotia after the American Revolutionary War.

Crowell and the men of Oak Island Tours Inc. are not the only historians to take an interest in this 18th Century mariner. Oak Island researcher Scott Clarke- a man with blood ties to both the Onslow and Truro Companies (19th Century Oak Island treasure hunting syndicates)- investigated Anderson’s Oak Island connection several years ago, showcasing some of his discoveries in a recent article for MonstersAndCritics.com. Researcher Diane Boumenot, Anderson’s great great great great great granddaughter, similarly studied Anderson’s history for genealogical purposes, displaying her findings on her website OneRhodeIslandFamily. Together, these researchers and historians paint a picture of a fascinating and complicated man whose characteristics correspond with the turbulent period of history of which he was a part.

As early as 1768, James Anderson worked as a sailor. During the American Revolution, Anderson, then a resident of Baltimore, Maryland, pledged allegiance to the revolutionary government of Maryland and fought for the New English rebels. Anderson initially served as a lieutenant aboard a Continental galley before being given command of his own ship, the Baltimore. For some reason, he changed his allegiance sometime during the war and sailed his ship to New York, where he delivered it to the British. Anderson was given another ship and began privateering for the Crown. He was eventually captured by a group of Patriots and imprisoned in Richmond, Virginia. During Anderson’s captivity, the State of Maryland wrote to Virginia Governor (and future President) Thomas Jefferson, charging Anderson with high treason and asking that he be delivered to them for execution. By some twist of fate, Anderson evaded the hangman’s noose and settled in Nova Scotia after the war (likely sometime around 1783).

Although it is not certain when exactly Anderson first acquired Oak Island’s Lot 26, a historical record examined in the show indicates that he sold it to Samuel Ball- a fellow Loyalist and veteran of the Revolutionary War- in 1788. The middle aged sea captain died in July 1796 in the West Indies, a year after the discovery of the Money Pit and two months before the birth of his daughter, Ann.

In this episode, Alex Lagina, Peter Fornetti, and Charles Barkhouse accompany Doug Crowell to the home of Steve Atkinson, one of Anderson’s descendants. There, Atkinson shows the men Anderson’s old sea chest, along with several documents interred inside. One of these documents reveals Anderson as a Master Mason, or a high-ranking member of a Freemasonic Lodge.