The following is a Plot Summary and Analysis of Season 5, Episode 15 of the History Channel’s TV series The Curse of Oak Island. 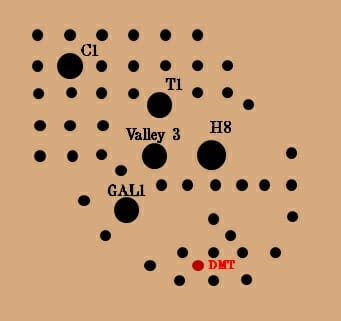 Rick Lagina, Dave Blankenship, and Gary Drayton meet with Mike Jardine and caisson operator Danny Smith at the Money Pit area, where the advance of the  DMT Shaft was halted at at a depth of 75 feet by a mysterious, impenetrable object back in Episode 13. On Smith’s suggestion, the team prepares to extract water from the shaft so that they can get a good look at the obstruction.

While the crew of Irving Equipment Ltd. go about their preparations, Rick and Marty Lagina and Gary Drayton welcome author Kathleen McGowan Coppens to the island. Coppens, who appeared on the show as ‘Kathleen McGowan’ in Season 2, Episodes 6 and 7, tells the treasure hunters that she has some information to share with them. Without further ado, the four head to the War Room, where they are joined by Dave Blankenship, Charles Barkhouse, Jack Begley, Alex Lagina, and Doug Crowell. 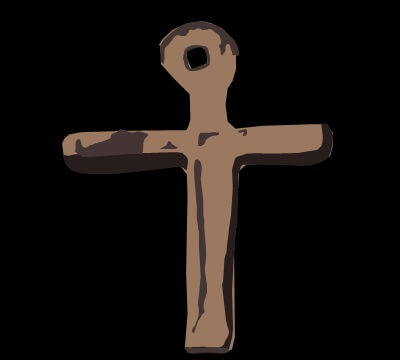 In the War Room, the Oak Island team shows Coppens the lead cross unearthed on Smith’s Cove in Season 5, Episode 10. After admiring the artifact, Coppens states, “There are a lot of representations of lead crosses that span a large time frame, and that can be anywhere from the early 3rd, 4th Century through the… 14th Century… So, there are a lot of different kinds of crosses. Nothing exactly like this, but there are some similar versions out there.”

After Alex Lagina remarks upon the similarity of the lead cross to the  crucifix carved into the walls of Domme prison, Coppens informs the team that she has relayed this observation on to Tobi Dobler, a leader of the Knights Templar of the New Order (a modern-day fraternity which claims descent from the medieval Knights Templar) who Marty and Alex Lagina met in the village of Rennes-le-Chateau, France, in Season 2, Episode 6. Dobler, Coppens explains, believes that the cross might be coated with lead, containing a centre of solid gold. According to Dobbler, the Knights Templar smuggled pieces of gold out of France during their suppression in 1307 by crafting them into little perforated rhomboids they called “pastilles” (although Coppens uses the word “rhomboid” to describe the shape of these artifacts, she also shows the Oak Island team a diagram depicting the pastilles as hexagonal).  The Templars covered these pastilles with lead in order to disguise their precious nature, threaded them onto cords, and wore them around their necks, often in combination with larger golden centre pieces similarly covered in lead. Dobbler suspects that the lead cross found on Smith’s Cove might be a centre piece of one these Templar necklaces.

“So,” says Begley, “there’s a chance that there’s some of those gold rhomboids that are out in Smith’s Cove still.”

“I certainly think so,” replies Coppens. “I think it’s time for us to go back out there.” Instead of proceeding to the beach, however, Coppens informs the team that a town just north of Domme, France, is called ‘Sarlat-la-Caneda.’ She then implies that the similarity between the words “Caneda” and “Canada”, coupled with Sarlat’s proximity to Domme, bolsters the theory that the Knights Templar made a secret voyage to Nova Scotia sometime in the 14th Century. Specifically, she suggests that the country Canada, through some design of outlawed French Templars, might have been named after Sarlat-la-Caneda,  similar to how Nova Scotia (literally “New Scotland” in Latin) was named after Scotland. The narrator then explains that Coppens’ theory regarding the origin of the word ‘Canada’ stands in contrast with that espoused by most mainstream etymologists, namely that the word ‘Canada’ originates from the Iroquoian word kanata, meaning “village” or “settlement”.

Later that day, Rick and Marty Lagina and Gary Drayton take Coppens on a tour of Smith’s Cove. Drayton claims that he plans to scour the entire area with a metal detector, while Marty explains that if he and his fellow treasure hunters are to do a thorough excavation of Smith’s Cove, they will have to contend with Nova Scotian digging permits and the whims of the Atlantic Ocean. “There’s no doubt in my mind that there’s more here,” says Coppens. “That cross is so important… I think it’s the beginning, not the end.”

The next day, Jack Begley and Charles Barkhouse stand by as the men of Irving Equipment Ltd. begin extracting water and sludge from the DMT Shaft with an enormous crane-operated bucket. 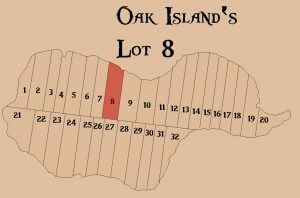 Meanwhile, the Lagina brothers and Gary Drayton go on a metal detecting excursion on Oak Island’s Lot 8, owned by Tom Nolan, the son of Fred Nolan. In a later interview, Rick Lagina informs us of Fred Nolan’s belief that there are at least eleven sites on Oak Island at which shallow treasure was extracted in the past. After ignoring a few “scrappy iron” signals on his metal detector, Gary Drayton discovers what turns out to be an ornate keyhole plate, evoking Captain James Anderson’s sea chest, introduced in Season 5, Episode 2, and the mysterious skeleton key introduced in Season 5, Episode 12.

Two days later, Rick Lagina, Alex Lagina, and Danny Smith stand by at the Money Pit area as crane operator Michel Oullette bails water and muck from the DMT shaft. After some time, the treasure hunters are informed that the shaft’s water level is so low that the obstruction at its bottom ought to be visible. Immediately, remote camera specialists Tony and Nick Paverill set about lowering a Spectrum 120HD camera down the shaft. On a screen at the surface, which displays the camera’s point of view, the treasure hunters get an excellent view of the shaft’s bottom. Strangely, thereappears to be nothing at the bottom of DMT aside from mud, clay, and several large rocks.

All of a sudden, water begins flooding into the caisson from the shaft’s bottom at a tremendous rate. Before the treasure hunters have time to react, the shaft fills with seawater up to the level of the water table. Disappointed with the setback, yet determined to carry on, the team proceeds to “probe” the bottom of the shaft with a chisel bit. When the probing operation is complete, Mike Jardine, despite a lack of visual evidence to support his theory, concludes that the impenetrable object at the bottom of the shaft is likely steel, reminiscent of the impenetrable iron object discovered time and time again by Oak Island treasure hunters in the Money Pit area. Danny Smith concurs with Jardine’s assessment.

Later that night, members of the Oak Island team, with Marty Lagina and Craig Tester in attendance via Skype, meet in the War Room. After some deliberation, the crew decides to send professional diver Mike Huntley down to the bottom of DMT in order to determine the nature of the obstruction. This undertaking would not be Huntley’s first dive on Oak Island. Back in Season 4, Episodes 9 and 10, Huntley explored the bottom of Borehole C1- a performance which he repeated in Season 5, Episode 1. With that, the treasure hunters wrap up the meeting.

Kathleen McGowan Coppens (formerly Kathleen McGowan), who appears in this episode, as well as in Season 2, Episodes 6 and 7 of The Curse of Oak Island, is an American writer who has written a trilogy of “historical esoteric fiction” novels revolving around historical women and controversial subjects. These novels include The Expected One (2006), The Book of Love (2009), and The Poet Prince (2010). Coppens has revealed that she intends to write a fourth book for the series entitled The Boleyn Heresy.

In 2009, Coppens published her first and only non-fiction book, The Source of Miracles: Seven Steps to Transforming Your Life through the Lord’s Prayer, a New Age-Christian self-help book.

In 2012, Coppens published the ebook novella entitled The Ballad of Tam Lin. This ebook is the first of a new series called Legends of the Divine Feminine, a series which Coppens claims will be “a unique hybrid of fiction and non-fiction exploration into stories from around the world, featuring extraordinary female characters.”

In 2016, Coppens wrote the Forward for Nancy J. Myers’ book Entering the Light Fantastic: Discovering Life After Life Through Orbs, an autobiographical account of Myers’ investigations into the phenomenon of ‘spirit orbs’- small balls of light which some paranormal investigators believe embody the souls of the departed.

In this episode, writer Kathleen McGowan Coppens reveals that a village situated just north of the town of Domme, France (where a number of Templar knights were incarcerated in 1307) is called Sarlat-la-Caneda. Coppens suggests that Canada was named after this French town, and implies that the Knights Templar had something to do with it. 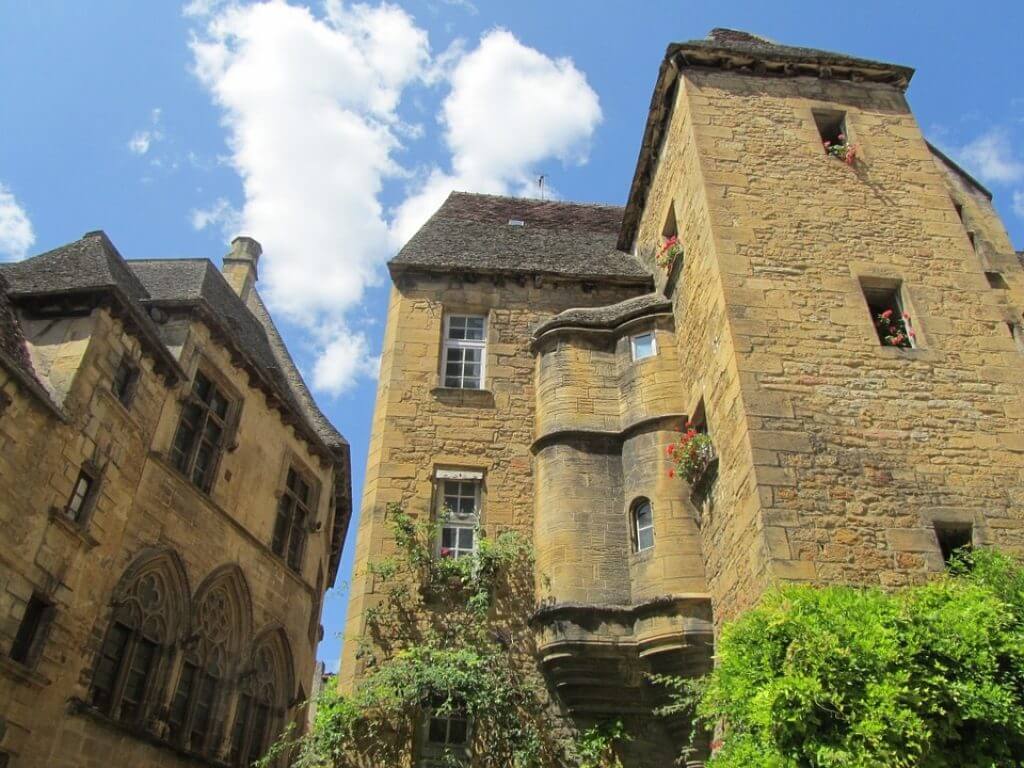 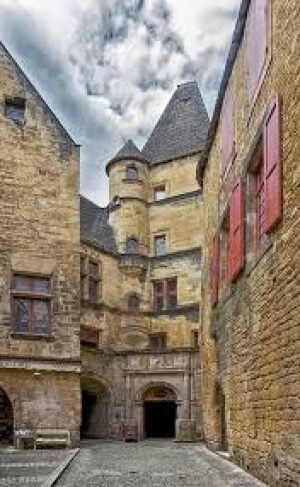 According to a number of online sources, Sarlat-la-Caneda was once two separate municipalities: Sarlat, a 14th Century town which revolves around a Dark Age Benedictine abbey; and the more mysterious La Caneda. In 1965, the two merged together to form Sarlat-la-Caneda.

“Sarlat” is a French word derived from “Serralatum,” a Latin word which roughly translates to “wide ridge,” evoking the concept of a large hill which, in medieval times, isolated the town from one or more of its neighbours. The origin of the word “Canedat,” on the other hand, is a little more mysterious. Some etymologists believe the word might derive from “Chania,” a city on the Greek island of Crete, on account of alleged ties between a certain monastery in the French village and a particular Cretan religious order. Others believe that “Canedat” is an appellation evoking a quantity of cannis- Latin for “reeds”- which might have grown in abundance in the town’s vicinity at the time of its naming.

Whatever the origins of the name ‘Sarlat-la-Caneda’, most etymologists agree that the word “Canada” derives from the Iroquoian word “kanata,” which translates to “village” or “settlement”. This word first appears in print in a written account of French explorer Jacques Cartier’s second voyage to the St. Lawrence River area (1535-1536), published in 1545. Upon learning this word from Iroquois Indians with whom he made contact, Cartier named the valley of the St. Lawrence River “Le Pays des Canadas,” or the “Land of Villages.” 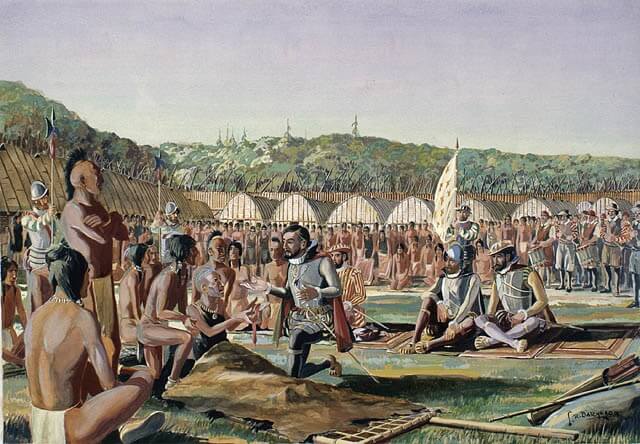 In 1791, the Province of Quebec was divided into two separate colonies, which were named Upper Canada and Lower Canada, respectively. In 1841, the colonies were united and dubbed the ‘Province of Canada’. In 1867, this province, along with Nova Scotia and New Brunswick, united to form the Dominion of Canada, the embryonic constitutional monarchy which would grow to become the second largest country in the world.

An alternative theory regarding the origin of the word ‘Canada’ has it that Spanish or Portuguese explorers, having found neither gold nor silver on the coast of the Atlantic Northeast, labelled the region “Aqui Nada,” or “Nothing Here,” on various charts and maps. According to this theory, these Iberian sailors passed this name on to the Iroquois, who began using it as a word for “village”.