The following is a Plot Summary and Analysis of Season 5, Episode 13 of the History Channel’s TV series The Curse of Oak Island.

The Oak Island team stands by at the Money Pit area, where the excavation of the DMT Shaft is underway. So far, the shaft has yielded little aside from dirt and rocks, as anticipated; the purpose of DMT is to intercept the hypothetical Chappell Vault, which is believed to have been displaced during the construction of H8, and is not expected to pass through much of the original Money Pit. The going is smooth, and the team members expect to reach their target depth without much trouble.

Later, Rick Lagina, Gary Drayton, and Doug Crowell meet in the War Room, where they discuss the implications of the lead cross found on Smith’s Cove in Season 5, Episode 10. Rick asserts that the cross’ resemblance to a Templar graffito at Domme prison seems to bolster the Knights Templar theory, and phones up researcher Zena Halpern to see what she thinks of the notion. Halpern, who has had time to analyze images of the lead cross, proclaims, “There is absolutely no doubt that this is the goddess Tanit,” Tanit being one of the two chief deities of the ancient city of Carthage. “This is a very old representation of Tanit,” she continues, “because she has a straight body.” When Crowell asks Halpern when she thinks the cross was crafted, she states that it, “probably emerged from the Phoenicians from 1200 B.C.” After the narrator gives us a brief history lesson on the worship of Tanit, Halpern states that the Knights Templar “would have definitely revered” the ancient Punic goddess and, when told of the cross graffito at Domme, contends that the Templars carved it in the hope of attaining Tanit’s protection. Halpern congratulates the treasure hunters on their find and ends the conversation, whereupon Rick suggests that the team ought to have the cross analyzed by professionals in order to determine the veracity of her claim. 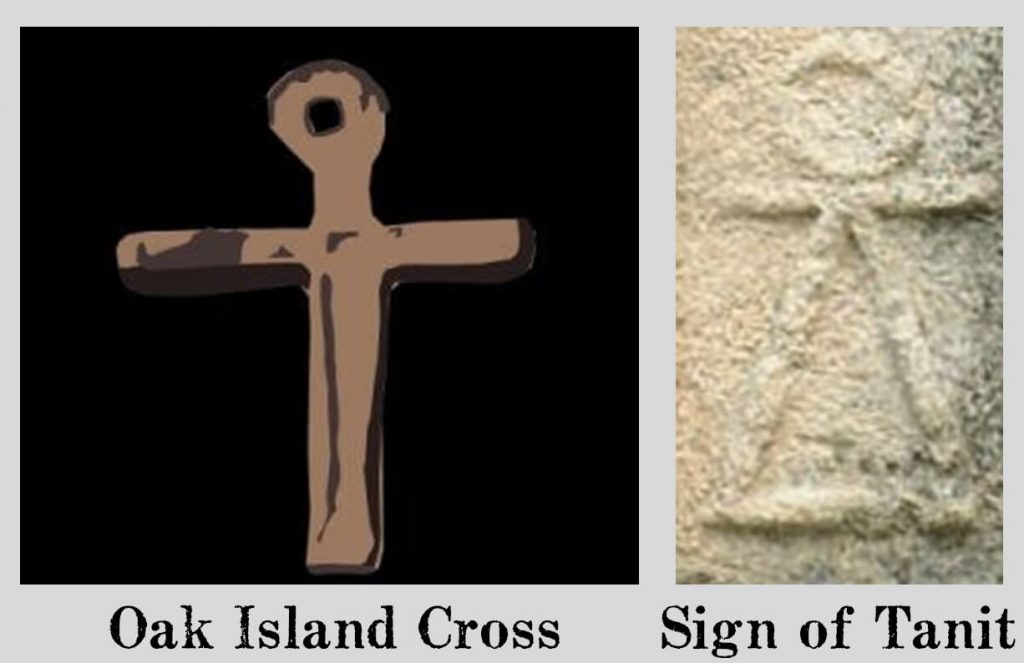 Later, Rick Lagina and Charles Barkhouse head to the northern section of the Oak Island swamp, formerly owned by Fred Nolan. With the permission of Tom Nolan, Fred’s son, the treasure hunters begin draining that section of the swamp. 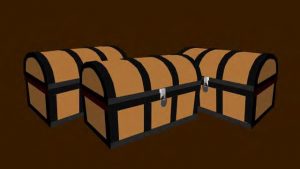 Meanwhile, Jack Begley, Charles Barkhouse, and Gary Drayton, with the assistance of Tom Nolan’s associate Jim Meagher, explore more of the old pottery dump introduced in the previous episode. After searching for some time, Drayton unearths a decorative hinge which he likens to treasure chest hinges he has extracted from Spanish shipwrecks. Not long afterwards, Barkhouse discovers another rusted hinge, which Drayton claims is also of the type normally found on chests or boxes. 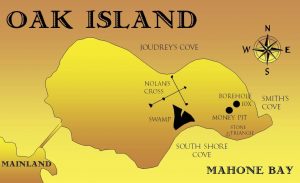 The next day, Rick, Marty, and Alex Lagina and Gary Drayton put on coveralls and rubber boots and wade into the freshly-drained northern section of the swamp. Equipped with metal detectors, the treasure hunters search the area for anything out of the ordinary. Rick soon discovers a large, axe-sharpened wooden stake matching the description of the mysterious survey markers which Fred Nolan discovered in the swamp in 1969. In an interview, Rick states that, years earlier, Dan Blankenship and Fred Nolan once carbon dated one of these stakes to 1575 A.D., give or take 85 years.

The following day, the treasure hunters stand by as the crew of ROC Equipment and Irving Equipment Ltd. excavate more of the DMT Shaft. At a depth of 75 feet, the oscillator seizes up and begins leaking hydraulic fluid. The crew members trace the problem to a failed O-ring, a hydraulic seal which seems to have ruptured as a result of the caisson encountering some sort of impenetrable obstruction, which caisson operator Danny Smith believes is not a rock. After smashing the mysterious obstruction with a chisel bit, hammergrab operator Michel Oullette attempts to remove it, but is unable to get a good grip on it due to its shape and orientation.

While the crew members struggle with their predicament, Jack Begley and Gary Drayton make an ominous discovery. In the most recent spoils brought up by the hammergrab, they find more than ten of the caisson’s steel teeth, which evidently broke free when they ground against the obstruction. “What happens if you don’t have any more teeth?” Begley asks Mike Jardine of Irving Equipment Ltd. “You don’t go any further,” Jardine replies.

That evening, Rick and Marty Lagina, the latter in attendance via Skype, meet in the War Room with Danny Smith and Mike Jardine of Irving Equipment Ltd. The men discuss their dilemma and decide to send a camera to the bottom of the DMT shaft to get a better look at the obstruction.

In this episode, researcher Zena Halpern claims that the lead cross found on Smith’s Cove in Season 5, Episode 10, is a 14,000-year-old representation of Tanit, a goddess worshipped by ancient Carthaginians.

Most modern-day historians believe that the ancient city of Carthage, located on the coast of northern Tunisia, was established sometime in the 9th Century B.C. Initially, the city was founded as a colony of Phoenicia, an ancient mariner society centered around the Lebanese city of Tyre. Gradually, as Phoenicia began to lose its grip on the Mediterranean due to increased trading competition with the Archaic Greeks and the Etruscans (ancient Italians), Carthage began to eclipse its Middle Eastern progenitor. By the 7th Century B.C., Carthage was one of the wealthiest and most powerful cities in the Mediterranean, remaining so until 146 B.C., when it fell to Rome.

As Carthage grew, it began to develop its own distinctive Punic culture (the word ‘Punic’ is synonymous with ‘Carthaginian’). Most notably, the citizens of Carthage adopted two chief deities for their city: the god Ba’al Hammon, and his wife, the goddess Tanit.

Although there is some controversy regarding her origin, most historians agree that Tanit was not exclusively a Punic goddess. She was initially worshipped in the Phoenician homeland, most often in connection with the Phoenicians’ own mother goddess, Astarte, the patron of fertility and war. By the time the citizens of Carthage adopted her as one of their city’s two chief deities, Tanit had taken on many of Astarte’s characteristics. In time, the two goddesses were indistinguishable from each other.  Tanit eventually evolved to become everything for the Carthaginians that Astarte was for the Phoenicians. However, she retained one particular characteristic with which Astarte was never attributed: she was associated with child mortality, either as a protective guardian of the souls of dead children or as an idol to which children were sacrificed.

The symbol which the people of Carthage used to represent Tanit consisted of an isosceles triangle topped by a horizontal arm (which was sometimes crooked upwards at the elbows) which, in turn, was topped with a circle. Oftentimes, the circle was crowned with a downward-facing crescent. In some early depictions of the symbol, Tanit’s body was a trapezoid instead of a triangle. Despite Zena Halpern’s assertion, however, it was never, to the best of this author’s knowledge, a vertical line. Incidentally, there are two symbols which really do correspond with what Halpern 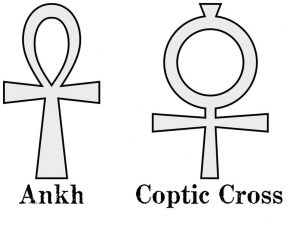 contends is an early version of the sign of Tanit, namely the ankh (an Egyptian hieroglyphic symbol for ‘life’), and an early form of the Coptic Cross.

Another potential mistake Halpern made in this episode is her assertion that shape of the cross at Smith’s Cove is a 13th Century B.C. representation of this Carthaginian symbol. Most historians agree that the sign of Tanit first began to appear in Carthage in the 6th Century B.C. However, at least one academic contends that the oldest version of it graces an 11th Century B.C. building in the ancient city of Tel Megiddo (a city in northern Israel associated with the biblical Armageddon). If the cross at Smith’s Cove truly constitutes a 13th Century B.C. representation of Tanit, it is the oldest of its kind by at least 2,000 years.

Although the potential connection between the lead cross found at Smith’s Cove and the goddess Tanit is unlikely, it is consistent with the theory, held by fringe historian J. Hutton Pulitzer, that many of the petroglyphs carved by the indigenous Mi’kmaq people of Nova Scotia show signs of Punic/Phoenician influence, suggesting that the Phoenicians or the Carthaginians made voyages across the Atlantic Ocean to the New World. For example, Pulitzer claimed in Season 2, Episode 2 of The Curse of Oak Island that the so-called “Eight-Pointed 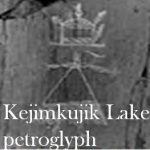 Star” of the Bedford Barrens, a Mi’kmaq petroglyph located a short distance from Oak Island, is a symbol of Astarte. In a similar way, one might argue that certain petroglyphs at Kejimkujik Lake, Nova Scotia, traditionally believed to depict 18th Century Mi’kmaq hunters, bear vague resemblance to the sign of Tanit.

In this episode, the advancement of the DMT Shaft is halted by some sort of mysterious obstruction, which oscillator operator Danny Smith believes is not a rock. This is not the first time the completion of a shaft or drillhole has been precluded by some sort of underground obstruction. Similar incidents occurred: