The Curse of Oak Island- Season 4, Episode 9: Echoes from the Deep

The Curse of Oak Island’s Season 4, Episode 9 is out. Is anyone else on the edge of their seats? Let’s have a look at this latest chapter in the Oak Island treasure hunt.

Brothers Rick and Marty Lagina, treasure hunter Dave Blankenship, and Oak Island historian Charles Barkhouse meet at Borehole 10-X with geophysicist and sonar scanner Brian Abbott. Abbott- who has appeared in earlier episodes of The Curse of Oak Island, including Season 2, Episodes 9 and 10; and Season 3, Episodes 1 and 6-  has returned to Oak Island to conduct a sonar scan of of the chamber at the bottom of the 230-foot-deep shaft. While Abbott prepares his equipment, the narrator describes how the sonar scan expert, in 2015, conducted a sonar scan of the chamber at the bottom of Borehole 10-X, analyzed the data, and determined that the chamber contained a number of man-made objects. One of these objects appeared to be wooden chest. While manually exploring the cavern in Season 3, Episode 13, however, celebrity wreck diver John Chatterton found no evidence of artificiality. He did, however, find a large rectangular rock, which he believes was the chest-like object indicated by the results of the sonar scan. He maintains that he picked up the rock and moved it from its original location. Marty Lagina, who would like to conclude investigations at 10-X so that he and the crew might focus on other areas of interest on Oak Island, hopes that another sonar scan will solve the 10-X mystery once and for all; if a second scan reveals the presence of a single chest-like object situated a short distance from the similar object in the first scan, then the rock that Chatterton picked up and moved is almost certainly Abbott’s ‘chest’.

While the crew looks on, Abbott conducts his sonar scan of Borehole 10-X. As the operation progresses, Abbott- while watching the scan data on a screen- states that the rectangular object appears to be in the same general location on the chamber floor as it was on the 2015 scan, but that he will need to properly analyze the scan data in order to determine exactly where this new object lies relative to the old one.

That night, the Oak Island crew meets with Brian Abbott in the War Room. Abbott, who has finished analyzing the data from his sonar scan of 10-X and comparing it with that of his previous scan, presents his findings to the crew. He maintains that the two scans are nearly identical save for the rectangular, chest-like object; in the most recent scan, the object is nowhere to be found. According to Abbott, this is an indication that the object John Chatterton picked up and moved during his dive is indeed the chest-like object indicated by the older scan. With that, Abbott wraps up his presentation and leaves the crew to their thoughts. 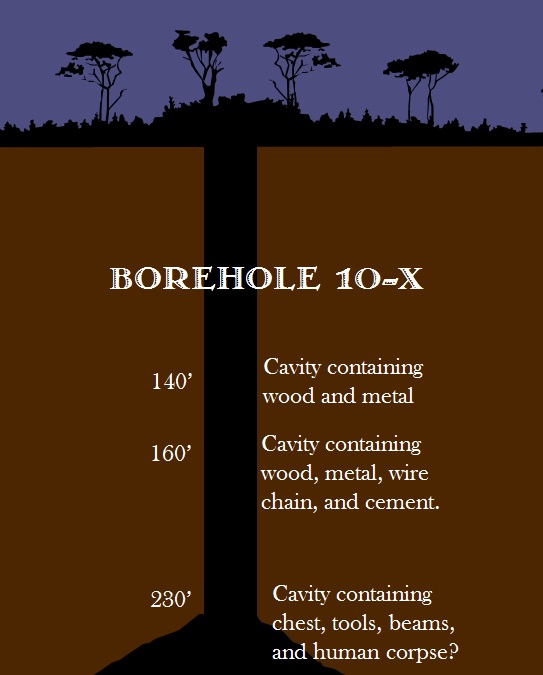 Following Abbott’s presentation, Marty Lagina states that he doesn’t “want to do anything more in 10-X.” Rick Lagina and Dave Blankenship, on the other hand, indicate their unwillingness to give up on the shaft into which Dave and his father Dan poured so much of their time, energy, and resources. The crew members continue to discuss the issue of 10-X for some time, each man attempting to justify his own position. In the end, they tentatively agree to put 10-X on the back burner and direct their attention towards the Money Pit, namely Borehole C1. With that, they conclude their meeting. 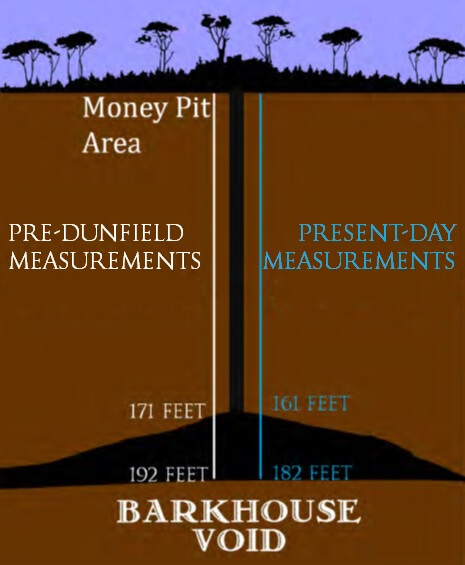 Later, the Oak Island crew meets at Borehole C1 with professional wreck diver John Chatterton and his dive supervisor Howard Ehrenberg. In order to prepare for Chatterton’s upcoming dive, the men of Oak Island Tours Inc. have arranged for sonar experts Blaine Carr and Evan Downie to conduct a sonar scan of the chamber at the bottom of C1 with the 3D Multibeam Scanning Sonar device by BlueView, a piece of cutting edge sonar scanning technology. Carr and Downie arrive on site, unpack their equipment, and lower the BlueView scanner into Borehole C1 by a cable. The scanner reaches the void at the bottom of C1 without incident. The subsequent sonar scan reveals the presence of what appears to be a narrow augmentation of the chamber at the bottom of the void, which Carr suggests might be the entrance to an underground tunnel.

That night, Carr, Downie, Chatterton, and Ehrenberg meet with the Oak Island team in the War Room. There, Carr and Downie present their survey data taken from the void at the bottom of C1. They elaborate upon the augmentation they discovered in the side of the void, which they now believe extends at least “10 feet… from the centre of the” main shaft, and may well “carry on” further. They also discuss the chamber at the bottom of the void, the dimensions of which Chatterton succinctly simplifies to “about 7 foot high, and 10′ x 10′.” Chatterton and Ehrenberg consider the data and decide to perform a dive in C1 the following morning. With that, the meeting is concluded.

The following morning, Chatterton, Ehrenberg, and their crew meet with the men of Oak Island Tours Inc. at Borehole C1. The diving crew reviews safety procedures before lowering a geared-up Chatterton into Borehole C1 on a bosun’s chair, a suspension device somewhat akin in appearance to an old-fashioned playground swing. Chatterton descends the caisson into the cavity below without incident. As he explores the void, he observes that the walls appear to be composed of “cut rock”. 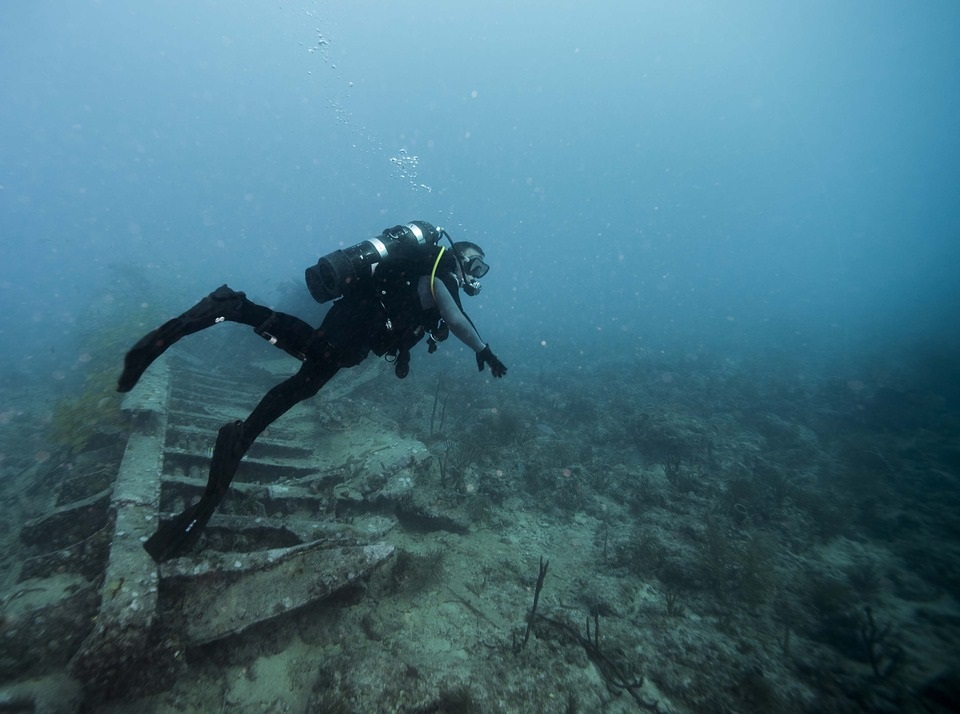 In time, Chatterton reaches the bottom of the void. His vision is impeded by the thick cloud of black silt that characterizes the water in C1 at that particular depth. He proceeds to explore the chamber manually, feeling the walls and floor with his hands. He proclaims the cavern floor to be made of soft clay, and the stone walls to be “very rough, irregular in shape, [with] a lot of sharp edges”.

After being in the water for twenty minutes, Chatterton is slowly brought to the surface so as to avoid decompression sickness (a potentially deadly condition involving the formation of nitrogen bubbles in the bloodstream, which can result if one ascends from a dive too quickly). Upon surfacing, he tells the crew “I’ve got good news and bad news. The bad news is… visibility is terrible. The good news is… there’s another hole.” The narrator then explains that, in accordance with Carr and Downie’s sonar scan, Chatterton discovered the presence of what could be a tunnel leading away from the chamber at the bottom of Borehole C1. Upon being prompted by Rick Lagina, he suggests that a diver could conduct some metal detecting at the bottom of the chamber in a future dive.

Immediately, another expert diver, Mike Huntley, prepares to make a dive to the bottom of C1 with the express purpose of retrieving the shiny, gold-coloured object observed in an earlier underwater camera operation. Huntly promptly suits up and descends the 170-foot-deep shaft.

Huntly makes his way to the bottom of the C1 void without incident. Equipped with an underwater metal detector, he begins scanning the chamber for any sign of metal. Immediately, he discovers a large, smooth, block-like chunk of metal embedded in the cavern wall. He is unable to pry it out or extract a sample from it, and is unable to visually identify it due to the presence of heavy silt. Rick, Marty, and other members of the Oak Island crew wait in anticipation on the surface, wondering if they have finally, in Rick’s words, “[opened] the chapter on the book that I call ‘The Oak Island Mystery'”.

In the summer of 2015, Oak Island Tours Inc. enlisted the help of professional diver John Chatterton. The treasure hunting company hoped Chatterton might dive to the bottom of Borehole 10-X and explore the cavity there in order to determine whether it is natural or man-made. In Season 3, Episode 13, Chatterton successfully dove into the 10-X cavity, explored it manually, and could find no evidence suggesting that the cavern is man-made.

John Chatterton is a celebrity wreck diver and Vietnam War veteran who served as co-host for the History Channel’s show Deep Sea Detectives. Throughout his career, Chatterton has explored a number of famous sunken ships, including German submarine U-869 (a sunken U-boat of Nazi Germany’s Kriegsmarine which Chatterton and his team discovered off the coast of New Jersey in 1991), RMS Lusitania (a British ocean liner which was torpedoed by a German U-boat in World War I), the HMHS Britannic (an Olympic-class ocean liner which sank off the island of Kea, Greece, in 1916), the MV Struma (a ship carrying Jewish refugees fleeing the Holocaust which was torpedoed by a Soviet submarine in the Black Sea off Istanbul in 1942), the SS Andrea Doria (a luxury Italian ocean liner which sank in 1956 off the coast of Nantucket, Massachusetts, after colliding with another ship), and the famous RMS Titanic (a massive British superliner which hit an iceberg in the North Atlantic on her maiden voyage in 1912 and sank, resulting in the deaths of around 1,500 passengers and crewmembers). 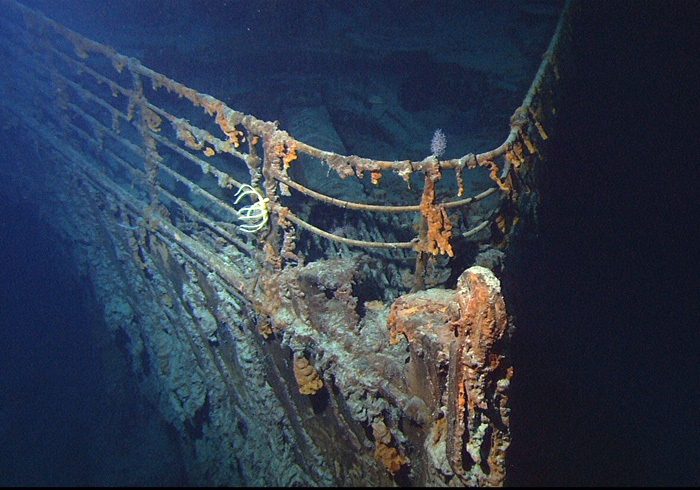