Two of the finest young warriors the Crees ever had were two Scottish half-breeds, sons of a Highland Scot named Hugh Sutherland, a Hudson’s Bay Co. employee. One was called Oo-sa-us-tik-wan, or Yellow Hair, and the other, Tip-oo-es-tik-wan, or Curly Hair. They were tall, strapping young fellows, very fair and blue eyed. They had a great reputation which they fully deserved as warriors, and absolutely without an atom of fear in their composition.

When the report went abroad that they were to go on the warpath, the young Cree braves flocked to them from every quarter, assured that under the leadership of the Sutherland boys, they would return victorious, bringing back many ponies and plenty of scalps.

In the winter of 1869, a band of mingled Crees, Saulteaux and Young Dogs (a cross between the Crees and the Assiniboines) had gathered at the call of Yellow Hair and Curly Hair, at the Red Ochre Hills, to make a raid on the camps of the allied Blackfoot, Bloods, and Peigans. They numbered between 500 and 600 warriors and were the pick of the tribes.

I met them at the Red Ochre hills just as they were about to start. I took occasion to say to Yellow Hair that it would be better for him to be between the stilts of a plough than to be dressed in his war clothes and preparing to fight the Blackfoot and Bloods. “I have never been taught anything but fighting,” was the reply. “I suppose I have relatives beyond the Big Water who would be sorry to see me leading this kind of life, but how can I help it?” 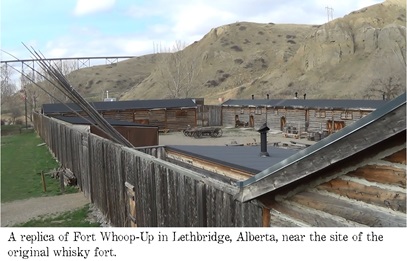 The party started up the South Saskatchewan on the ice, for it was the winter time. Finally they reached the place where the town of Lethbridge now stands. There they halted and sent runners or scouts to find out where the camp of the enemy was and what their strength might be. Those scouts were not sufficiently careful in their reconnaissance, for they reported a camp of only about 60 lodges, never having noticed that there were about 200 more lodges scattered over the adjoining country within easy reach of signal or other means of alarm.

The place where the Blackfoot, Bloods and Peigans had pitched their camps was just above Fort Whoop-Up, a trading fort built by an American named Healy.

Acting on the information brought by their scouts, the Sutherland boys attacked the enemy with every prospect of an easy victory. However the noise of the firing in a very short time brought the other Blackfoot and their allies to the scene, and the Crees were completely outnumbered. Nevertheless, they kept their ground, fighting with the courage and desperation of lions at bay until the approach of night, when they retreated, still fighting, 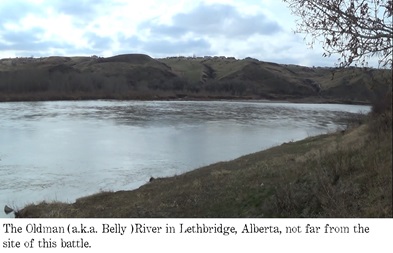 until they crossed the Belly River at a point opposite to where Lethbridge now stands. There they were completely surrounded and before they succeeded in cutting their way through and escaping, both Yellow Hair and Curly Hair had fallen and between 60 and 70 of their men. The two brothers made a grand stand before they fell, fighting with their knives after their lower limbs had been rendered powerless by the bullets of their enemy, and only yielding up their scalps with their lives.

The Blackfoot and their allies were led in this battle by three half-breeds, Jerry Potts, who commanded the Bloods, and two brothers, Alex McKay or Mak-kaw, meaning Unborn Calf, and Charley McKay, or Ky-u, or The Bear, who led the Bloods and Peigans. To this day the Blackfoot will tell you that they never saw braver men than the two Sutherland brothers. Two large piles of stones were raised by their enemies to mark the spot where they fell. Those cairns are still to be seen on the west side of the Belly River, on the old bull trail, leading to Macleod, and no Blackfoot, Blood or Peigan passes them without adding a stone to the pile.