Back to The Adventures of Paul Kane: Part 9.

The Adventures of Paul Kane: Part 10

The Rapids of the Dead

Paul Kane left Colville on September 22nd with six voyageurs bound for Boat Encampment in the Rocky Mountains. The following day, the party successfully transported their boats and cargo up a dangerous rapids called the Little Dalles. They continued on, travelling up large lake-like sections of the Columbia fringed by birch and cedar forests and the Rocky Mountains beyond; subsisting on deer, bear, and mountain goat.

On October 4th, Kane and his companions encamped near a stretch of river called the Dalle des Morts, or the Rapids of the Dead. Kane’s companions told him that the rapids were named after a grisly event which took place on them in 1817. According to this version of the story, a French-Canadian, a Metis, and an Iroquois, fearful of running the rapids, attempted to lower their canoe down it with a trackline, the end of which held from the shore. Their efforts were in vain; the trio lost their canoe and all of their provisions in the frothing white waters. Left with no other choice, the party continued on foot, picking their way along the rockly slopes of the riverbank.

Three days after the disaster, the Metis abandoned his companions, fearing that they might kill him and eat him. His fears were justified; that night, the Iroquois clubbed the French-Canadian to death with a stick. After gorging himself on the corpse, the Indian proceeded to cut the remainder of the man’s flesh into strips, which he dried on the rocks of the riverbank. That accomplished, the Iroquois continued on to the foot of the rapids, where he built a raft and proceeded downriver with his dried meat, which he covered with a piece of pine bark. Shortly thereafter, he was intercepted by a North-West Company rescue party which had been sent to search for him and his companions. The Iroquois hastily attempted to dispose of the evidence of his crime, using his foot to push away his raft and its ghastly contents while he entered the canoe of his rescuers. Suspicious of the Iroquois’ anxiety to throw away what appeared to be perfectly good provisions, one of the engages overtook the raft, lifted the bark, and discovered, amidst strips of dried meat, a severed human foot. Pretending not to notice anything amiss, he inconspicuously slipped the appendage into a bag, determined to present it to his superior at the earliest opportunity. Despite his best efforts, this action was perceived by the Iroquois.

The party continued on to Spokane House, a North-West Company trading post situated on the Spokane River. One night during the voyage, the Iroquois snuck away from his fellows, stole the  bag containing the foot of his erstwhile companion, and threw it in the river.

When they reached the trading post, the voyageurs delivered the Iroquois up to the fort’s factor, Mr. McMullan, and told him that they suspected he had murdered and cannibalized his companions. Without sufficient evidence to convict him of murder, the factor sent the Indian to a distant post in New Caledonia.

“I had previously travelled several hundreds of miles with the son of this very man,” Kane wrote, “who always behaved well, although there certainly was something repulsive in his appearance, which would have made me dislike to have had him for a companion in a situation such as above described.”

Kane and his companions ascended the Dalles des Morts on October 6th, stopping once to waterproof the bottoms of their canoes with pine resin. Kane took the opportunity to sketch the rapids during this spell. While he did so, one voyageur (whom other sources suggest might have been named Andre Chalifoux) told him about another disaster which took place on the rapids about four years prior (in fact, the event occurred in 1838, nine years prior).

That year, the voyageur had served as a steersman in the Columbia Express, the annual shipment of HBC goods from York Factory on Hudson Bay to Fort Vancouver. Among the forty travellers who accompanied him on this trans-continental journey were his ten-year-old daughter, a young Company man named McGillveray and his dog, a young botanist (who other sources identify as Englishman Robert Wallace), and a half-breed girl with whom the botanist fell in love (other sources identify this young lady as Maria Simpson, the Metis daughter of HBC Governor George Simpson). “A mutual attachment induced [the botanist and the Metis girl] to become man and wife, at Edmonton,” the voyageur told Kane, “though few couples, I think, in the world would choose a trip across the mountains for a honeymoon excursion; but they bore all their hardships and labours cheerfully, perfectly happy in helping each other, and being kind to their companions.” 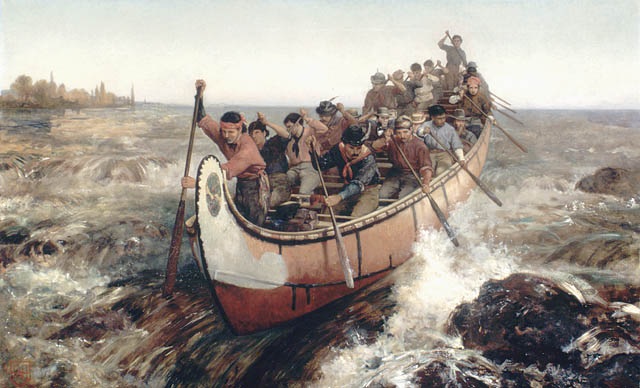 The party arrived at the head of the Dalles des Morts on October 22nd. As the rapids’ whirlpools appeared to be “throwing out and not filling”, they decided to run the watercourse. “I therefore went on without stopping,” Kane’s informant told him, “and when in the midst of the rapids, where there was no possibility of staying the downward course of the boat, I discovered to my dismay that the whirlpools were filling. One moment more and the water curled over the sides of the boat, immediately filing her. I called out for all to sit still and hold on steadily to the seats, as the boat would not sink entirely owing to the nature of the cargo, and that I could guide them to shore in this state. We ran more than a mile in safety, when the boat ran close by a ledge of rocks. The botanist, who held his wife in his arms, seeing the boat approach so near the rock, made a sudden spring for the shore; but the boat filled with water, yielded to the double weight of himself and wife, and they sank clasped in each other’s arms. The boat suddenly turned completely bottom upwards; but I and another man succeeded in getting on the top of her, and were thus carried down safely. We thought we heard some noise inside the boat, and the man who was with me, being a good swimmer, dived under, and soon, to my unexpected joy, appeared with my little daughter, who almost miraculously had been preserved by being jammed in amongst the luggage, and supported by the small quantity of air which had been caught by the boat when she turned over. We soon got ashore: M’Gillveray and four others saved themselves by swimming, the remaining fourteen were drowned; we immediately commenced searching for the bodies, and soon recovered all of them, the unfortunate botanist and his wife still fast locked in each other’s arms- an embrace which we had not the hearts to unclasp, but buried them as we found them, in one grave. We afterwards found M’Gillveray’s little dog thrown up dead on a sandbank, with his master’s cap held firmly between his teeth.”

Continued in The Adventures of Paul Kane: Part 11.