Back to The Adventures of Paul Kane: Part 10.

The Adventures of Paul Kane: Part 11

Kane and the voyaguers successfully navigated the Dalles des Morts and continued up the Columbia. On October 10th, they arrived at Boat Encampment. Since the express from York Factory had not yet arrived, the travellers tried “to pass the time as pleasantly as [they] could under the circumstances”.

On October 29th, the west-bound fur brigade arrived with fifty or sixty horses and a load of pelts for the Russians. While the Columbia Express continued down the Columbia, Kane and his companions toiled east over the Rockies with the horses. On the way, one of Kane’s horses sank into a mud hole up to its neck, and he and his fellow travellers only managed to extract it with great difficulty. They struggled on through the mountain pass, trudging through deep snow and enduring biting cold which froze the mercury in their thermometers and transformed Kane’s long red beard into a solid mass of ice.

Kane and company reached Jasper House on November 6th. There, they constructed snowshoes and sleds before resuming their journey on November 15th. That night, the travellers were hosted by an Indian family whom they met on the trail. The man of the house treated the Company men to freshly-killed bighorn sheep and regaled him with tales of his hunting exploits, while his wife prepared beds of sheepskins for the travellers, which Kane described as “the most comfortable bed I had slept in for many months”. 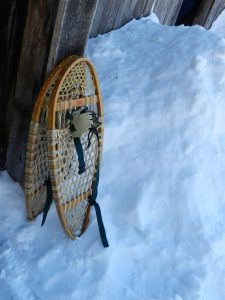 The travellers reached the Athabasca River and proceeded across the frozen Jasper Lake, being blown along by a fierce westerly wind. On the way, they met and stopped to smoke with a party of Indians, whom Kane noted travelled barefoot over ice or hard snow, only putting their moccassins on when they stopped to rest, or when they were required to put on their snowshoes. Later in the day, the travellers left the smooth frozen plain of lower Japer Lake for the labyrinth of tall icy crags which characterize that lake’s upper reaches, these ridges having been formed by the strong current beneath. While ascending one of these frozen hillocks, which the voyageurs called bourdigneaux, Kane broke through the ice and was nearly swept under by the current. He was rescued by his companions, who built a roaring fire on the lake shore for the purpose of thawing the artist’s frozen clothes. As the sun was going down, the company was obliged to camp on that spot.

The men continued their journey up Jasper Lake, climbing bourdigneaux when they could and hacking their way through the dense lakeside forest at places where the lake was impassable. During this stretch of the journey, Kane’s feet were cut so badly by the frozen strings of his shoeshoes that he left a trail of blood behind him. To make matters worse, he subsequently developed an agonzing inflammation of the lower legs which often afflicts novice snowshoers, which the voyaguers called mal de racquet, or “snowshoe evil”. The voyaguers offered to cure his condition by slicing the instep of his foot with a gun flint, but Kane declined, fearing that the wound would become frostbitten.

The travellers continued on through the forest and over the ice, enduring privation, pain, and severe cold. They arrived at Fort Assiniboine on November 29th, thoroughly weary and nearly starving. There, they feasted on whitefish. “Whether it was the hunger from which I was suffering,” Kane wrote, “or the goodness of the fish, I know not now; but certainly they seemed to be the most delicious I had ever tasted, and the memory of that feast hung over me, even in my dreams, for many a day afterwards.”

Continued in The Adventures of Paul Kane: Part 12.