Continued from Chapter XXIII – Trouble with the Indians at Calgary.

IN NOVEMBER 1880 Col. Macleod, the commissioner of the police, resigned that position, and the Assistant-Commissioner, Lt.-Col. Irvine, was appointed in his place, the headquarters of the force still being at Fort Walsh. Col. Macleod was appointed stipendiary magistrate for the Northwest Territories, his district being a very large one, comprising the Fort Walsh district, and that of Macleod, Calgary and Edmonton. Lt.-Col. Jarvis who had been in command of a troop at Edmonton since 1874, he having taken that troop there in that year, building Ft. Saskatchewan the following year, on the location where it now stands, was moved from Edmonton to Ft. Macleod and given command of that district, I and Sub-Inspector Dickens being his subalterns. During the winter of 1880 a serious fire occurred in the fort, all the stables being burned; the buildings were not much loss, being only old log buildings, the roofs being of mud, but much harness and saddlery were destroyed, and at one time it looked as if the quarter-master’s stores would also go, but with the assistance of many of the civilians from the village the fire was at last extinguished, with only the loss of the stables. The buildings in the old fort had not improved very greatly since they were first built; floors had been laid, but the mud roofs still remained, and the buildings even now were far from comfortable. Ft. Walsh was much ahead of Macleod, the buildings being all roofed in and fairly comfortable.

A police farm had been started at Pincher Creek, about twenty-five miles west of Macleod, under the charge of Sub-Inspector Shuortcliff, but it did not turn out a success, and was shortly afterwards abandoned. The Indian department had also started an experimental farm at the same place, with the view to raising grain to be supplied to the different Indian reservations in the treaty. Some fairly good crops were raised here, but the expense was greater than the return, so this farm was, after a few years, also abandoned, and sold shortly afterwards. The section of country in and around the vicinity of Pincher Creek was, and is to-day, by far the best farming section in Southern Alberta, and in that section, as time went on, most of the settlers located, that is, those who went in for mixed farming and stock-raising, while the country east on the plains was taken up by the large stock-owners, and in after years large leases of grazing land were secured by these companies, which had a tendency to keep back the settlement of the country by making it impossible for settlers to take up land.

I resigned my commission in the police force in the early spring of 1881, as I intended to start ranching at Calgary that year. I therefore went to Calgary in February and started building and ploughing land to crop. There was at that time only I.G. Baker and the Hudson’s Bay company stores at that place. Both were small stories, as indeed there was little or no white trade there in those days, there being only half a dozen or so settlers anywhere in the country between Macleod and Calgary, and from there to Edmonton. Sgt. Johnstone was alone in charge of the old fort at Calgary but at Morleyville mission, at which place the Stoney Indians had their reserve, David McDougall had a store, and did a very good business with those Indians who confined their hunting and trapping altogether to the mountains, going far south on their hunts, into the states, and also a long way north, and in those hunts they collected large quantities of fine fur, such as silver and black fox, beaver, martin, bear and deer skins, of many varieties. These they nearly altogether traded to Mr. McDougall, who made a yearly trip to Winnipeg, where he disposed of his fur, and brought a supply of trading goods back with him. The Stonies did some trade with the Hudson’s Bay company, both at Edmonton and Calgary, but little or none with the American traders. They had some cattle given them by the government, and this, together with a little farming they had begun to do, made them better off, as they were more industrious than any other tribe on the plains.

The Crees had nearly ceased coming south altogether, since the buffalo went south, with the exception of a large band of non-treaty Indians under Big Bear, who hung around the Cypress hills and who joined the half-breeds in their rebellion in the year 1885. There was, as I have before mentioned, a small band of Iroquois Indians, who lived altogether by themselves in the Jasper Pass, northwest of Edmonton. These Indians were brought out from Canada many years ago, to act as boatmen and hunters for the Hudson’s Bay company; and, settling in the mountains, have remained there to this day.

I started ranching at Calgary with a small band of cattle and some horses, but the prospect of making anything was not encouraging, there being no market in the country, and even in 1881 we never expected to see a railroad built in that section, although rumors were in circulation that the C.P.R. would be commenced before long; the survey was made near Edmonton, and it was at first thought that the road would be built through that section.

Lt.-Col. Jarvis also left the force in this year, going to Edmonton and locating. A new fort had been built at Qu’Appelle, and Inspector Steele with D troop was in charge there for some time. Mjr. Crozier had been removed to Fort Macleod, and Capt. Winder who for some years had been in command there, left the force that year and went into stock ranching in the vicinity of Macleod, and started the ranche today known as the Winder ranche. He also built and stocked a trading store in the old village of Macleod, and did very well in business for some years, in fact until his death at Macleod in 1885. A good many men left the force about this time, many remaining in the country and taking up farms. It was in 1881 that the first large herd of cattle was brought to the country by the managers of the Cochrane Ranche Co., who were also the first to obtain a grazing lease from the Canadian government, on the Bow river in the neighborhood of Calgary. 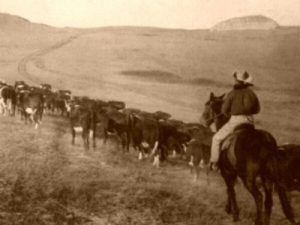 They bought their cattle in Montana and Oregon at low figures in those days, and they brought in this summer about 7,000 head; they had to employ American cowboys almost entirely to drive them in, many of these men- all first class cattle men- being permanently engaged by the Cochrane Co., and as other cattle companies were started many more came in and found good wages on the different ranches, the pay being from sixty to one hundred and twenty-five dollars per month. Major Walker, an ex-police inspector, who had come with us as far as the Sweet Grass hills in 1874 and who had been stationed at Fort Pelly until he left the force, was engaged as manager of the Cochrane ranche, whose headquarters at first were at Calgary, but he was a good deal across the line during the first year, buying and starting the herds of cattle north.

The year 1881 saw therefore the beginning of the stock industry, on a large scale, in this western section, and as time went on, many large cattle ranches, now paying well, were started in Southern Alberta. This summer matters were very busy in police circles. In July, after long negotiations, Sitting Bull and his band of refugee Sioux surrendered to the United States government at Fort Buford, on the Missouri river in Montana. For a long time the Canadian government had tried to forward this end. The Sioux, about six hundred and fifty lodges, had for the last year been put to great straits for food. The buffalo had disappeared, and, as our government had refused to feed them, they were in a bad way indeed, and had nothing left them but surrender or starve, and they chose the former. The commissioner, Col. Irvine, in his report to the government in 1882, says as follows:

“It is, I think, a matter of the utmost congratulation that the Canadian government has peaceably effected the surrender of a warlike and powerful nation of Indians, whose presence in our country has necessarily been a source of continual anxiety. In connection with this surrender I trust the government has every reason to be gratified with the manner in which its policy has been carried into effect by the force under my command.”

It will be remembered that in 1877, soon after the latter fight, Sitting Bull and his followers, numbering some hundred and fifty lodges, crossed the boundary line to seek shelter in British possessions. It was astounding with that rapidity the news of Sitting Bull’s safe arrival in Canada was transmitted to other branches of Sioux, who had up to this time remained in the United States. This news quickly had the effect of rendering out country attractive to the remainder of the hostile Indians who had taken part in the Custer fight; their numbers being augmented by large bands of Indians of the same tribe, who previously had been located on American reservations. In other words, a general stampede took place, and in an extremely short time Canada became the home of every Sioux Indian who considered himself antagonistic to the American government. In all they numbered some seven hundred lodges and these lodges being crowded it may safely be estimated that they contained eight souls to the lodge. Thus suddenly we had our Indian population increased in a very undesirable manner by some five thousand six hundred souls. In addition to Sitting Bull, we had such celebrated chiefs as Spotted Eagle, Broad Tail, Bear’s Head, The Flying Bird, The Iron Dog, Little Knife, and many others.

It will be seen by the above extract from the commissioner’s report that by this surrender we got rid of a very large band of strange Indians, and ones who were a thorn in the side of our own Indian tribes, with whom they had always been at war. It also took a great deal of laborious duty off the hands of the police, who constantly had to maintain control and supervision over them, more particularly during the hard and severe winters, when the travelling was at its very worst.

The police commissioner had in the year 1880 reported to the government that in his opinion the Sioux would in the end be forced to surrender, although much contrary opinion was held in Canada, and no doubt much underhand influence was brought to bear by traders and others to induce them to remain, which caused so long a delay in their ultimate surrender.

Therefore, in July, 1882, Sitting Bull with his camp moved south towards Fort Buford, to which post an officer of police had gone ahead to notify the American authorities of his coming with the intention of surrendering, which he did July 21.

He was afterwards sent south into exile and his band altogether broken up, being sent down, the majority of them, into the Indian Territory. Sitting Bull himself, as will be remembered, in 1890 headed another Indian rising and was shot by one of the government Indian scouts. Rain in the Face, the Sioux chief who killed General Custer, was also shot some years before while trying to escape from confinement at one of the American military posts.