The Adventures of Alexander Henry the Elder: Part 3

Continued from The Adventures of Alexander Henry the Elder: Part 2.

The narrow and swift-flowing Mattawa was a stark change from the wide and relatively placid Ottawa, and Henry and his crew were forced to make fourteen portages, some of them extremely difficult. The river’s shore was rocky and barren, stained red with hematite and punctuated by the occasional burial cairn. The blood-red hue of the riverbank and the Indian graves that dotted it gave the place an eerie atmosphere, augmented by the presence of a yawning black cave which Henry’s crew called “Porte de l’Enfer”, or Hell’s Gate.

“In the side of a hill,” wrote Henry of this sinister landmark, “on the north side of the river, there is a curious cave concerning which marvelous tales are related by the voyageurs”. Although Henry and his crew were fortunate enough to avoid meeting the demon whom fur trader lore designated the denizen of this stygian cavern, they were accosted by monsters of another sort. “Mosquitoes and a minute species of black fly abound on this river,” wrote Henry, “the latter of which are still more troublesome than the former. To obtain a respite from their vexations we were obliged at the carrying-places to make fires and stand in the smoke.”

Eventually, Henry and his crew reached Lake Nipissing, the headwaters of the Mattawa and the divide which separates the watershed of the Ottawa River with that of Lake Huron. After spending a very fruitful two hours fishing for pike and bass, they paddled over to the lake’s eastern shore, where they met and traded with canoe-going Nipissing natives.

When Henry and his men concluded their business on Lake Nipissing, they paddled to the lake’s western end, down the French River, and into Lake Huron, “which lay stretched across [their] horizon like an ocean”. 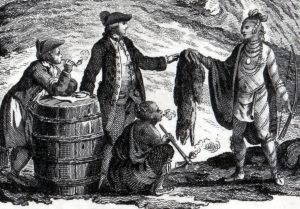 Henry and his companions rowed out into the massive lake, its “waves running high from the south, and breaking over numerous rocks”. They passed many islands, including one that the voyageurs called “La Cloche”, or “The Bell”, for the large quartzite rock that stood on it which, upon being struck by a rock, rang like a bell across the lake. The men spent some time on La Cloche, where they found an Indian village. The voyageurs bartered some of their trade goods for fish and dried meat. When they learned that Henry was an Englishmen, they proclaimed that the Ojibwa of Michilimackinac would certainly murder him. That done, they extorted a barrel of rum from him.

Nearly every native that Henry had encountered on his journey to Lake Huron had warned him of the Ojibwa’s hatred of Englishmen. Taking the advice of Etienne Campion, one of his voyageurs, he endeavoured to pass himself off as a French-Canadian when he arrived in Michilimackinac. “To this end,” wrote Henry, “I laid aside my English clothes and covered myself only with a cloth passed about the middle, a shirt hanging loose… a blanket coat, and a large, red, milled worsted cap.

“The next thing,” Henry continued, “was to smear my face and hands with dirt and grease; and this done, I took the place of one of my men, and when Indians approached, used the paddle with as much skill as I possessed. I had the satisfaction to find that my disguise enabled me to pass several canoes without attracting the smallest notice.”

The Island of Michilimackinac

Alexander Henry and his voyageurs paddled along the northern end of Lake Huron to the mouths of the Mississagi River. After purchasing fish from canoe-going natives, they paddled south across Lake Huron to the island of Michilimackinac (known today as “Mackinac Island”), which translates to “The Great Turtle”. There, they came to an Ojibwa village which boasted about a hundred warriors. To Henry’s dismay, the Ojibwa braves surrounded their canoe and asked if there were any Englishmen aboard. When the voyageurs assured the natives that there were not, they allowed them to continue south to the mainland. Before they did, however, one native looked directly at Henry, laughed, and pointed him out to one of his companions. “This was enough to give me some uneasiness,” wrote Henry, “but whatever was the singularity he perceived in me, both he and his friend retired without suspecting me to be an Englishman.”

Continued in The Adventures of Alexander Henry the Elder: Part 4.