The Curse of Oak Island- Season 7, Episode 21: A Leaf of Faith

The following is a plot summary and analysis of Season 7, Episode 21 of the History Channel’s TV series The Curse of Oak Island.

While the Irving Equipment Ltd. crew fills in Borehole 8A, which was terminated in the previous episode, the Oak Island crew meets in the War Room with geophysicist Jeremy Church of Eagle Canada. Church, who has had the opportunity to study the data collected during the seismic scan carried out in Season 7, Episode 6, shows the crew diagrams depicting various underground anomalies on the eastern half of Oak Island. First, the geoscientist shows the crew a representation of the Money Pit area on a screen. “Each one of these…” Church says, hovering his cursor over various irregularities, “these are all little disturbances- probably searcher tunnels. But within there, there’s a subtle, little anomaly.” Church then indicates a 13’ x 13’ feature located at the centre of the Money Pit area at a depth of 160 feet. He calls this feature the “Teardrop”, and reveals that the H8 shaft intersected its southern end. The narrator then remarks that this feature brings to mind the original Money Pit, which was said to have a diameter of 13 feet, and attempts to equate it with the Chappell Vault, which H8 is believed to have grazed and possibly pushed to the side.

Later that day, Rick Lagina, Doug Crowell, Billy Gerhardt, and Scott Barlow meet with botanist Dr. Roger Evans of Acadia University at the Eye of the Swamp. There, they show the scientist the largest of the three oak stumps unearthed in the area in Season 7, Episode 16. Dr. Evans extracts some bark from the stump and promises to examine it at his lab, remarking that the ease with which he removed the material reminds him of cork oak, a tree native to Portugal. The narrator proceeds to suggest that Portuguese explorers, or perhaps the Portuguese Knights of Christ- groups around which various Oak Island theories revolve- may have planted cork oak trees on Oak Island for some purpose. Scott Barlow then discloses that he has always believed the mysterious oak trees which once grew on Oak Island were intentionally planted as markers by the original treasure depositors.

The next day, the Oak Island crew meets in the War Room with Lee Lamb and Richard Restall, the children and siblings, respectively, of former Oak Island treasure hunters Robert and Bobby Restall. The Lagina brothers show the Restall siblings a variety of artifacts they discovered on the island over the years which seem to indicate human activity predating the 1795 discovery of the Money Pit. Lee then tells the treasure hunters about an incident which took place during her family’s Oak Island tenure. As Lee tells it, Robert and Bobby Restall’s first operation on Oak Island was the excavation of a trench on Smith’s Cove. On the morning following their first day of digging, the Restall father and son found their trench filled with water. Floating on the water’s surface was a leaf and a cluster of acorns. For some reason, Robert Restall formed the opinion that the leaf was not from one of the so-called “canopy oaks” for which the island was named, but rather a piece of the mysterious coconut fibre-eelgrass filtration system believed to prevent the Smith’s Cove box drains from becoming flooded with sand and debris. “It was part of the filtration system,” Lee says, “and it was coming from underneath. They used eelgrass, coconut fibre… and sometimes branches.” Lee then presents the treasure hunters with two envelopes, one of them containing leaf in question, which the Restalls had pressed so as to preserve it, and the other containing some of the acorns which Robert and Bobby had recovered from Smith’s Cove. Marty Lagina thanks Lee and Richard for bringing the specimens and informs them that the team with have them analyzed by Dr. Roger Evans.

Following the War Room meeting, Rick Lagina drives Richard Restall to the dilapidated remains of the old Restall shack, which Fred Nolan transported years ago onto his own property. Inside the ruins, Richard describes the bygone furnishings which once transformed the former tool shed into his family’s Oak Island home, pointing out the corner where the radio once stood and the spot where his bunk used to be. “That was the sum total of our existence,” he concludes, after describing how he would spend his evenings reading while his brother, Bobby, wrote letters or entries in his journal. “That was it. It was pretty Spartan.”

Following Richard Restall’s tour, Doug Crowell and Scott Barlow, who have since joined the two Ricks, reveal that they intend to refurbish the shack and return it to the state in which it existed while it served as the Restall family home. “Keep it as sparse as you can,” Richard advises, “because there was nothing fancy about that shack.”

The next day, the Lagina brothers, Craig Tester, and Dr. Roger Evans meet with Lee Lamb and Richard Restall in the Oak Island Research Centre. There, the treasure hunters show Dr. Evans the leaf and acorns with which the Restall siblings provided them during their War Room meeting. The botanist compares the Restall acorns with local red oak acorns and concludes that the two derive from different species of oak, conceding the possibility that the Restall acorns may have derived from a type of oak which someone brought to Oak Island and planted long ago. When prompted by Richard Restall, Dr. Evans expresses his belief that the Restall acorns could not have floated across the Atlantic Ocean from Europe or Africa due to their poor resistance to the deleterious effects of salt water. Unfortunately, the botanist declares that it is unlikely the team will be able to extract any DNA from the Restall acorns for identification purposes due to their advanced age.

Rick and Marty Lagina then drive the Restall siblings to the Money Pit area, where the rest of the team is preparing to sink a caisson on the Teardrop anomaly introduced earlier in the episode. Rick informs Lee and Richard that the team has decided to name this caisson ‘RF1’, an acronym for “Restall Family 1”, in honour of the Restall family’s contributions towards the Oak Island treasure hunt. The treasure hunters look on as Lee and Richard start up the oscillator, initiating the sinking of RF1. 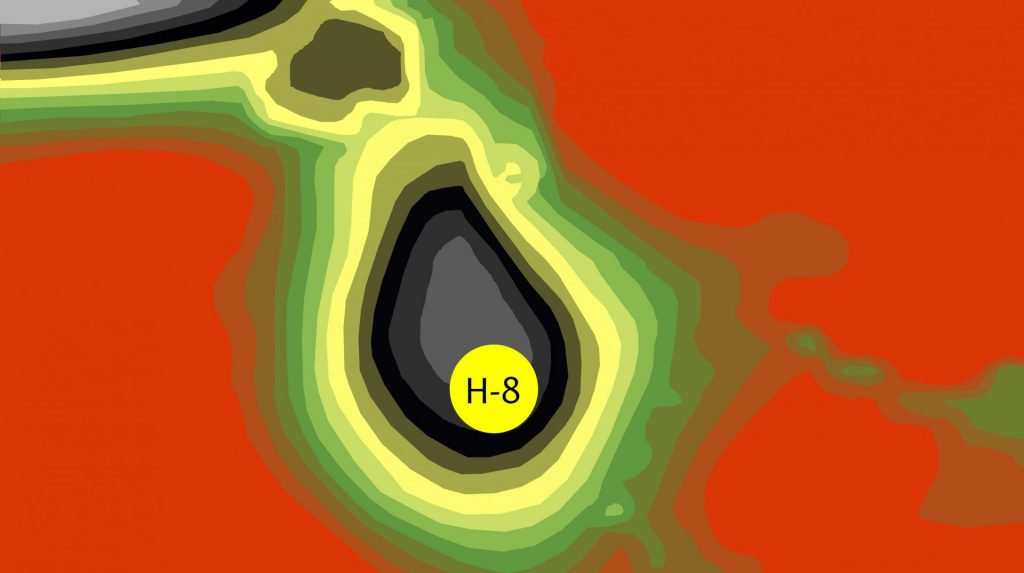 The Fellowship of the Dig resumes the excavation of RF1 the following day. At a depth of 86 feet, the shaft encounters timbers, which Craig Tester suggests are part of the Chappell Shaft. When the shaft reaches a depth of 100 feet, Gary Drayton begins examining each load of material removed from the caisson with his metal detector. Following Gary’s preliminary examination, the spoils are transferred to a wash table, where they are manually washed and sifted through by Jack Begley and Steve Guptill. At the wash table, Steve Guptill finds a shard of red pottery. “That’s really old pottery, Steve,” Jack says. “Look at how thick it is! The thicker, the older, too, and that’s the thickest pottery I’ve seen at this wash table.”

Shortly after Steve Guptill’s discovery, Gary Drayton finds the upper half of an old pickaxe in a batch of RF1 spoils brought up from a depth of 90 feet. Gary shows Terry Matheson his find before calling over Rick and Marty Lagina. Gary remarks that this artifact appears to have the same style as the pickaxe he discovered at the Eye of the Swamp in Season 7, Episode 13, which Carmen Legge, in Season 7, Episode 14, dated from the mid to late 1700s. “It’s a cool artifact,” says Marty of the pick in a later interview. “I can tell you without going to the venerable Carmen Legge. It was probably built long ago.” Unfortunately, since the pick was found at a depth of 90 feet, it probably constitutes the leavings of a previous searcher rather than that of an original depositor.

Below the 100-foot depth, the hammergrab brings up loads of large hand-cut timbers, which the treasure hunters set to the side. One of these timbers has a wooden dowel protruding from its end, evoking the wooden pegs found in the U-shaped structure. The artifact’s resemblance to the Smith’s Cove feature is further enhanced when Gary Drayton discovers what appears to be the Roman numeral ‘II’ carved into the wood. The treasure hunters speculate that this timber and the others like it might have been left by the original Money Pit depositors and agree to have them dendrochronolically tested.

In this episode, geoscientist Jeremy Church of Eagle Canada showed the Oak Island crew the results of the seismic survey carried out by Eagle Canada in Season 7, Episode 6. On a diagram of the Money Pit area, he pointed out a 160-foot-deep 13’x13’ anomaly he calls the “Teardrop”, and revealed that Borehole H8 intersected the southern end of this feature.

This scene is reminiscent of Season 6, Episode 3, in which Jeremy Church showed Rick and Marty various diagrams based off seismic survey data collected in Season 6, Episode 1. In that episode, Church pointed out a 10-foot-tall anomaly in the Money Pit area which lay at a depth of 160 to 170 feet- essentially, the same feature as the “Teardrop” anomaly introduced in this episode. The feature appeared to be a cavern in the hard limestone, the edge of which Borehole H8 apparently clipped. Oak Island Tours Inc. searched for this supposed cavern via exploration drilling in Season 6, Episode 4 and recovered a fragment of possible coconut fibre and a piece of axe-hewn wood at a depth of 170 feet from a drillhole called H7.5.

In Season 6, Episode 12, Mike Roberts and Joey Rolfe of Divetech Ltd. lowered a camera-equipped ROV into H8, with which they conducted a sonar scan of the anomaly. At a depth of 170 feet- the bottom of the alleged cavity- the scanner picked up what appeared to be the right-angled corner of a void. Before the operation could be completed, the scanner and camera malfunctioned and the ROV filled with water, becoming the most recent additions to a long list of unexplainable equipment failures on Oak Island.

The Oak Leaf and Acorns

In this episode, Lee Lamb and Richard Restall showed the Oak Island team a pressed oak leaf and a handful of acorns which their father had retrieved from a flooded exploratory trench he dug at Smith’s Cove. According to Lee, Robert Restall believed that these items did not come from a local red Oak, but had rather floated up from the Smith’s Cove filter. Botanist Dr. Roger Evans examined these specimens and concluded that they do not belong to the same species of red oak endemic to that part of Nova Scotia.