The Curse of Oak Island- Season 7, Episode 20: Springing the Trap

The following is a plot summary and analysis of Season 7, Episode 20 of the History Channel’s TV series The Curse of Oak Island.

The episode begins at the Money Pit area, where the sinking of caisson 8A is underway. The shaft reaches a depth of 78 feet without incident, passing through what appears to be in situ soil.

Meanwhile, Alex Lagina, Gary Drayton, and Billy Gerhardt dig an exploratory trench between the Eye of the Swamp and the Paved Wharf. Less than a foot below the surface, they uncover a layer of large rocks embedded in clay, which Gary suggests might be a continuation of the Paved Area. The boys then do some metal detecting in the trench and come across two long, thin iron rods bearing resemblance to the pieces of primitive rebar found near the slipway in Season 7, Episode 11, and to the crib spikes discovered at Smith’s Cove throughout Seasons 6 and 7. Gary remarks that these artifacts, which are the first of their kind to be discovered in the Oak Island swamp, constitute evidence of tunneling or shaft-building in the area, similar to the pickaxe head found at the Eye of the Swamp in Season 7, Episode 13. He then suggests that they show the artifacts to Carmen Legge.

Alex, Gary, and Billy continue digging and quickly come across several pieces of charred wood. The narrator then reminds us of the theory, introduced in Season 7, Episode 14, following the discovery of the scorched metal bracket in the northern section of the swamp, that a sailing ship was burned centuries ago in the swamp. Gary Drayton suggests that they show the wood to Dr. Ian Spooner, while Alex Lagina suggests that they have the pieces carbon dated.

The three treasure hunters then call over Rick and Marty Lagina and show them their recent swamp discoveries. Marty confidently identifies one of the metal rods as a crib spike, concurring with Gary Drayton’s earlier assessment, and expresses surprise that such an object would be found in the swamp. “What does it mean?” he asks, clearly frustrated by the discoveries’ mysterious implications.

The next morning, the Oak Island crew congregates at the Money Pit area to watch the sinking of Borehole 8A. At a depth of about 103 feet- five feet shy of the approximate target depth, the suspected location of the Shaft 6 tunnel- the caisson encounters some resistant material

which caisson operator Danny Smith believes to be wood. The next hammergrab load indeed contains a handful of splintered wood, to Danny’s obvious delight. Certain that 8A has intersected the Shaft 6 tunnel, the treasure hunters extract several more hammergrab loads from the caisson, which they scan with a metal detector before washing by hand. The spoils yields many tiny scraps of leather, evoking the leather fragments recovered from Borehole H8 throughout Seasons 5 and 6, as well as the leather piece found in Borehole S6 in Season 6, Episode 17. The narrator then reveals that 8A lies ten feet southeast of H8. 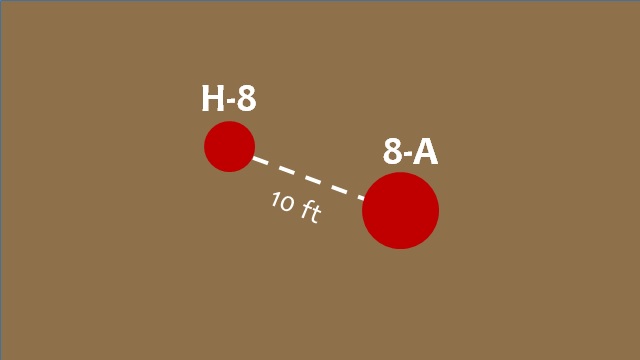 The crew continues to excavate 8A, finding a large hand-cut piece of oak at a depth of 114 feet. Gary Drayton then examines the spoils with his metal detector. “Talk about finding a needle in a haystack,” he says as he retrieves what he identifies as a sail cloth needle from the muck.

The next day, Marty Lagina, Alex Lagina, and Gary Drayton drive to the Ross Farm Museum, where they show Carmen Legge the thin iron rods they found in the swamp. The blacksmithing expert identifies the longer of the two artifacts as a tine from a “long fork or a seaweed fork or a moss fork”. He then suggests that the shorter rod, which is tapered at both ends, might be a marlinspike- a tool used for nautical rope work and rope repair. The narrator subsequently attempts to connect the possible marlinespike with the theory that a sailing ship was burned or buried centuries ago in the Oak Island swamp. Finally, the treasure hunters show Legge the needle-like object found at a depth of 114 in Borehole 8A. Although the blacksmithing expert initially declares that he has no idea what the object is or what it was doing at depth in the Money Pit area, he later opines that it is too large to be a sailing cloth needle, and suggests that it might have served as a spike in a trou de loup-type booby trap.

Later, while the Oak Island crew gathers at the Money Pit area to oversee the completion of Borehole 8A, Jack Begley and Steve Guptill manually wash some of the spoils already extracted from the shaft at a wash table. Steve finds a piece of what appears to be hand-wrought metal, which Jack suggests might be a piece of a hinge. The treasure hunters are then joined by Laird Niven, who independently, tentatively identifies the object as part of a strap hinge.

Back at the Money Pit area, the treasure hunters sink the 8A caisson to a depth of about 165 feet. The last few hammergrab loads contain nothing but water, prompting the Fellowship to abandon the hole.

The Fork Tine and the Marlinespike

In this episode, Gary Drayton and Alex Lagina discovered two thin iron objects in the Oak Island swamp between the Eye of the Swamp and the Paved Wharf. Although the objects bear some resemblance to the crib spikes found at Smith’s Cove throughout Seasons 6 and 7, and to the rebar found near the slipway in Season 7, Episode 11, blacksmithing expert Carmen Legge identified one of them as the tine of a long fork, and the other as a marlinespike- a tool used for nautical rope work and rope repair.

Leather in the Money Pit

In this episode, Oak Island Tours Inc. recovered many tiny scraps of leather from a depth of 103 feet in Borehole 8A, the suspected location of the junction of the Money Pit and the Shaft 6 tunnel.

These are not the first pieces of leather to be found on Oak Island. Throughout Seasons 5 and 6, the crew discovered fragments of leather in Borehole H8, some of them at a depth of 162 feet. At least one of these fragments was determined to be vegetable-tanned book binding through which sheepskin parchment was woven. Strikingly similar to the events of this episode, the crew also found leather at a depth of 101 feet in Borehole S6 in Season 6, Episode 17, at what was then suspected to be the confluence of the Money Pit and the Shaft 6 tunnel.

In this episode, the crew discovered an iron needle at a depth of 114 feet in Borehole 8A. Although Gary Drayton initially identified the artifact as a sail cloth needle, blacksmithing expert Carmen Legge suggested that the artifact might have served as a spike in a trou de loup-type booby trap at the bottom of the Money Pit.