The Curse of Oak Island: Season 6, Episode 12- Slipway When Wet

The following is a Plot Summary and Analysis of Season 6, Episode 12 of the History Channel’s TV series The Curse of Oak Island.

The Lagina brothers, Craig Tester, and Dan Blankenship gather at the Money Pit area, where Irving Equipment Ltd. is busy re-excavating Borehole H8. The hammergrab has encountered a hard granite-ridden ‘plug’ at the bottom of the shaft, which the team will need to break up and remove in order for further excavation to take place. The treasure hunters decide to initiate this process by starting up the oscillator, which drives the H8 caisson further into the earth.

That afternoon, the crew congregates in the War Room, where they call up runology expert Dr. Lilla Kopar and ask for her opinion of the inscription on Tory Martin’s stone. Kopar explains that she will need detailed pictures of the inscription in order to make an informed opinion, whereupon Alex Lagina offers to send her 3D model of the stone produced by the LIDAR scan carried out in Season 6, Episode 10.

The next day, Rick Lagina and Craig Tester join the crew of Irving Equipment Ltd. at the Money Pit area. The plug at the bottom of H8 has been removed, and so the treasure hunters decide to lift the caisson up in order to fill the void with the surrounding mud, which they hope will contain the artifacts that eluded them the previous season.

Before they carry out this operation, however, they first decide to conduct a sonar scan of H8 in order to investigate the 10-foot-tall, 160-foot deep cavern indicated by results of the seismic scan introduced in Season 6, Episode 3. Mike Roberts and Joey Rolfe of underwater survey company Divetech Ltd. arrive on the island and lower a camera-equipped ROV (remote operated underwater vehicle) into H8. The crew stands by on the surface, watching a screen displaying the results of the ongoing sonar scan.

At a depth of 170, the scanner picks up what appears to be the right-angled corner of a surrounding cavity. “Angular features in nature are always interesting to look at,” explains Rick Lagina in a later interview, “because angles usually are reflective of human intervention- some sort of human construct- so there’s the hope that it’s an association with some sort of room or cavity or void.” 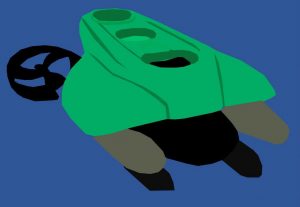 The image on the monitor suddenly flickers and fades, whereupon Mike Roberts informs the crew that the sonar scanner has inexplicably malfunctioned. Anxious to continue the scan, the crew asks Mike to pull up the ROV, fix whatever can be fixed, and lower it back down again as soon as possible. In a later interview, Rick and Marty Lagina express their frustration with the setback and remark that it is just the latest in a long line of unexplainable equipment failure on Oak Island. The ROV is winched back to the surface, whereupon the crew learns that it has flooded with water, and is therefore no longer operable.

Later, the crew meets in the War Room to hear Dr. Lilla Kopar’s assessment of the Martin stone. Kopar informs the crew that the inscription on its surface is probably not runic, as runes were typically bounded by horizontal lines on the top and bottom; the inscription on the Martin stone has only one horizontal line. She further states that she “could not identify a single character that was runic. So my conclusion would be that these are not runes.”

Kopar then offers the crew a glimmer of hope by stating that “the rhythm of the carving” is evocative of some sort of script. She then suggests that the inscription evokes textualis rotundra, a type of Gothic script widely used throughout Western Europe from the 12th to the 15th Century. In a later interview, Rick Lagina remarks that the period in which textualis rotundra was used corresponds with Tobias Skowronek’s pre-15th Century dating of the lead cross. Copar concludes her analysis by echoing Terry Matheson’s initial suspicion that the stone likely served an architectural function.

Later, Rick Lagina, Gary Drayton, and Dan Henskee head to the woods near the Money Pit area to search for the second half of the Martin stone, which appears to have broken off sometime in the past. Drayton, using his metal detector, soon discovers a coin, which Rick Lagina suggests might be a bronze of copper token.

Shortly after the find, Rick Lagina gets a call from Laird Niven, who informs him of an interesting structure that he, Terry Matheson, and Billy Gerhardt recently unearthed at Smith’s Cove. Rick heads to the beach, where Laird shows him the new discovery- an underground wall of concrete located a short distance from the slipway. Rick remarks that “the Romans had concrete that could set underwater”, and suggests that the concrete block could “be incredibly old”. The treasure hunters marvel at the discovery, consider whether it might be connected with the nearby slipway, and discuss the possibility that it constitutes original work, as there is no record of previous searchers having created such a structure.

In this episode, Mike Roberts and Joey Rolfe of Divetech Ltd. conducted a sonar survey of Borehole H8 using an ROV in order to investigate the 10-foot-tall, 160-foot deep cavern indicated by results of the seismic scan introduced in Season 6, Episode 3. At a depth of 170 feet, the scanner indicated the presence of a surrounding chamber, the nearest wall of which had the unnatural-looking angle of 90 degrees. Shortly thereafter, the ROV malfunctioned, evoking the scores of mysterious equipment failures that have occurred on Oak Island at the brink of potentially major breakthroughs.

In this episode, runology expert Dr. Lilla Kopar examined the markings on the Martin stone and concluded that they were probably not runes. She then suggested that the markings evoked the “rhythm” of textualis rotundra, a particular type of Gothic script used during the High Middle Ages, from the 12th to the 15th Century.

It is an interesting coincidence that one of the inscribed stones from Joudrey’s Cove bears markings that could be interpreted as letters from the Gothic alphabet, a Greek-derived alphabet used for writing the Gothic language (used by the Goths, a Dark Age East Germanic people who played an important role in the fall of the Western Roman Empire), which, it must be mentioned, has little connection with Gothic script aside from its name.

At the end of this episode, Laird Niven and Billy Gerhardt discover a concrete wall buried at Smith’s Cove adjacent to the mysterious slipway discovered the previous episode. There are no records of previous searchers having built this structure, suggesting the possibility that it constitutes the work of the original depositors.

If true, the underground wall at Smith’s Cove is not the only original working to be composed of concrete. In the summer of 1897, the Oak Island Treasure Company drilled through what they believed to be a concrete vault (dubbed the “Chappell Vault”) in the Money Pit at a depth of 154-161 feet. In 1909, the Old Gold Salvage and Wrecking Company drilled through 6-10-inch-thick layers of cement from 146-149 feet in the Money Pit. And in Season 2, Episode 4, the crew brought up a core sample containing a hard concrete-like substance from a depth of 140-142 feet.

The concrete discovered on Oak Island does little to narrow down the list of suspects implicated in the creation of the Money Pit, as most potential candidates, from the Romans to the Aztecs, are known to have used some form of concrete in their architectural projects.