Some years ago, how many I cannot exactly say, a war party of thirteen Cree braves, led by Pish-eesh, or Little Link, a Saulteaux Indian and a noted chief, came on a foray to the plain of Medicine Hat from the direction of Qu’Appelle. They were, as usual, after the ponies and the scalps of the Blackfoot. 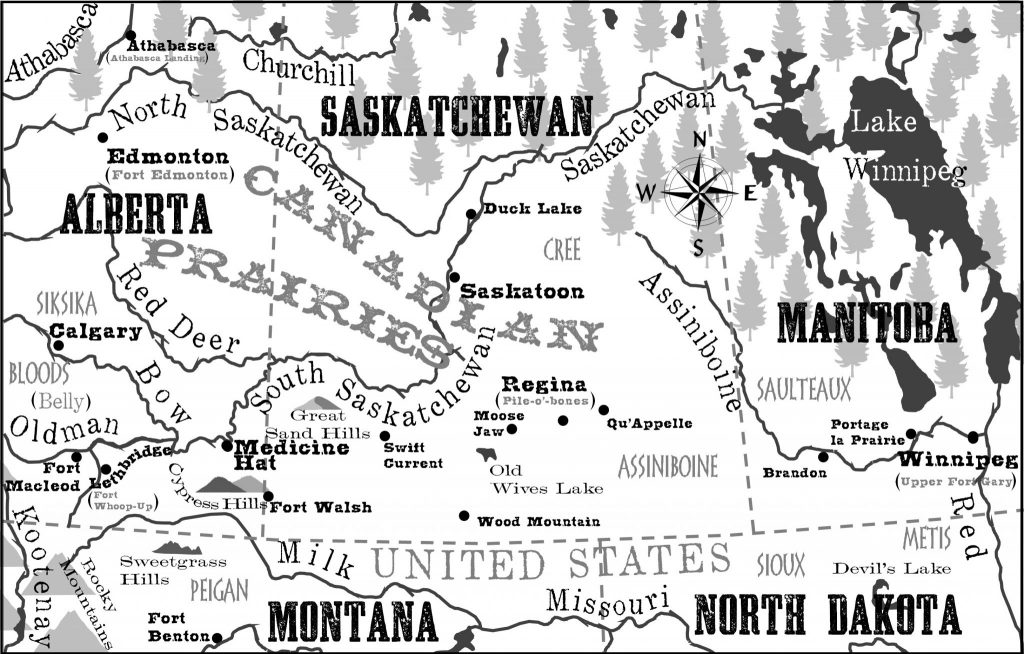 They came on a camp of their enemies, situated at a point about three miles from Medicine Hat, and succeeded in stealing all the ponies by daylight and got away without being discovered. There is no doubt but they could have secured such a start as to have easily distanced any pursuit, had it not been for an act of bravado on the part of a young Cree brave (afterwards a prominent figure in the rebellion of 1885) named Kit-u-way-py, or Jingling Thighs. He was spoiling for a fight and when the rest of the band started off with the horses, he lingered in the rear and fired off his gun two or three times to give the Blackfoot the alarm. He succeeded in producing the desired effect and soon every brave in the Blackfoot camp was in hot pursuit of the raiders.

They overtook them within half a mile of where the town now stands. The Crees were making hard for cover in a patch of timber that then grew along the bank of the river. They did not, however, succeed in making cover before their pursuers were upon them and a stubborn stand was made in a coulee, some distance from the timber.

Pish-eesh, seeing that his men would be soon surrounded and almost certainly either killed or captured unless they got into the timber, told them to make a dash for it. He said that he, together with Jingling Thighs and a warrior named Kin-u-sayo, or The Fish, would stand off the enemy from the shelter of the coulee until the others should reach the timber. The braves, accordingly, started for the cover, but before they reached it, three of their number fell by the bullets of the Blackfoot.

Pish-eesh and his two companions began to be sore pressed and were in momentary danger of having their retreat cut off when Kin-u-sayo, seeing that the rest of the Crees had reached shelter, told his comrades to break for cover and he would keep the foe in play until they were in safety. Very unwillingly they finally agreed, and started for the timber. They had only gone a short distance when a bullet broke Kin-u-sayo’s left thigh and he had to drop to the ground. Straightening the broken limb as best he could, and flinging his gun away, his ammunition being spent, he dumped his quiver by his side. Then, shouting to his friends that he would not travel alone to the happy hunting grounds but would have an escort of Blackfoot, he sent arrow after arrow with deadly aim, into the crowd of enemies. This discouraged them from making what was regarded as a great coup, namely, scalping him alive.

Three Blackfoot fell by the arrows of Kin-u-sayo, before he had exhausted the quiverful. Then he threw his bow aside and drew his knife. He shouted to his assailants that he had only that to defend himself with now, and that they had better come on and make short work of the affair, for they would never get his hair while he was alive. Then they shot at him from all directions. Such was the fear with which he had inspired them by his dauntless bearing that not one of them dared tackle him at close quarters, crippled though he was. At last Kin-u-sayo fell, literally riddled with bullets, and they took his scalp.

Pish-eesh and Kit-u-way-py reached the timber and joined the rest of their band. When night fell, they got safely away, taking the ponies of the Blackfoot with them. But they returned to their lodges without scalps and left those of the three braves who fell as they were making for the timber, and that of the dauntless Kin-u-sayo, in the hands of the Blackfoot.