The Adventures of Alexander Henry the Elder: Part 11

Continued from The Adventures of Alexander Henry the Elder: Part 10.

Lake Superior and the Canadian Northwest

In the spring of 1765, Alexander Henry acquired a permit to trade for furs on the vast northwesterly Lake Superior, becoming the very first Englishman to hold such a permit. Outfitting himself at Michilimackinac, he and twelve newly-hired employees paddled their canoes up to Sault Ste. Marie, where they were joined by Jean Baptiste Cadotte, and further up the St. Marys River to Lake Superior.

The adventurers paddled west across the lake, reaching the mouth of the Ontonagon River on August 19th. Henry explored the lower reaches of this river, coming across the Bond Falls, a school of monstrous sturgeon, and an abundance of pure raw copper. Returning to Lake Superior, he continued west to a great Ojibwa village called Chagouemig, located in what is known today as the Chequamegon Inlet, which Henry described as “the metropolis of the Chippewa”. The villagers were starving and poorly clothed, the commerce on which they relied having been interrupted by Pontiac’s War, and so, at their chief’s request, Henry supplied them with goods on credit.

Henry decided to spend the winter at Chagouemig and built a cabin and trading post there for himself and his men. Throughout the season, the fur traders subsisted almost entirely on trout and whitefish, although, on one occasion following a successful bear hunt with the Indians, they were each obliged to eat about twenty pounds of bear meat in a single day in accordance with a particular Ojibwa superstition.

Henry’s trading relationship with the local Ojibwa began on a rocky start. The first visitors to his trading post threatened to steal his goods. While his employees meekly stood by, Henry seized a firearm and declared that he would shoot the first man to lay a hand on his goods. Realizing that Henry would not be bullied, the Ojibwa softened their hostile demeanor and began to peaceably exchange their furs for Henry’s goods.

“The Chippewa of Chagouemig,” Henry wrote, “are a handsome, well-made people; and much more cleanly, as well as much more regular in the government of their families, than the Chippewa of Lake Huron. The women have agreeable features and take great pains in dressing their hair, which consists in neatly dividing it on the forehead and top of the head and in plaiting and turning it up behind. The men paint as well their whole body as their face; sometimes with charcoal, and sometimes with white ocher; and appear to study how to make themselves as unlike as possible to anything human. The clothing in which I found them, both men and women, was chiefly of dressed deer-skin, European manufactures having been for some time out of their reach. In this respect, it was not long after my goods were dispersed among them before they were scarcely to be known for the same people. The women heightened the color of their cheeks, and really animated their beauty, by a liberal use of vermilion.” 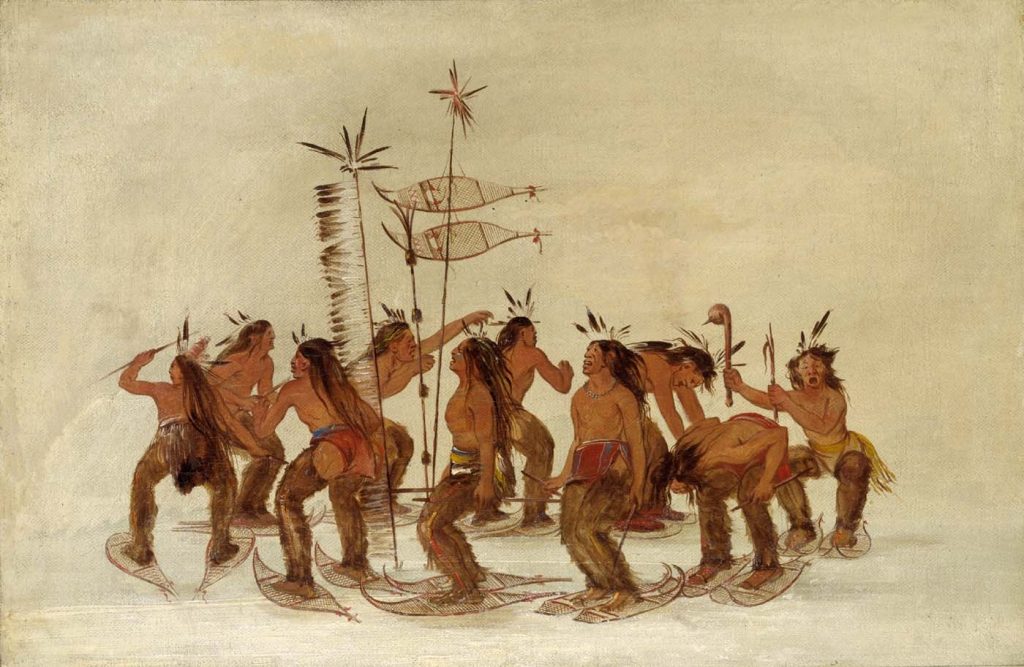 On April 20th, 1766, the ice began to melt, and a number of Ojibwa warriors set out on their war path against their hereditary enemies, the Eastern Dakota Sioux. They encountered a Sioux band on May 15th and engaged their warriors in battle. During a lull in the fighting, the Ojibwa dressed and painted their fallen comrades, as was customary at that time, in preparation for their eventual scalping by the enemy. That accomplished, they retreated a short distance in order to allow the Sioux to collect the scalps of their friends and relatives. “We consider it an honour,” one Ojibwa explained to Henry, “to have the scalps of our countrymen exhibited in the villages of our enemies in testimony to our valor.” When the Ojibwa warriors advanced again, hoping to reengage the enemy, they found that the Sioux had fled without stopping to scalp their fellow tribesmen- a breach of martial etiquette by which the Ojibwa were deeply offended.

After the warriors’ return, Henry and his men loaded the pelts they had acquired into canoes and made the long journey back to Michilimackinac to trade them in.

Continued in The Adventures of Alexander Henry the Elder: Part 12.