It was a lovely summer day in 1906 when a traveling salesman, Peter Lymburner Robertson, was demonstrating a spring-loaded screwdriver.  As usual, if a demo can go wrong it will, and Robertson cut his hand when the screwdriver slipped.  It is not known if he made the sale or not, but the incident did drive Robertson to invent a better screw driver. Robertson developed the socket head screw which revolutionized an industry.  The Robertson screw and screwdriver, the best kept secret outside of Canada, were born.

“This is considered by many as the biggest little invention of the twentieth century so far,” he was heard to exclaim. His special square-headed screw and driver had a tighter fit than a slot and rarely slipped.  Robertson also developed a machine to make his screws (see image below).

The Robertson socket head screw soared in popularity. Craftsmen favored it because it was self-centering and could be driven with one hand. Industry came to rely on it for the way it reduced product damage and sped up production. The Fisher Body Company, which made wooden bodies in Canada for Ford cars, used four to six gross of Robertson screws in the bodywork of the Model T.  Eventually Robertson produced socket screws for metal, specifically for the metal bodied Model A.

If the square screw was superior, why do you not find them outside of Canada?  Why, if Ford thought it was good enough for his Model T and Model A, was it not good enough for the rest of the world?

There is a lesson to be learned here for inventors.

When testing the Robertson screw for their assembly line, Ford found that they could save upwards of 2 hours of assembly time per vehicle.  Ford, wanting to protect his assembly advantage, asked for a licensing agreement from Robertson so that he could manufacture and control the distribution of the screws. 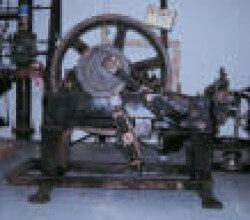 Robertson had expanded, by this time, into Europe.  But his fortunes turned bad when the war (WW1) started.  His European partners turned out to be less than honorable.

However, he was riding the euphoria of a blossoming product.  Despite his losses in Europe, he felt that giving a license to Ford would not be in his best interest.

Shortly afterwards a guy by the name of Phillips had no such reservation over licensing to Ford and, as they say, that was that!

The Robertson Screw Company was headed by Robertson until his death in 1951.  It has grown to over 600 employs, including 120 in Robertson’s home town of Milton, Ontario.