Since the launch of the hit TV show “The Curse of Oak Island” on The History Channel, one of the most asked questions is “Where is Oak Island”?

The Island is located off the coast of Nova Scotia near Halifax.  Even though it is and island, it is connected to the main land by a bridge.  It is the focus of a very long mystery related to hidden treasure.  I have always been interested in treasure hunting and have been watching the History Channel’s series for the last couple of years.  We have also written a couple of articles about the island and the mystery surrounding it, you can read them here:

The Curse of Oak Island: The History Channel 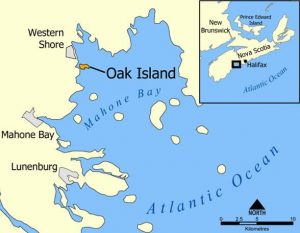 Where is Oak Island Map

When the show first started 3 years ago I was full of anticipation, however it has started to fade.  I’m starting to think the treasure is the TV Show.  Every week the teasers would lead you to believe that there is some big event that is going to lead to the big find, but as always every week ends with a dead end or a bigger mystery.  I’m starting to lose hope that there is really any hidden treasure, and in my opinion the only thing they are finding is the left over pieces of previous failed attempts to find something.  Last week they found a piece of a large wooden stake buried in the ground that was on a map of a former treasure hunter.  It was obviously left there from a previous search, but the show would lead you to believe it may have been there from the actual people that hid the treasure.  The theories about what might be hidden are vast and all over the place, so many that I have lost track.

Then again on the optimistic side, the show would be over if they find the hidden treasure.  But it does lead all newbies to the same question, Where is Oak Island.  So now you know, and it would probably be a cool place to visit on a summer vacation.