The following is a plot summary and analysis of Season 7, Episode 22 of the History Channel’s TV series The Curse of Oak Island.

The episode begins at the Money Pit area, where the excavation of Borehole RF1 is underway. The Fellowship of the Dig works feverishly to process the spoils, extracting old timbers and transporting the rest of the muck to the wash table. Some of the timbers are inscribed with Roman numerals, evoking the U-shaped structure. In a later interview, Rick and Marty Lagina explain that the large timbers extracted from RF1 are unlike those which comprise the Chappell or Hedden Shafts.

In RF1 spoils taken from a depth of about 120 feet, Gary Drayton discovers a strange iron crowbar-like device with a sharp hook on one end, which Rick Lagina suggests might have been used to maneuver timbers. The treasure hunters agree that they ought to show the artifact to Carmen Legge.

The next morning, Craig Tester and Alex Lagina drive to the Ross Farm Museum, where they show Carmen Legge some of the items they discovered in RF1. First, the blacksmithing expert examines the crowbar-like object and finds a “wear mark” on one side of the hooked end. “So, that tells me,” he says, “that it was sort of anchored into the wall of a rock formation… These would be driven into the roof or wall of a cave, and then lanterns or other working equipment like hoists and pulleys would be anchored on” the hook. When prompted by Craig Tester, Legge dates the artifact to the 1700s. 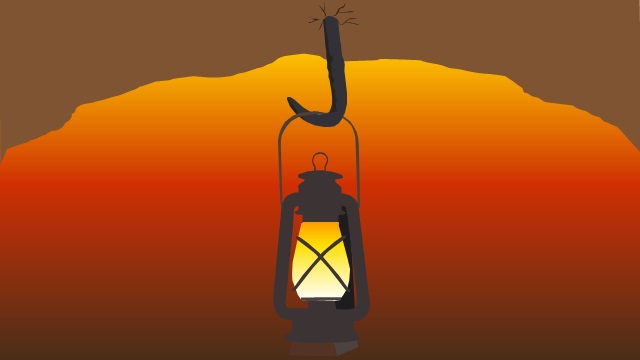 Next, Carmen Legge take a look at the pickaxe found at a depth of 90 feet in RF1 the previous episode. The blacksmithing expert identifies the artifact as a “very typical rock hammer” which would have been used in a tunnel or a cave, and declares that such an object could have been made as far back as the Middle Ages.

Back on Oak Island, Jack Begley and Steve Guptill search through 120-foot-deep RF1 spoils at a wash table. Jack picks out what appears to be a piece of rope. Shortly thereafter, he comes across a clump of coconut fibre. The treasure hunters are joined by Dan Henskee, whereupon Steve finds a mysterious black object, one side of which appears to be caked in concrete.

At the Money Pit area, the RF1 caisson reaches a depth of 160 feet- the neighbourhood of the Teardrop anomaly introduced in the previous episode. The hammergrab emerges from the caisson bearing a crumpled piece of sheet metal in its jaws. Doug Crowell identifies the object as a “shield” used in 1931 to protect the builders of the Chappell Shaft from falling debris.

As soon as the caisson begins its descent into uncharted territory below the Chappell Shaft, one of the brackets securing the oscillator to the hammergrab crane snaps due to the pressure. The contractors spend the rest of the day repairing the damage before resuming the excavation that evening. At a depth of 181 feet, the hammergrab brings up little aside from water. Vanessa Lucido informs the boys that the caisson is now advancing at a rate of 4 inches per hour due to some nether obstruction- probably limestone bedrock. “I have a super unconventional method we could try,” she says, before suggesting that they try raising the caisson five feet and setting the 50,000-pound hammergrab on top of it in an effort to slowly sink the caisson deeper into the obstruction. Rick and Marty Lagina agree to the proposal.

The following day, Rick Lagina, Charles Barkhouse, and Laird Niven drive to the foundations of Samuel Ball’s house on Oak Island’s Lot 25. The narrator informs us that Laird has acquired a permit to excavate the site in an archaeological manner, for which he said he would apply back in Season 7, Episode 18. After taking photographs of the site, the treasure hunters begin excavating the designated perimeters of the test pits with trowels. They are soon joined by Kelly Bourassa, Gary Drayton, and Jack Begley, who assist in the operation. Less than an inch below the surface, Bourassa uncovers a metal strip, which he identifies as hinge belonging to a building or a chest, as well as a metal bracket.

The next day, Alex Lagina, Billy Gerhardt, and Dr. Ian Spooner do some work in the Swamp’s Paved Area. Dr. Spooner extracts some wood taken from beneath the stones, which he hopes to carbon date. “This stick,” he says, “will tell me when that stone was placed”.

Back on Lot 25, Jack Begley, Charles Barkhouse, and Laird Niven dig on the GPR anomaly discovered in Season 7, Episode 18. Several feet below the surface, Jack Begley hits a layer of stacked stones which appear to lie atop some sort of cavity- apparently, the anomaly indicated by the GPR scan. The treasure hunters are soon joined by Rick Lagina and Billy Gerhardt, the former of whom enthusiastically designates this potential tunnel on the Ball foundation the long-coveted “one thing… for the Ball foundation”.

The next day, the boys excavate more of the cavity before showing it to Marty and Alex Lagina. The treasure hunters proceed to invite Derek Hale, the owner of a company called ‘The Septic Doctor’, to Oak Island. Hale produces a hose with a small camera on the end from his truck, telling the crew that he and his employees use this device to “scope sewer lines”. Hale lowers the camera into the cavity, revealing a long, narrow stone tunnel. At an undisclosed distance from the cavity’s entrance, the camera’s progress is impeded by a rock lying in the middle of the tunnel. The treasure hunters agree that they ought to excavate the tunnel by hand in order to find out where it leads. “It’s a complete mystery what this is,” says Marty Lagina, “but it can’t be a tunnel to nowhere. It just can’t be. Nobody would do that.”

In this episode, the Oak Island crew excavated the foundation of Samuel Ball’s home on Oak Island’s Lot 25, where GPR experts Steve Watson and Don Johnston discovered the presence of underground anomalies in Season 7, Episode 18. During the excavation, the treasure hunters uncovered a mysterious underground rock-lined tunnel which they plan to fully uncover in the future.

Thanks for reading! If you enjoyed this article and would like to help support this website, please check out our online bookstore: