The Curse of Oak Island: Season 6, Episode 13- The Paper Chase

The following is a Plot Summary and Analysis of Season 6, Episode 13 of the History Channel’s TV series The Curse of Oak Island.

The episode begins at Smith’s Cove, where the crew examines the mysterious concrete wall discovered at the end of the previous episode. After some light excavation with his trowel, Laird Niven uncovers two rubbery pipes protruding from the wall’s base, indicating that the structure was made by 19th or 20th Century searchers.

That afternoon, the crew congregates in the War Room. After discussing the strange new discovery, Marty Lagina suggests that perhaps the concrete walls is much older than the rubber pipes, and that previous searchers drilled through the structure and inserted the pipes into it after discovering it. Talk then turns to the slipway, located next to the concrete wall. Gary Drayton expresses his belief that the slipway constitutes original work, and will help lead them to the original Money Pit.

Later, Rick Lagina and Dave Blankenship pay a visit to the home of Dan Blankenship. There, they inform the elderly treasure hunter of the new discovery and ask him if he has any clue as to what it might be. Dan explains that the wall must have been constructed before 1950, as Robert Restall never built anything of the sort during his treasure hunt in the 1960s. He goes on to suggest that they have wood from the adjacent slipway carbon dated, as it is probable that whoever built the slipway either constructed or new about the concrete wall.

Next, the crew meets at the Money Pit, where Irving Equipment Ltd. is working H8. The contractors use the oscillator to lift the H8 caisson several feet before excavating the material that moved into the bottom with a hammergrab. The first hammergrab load, which comes from a depth of 168 feet, yields fragments of old wood, which Craig Tester suggests is part of the Chappell Vault. 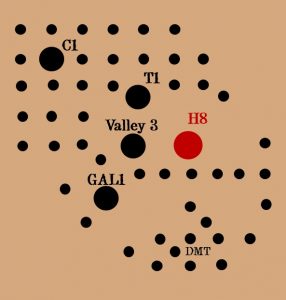 After a cursory examination, the H8 spoils are laid on a wash table and manually inspected by Jack Begley and Charles Barkhouse. After finding several more slivers of wood, Jack Begley discovers a handful of what appear to be blackened parchment fragments. Later on, he discovers a delicate white scrap of material which resembles paper.

Later that day, Craig Tester and Jack Begley meet with Doug Crowell and Paul Troutman at the Oak Island Research Centre. There, they examine the new material discovered in the H8 spoils under a digital microscope. One of the black scraps appears to be leather. Another piece of material, supposed to be parchment, has markings in yellow and red paint or ink. Doug Crowell suggests that the colour might be from a stylized initial, or drop cap, of an illuminated manuscript. The crew members agree that they ought to have the coloured pigments or dyes analyzed by an expert.

Later, the Oak Island crew meets with Randall Sullivan at the Money Pit area. The Lagina brothers and Sullivan walk down to the War Room, where the writer presents the treasure hunters with the first copies of his new book The Curse of Oak Island: The Story of the World’s Longest Treasure Hunt. Sullivan expresses his belief that his book is the “most authoritative and entertaining history of Oak Island”. He claims that his research led him to believe that the popular legend of the Money Pit’s discovery is accurate, and that he is partial towards the theory that Francis Bacon is the man behind the Oak Island mystery. He then sites a passage from Francis Bacon’s natural history book Sylva Sylvarum which instructs the reader to “dig a pit upon the Sea-Shore”, starting above the high water mark, to a point below sea level. 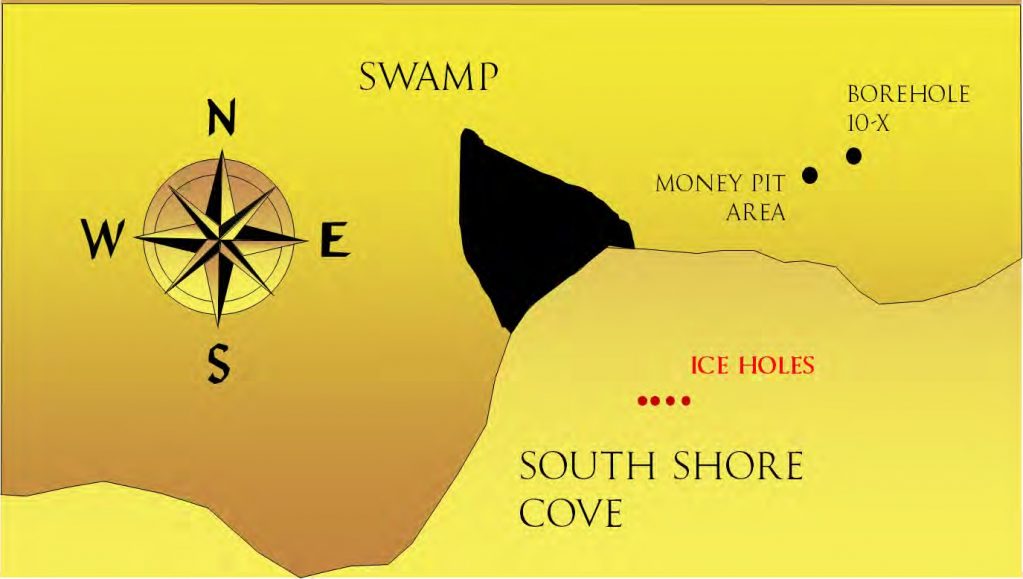 Later, the treasure hunters gather at the Money Pit area, where Irving Equipment Ltd.’s caisson-maneuvering operating has brought 24 feet of material into the H8 shaft. The team watches as the contractors remove the material with a hammergrab.

Meanwhile, Jack Begley, Charles Barkhouse, and Dan Henskee sift through the debris extracted from H8. Begley discovers a large piece of blackened paper or parchment. Dan Henskee then picks out a blackened fragment of what he suggests might be human bone.

In this episode, Jack Begley discovers a scrap of parchment in the spoils of H8 bearing markings done with red and yellow paint or ink. Doug Crowell later suggests that the colours might be evidence of a stylized initial, or drop cap, of the type used in illuminated manuscripts of the Middle Ages.

In this episode, writer Randall Sullivan remarks that he is partial to the theory that Francis Bacon is behind the Oak Island mystery, citing a passage from his natural history book Sylva Sylvarum as evidence. The passage in question is from a chapter in which Bacon describes a supposed method of straining saltwater to produce freshwater. The passage reads:

“Dig a pit upon the seashore, somewhat above the highwater mark, and sink it as deep as the lowwater mark; and as the tide cometh in, it will fill with water, fresh and potable. This is commonly practice upon the coast of Barbary, where other fresh water is wanting. And Caesar knew this well when he was besieged in Alexandria: for by digging of pits in the seashore, he did frustrate the 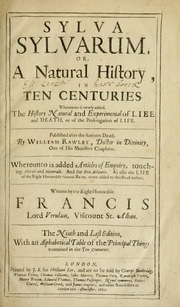 laborious works of the enemies, which had turned the seawater upon the wells of Alexandria; and so saved his army, being then in desperation. But Caesar mistook the cause, for he thought that all seasands had natural springs of fresh water. But it is plain that it is the seawater; because the pit filleth according to the measure of the tide; and the seawater passing or straining through the sands leaveth the saltness.”

Incidentally, Sylva Sylvarum also contains a chapter which Bacon describes how objects can be preserved by being dipped in mercury. A number of Oak Island theorists who subscribe to the notion that Francis Bacon is behind the Money Pit mystery cite this passage as evidence for their theory, as mercury was found in the pottery dump at Joudrey’s Cove, and, according to some, on the scrap of parchment found in the Money Pit in 1897 by the Oak Island Treasure Company.

In this episode, Randall Sullivan expresses his belief in the South Shore Cove flood tunnel- a supposed original working, the existence of which Oak Island treasure hunters have debated for over a century.

In 1897, after using five charges of dynamite to destroy a section of the Smith’s Cove flood tunnel, the Oak Island treasure Company believed they had eliminated the greatest obstacle keeping them from fully excavating the Money Pit. However, after attempting to drain the Pit, the company men learned that the volumetric flow rate of the incoming floodwater was virtually unchanged.

In order to verify that they had indeed blocked the Smith’s Cove flood tunnel with their dynamiting, Frederick Blair and the Oak Island Treasure Company poured red dye into the Pit before pumping it full of seawater. The seawater backwashed the flood system, and soon red dye appeared on the shore of Smith’s Cove. 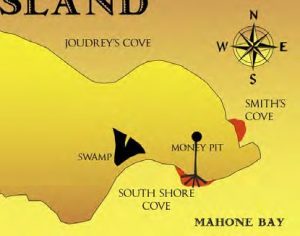