The Battle of Elkwater Lake

Elkwater Lake is a small lake on the Albertan edge of the Cypress Hills. It is located along the Alberta Highway 41, the Buffalo Trail, roughly 50 km southeast of Medicine Hat. Perhaps best known as a main attraction of the tourist town of Elkwater, located on its southern shore, Elkwater Lake is a popular haunt of outdoor enthusiasts year round. In the winter, the lake’s frozen surface is pocked with ice fishing holes, and its shore is crisscrossed with cross-country ski and snowshoe tracks. In the summer, the lake is plied by the watercrafts of recreational boaters and fishermen, and its beaches are packed with tourists. 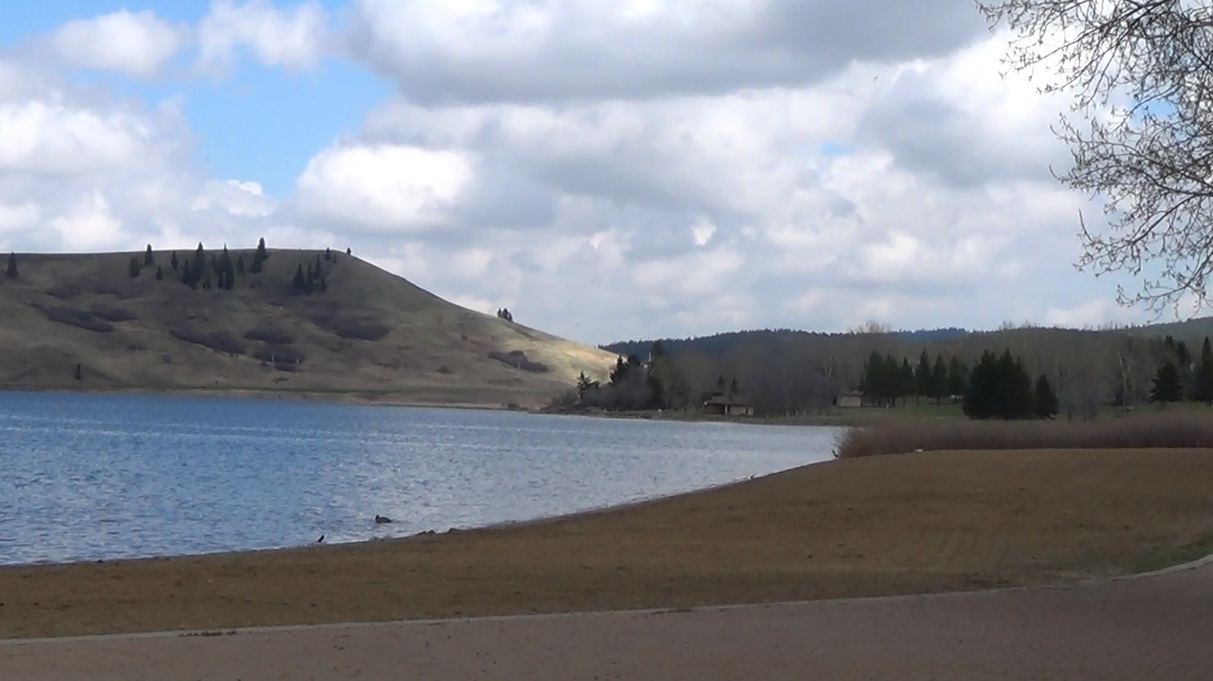 It might surprise some of these outdoor adventurers who enjoy Elkwater Lake to learn that, on a summer day more than 150 years past, the hum of motorboats and the screams of happy kids were replaced by the cracks of gunfire and the war songs of Indian braves. It might surprise some to learn that, in the summer of 1864, the shores of Elkwater Lake bore witness to the last great battle between the Blackfoot and Kootenay nations.

In the summer of 1864, a large band of Kootenay Indians crossed the Rocky Mountains to the western Canadian plains, domain of the warlike Blackfoot Confederacy, for the annual buffalo hunt. Traditionally, the Kootenay and Blackfoot nations were neither allies nor bitter enemies. Typically, before embarking on this summer venture, the Kootenay would seek out the head chiefs of the Blackfoot people on whose lands they encroached. They would offer the Blackfoot gifts and smoke tobacco with them in exchange for a peace pact and permission to hunt on their lands.

This particular summer, however, the Blackfoot were nowhere to be seen. Kootenay scouts who ranged ahead returned with word that the Blackfoot were far to the east, beyond the Cypress Hills. There, they were waging war with their Cree, Assiniboine and Gros Ventre enemies, and had performed their sacred Sun Dance ceremony in the valley of Maple Creek. With that Blackfoot so far to the east, the Kootenay neglected to make a peace pact with them, and decided to hunt anyways as was their custom.

The Kootenay quickly learned that few buffalo were to be found in the foothills that summer. They ventured further east across the prairies, finally finding a sizeable herd of buffalo at the edge of the Cypress Hills. The ensuing hunt was a success, and the mountain Indians set about butchering the carcasses of the bison they had killed.

Unbeknownst to the Kootenai, the massive party of South Peigan that had spent the summer on the eastern prairies was on its way home, and was camped only a short distance away on the shores of Elkwater Lake. The Blackfoot had suffered a number of defeats in the past two summers, and had gained a handful of hard-won victories. Many of the South Peigan warriors were itching for a fight.

During the buffalo hunt, a Kootenai hunter named Abel chased a fat buffalo cow a good distance from the main herd. The cow took a circuitous route through the coulees, hoping to escape its pursuer, but the determined hunter stayed with it. Finally, Abel brought the animal down. He dressed the carcass and packed some of the meat onto his horse. When he was convinced he had loaded he horse with all it could comfortably carry, he set off in a straight path back to the Kootenai camp.

As he crested a hill, he saw before him a large number of hunters who were dressing their own kills. Assuming they were Kootenay, he rode through their midst without a second thought. However, as he glanced around him, Abel noticed that the hunters rode strange horses and butchered their meat in a peculiar fashion. The Kootenay realized with a start that he has stumbled into a party of Blackfoot. His heart racing, he tried to ride through the group without attracting any attention.

Abel reached the Kootenai camp and warned his companions of the Blackfoot presence. The Kootenai warriors prepared themselves for battle, as the Blackfoot were almost certainly doing back at their own camp. Soon, the Kootenai braves were armed and mounted. The mountain warriors set off in search of their foes.

The two war parties came within sight of each other on the prairie fronting Elkwater Lake. They drew up a good distance apart and waited for the other to make the first move. 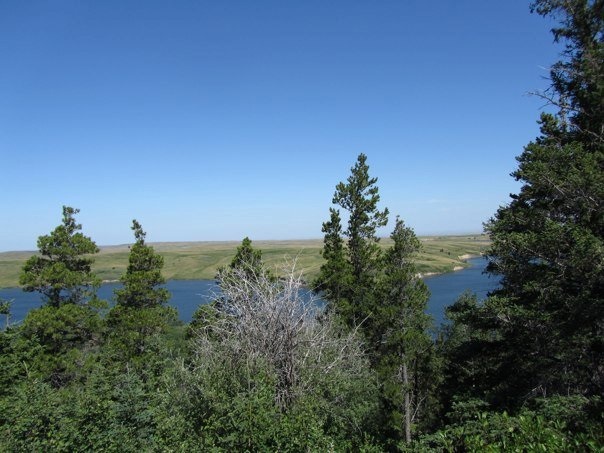 A Kootenay warrior named Dodger would be the first to fire a shot. The Indian rode to the top of a hill, took aim, and fired into the Blackfoot masses. As he reloaded his musket, a Blackfoot warrior named Many Swans rode up the hill to challenge him. The South Peigan brave shot the Kootenai and returned to the Blackfoot lines.

After this, the two forces converged. In no time, the dry prairie air was filled with gunshots and war whoops. The Kootenay war chief Isadore – who would years later confront Mountie Sam Steele upon the latter’s expedition to Galbraith’s Ferry – bolstered his warriors’ morale by reminding them that the formidable Blackfoot, who had gained legendary status in the Rocky Mountains, were mere flesh-and-blood men, like them.

Both sides fired at the other, shooting rifles and muskets and loosing arrows. A nineteen-year-old Blackfoot warrior named Kunsa, who was Kootenay-Flathead by blood, rushed the Kootenay lines. He was shooed back by Chief Isadore, who admonished the young man for his foolishness.

At the same time, an unarmed Kootenai medicine man named Raven rode into the Blackfoot ranks, singing a war song and shaking a rattle. The South Peigans shot at the man, but none were able to hit him. Unscathed, the medicine man wheeled his horse around and returned to the Kootenai lines.

After fighting for some time, Isadore instructed his warriors to retreat. He fearlessly rode between his men and the Blackfoot in an effort to give his warriors time to get away. In the process, he rescued a young Kootenay warrior named Eneas Tallow from almost certain death.

The Kootenai force, which was greatly outnumbered, regrouped on the prairies. They dismounted and steadied their weapons for better accuracy. One Kootenay warrior named Cut Nose, whose face had been badly disfigured long ago during a fight with a grizzly bear, dismounted at the edge of the party, near the lake. He fired his musket and bent down to reload. While he was doing this, two Blackfoot warriors charged in his direction. The faster one was a young brave, while the slower warrior was a seasoned Blackfoot war chief named Red Old Man. Cut Nose, upon hearing the warriors’ approach, looked up from his gun. His scarred face so badly startled the young brave that the man dropped his knife. Red Old Man descended on the Kootenay before he could take advantage of the situation. He chased the man through the nearby bushes and into Elkwater Lake. Cut Nose waded through the water, but Red Old Man followed and killed him.

During this fight, a young Kootenay brave named Wolf Head was scalped and left for dead by a South Peigan. The wounded Indian crawled to the cover of nearby bushes, where he hid for several days. Later, he emerged from his hiding place and made his way on foot back to his home in the Tobacco Plains. From then on, he was largely avoided by the superstitious Blackfoot, who saw him as a ghost incarnate.

At sunset, the war chiefs of the two parties called an end to the fight. Both forces collected their dead and wounded and retreated to their camps.

The Kootenay, who were greatly outnumbered by the Blackfoot, were in no mood for a second battle. After tending to the wounded, they broke camp and headed west. They travelled throughout the night.

The Blackfoot, on the other hand, were eager re-engage the Kootenay. The following morning, the Blackfoot warriors rode to the Kootenay camp to find it deserted. As the Kootenay were not blood enemies like the Crow, Cree, Snake, or Gros Ventres, the Blackfoot decided not to pursue them. They allowed the westerners to return to their mountain homes unmolested.

The following summer, when the Kootenay crossed the Rocky Mountains for the annual buffalo hunt, they found the Blackfoot camped along the rivers of the foothills. The two nations exchanged gifts, smoked tobacco together, and made peace. According to Ambrose Gravelle, a Kootenay historian, “[The Battle of Elkwater Lake] was our last big battle with the Plains Indians.”