Back to The Adventures of Paul Kane: Part 4.

The Adventures of Paul Kane: Part 5

Shortly after returning to Upper Fort Garry, Kane learned that a sloop which regularly ferried passengers and supplies from Lower Fort Garry to Norway House at the northern end of Lake Winnipeg would depart shortly. The artist rode down the banks of the Red River to the Stone Fort and boarded the vessel. The sloop embarked shortly thereafter and, after stopping for the night downriver at the farmstead of an Episcopalian missionary named Mr. Smithers, continued downriver. On the way to Lake Winnipeg, Kane and his travelling companions were obliged to take refuge from a thunderstorm in an Indian teepee. The native women and children who occupied the teepee “cleared a corner for us to sleep in,” Kane wrote, “but one of the most awful thunder storms, accompanied by heavy rain, that I had ever witnessed, set in, and effectually prevented our repose. Such tempests are here of frequent occurrence; so vivid was the lightning, and so near the rattling and crashing of the thunder, that I fancied several times during the night that I heard our vessels dashed to pieces by it.” The Indians informed Kane that, in a similar storm which ravaged the region not long before, an Indian teepee was struck by lightning, killing four of its occupants and injuring three more.

The travellers continued downriver to Lake Winnipeg and sailed up that body of water to northerly Playgreen Lake, subsisting on jackfish, or northern pike, during the course of their journey. From there, they sailed to Norway House, where, in addition to the traders, who treated them hospitably, they encountered a band of Swampy Cree.

Kane remained at Norway House until August 14th, finally joining a Columbia Express: a flotilla of York boats arrived from York Factory, the HBC Headquarters on Hudson Bay, which was bound for the Pacific Coast. This particular brigade carried otter pelts intended for the Russians as payment for the HBC’s use of their territory in the Pacific Northwest. Henry and his companions sailed west across Lake Winnipeg to the mouth of the Saskatchewan River. They portaged around the Grand Rapids, headed up Cedar Lake, and continued again up the Saskatchewan River. They passed the mouth of the South Saskatchewan River, which Kane called the Cumberland River, and proceeded up the North Saskatchewan to Fort Carlton, arriving there on September 6th. There, Kane met Robert Rundell, a Cornish Methodist missionary after whom various landmarks in Calgary, Edmonton, and Banff, Alberta, are named today.

Paul Kane, Robert Rundell, and Mr. Rowand, the chief factor of York Factory, with the assistance of a Cree hunter, decided to proceed ahead of the York boats on horseback and wait for the brigade at Fort Edmonton. During their departure, Rundell tucked a pet cat he had brought with him in the breast of his coat, tying a string around the cat’s neck and securing the other end to the pommel of his saddle so that it could not escape. As soon as the horse broke into a trot, the feline passenger leapt from Rundell’s lapel, to the astonishment and horror of the Indians, to whom it appeared as though the cat had materialized from thin air. The cat swung from the string to which it was attached. This pendulum-like motion brought the cat in contact with the horse’s leg, which it immediately clawed. The horse, in response, bucked wildly, sending Rundell flying.

“All present were convulsed with laughter,” Kane wrote, “to which the Indians added screeching and yelling as an accompaniment, rendering the whole scene indescribably ludicrous. Puss’ life was saved by the string breaking; but we left her behind for the men to bring in the boats, evidently to the regret of her master, notwithstanding the hearty laugh which we had had at his expense.” 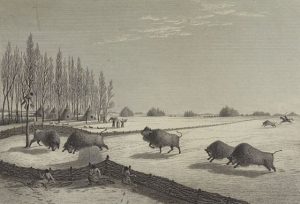 Shortly after their departure, Kane witnessed a Cree buffalo hunt, which entailed the hunters driving their prey into a buffalo pound, or corral, and slaughtering with bows and arrows therein. After describing this method of hunting, Kane wrote:

“The Indians in this manner destroy innumerable buffaloes, apparently for the mere pleasure of the thing. I myself have seen a pound so filled up with their dead carcases that I could scarcely imagine how the enclosure could have contained them while living. It is not usual to drive in so many that their aggregrate bulk forces down the barriers. There are thousands of them annually killed in this manner; but not one in twenty is used in any way by the Indians, so that thousands are left to rot where they fall. I heard of a pound, too far out of my direct road to visit, formed entirely of the bones of dead buffaloes that had been killed in a former pound on the same spot, piled up in a circle similarly to the logs above described. This improvidence, in not saving the meat, often exposes them to great hardships during the seasons of the year in which the buffalo migrates to the south.”

Kane and his companions rode up the banks of the North Saskatchewan to Fort Pitt, encountering buffalo, prairie wolves, deer, antelope, a prairie fire, and a large band of Cree Indians on the way. From there, they continued on to Fort Edmonton, riding through an enormous herd of buffalo which covered the prairie as far as the eye could see, surviving a battle with a prairie grizzly, and coming across an Indian burial ground whose inmates, their Cree guide informed them, consisted of an entire band which had been wiped out by smallpox.

Paul Kane and his companions reached Fort Edmonton on September 26th, Kane nearly drowning while fording the North Saskatchewan on horseback a short distance from his destination. The day after their arrival, the prairie they had just crossed went up in flames .

Kane spent the next few days sketching the fort and some of the Cree and Assiniboine natives who camped in its vicinity. One of these characters- a short, battle-scarred Assiniboine chief named Potika-poo-ts, or “Little Round Man”- told Kane that he had killed his own mother at her own request, when she professed to be took old and feeble to keep up with her family, by shooting her in the heart with his musket.

Continued in The Adventures of Paul Kane: Part 6.