The following is an excerpt from The Riders of the Plains: A Reminiscence of the Early and Exciting Days in the North West (1905), by Cecil Edward Denny. Despite its name, this chapter actually has nothing to do with the Cypress Hills Massacre, which was described in the previous chapter. This work is in the public domain.

Continued from Chapter II – Ruin of the Red Man.

IN 1869, THE HUDSON Bay Company transferred their right in Prince Rupert’s Land to the Canadian government. At that time the province of Manitoba was principally inhabited by half breeds, nearly all Cree or Sauteaux. There were two parties of these, the Roman Catholic party and the Scotch and English element, who traded with the Hudson’s Bay Company. The former were dissatisfied and formed a provincial government of their own under the leadership of Louis Riel. It is a matter of history how the Red River rebellion began, and how it ended, and no doubt some blame must be attached to the Hudson’s Bay Company. In 1870 the expedition to Red River took place, and on the withdrawal of the troops, a militia corps was left in the town of Winnipeg, to look after ostensibly the half breed population, who were at this time far from settled. 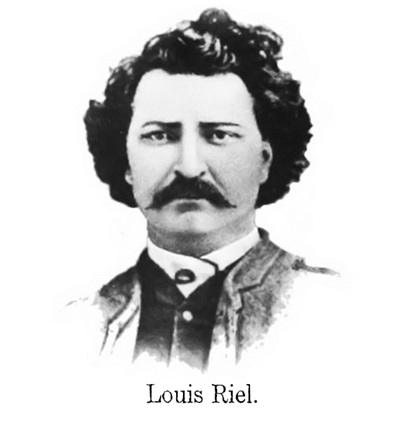 These halfbreeds were in the habit during each summer of starting with long trains of Red River carts and their families for the plains to hunt the buffalo and make pemmican, which consisted of dried buffalo meat and fat, pounded together, and packed with hot grease in thin bags. This not only supplied them with food for the winter but was a valuable article of trade to the Hudson’s Bay Company, which yearly shipped thousands of sacks to their northern trading posts on the peace and the Mackenzie rivers.

These half breeds would generally go as far west as the Cypress mountains, and nearly always came into collision with the Indian tribes who congregated around that neighborhood and bloody fights ensued. After a while many of them branched out from Manitoba, and settled permanently in the North West Territories, mixing among the Indians, instilling evil in their minds. They confined themselves nearly altogether to the northern portion of the Territories, along the North Saskatchewan river, and as they were among the Crees, whose friends and relations they were, they made a strong element in the warfare carried on by the northern or wood Indians, against their brethren of the plains. 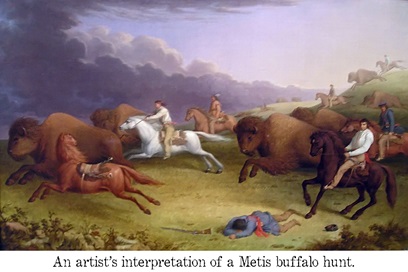 These men, as I have before stated were dissatisfied and unsettled, and a slight cause only was wanting to bring about an almost similar state of things to that existing at the same time of the expedition in 1870. In all probability it would not have confined itself alone to Manitoba, but would have extended into the North West Territories, as the half breeds no doubt depended on their friends among the northern Indians to join them. This, then, was another cause which demanded that some permanent force should be organized, and dispatched to Manitoba and he North West Territories. Before closing the chapter in reference to the share that the halfbreeds had in forcing the organization of the N.W.M.P., it would not be out of place to say something about their people, who at present are a large part of the community of the North West Territories, and are not by any means a peaceable or settled race.

There is probably no other part of the world outside of the North West Territories that can show a people with such a peculiar origin and with the same characteristics as the half breeds of these Territories. They led a nomadic life, bit withal were so bound together, and had such common interests and love for the country in which they were born. Although for many years large numbers of them went south along the Missouri river, to follow the buffalo, they all came back to the northern part of the Territories and along the North Saskatchewan river. From this country many of them originally came and they mingled again with their old friends and relations- the Crees. They sought their old camping places, around or in the vicinity of some of the old Hudson’s Bay Company posts, such as Carleton fort and Fort Edmonton.

Long previous to the time that the Hudson’s Bay Company and the American North West Fur Company consolidated, the Hudson’s Bay Company were in the habit of bringing out men to work at their different forts in Prince Rupert’s land. They came from Scotland, the Orkney and Shetland islands and in some instances from England end Ireland. It was found that the men from the north of Scotland and the Orkney and Shetland islands could be engaged at lower wages and for a longer time, and were also more tractable than any other men they could get. In reality they were more easily deceived than the same class of Irish or English. 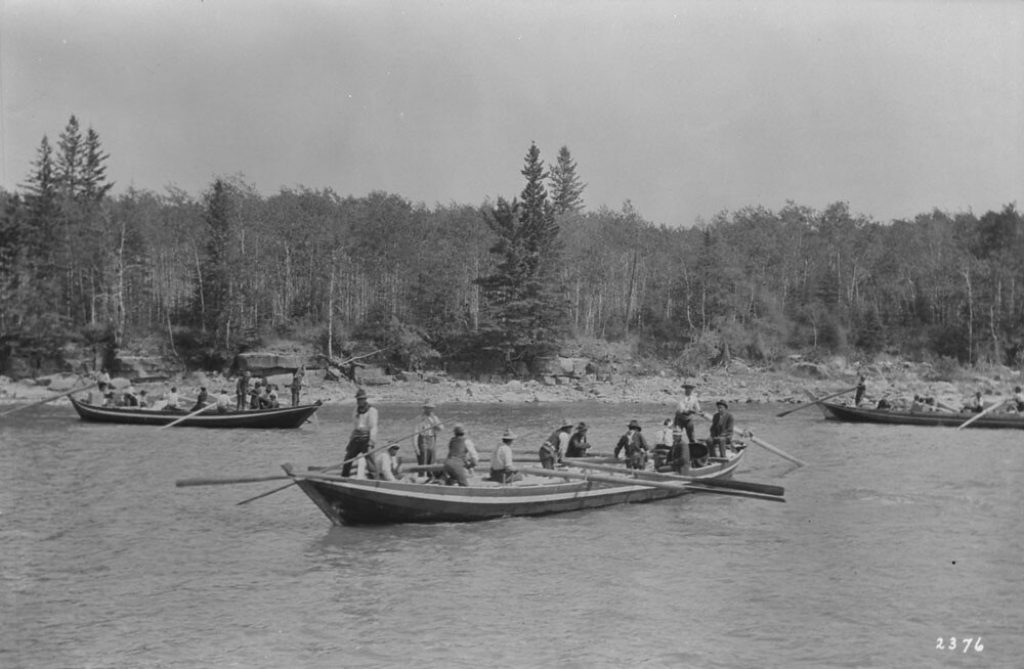 These men would be engaged by the Hudson’s Bay Company’s agents in Edinburgh or other parts of Scotland, and by promises of grants of land in Prince Rupert’s land or Manitoba, after a certain number of years’ service in the company, would sign agreements binding them to this company for a term of years, generally not less than 10. They were to get their food and a very small salary, a few pounds per annum, generally from £16 to £20. These men were then sent out in the Hudson’s Bay Company’s sailing vessels to York factory, a point of supply, situated on Hudson’s bay. The voyage would last sometimes for three months and these unfortunate men would have most of the romance knocked out of them before they reached York factory. From this point they were sent either over land or up the many rivers emptying into Hudson’s bay, hauling by hand the heavily lo9aded boats belonging to the company for hundreds of miles into the interior. Their destination was generally some of the company’s forts along the North Saskatchewan, from which forts they were often sent to the far northern posts along the Mackenzie or Peace rivers.

These men after they got out here, found that they had been badly fooled. As there was no possible way for them to get back home, they had to make the best of the bargain. Although they had all the food that they could eat, of its kind, which was principally dried meat and pemmican, they were, to all intents and purposes, the slaves of the Hudson’s Bay Company. The factors did not hesitate to put a deserter in irons and try him summarily before the officers, who held almost despotic sway over the whole of Prince Rupert’s land. 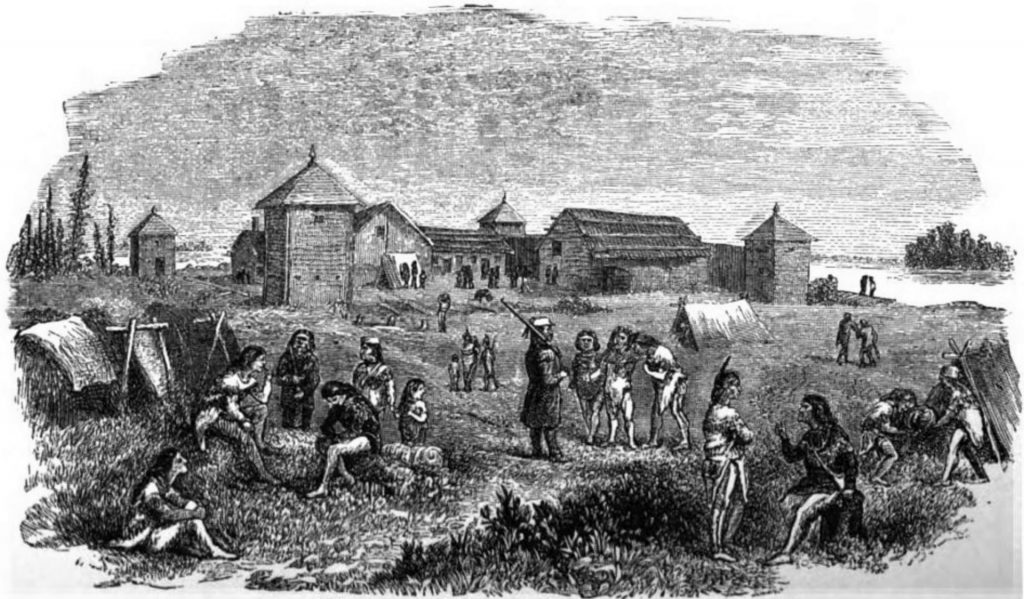 These men were nearly all unmarried, and it was the aim of the Hudson’s Bay Company to keep them in the country and in their employ, and they encouraged them to contract marriages with the Indians among whom they dwelt. In fact many of the officers of the company contracted these marriage. That consisted in either buying or taken an Indian woman. Even today it will be found that many of the chief officers or traders of the Hudson’s Bay Company, either are halfbreeds or have more or less Indian blood in their veins.

By the contraction of these marriages the result of course was that around the different Hudson’s Bay company’s posts, nearly all of their employees had families more or less numerous. As the boys or girls grew up and intermarried among themselves, the foundation was laid of the present half breed population. 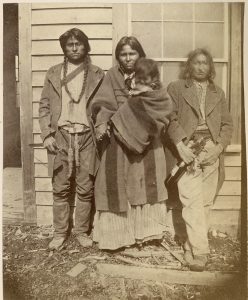 These half breeds were even more the slaves of the company than their forefathers. Those not working for the Hudson’s Bay, or who had left them, went by the name of freemen. The large majority of half breeds are either Cree or Seauteaux. This is easily accounted for by the fact that it was among those Indians, along the North Saskatchewan river that the company had their forts and did their trading. They never to any great extent, extended their trading posts among the plain Indians to the south. These Indians did the principal part of their trade with the American North West Fur Company along the Missouri river. It is therefore seldom that a Blackfoot or Piegan half breed is seen. When found, they generally come from the south.

The half breeds at the present time are numerous, well armed, active and of good physique, never having lead any other life than that of hunting and trapping. They are well supplied with horses and might make formidable foes, but for the established fact that there is little or no backbone or stamina in a mongrel of any race.

The Hudson’s Bay Company after surrendering their right to “Prince Rupert’s land,” were anxious to see some government force in the country south of the Saskatchewan to suppress the trade in liquor carried on by the American traders from Montana. Of course this was to their interest, as they had abandoned the liquor trade and if it was carried on in the country where they were trading, would to a very great extent cripple their fur trade and be a great loss of profit to themselves. They well knew that they could hold their own against any other traders from any place except those in the whisky traffic. They therefore added their voice to that of others asking the Canadian government to take some steps to put a stop to the illicit liquor traffic going on south of the Saskatchewan.

I have therefore shown some of the principal causes that first led to the organization of the North West Mounted Police, and briefly drawn a picture of the state of the North West Territories previous to their advent. It must be remembered that all that vast country west of Manitoba to the Rocky mountains and north of the American boundary line, was teeming with millions of buffalo, overrun with elk, deer, and antelope, and all the rivers were full of beaver and other fur bearing animals. From this source an almost fabulous amount of wealth in the way of furs had been derived by the Hudson’s Bay Company for over a century. Stories were in circulation regarding its wealth in minerals. This country was in the hands of a few lawless American traders. Their trade was doing incalculable injury to the tribes of untutored Indians on British soil. Therefore the time was fully ripe for the Canadian government to take some steps to ascertain what they really owned in Rupert’s land, and to occupy that vast territory and place it on some basis of civilization. All causes had tended to the same end, which was the eventual organization of the North West Mounted Police.

Continued in Organization of the Force.