The Tale of Sasquatch Mountain

Two weeks ago, we explored the story behind the origin of the word ‘Sasquatch’. Today, we’re going to take a look at the incredible tale behind the naming of the Sasquatch Mountain Resort- a ski hill nestled in the Douglas Mountains north of Chilliwack, British Columbia.

For decades, the ski hill on the slopes of Mount Keenan, situated an hour’s drive from both Chilliwack and Mission, B.C., was known as the Hemlock Resort, ostensibly owing its name to a particular evergreen tree common to the rainforests of the Pacific Northwest. Last year, the Resort announced an ambitious expansion plan which it inaugurated with a rebranding campaign. In addition to adopting a new logo, Hemlock changed its name to the Sasquatch Mountain Resort.

In a press release, the Resort claimed that its new name was an homage to the Chehalis First Nation, on whose traditional territory the ski hill is located:

“The Sasquatch, which is an anglicized pronunciation of [Sasq’ets], is the primary caretaker of the land and an integral aspect of [Chehalis] identity and spiritual beliefs. Historical experiences with [Sasq’ets] have been orally documented and passed down from generation to generation. The Sasquatch ensures that the land remains plentiful and well taken care of.”

Although the Sasquatch Mountain Resort has not indicated an awareness of this in its press releases or on its website, its new name is doubly appropriate for a far more specific reason. Not only is the Sasquatch Mountain Resort located within the traditional territory of the Chehalis First Nation, a tribe closely associated with the legend of the Sasquatch; it is also located on the slopes of Mount Keenan, a landmark formerly known as Mount Morris, home to the most chilling Sasquatch story ever recorded.

The Legend of Mount Morris

Throughout the first half of the 20th Century, magazine and newspaper articles documented a strange legend espoused by members of the Chehalis First Nation. Chehalis elders whispered that, once every four years, the Sasquatch- the hairy wild giants of the coastal rainforests- congregated at the peak of Mount Morris, a mountain located just north of the Chehalis Reserve. Natives often encountered travelling Sasquatch in the woods immediately prior to this quadrennial pilgrimage, and some even observed signal fires flickering atop Mount Morris in the dead of the night- perhaps evidence of some mysterious powwow.

Throughout the 1930’s, a Scottish immigrant named J.W. Burns, who served as both the school teacher and the Indian Agent at the Chehalis Reserve, wrote a number of articles on the Sasquatch legend, some of them set on or near Mount Morris. In the first of these articles, published in the April 1, 1929 issue of Maclean’s magazine, he documented a story told to him by an elderly Chehalis hunter named Charley Victor. Victor claimed that he had encountered a Sasquatch woman in his youth, and that the creature had spoken to him in St’at’imcets, the language of the Douglas First Nation (a more northerly Lillooet tribe).

Burns published another tale of talking Sasquatch- the second of its kind ever recorded- in the January 1940 issue of The Wide World: A Magazine For Men. This story was told to him by an 87-year-old Chehalis woman named Serephine Long, who had lived in the area all her life. Her harrowing tale remains one of the most disturbing Sasquatch stories ever told.

The Tale of Serephine Long

In 1872, 17-year-old Serephine Long stumbled from the woods into the Chehalis village near the foot of Mount Morris. The villagers were astonished, as Serephine had been missing for nearly a year and had long been given up for dead. The girl was in a state of supreme exhaustion and was too weak to talk, and so her inquisitive countrymen withheld their many questions and put her to bed. Later that night, Serephine gave birth to a monstrous-looking child which only survived for a few hours.

When she was able, Serephine Long related her incredible experience to her family and friends. Nearly seventy years later, she told the same story to J.W. Burns at the Chehalis Reserve.

On the day of her disappearance back in 1871, Serephine Long had been foraging for cedar roots at the base of Mount Morris, daydreaming about the brave she was engaged to marry. On her way back to camp, a hairy hand shot out of the bush and clamped over her mouth. Serephine was hoisted into the air and thrown over the shoulder of a hairy giant.

“I was terrified,” the lady told Burns, “fought, and struggled with all my might. In those days, I was strong. But it was no good, the wildman was as powerful as a young bear. Holding me easily under one arm, with his other hand he smeared tree gum over my eyes, sticking them shut so that I could not see where he was taking me. He then lifted me to his shoulder and started to run.”

The Sasquatch took Serephine all the way up what could only be Mount Morris. “Although I was frightened,” Serephine told Burns, “I could not but admire his easy breathing, his great strength and speed on foot.”

The Sasquatch brought Serephine into a large cave near the top of the mountain and removed the tree gum from her eyes. “I sat up,” Serephine said, “and saw that I was in a great big cave. The floor was covered with animal skins, soft to touch and better preserved than we preserve them. A small fire in the middle of the floor gave all the light there was. As my eyes became accustomed to the gloom, I saw that beside the young giant who had brought me to the cave, there were two other wild people- a man and a woman. To me, a young girl, they seemed very, very old, but they were active and friendly and later I learned that they were the parents of the young Sasquatch who had stolen me.”

For nearly a year, the Sasquatches kept Serephine Long as their prisoner, never allowing her an opportunity to escape. The Sasquatches spoke to each other in a language similar to St’at’imcets, the tongue of the Douglas Indians, and in time Serephine learned enough of their speech to communicate with them. 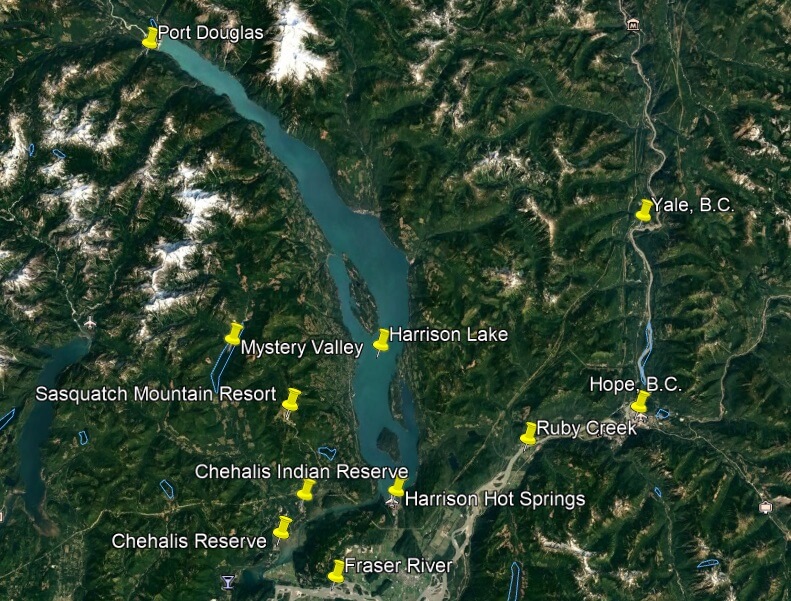 “They fed me well on roots, fish, and meat…” she told Burn. “I asked the young giant how he caught and killed the deer, mountain goats and sheep that he often brought into the cave. He smiled, opening and closing his big hairy hands. I guessed that he just laid in wait and when an animal got close enough, he leaped, caught it and choked it to death. He was certainly big enough, quick enough and strong enough to do so.”

About a year into her imprisonment, Serephine Long became very ill. She begged her young Sasquatch captor to return her to her own people so that she could recover. “At first he got very angry,” she said, “as did his father and mother, but I kept on pleading with them, telling them that I wished to see my own people before I died. I really was ill, and I suppose they could see that for themselves, because one day after I cried for a long time, the young Sasquatch went outside and returned with a leaf full of tree gum. With this he stuck down my eyelids as he had done before. Then he again lifted me to his big shoulder.”

The return journey was a hazy nightmare for Serephine Long, who was too weak to even cling to the Sasquatch as he carried her down the mountain. At last, he laid her down in the forest not too far from her home and gently removed the sap from her eyelids. “When he saw that I could see again,” Serephine said, “he shook his head sadly, pointed to my house and then turned back into the forest.”

The villagers were wildly excited at Serephine’s return. Too weak to reciprocate their enthusiasm, she crawled into bed. That night, she gave birth to a child, which only survived for a few hours.

“I hope that I never again shall see a Sasquatch,” she concluded.