Back to The Adventures of Paul Kane: Part 6.

The Adventures of Paul Kane: Part 7

Kane and his companions spent a day in the Nisqually Indian village before departing on April 8th, paddling up Puget Sound and across the Salish Sea to Fort Victoria on Vancouver Island. There, the fort’s factor, Mr. Finlayson, furnished Kane with a comfortable room.

Paul Kane spent the next two months on Vancouver Island, sketching the natives he encountered on various “sketching excursions”. During the course of his wanderings, he witnessed various Coast Salish mask dances and gambling games.

In early May, four Coast Salish Indians accompanied Kane on a journey to the west side of Vancouver Island. They paddled south down the coast for the Strait of Juan de Fuca. On the way, the travellers were accosted by a band of Indians whose chief, in an almost hostile manner, demanded that Kane draw his portrait. Kane and his companions were obliged to spend the night encamped near the village on account of a storm. That evening, Kane witnessed a shamanic healing ceremony, which he described thus:

“About 10 o’clock at night I strolled into the village, and on hearing a great noise in one of the lodges I entered it, and found an old woman supporting one of the handsomest Indian girls I had ever seen. She was in a state of nudity. Cross-legged and naked, in the middle of the room sat the medicine man, with a wooden dish of water before him; twelve or fifteen other men were sitting round the lodge. The object in view was to cure the girl of a disease affecting her side. As soon as my presence was noticed a space was cleared for me to sit down. The officiating medicine man appeared in a state of profuse perspiration from the exertions he had used, and soon took his seat among the rest as if quite exhausted; a younger medicine man then took his place in front of the bowl, and close beside the patient. Throwing off his blanket he commenced singing and gesticulating in the most violent manner, whilst the others kept time by beating with little sticks on hollow wooden drums, singing continually. After exercising himself in this manner for about half an hour, until the perspiration ran down his body, he darted suddenly upon the young woman, catching hold of her side with his teeth and shaking her for a few minutes, while the patient seemed to suffer great agony. He then relinquished his hold, and cried out he had got it, at the same time holding his hands to his mouth; after which he plunged them in the water and pretended to hold down with great difficulty the disease which he had extracted, lest it might spring out and return to its victim. 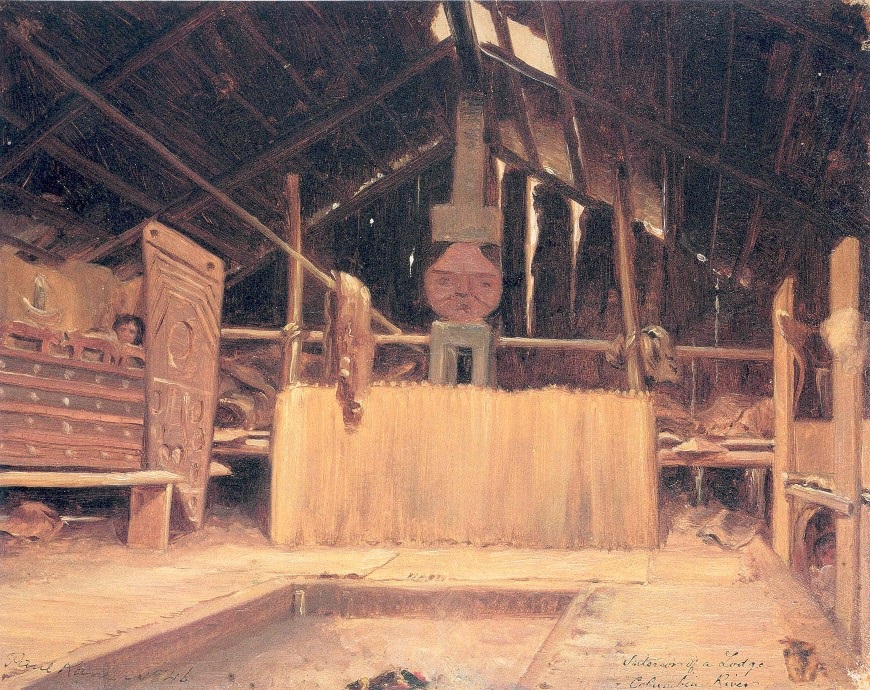 “At length, having obtained the mastery over it, he turned round to me in an exulting manner, and held something up between the finger and thumb of each hand, which had the appearance of a piece of cartilage, whereupon one of the Indians sharpened his knife, and divided it in two, leaving one end in each hand. One of the pieces he threw into the water, and the other into the fire, accompanying the action with a diabolical noise, which none but a medicine man can make. After which he got up perfectly satisfied with himself, although the poor patient seemed to me anything but relieved by the violent treatment she had undergone.”

On May 12th, after spending some time in a Klallum Indian village, Kane and his companions attempted to travel through the Strait of Juan de Fuca, but were blown across the strait to the mainland by strong winds. After staying for several days at an Indian village there, Kane and his guides paddled back across the strait to Victoria. On the way, a ferocious gale descended upon the party. Wrote Kane of the incident:

“The Indians on board now commenced one of their wild chants, which increased to a perfect yell whenever a wave larger than the rest approached; this was accompanied with blowing and spitting against the wind as if they were in angry contention with the evil spirit of the storm. It was altogether a scene of the most wild and intense excitement: the mountainous waves roaming round our little canoe as if to engulph us every moment, the wind howling over our heads, and the yelling Indians, made it actually terrific. I was surprised at the dexterity with which they managed the canoe, all putting out their paddles on the windward side whenever a wave broke, thus breaking its force and guiding the spray over our heads to the other side of the boat.”

The travellers survived the storm and arrived at Fort Victoria no worse for wear. The following day, Kane was visited by a great Makah Indian chief named Yellow-cum (also known as ‘Yellakub’ and ‘Flattery Jack’), of whose martial exploits had heard from his Klallum acquaintances. After Kane drew a portrait of Yellow-cum, the chief told him that his father had been the pilot of the Tonquin, a vessel of the Pacific Fur Company whose entire crew, with the exception of Yellow-cum’s father, was massacred by Nootka warriors at the northern end of Vancouver Island in 1808. It should be noted that the only known survivor of the Tonquin incident was a Quinault Indian man named Joseachal, who had served as the ship’s interpreter. 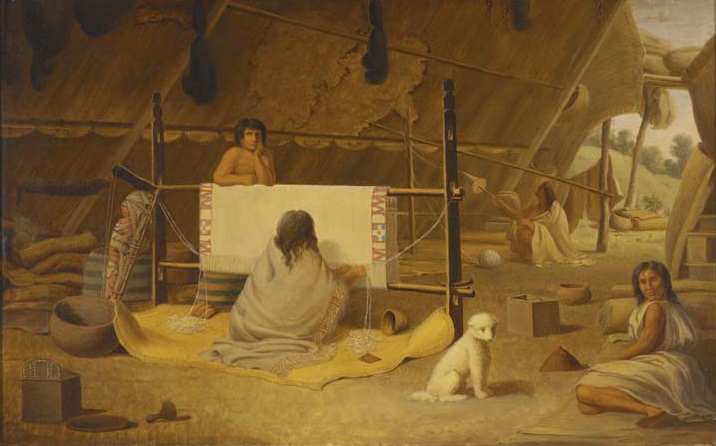 Paul Kane left Fort Victoria in June 9th with an old Nisqually Indian man, along with the man’s wife and two slaves. Among his cargo was a letter from Mr. Finlayson for an HBC agent at Fort Vancouver. The painter’s elderly travelling companion informed him that the letter would ensure their safe passage through regions populated by hostile Indians, as no native would dare hinder the business of the fur trading enterprise on whose goods he relied.

Kane and his companions paddled down the coast of Vancouver Island and across the Salish Sea to Puget Sound, subsisting on goose eggs, seal blubber, bald eagle meat, venison, and small silvery fish called eulachon along the way. During the journey, the old man pointed out a rocky outcrop in the middle of the sea and told the artist a colourful Nisqually legend which purported to explain its origin, along with that of the porpoise and its enmity towards seals. 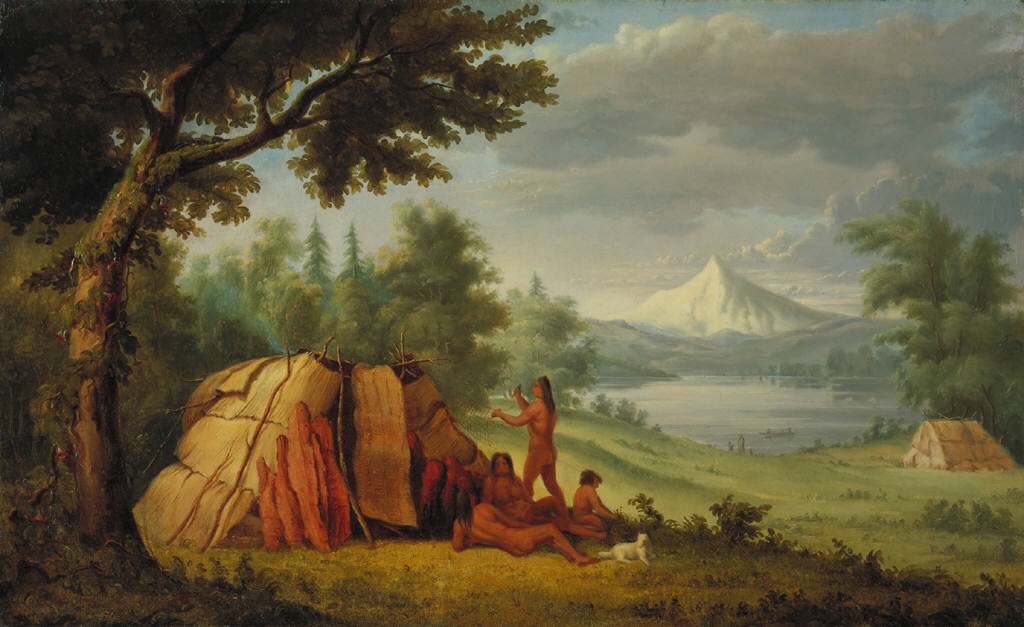 Kane and his companions arrived at the village of Nisqually on June 15th. The artist purchased a handful of horses and headed for the Columbia River. Along the way, he met a family he had encountered on his trip into the country, who now treated him with cold hostility. Shortly thereafter, he learned from a local halfbreed that one of the native women whose portrait he had taken had died, and that he, through his illustration of her, was suspected to have brought about her death.

Kane promptly purchased a canoe and made his way to Fort Vancouver, fortunately avoiding what he believed would be a violent encounter with any relatives of the deceased woman. He arrived at the fort on June 20th.

Continued in The Adventures of Paul Kane: Part 8.