Continued from The Adventures of Paul Kane: Part 12

The Adventures of Paul Kane: Part 13

Following his visit to Fort Pitt, Kane made the journey back to Fort Edmonton without incident. He remained at Edmonton until April 12th, when he left with six men and twenty horses for Rocky Mountain House, where a party of Blackfoot was said to be inbound. On the first day of the journey, the travellers killed a buffalo cow whose calf had been trailing behind her. Hoping to procure fresh veal for supper, Kane tied his scarf around the calf’s neck and tried to drag it along behind his horse. “But it plunged and tried so violently to escape that I was about to kill it,” Kane wrote, “when the Indian took hold of its head, and turning up its muzzle, spat two or three times into it, when, much to my astonishment, the animal became perfectly docile, and followed us quietly to the camp, where it was immediately cooked for supper.”

Kane and company arrived at Rocky Mountain House on April 21st, some of the travellers suffering from snow-blindness. “This fort,” Kane wrote, is beautifully situated on the banks of the Saskatchewan, in a small prairie, backed by the Rocky Mountains in the distance. In the vicinity was a camp of Assiniboine lodges, formed entirely of pine branches. It was built for the purpose of keeping a supply of goods to trade with the Blackfoot Indians, who come there every winter, and is abandoned and left empty every summer. It is built like most of the forts, of wood, but with more than ordinary regard to strength, which is thought necessary on account of the vicious disposition of the Blackfoot tribe, who are, without exception, the most warlike on the northern continent.”

The factor of Rocky Mountain House at that time was a Anglo-Cree Metis named Jemmy Jock, who had lived among the Blackfoot for many years, and had once been a Blackfoot chief. One temporary resident of the post at that time was an Assiniboine chief named Mah-Min, or “Feather”, whose portrait Kane sketched. When the chief saw the sketch and his people’s favourable reaction to it, he gifted Kane a bear claw necklace which he had worn for twenty-three years. “The Assiniboines, who reside in the vicinity of this fort,” Kane wrote, “I found the most kind and honorable of any tribe that I met with.” 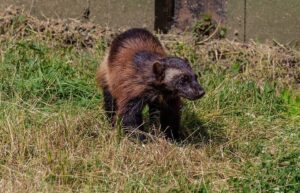 There was nothing to eat at Rocky Mountain House except a few rabbits, and after ten days of malnourishment, during which the Blackfoot failed to arrive, Kane decided to return to Edmonton. Accompanied by Jemmy Jock, he rode east, hoping to avail himself of the contents of a cache which the Metis had built by the river. Instead of the dried buffalo meat they expected to find, the travellers discovered a fat wolverine trapped inside the cache. Apparently, the animal, in a scrawly and starving state, had squeezed through the logs that comprise the cache walls and gorged itself on the provisions therein. By doing so, it became so fat that it could not make its escape through the same hole in the wall through which it entered. Kane and Jock killed the wolverine and made a meagre supper out of the few scraps of meat they managed to salvage from the cache floor.

The travellers rode on through a fierce blizzard, eager to reach their destination before malnutrition sapped their strength. They arrived at Edmonton after a three-day journey, during which they were required to leave their spare horses behind.

On May 22nd, the York Company Express arrived at Rocky Mountain House. After waiting out a three-day storm, they embarked on their York boats, and took on Kane as a passenger. They rowed and sailed down the North Saskatchewan River, making a two-day stop in Fort Pitt.

Continued in The Adventures of Paul Kane: Part 14