One of the most gallant and successful stands ever made by a band of Indian warriors against overwhelming numbers, was made by five Cree braves, a little over twenty years ago, on an island in the Saskatchewan about half a mile below Medicine Hat, and a little above the point where Seven Persons Creek joins the river. 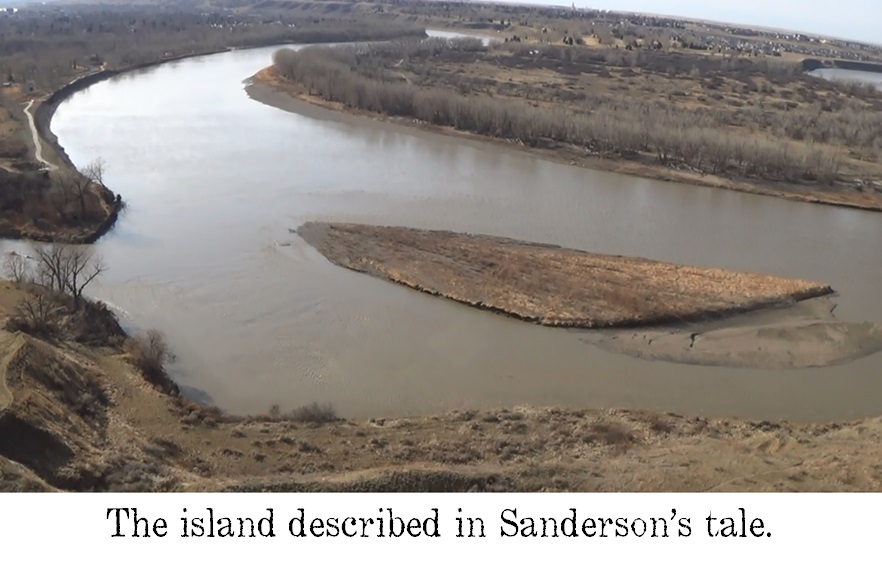 Two of the band were Crees and the other three were Oos-kus-chee-moos-suks, or Young Dogs, as they were called, a cross between Crees and Assiniboines. The leader was a Cree named See-uka-nis, or Little Rump, who is still alive, having been only a young man at the time I speak of. He was in Medicine Hat last summer revisiting the scene of the great exploit performed by him and his companions.

They had come from the Cypress Hills to the plains of Medicine Hat for the express purpose of running off as many as possible of the horses belonging to a numerous band of combined Bloods and Blackfoot, who were encamped on that favorite spot. But they found, on their arrival, that the time was too near daybreak to suit their purpose, and they resolved to wait until the next night so that they might be favored by the darkness in their attempt. In order to escape detection by their enemies they went to the island already mentioned, and scooped out for themselves a hole in the sandhill. It could hardly be dignified by the name of a cave. Piling some brush over the entrance, they prepared to await in concealment the fall of night. 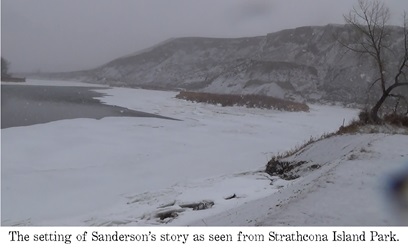 They had not been long stowed in their cache when a young Blood, who had driven the horses from the camp over to the island to pasture, and who was accompanied by a dog, came past the place. The dog discovered the presence of the hidden men and gave unmistakable indications of the fact, but his master pretended not to notice that anything was wrong, and gave no sign of suspicion. As soon, however, as eh had gone out of sight of the spot, he hurried to the camp at the top of his speed and gave the alarm to his friends, who, to the number of fifty or upwards, rushed to the spot. Before the Crees knew what was coming the warriors had surrounded them and opened fire upon their hiding place. But, if the Blood and Blackfoot warriors had the advantage of numbers, the Crees and their friends had the best of the position. Being well armed and sheltered, they returned the fire of their assailants with deadly effect, standing them off successfully the whole day until night was approaching.

Now there was a noted chief and warrior of the Bloods named, in Cree, Pua-pisk-pachk-ka-hach-kwan, or Iron Shield, who happened to be away from camp that day, buffalo hunting. Towards evening he returned to the camp and learned of the fight that had been going on all day on the island. Said one of his wives to him, in reproach, “Where has Iron Shield been all day, while his young men have been fighting with our enemies? All day long has the battle been going on over on the island, and Iron Shield’s war whoop has not been heard not has his gun spoken.”

Iron Shield heeded not the taunt of the woman, but called to a boy to bring him his war dress and his war horse, and was soon at the scene of strife. He scoffed at his warriors and charged them with cowardice. “Why,” said the angry chief, “have you played at war with those Crees all day? Why do I not find you dancing the scalp dance around their dead bodies, instead of being held up by a handful of sons of dogs of Crees?” 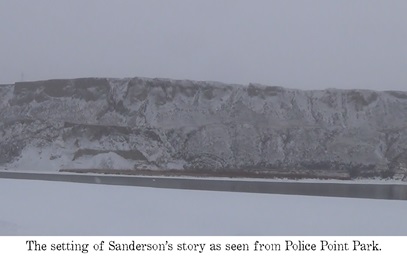 The warriors replied little, except to say that those enemies were men to be dreaded, and to point to the bodies of fourteen Blood and Blackfoot braves who had fallen by their hand. The sight, instead of making the chief more cautious, only seemed to further excite his fiery disposition. He set spurs to his steed and galloped right up to the opening of the gave where he was met by a volley from the garrison. He fell from his horse, pierced through the heart by a bullet from the rifle of Little Rump.

His fall completed the discomfiture of his braves, and not one of them dared venture near the cache while daylight lasted. They held a pow wow of their chief men and determined, in the darkness, to creep up on the Crees, take them by surprise, and make the fight a hand to hand one. This scheme they attempted to carry out, but when they reached the hole whence the bullets had been sped that laid low fifteen of the braves, including Iron Shield, they found it empty. Little Rump and his Young Dog allies had lost no time in stealing through the lines of their enemies, under cover of the darkness, and crossing to the other side of the river where they had left their horses. By the time the Bloods and Blackfoot had raided their fort, they were well on their way across the prairie, headed for their fastnesses among the Cypress Hills. There was no sign upon them of their having been in a fight, except one of them had been pierced through the arm by an arrow.

The historic hole where they made their gallant stand is pointed out on the island to this day, and is regarded with pardonable pride by their Crees, and with the reverse kind of feelings by the Bloods and the Blackfoot.