How Seven Persons Creek was Named 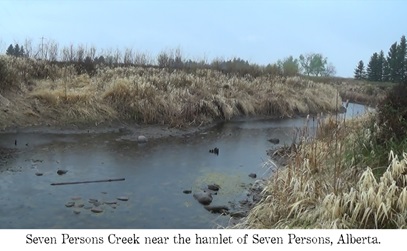 Long, long ago- it would be useless to attempt to find out how many years ago- a party of Blackfoot when out on the war path, had occasion to cross a creek a little way above its junction with the South Saskatchewan. On the banks they found the dead bodies of seven men lying just as if they had been suddenly struck down when following each other in Indian file. Although it was evident that they had been dead for some time, there was not a single indication of decay about them, unless the absence of any vestige of hair upon their heads might be regarded as such. They were not scalped; the hair had simply been removed without any indication being left of the manner of its removal. There was no wound visible on the bodies, nor could the Blackfoot tell whence they had come, or to what tribe they belonged. Being unable to explain this most mysterious find, the braves made up their minds to watch the bodies, to see whether anyone would come to claim them or give them burial. They waited patiently for five days in the neighborhood and watched the corpses closely, but there was no sign of any such party appearing and the bodies continued in the same condition of non-decay. 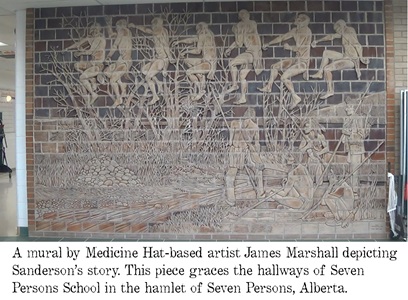 As they discussed various theories to account for the death of the men, someone suggested that they had died of starvation, but a close examination of their equipment proved that they had not been short of provisions. The final conclusion of the Blackfoot was that the seven persons had, in some way, offended the Great Spirit who breathed through the unfreezing opening in the South Saskatchewan, and that he had punished them by striking them dead.

Finally the leader, who was a great medicine man named Yellow Calf Shirt, advised them to build a high pile of stones around the bodies, and leave them as they lay. This was done, and the party went on to fight with their inveterate enemies, the Crees.

It was in the fall of the year that they found those seven mysterious bodies. In the following spring, when the Blackfoot, having occasion to pass near the same point, visited the spot where the seven persons had lain, not a trace of them was to be seen. There was not so much a shred of their clothing nor a fragment of their bones, as would undoubtedly have been the case had they been eaten by the wolves or had they merely decayed.

The stones that had been piled up around them were still there, exactly as they had been left the previous fall, but there was no sign by which they could tell what had carried away the bodies of the seven persons. Ever since then, in Indian tradition, the creek has been known by the name it still bears- Seven Persons Creek.