If you drive west of Fort Macleod on the Alberta Highway 785, you’ll find yourself leaving the prairies for a more rugged terrain characterized by rolling hills, scattered conifers, and rough sandstone escarpments. This territory, which separates the prairies from the foothills of the westerly Rocky Mountains, is known as the Porcupine Hills. At about 20 km west of Fort Macleod, in the southeastern end of the Porcupine Hills, you’ll see (if you’re vigilant; I actually drove right past it the first time) a building built into the side of a hill, next to a long sandstone cliff. The building- the exterior of which is painted beige so as to blend in with the surrounding blue grama and rough fescue grass- is an interpretive centre, and the ancient sandstone cliff to its right is the Head-Smashed-In Buffalo Jump, a UNESCO World Heritage Site. 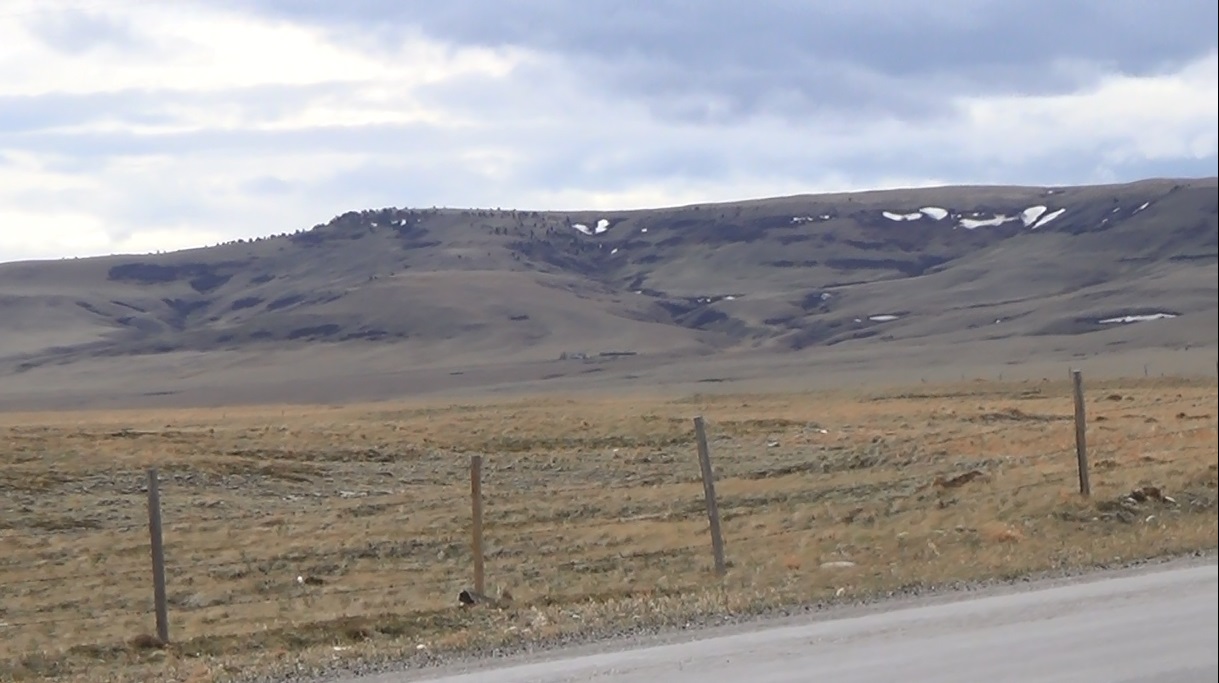 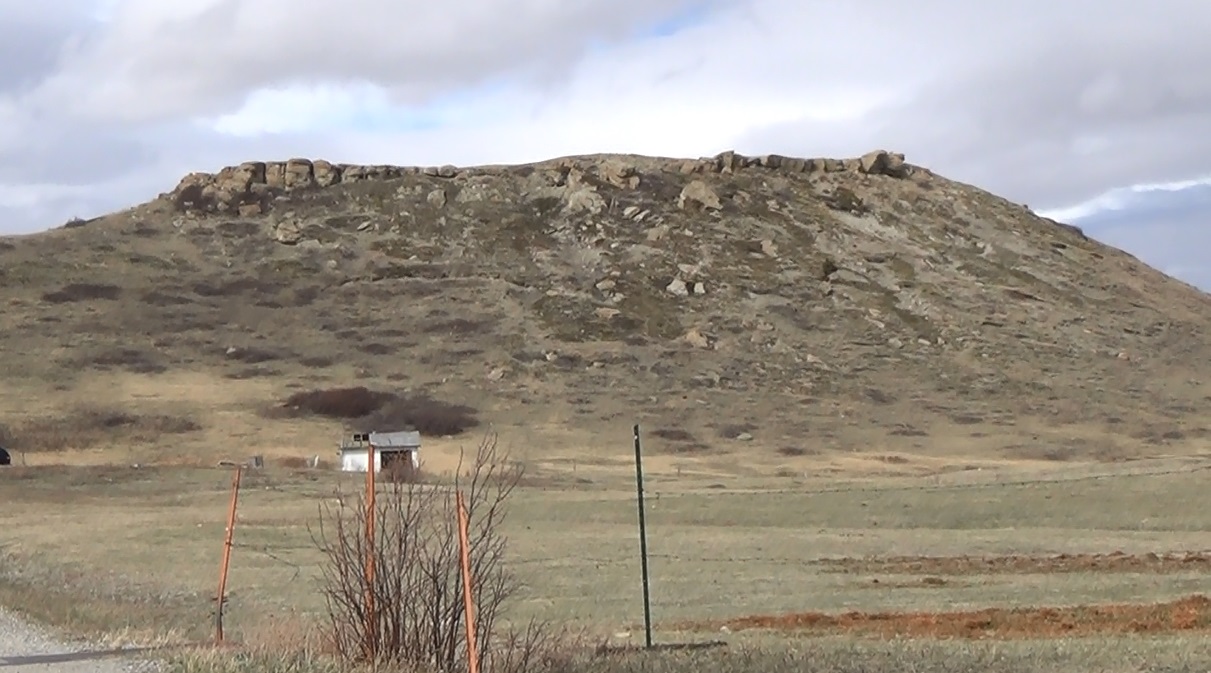 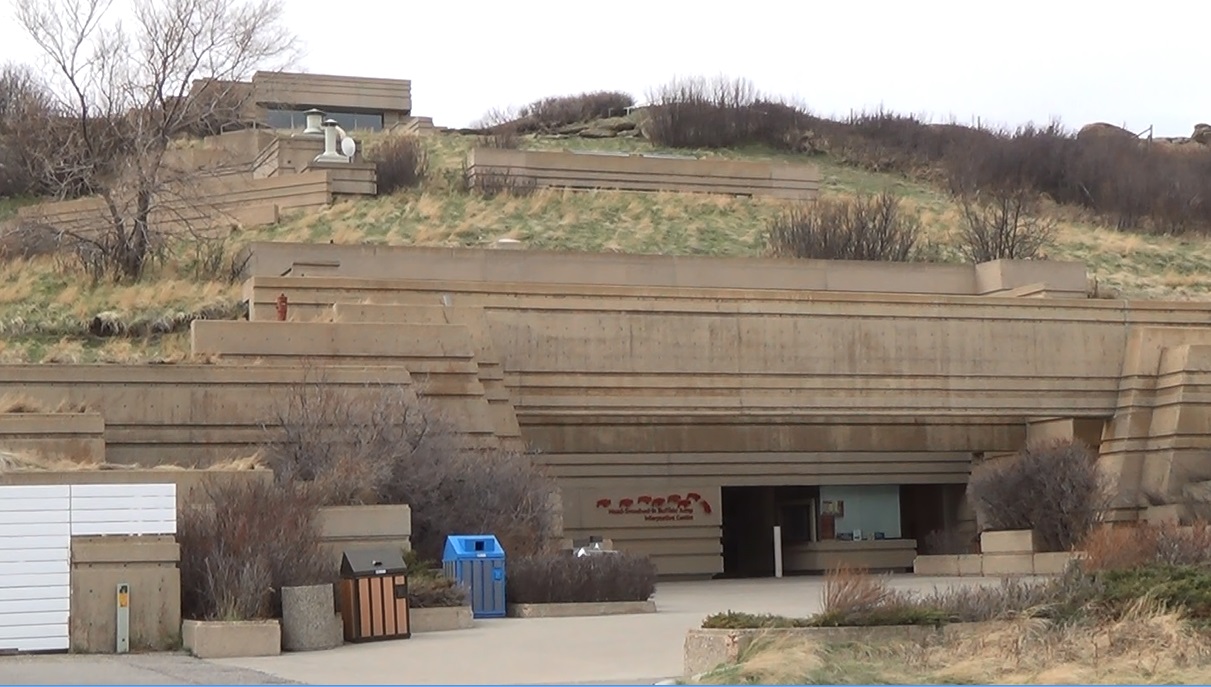 What is the Head-Smashed-In Buffalo Jump?

The Head-Smashed-In Buffalo Jump is one of the oldest and best-preserved buffalo jumps in the world. A buffalo jump (or pis’kun, in Siksika/Blackfoot) is a cliff that the pre-equine First Nations used to hunt buffalo. Using their extensive knowledge of animal behavior and local topography, Indian hunters would trick entire buffalo herds into stampeding over the cliff edge to their deaths. 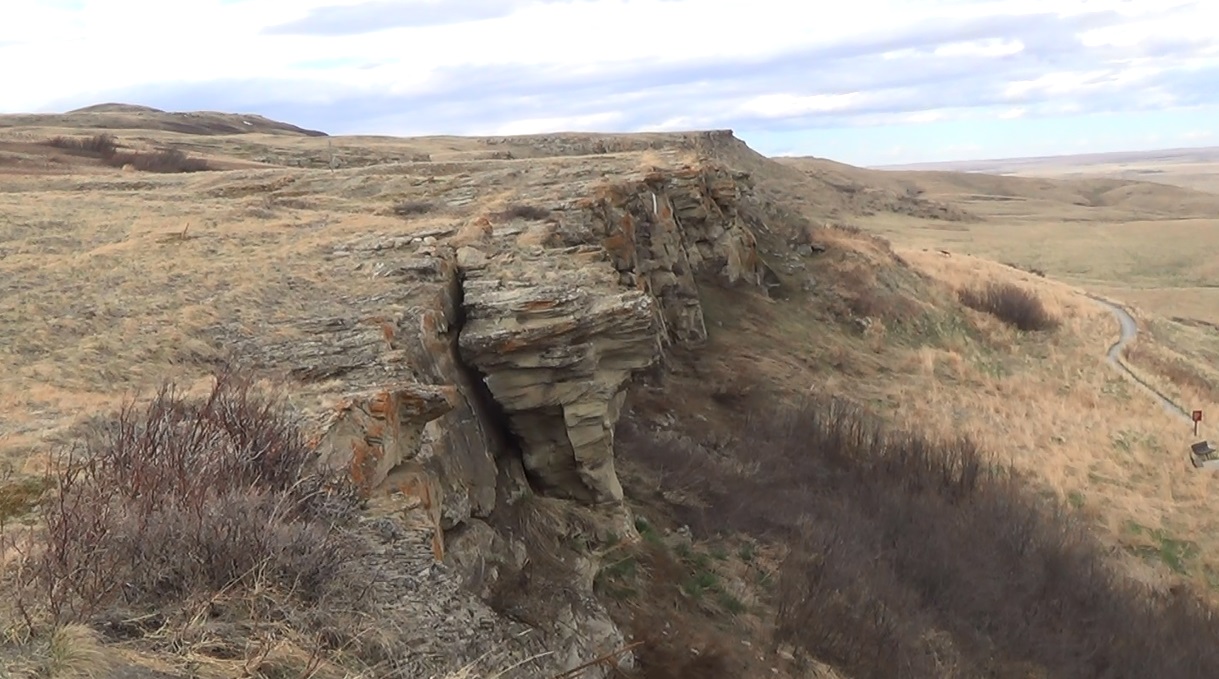 Head-Smashed-In Buffalo Jump was first used in about 3900 BC. With varying consistency, it was used for roughly the next 5700 years. In spite of the Blackfoot’s acquiring horses via trade with the Plains Cree in the 1700’s, and the later proliferation of firearms on the Canadian prairie, Head-Smashed-In Buffalo Jump continued to be used for buffalo hunting until sometime in the mid 1800’s. 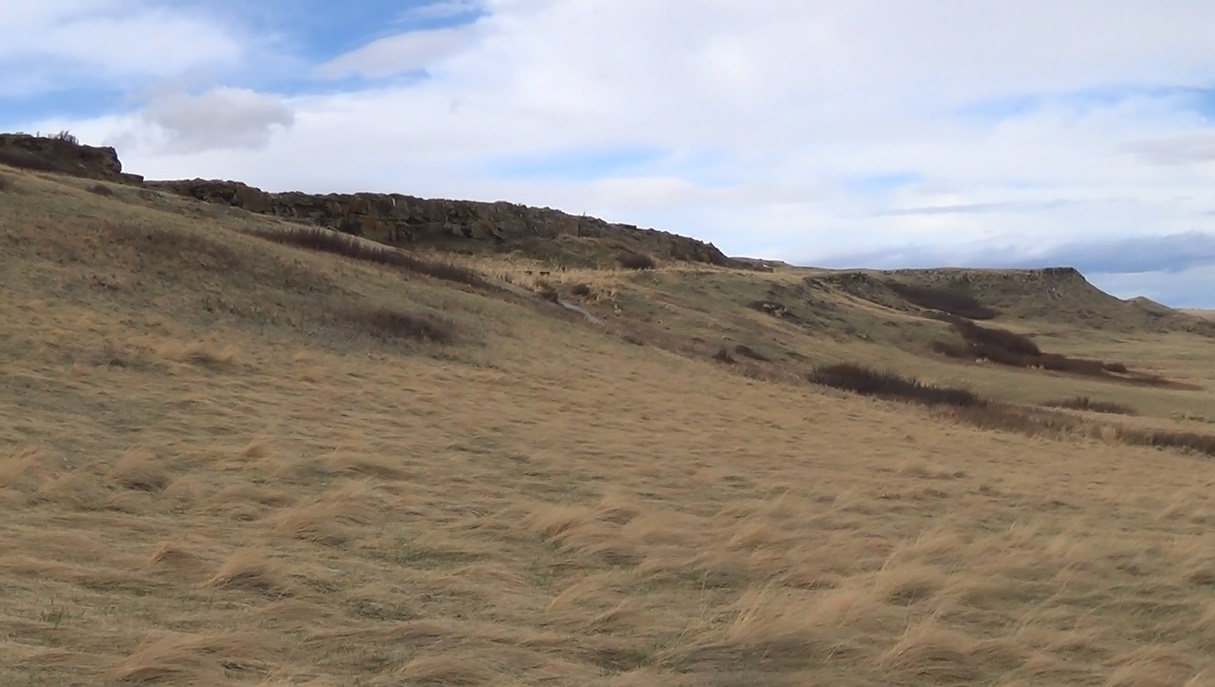 The buffalo jump acquired its strange name sometime near the end of its traditional usage, probably in the 1850’s. According to legend, a young Blackfoot man harboured a desire to watch from below as the buffalo, like a waterfall, plunged from the cliff edge. During the hunt, he waited at the cliff base, with his back to the sandstone wall. Unfortunately for the young man, the hunt was especially fruitful that year. As the buffalo bodies piled up, he became trapped between them and the cliff face. When the hunt was over, the hunters went to the base of the cliff to kill the surviving buffalo and to dismember the carcases for processing. In the midst of the pile, they found the body of the young man. His skull was smashed in. 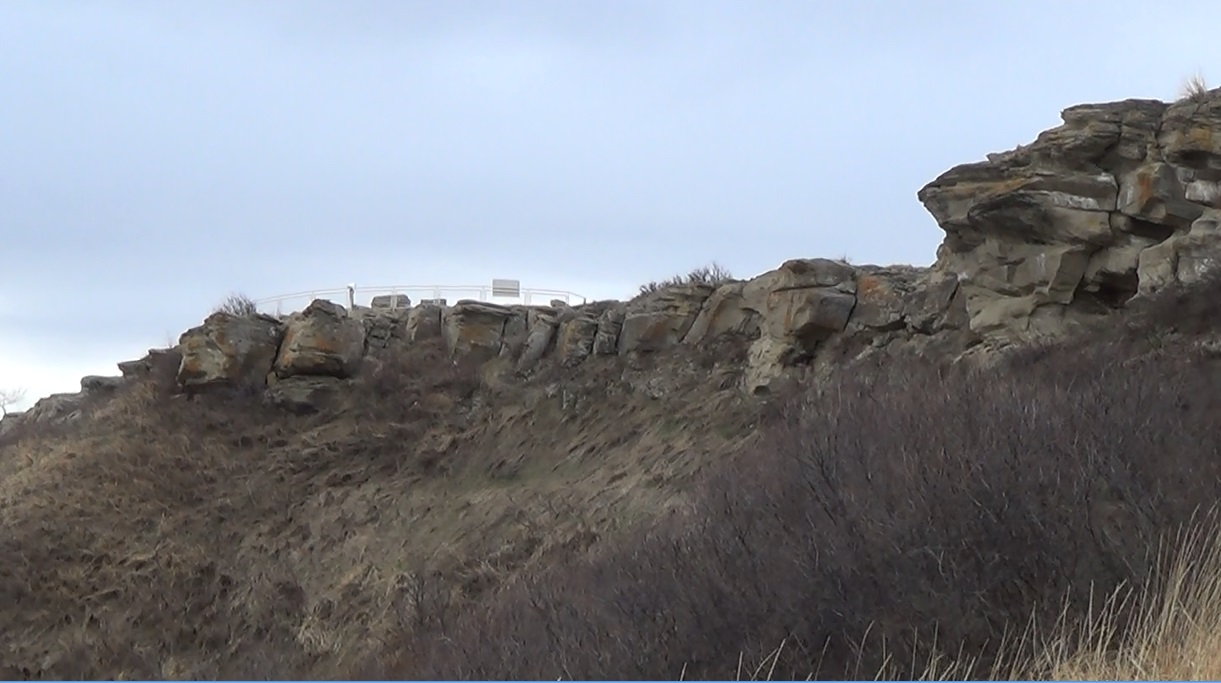 After the demise of the Canadian buffalo herds, Head-Smashed-In lay unused for some time. During World War II, the Canadian military used the phosphorus found in the bones buried at the base of the jump for bullet-making. Later, archeologists began to dig at the base of the cliff, and discovered that the place was an archeological gold mine. At the base of the cliff, they unearthed 12 meters of dirt, buffalo bones and historic artifacts, including some ancient stone tools that had been buried for millennia. Aside from its archeological and historical implications, this find also unearths the incredible fact that the cliff was once 22 meters tall (its current height is a mere 10 meters). Due to its age, condition and newfound historical value, Head-Smashed-In Buffalo Jump was designated a UNESCO World Heritage Site in 1981. In 1987, the interpretive opened up beside it. 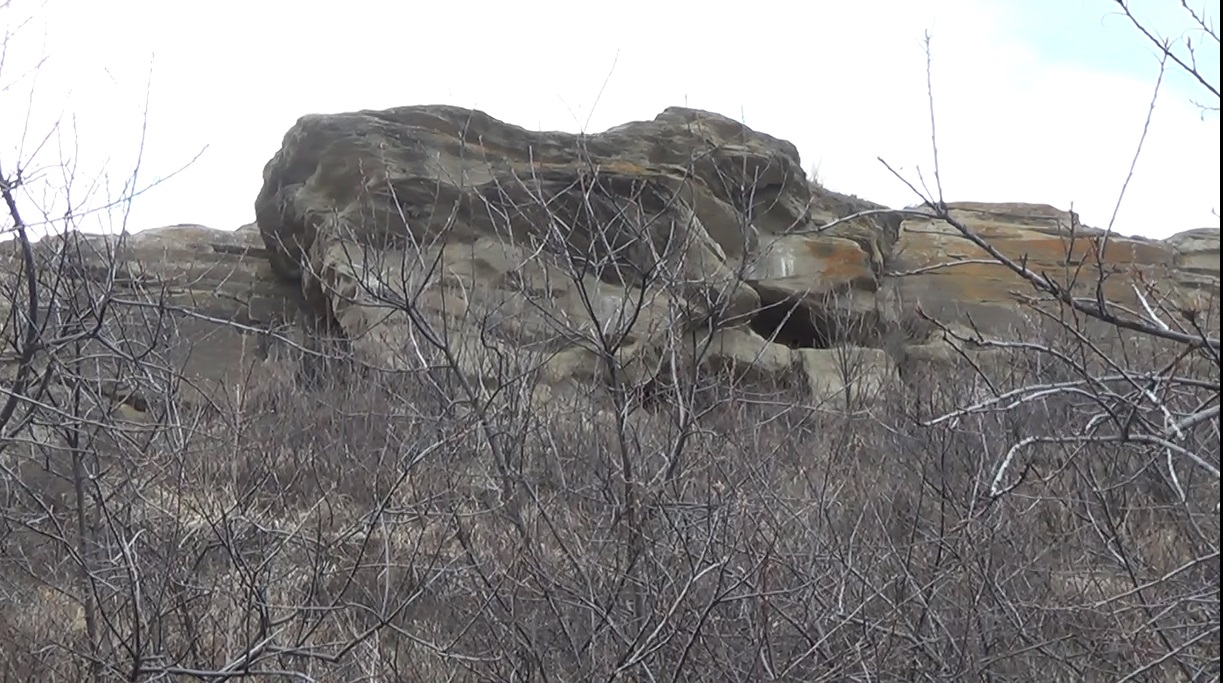 What You Will See

The entrance to the Interpretive Centre itself is a sight to behold. The building is built into the side of a hill and painted the colour of the surrounding prairie, making it tastefully inconspicuous. 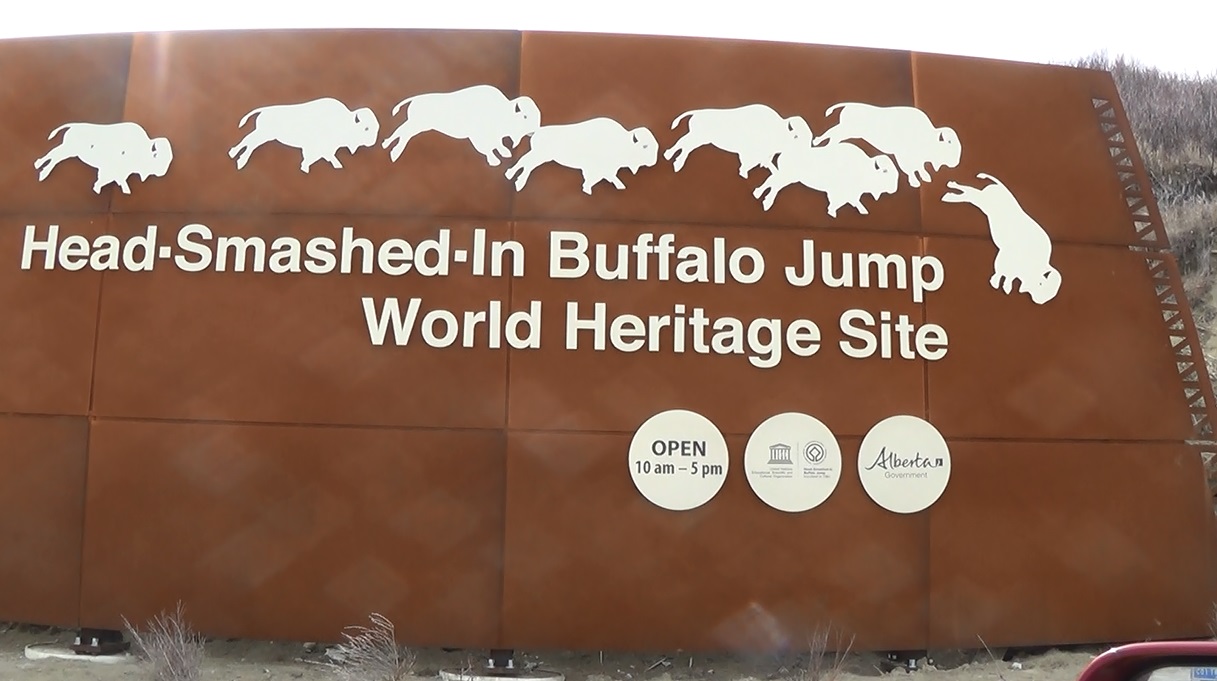 Inside the Interpretive Centre is a front desk, a small gift shop, and five floors (with two additional sub-levels) filled with interpreted Blackfoot artifacts, interactive displays, taxidermied prairie animals and an abundance of information on local history, geology, biology and Blackfoot culture.  On the ground level of the interpretive centre, there is a 60 seat seasonally-operated cafeteria, and on the second level, there is an 80 seat theatre which plays a 15 minute re-enactment of a buffalo hunt shown throughout the day. At the upper level, there is a window that looks out onto the prairie and the distant Oldman River, as well as a door that opens onto a walkway outside. The walkway takes you all the way to the top of the Jump. 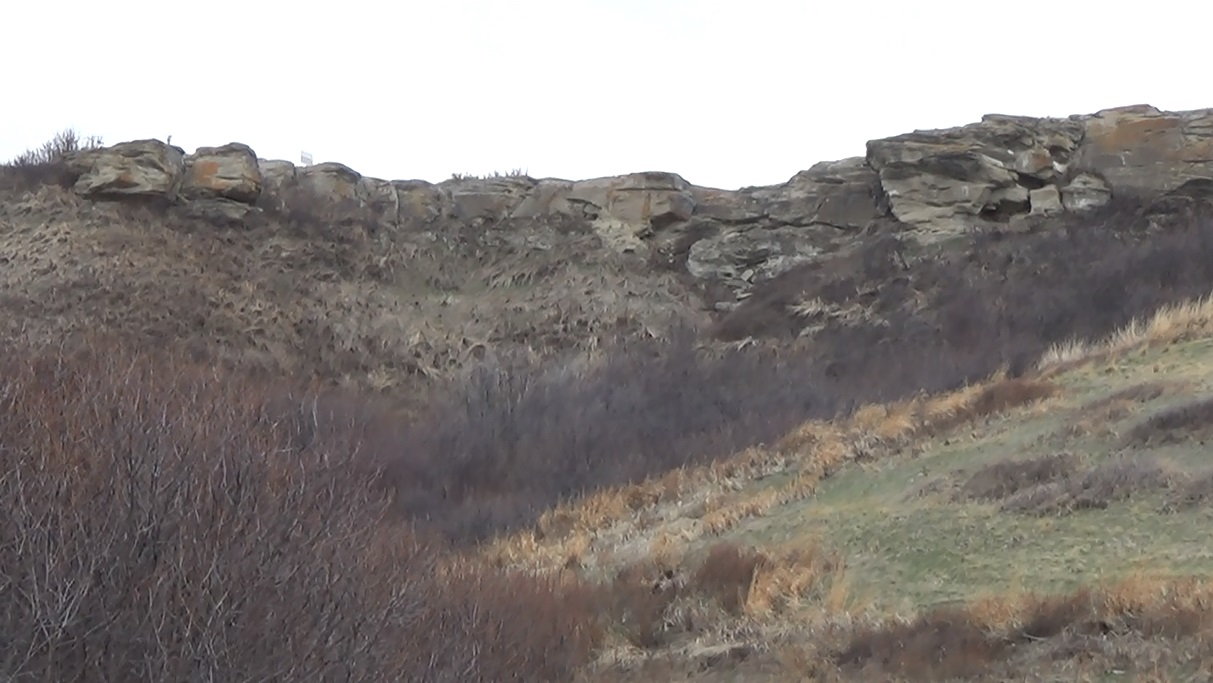 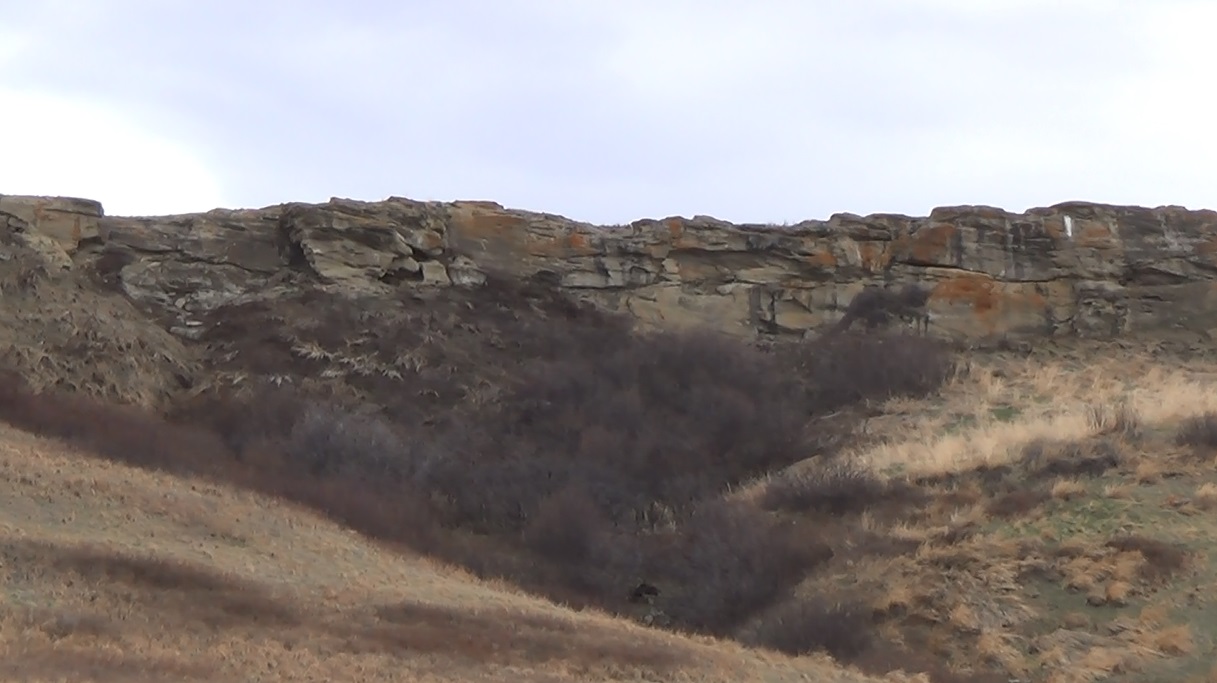 Outside the interpretive centre, at ground level, is a path that travels along the base of the Jump and towards the field on which the slaughtered buffalo were processed.

The Blackfoot Indians, along with other First Nations of the Canadian prairie, depended almost entirely on buffalo for sustenance, clothing, shelter and tools. Accordingly, they took the buffalo hunt very seriously. In order to ensure a successful hunt, the Blackfoot religiously observed special pre-hunt rituals such as the Iniskim (buffalo stone) ritual, which was carried out in order to call the buffalo and confound their minds during the hunt. 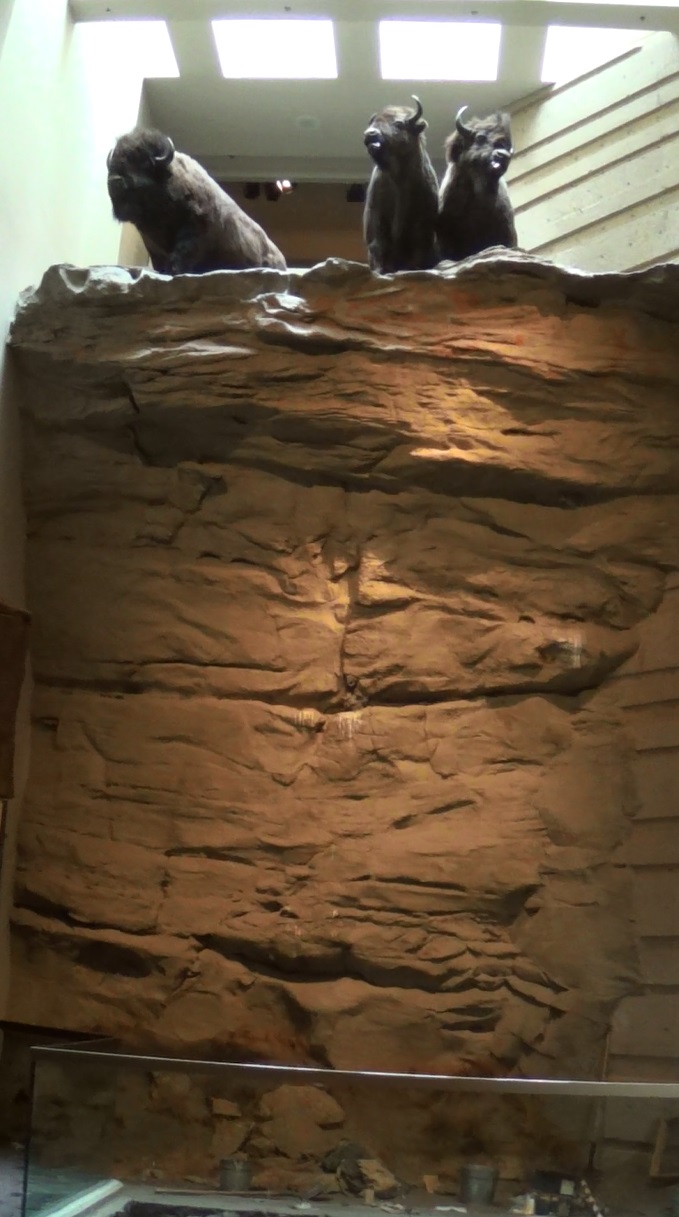 A buffalo hunt could only be conducted in a certain location that satisfied three conditions. First, a hunt could only take place in an area close to freshwater, since water was used in the fat-rendering process that occurred after the buffalo were killed. Second, the area needed to have a cliff, or buffalo jump, that the buffalo could stampede over. Third, and arguably most importantly, the area needed to be frequented by buffalo herds. In satisfying all three conditions- with a natural spring seeping out from under the cliff, the 10 meter sandstone cliff itself, and a gathering place west of the cliff which’s nutritious grasses made it a popular haunt of the buffalo – the Head-Smashed-In Buffalo Jump was often (depending on the locations of the herds) the perfect location for a buffalo hunt. 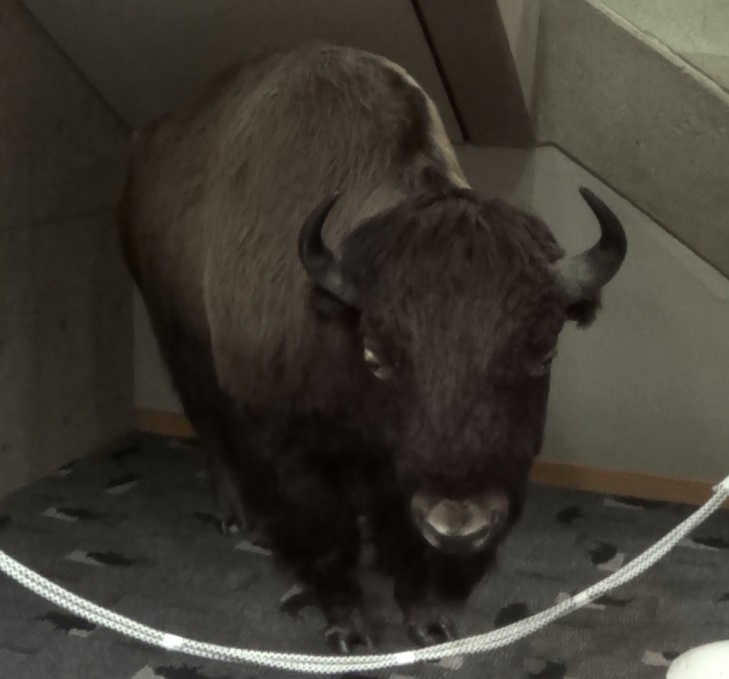 Hunts were almost always conducted in the fall, when the buffalo were in prime condition; after a long summer of grazing, the buffalo were fattened up for winter. Before the hunt, the Blackfoot would build up two drive lanes that extended from the buffalo’s gathering place all the way to the edge of the cliff. The hundreds of stone cairns that comprised these drive lanes were built several meters apart, and were augmented with dirt, buffalo dung, tree boughs and sagebrush prior to the hunt. Band members equipped with buffalo hides would hide behind these cairns and wait. 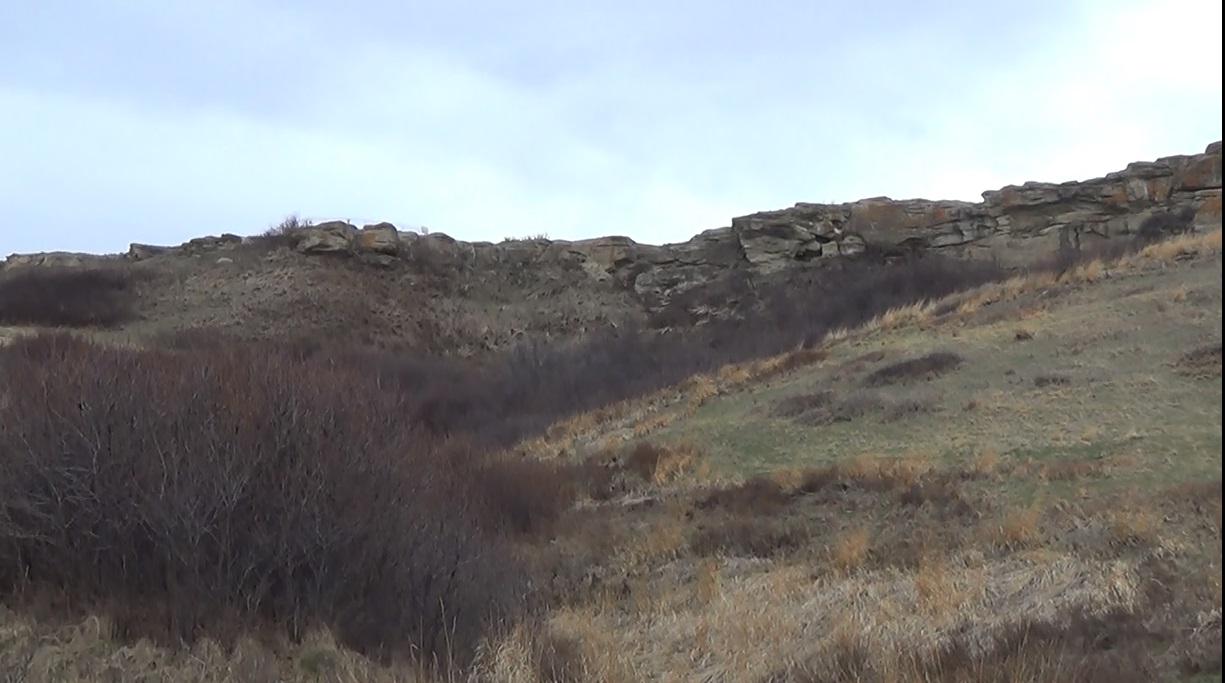 Three elite hunters, known as buffalo runners, were selected to manoeuver the buffalo herds from the gathering place into the drive lanes. These young men, who were often necessarily the fastest and most fit hunters in the tribe, were trained in animal behavior and the topography of the area by seasoned experts. Two of them would don wolf or coyote pelts, while the third would cover himself in a heavily-scented buffalo robe. 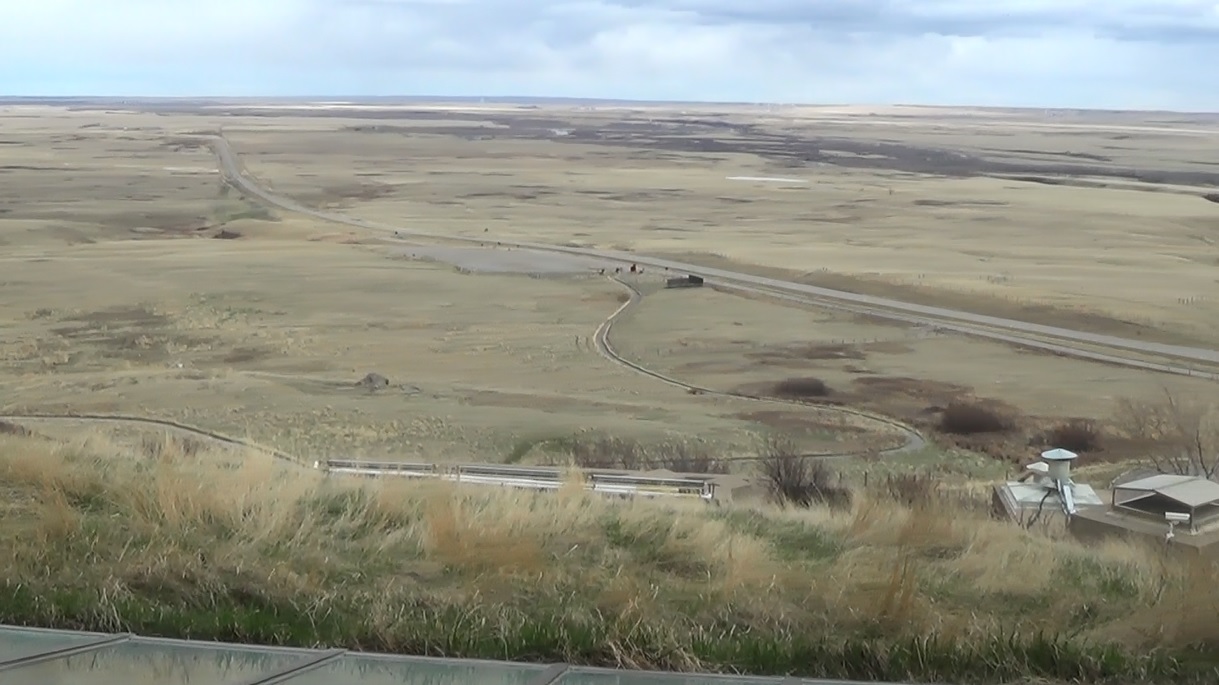 The two hunters clad in wolf skins would conspicuously approach the edge of the buffalo herd on their hands and knees. Although the fully grown buffalo had little to fear from two wolves, the hunters’ presence nonetheless made them uneasy. Instinctively, the adult buffalo moved to protect the smaller calves. 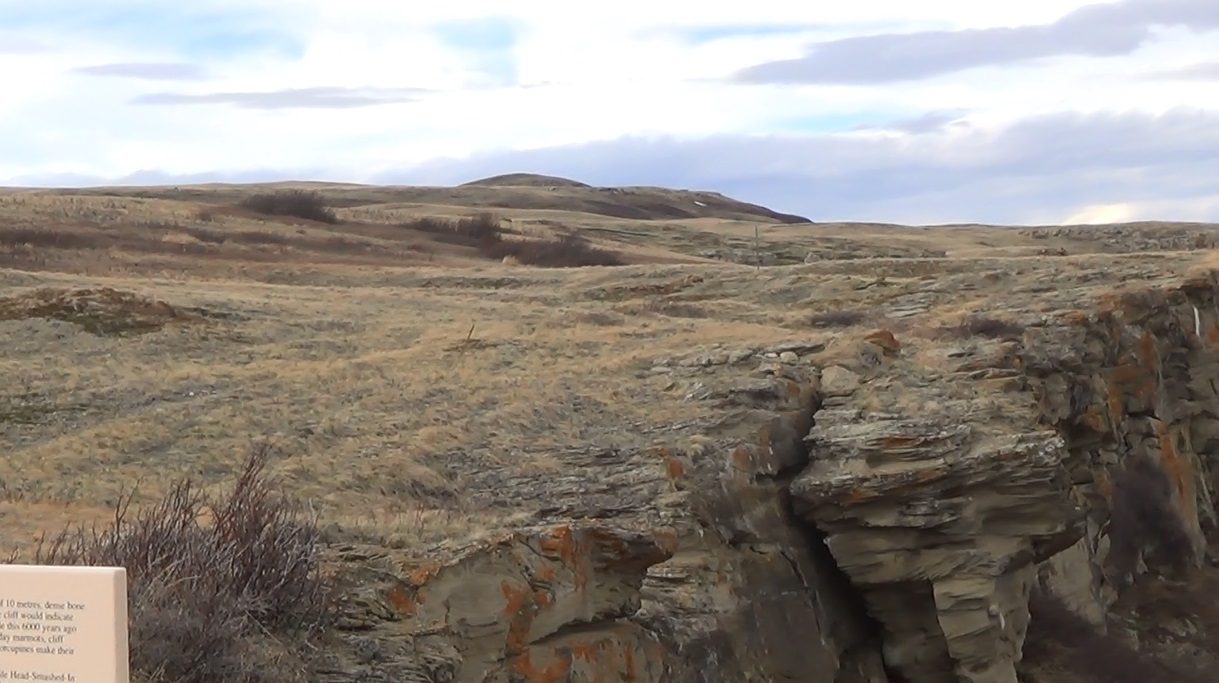 At the same time, the hunter wearing the buffalo robe would approach the herd from the direction of the drive lanes, bleating like a baby buffalo. Wary of the wolves, the herd would slowly move in the direction of the drive lanes in order to protect the calf. In this way, the three buffalo runners would slowly manoeuver the herd into the V-shaped corral that funnelled towards the edge of the cliff. This process could take several days of continuous effort by the runners. 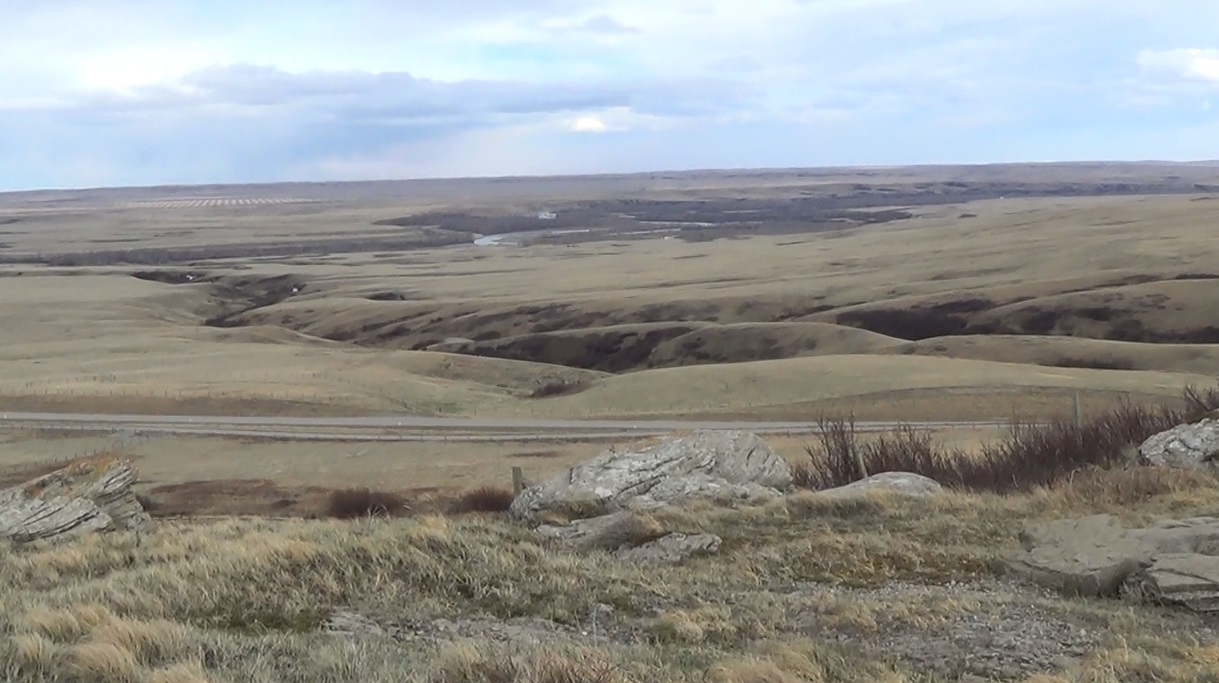 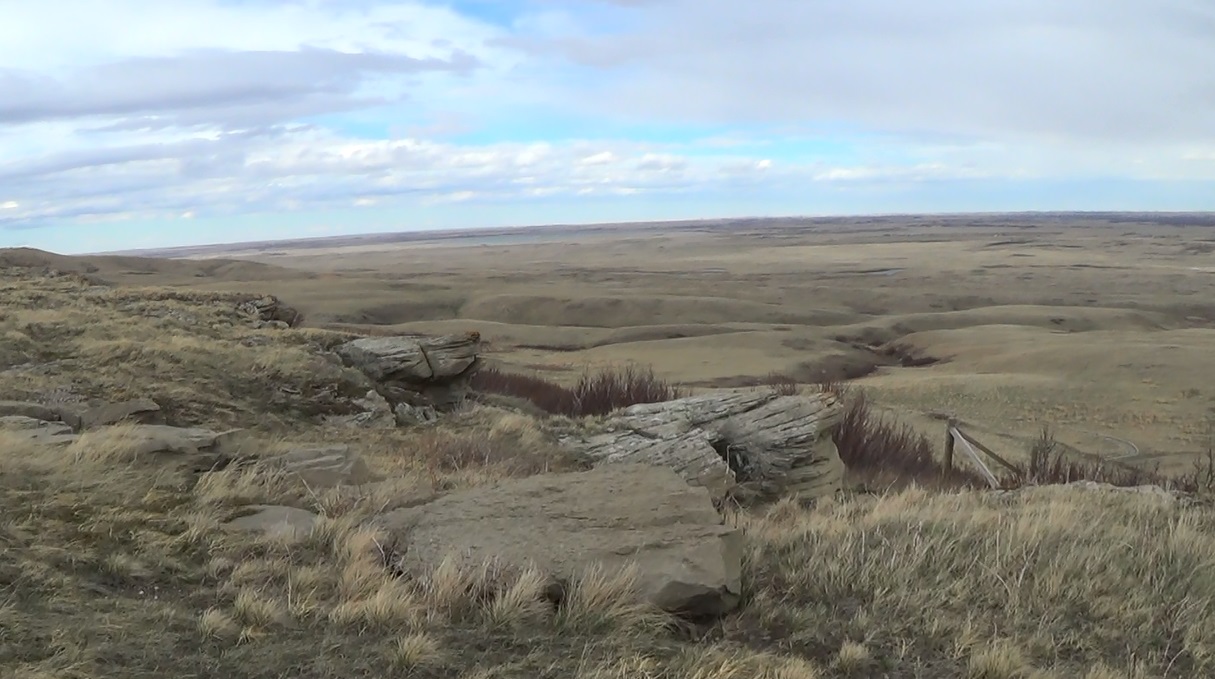 To the lazy eye, the cliff is invisible at the top of Head-Smashed-In Buffalo Jump; it appears as if the prairie continues indefinitely for miles and miles. It is only at the very edge of the cliff that the drop-off is starkly apparent. Since buffalo have relatively poor eyesight, they would have been totally unaware of the cliff until it was too late. Unable to stop due to their massive momentum, the buffalo would stampede over the edge of the cliff. 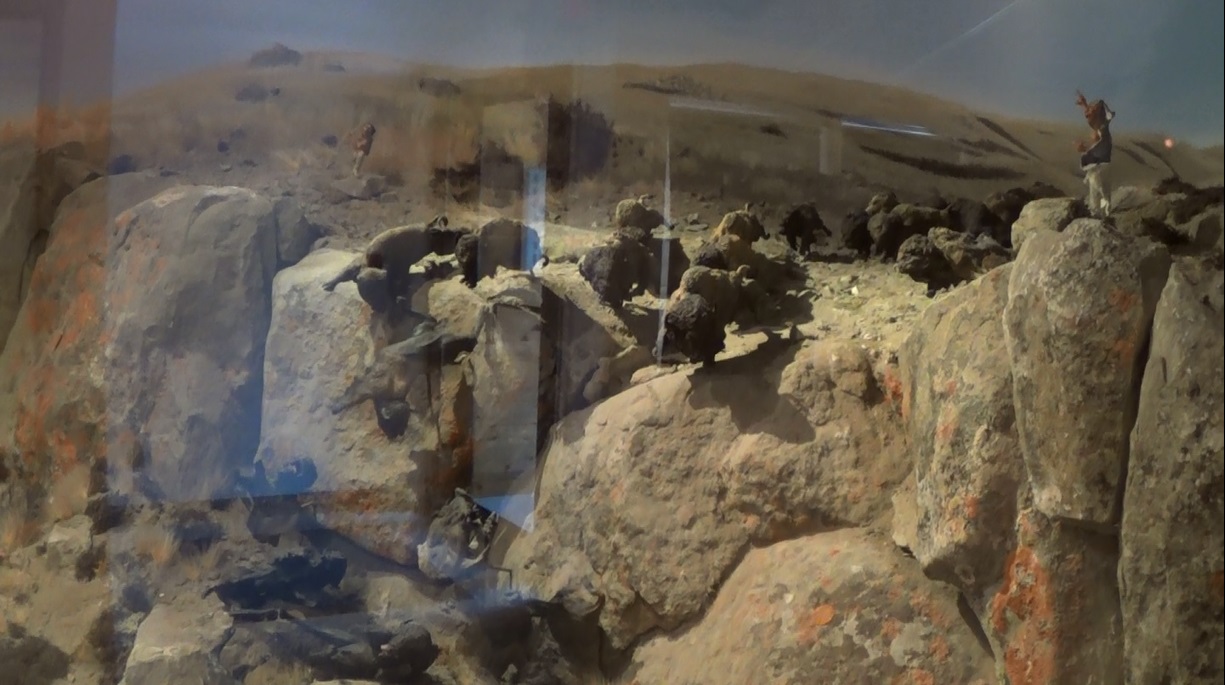 The buffalo that weren’t immediately killed by the long drop were slaughtered by hunters at the cliff base. The Blackfoot used spears, bows and arrows, atlatls and stone mauls to kill the surviving animals. The Blackfoot believed that if any of the buffalo escaped, they would reveal the secret of the buffalo jump to other herds and thus foil future hunts. 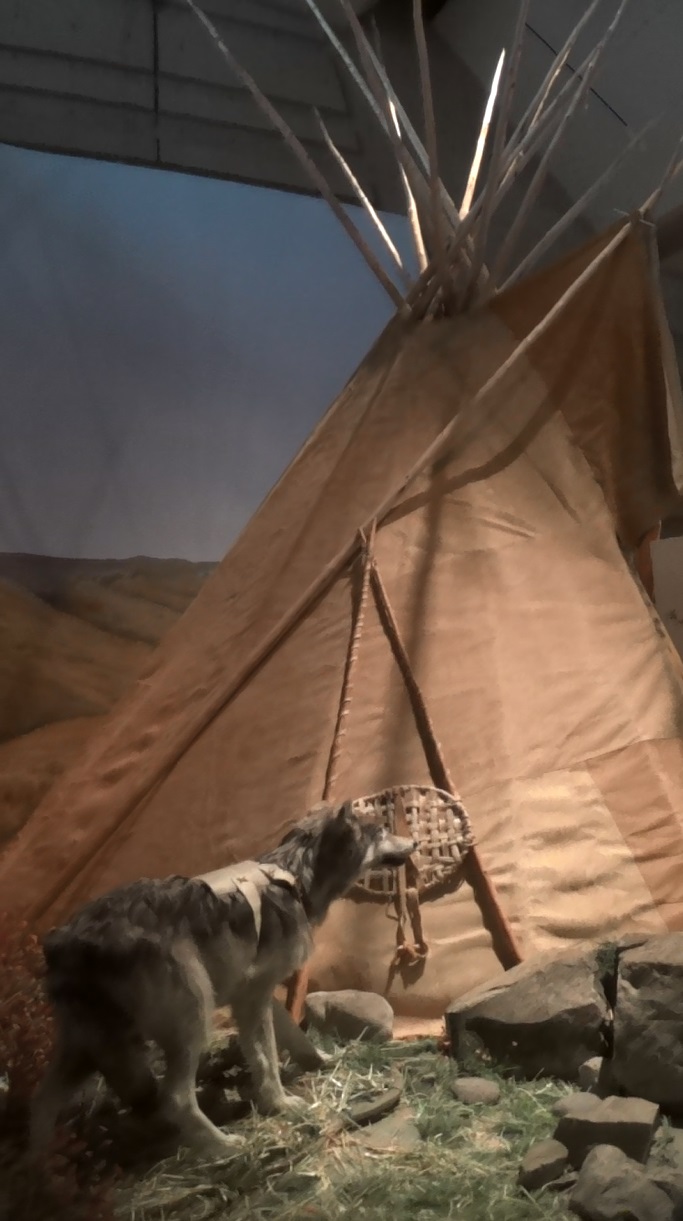 When all the buffalo were slaughtered, the men of the tribe dismembered the carcasses with stone axes. Then, they dragged the remains to a field close by to be processed. Women cut the meat into strips and hung them to dry in the sun on wooden racks that they had erected. Others rendered the marrow from the bones and the suet from the kidney and loins into tallow in stone-heated, skin-lined, water-filled pits. The hides were stripped from the bodies, scraped and tanned with brains. Bones and horns were made into tools, and the stomach and intestines were made into bags and containers. Sinews were dried for use as cordage and bow strings, and organs such as the heart, liver and tongue were enjoyed as delicacies. Finally, when the meat had dried completely, it was pulverized by stones and mixed with the rendered fat to produce huge quantities of pemmican, a nutritious and hardy food that would last throughout the winter and until the next hunt.