A Drama in the Klondike

The madness of gold has haunted many minds, and in the country where the earth contains in its immense plains the germs of life, many bloody tragedies have taken place: dark dramas, frightening battles witnessed only by the birds that haunt these deserted regions; it is one of those lived tragedies that we report here, whose theatre was these desolate solitudes of the Artic Barren.

As night fell, an Indian sleigh with copper runners hauled by six large dogs pulled up in front of the Stewart River Inn.

The inn stood alone, in the middle of the immense snowy plain. The snowflakes descended so tightly that all of the horizon had vanished, and the eye could not see beyond where the hand could reach. For days and days they had been falling like this, vertically, silently, without a breeze swaying their descent. The trees glistened in the halting reflections of the moon, and the inn itself was a shite tablecloth from which a light smoke rose through the fireplace.

The dogs, standing straight on their paws, began to bark, and two fur-clad men stepped out of the sleigh. They were as white as the ground they walked on, and great clumps of ice hung from their beards.

“Unharness the dogs, McDonald,” said one of them, as he unloaded the sled.

When the beasts were free, they began to dance and yelp so loudly, leaping after their masters, shaking their fur, mouths agape, tongues lolling out, that the men had to lean on the door so as not to be knocked down. The cold, now more intense than before, made them shiver. They knocked on the shutters.

But the innkeeper had already opened the door.

“Come in, if you please, gentlemen…”

A good fire was roaring in the red-hot stove; lamps gave the room a cheerful air, and the two men, having removed their furs, sat down at a table, placing a small wooden box with a copper circle in front of them.

They laughed, and the man with the box replied, “No, no… We are not parting with this… This is three years-worth of work… and it’s worth it…”

“Damn it! And will you spend the night here, gentlemen?”

“Without a doubt. We come from Dawson and, weather permitting, we will head south tomorrow to Skagway, Alaska.”

“Not a good journey.”

“Yes, but after that, Canada, and the family…”

At the next table, beside the red stove, sat a man who was finishing his dinner. For a moment, he tilted back in his chair, as if he had been listening to the conversation. When the newcomers spoke of Canada, he rose slightly.

“Pardon me, gentlemen, I am Canadian, like you… and if I understood correctly, you want to reach Lake Labarge. Me too. Unfortunately, I have to cross this snowy wasteland foot by foot, on snowshoe. I lost everything in the hillsides of the McQueslen camp, where, moreover, no one ever found gold. I spent two years of hard work and terrible misery. It’s insane to admit… I left the Klondike on foot!”

“Tough,” one of the two travelers whispered.

“So tough, that I’m afraid I won’t be able to make it. I would be obliged if you accepted me, a fellow countryman, as your travelling companion… Especially,” he continued, more quickly, “since the great Jukou is unpredictable, and because it is better that three men cross this bad corner of the North together. I know very well that my request may seem indiscreet… but the misery, the exhaustion… I am an old dog handler, and I know the landscape, and I can read the snow like a book. I will make myself useful. My name is Fred Rolf.”

The two friends looked at each other.

“Agreed! We will leave tomorrow morning around seven o’clock.”

At daybreak, the three men left the old stopping house.

They settled into the sleigh, the two companions in each other’s arms, wrapped in furs, one sitting on the chest containing the precious gold powder.

“Here we go,” said Fred Rolfe, holding the handlebar like a plow. He raised his rifle, which he carried in a sling, and clicked his tongue.

The dogs rushed off. He goaded them with his voice, leading them skillfully, without blows, vociferating in the great silence of the snow.

“Ehoo! Ehoo! … Much! … Ti-kla-kaa!” The animals galloped in full action. “I was taught by the Indian chiefs,” he said.

The sled flew at full speed.

“Are you sure you’re on the trail?” asked one of the men.”

“Sure and certain. Hold on.”

They clung to each other.

“But we are going straight towards the lake, you…”

The voice had no time to finish. Two sharp cracks, without echo, broke the silence.

Man Versus Dogs: A Vain Struggle

In two quick shots, aimed at the back of the neck, Fred Rolf had struck down the two men. The maneuver had been so precise, yet so disorienting at the same time, that they hardly had time to imagine their fate, and when the first man rolled face first into the snow, the other fell without a cry, without a rattle.

At the report of the two gunshots, the dogs had leapt up and pulled at their harnesses so furiously that the sled almost capsized. Then, with stiff paws, hairs bristling, they stopped with glaring eyes and howled in such a terrible voice that the murderer shuddered and threw himself back, as if he feared that in this immense loneliness their voice could raise the alarm.

But he quickly regained his composure.

Here, under the death of the snow, in the infinite silence, in the wilderness ten miles from any habitation, at a time when men huddle like animals in their lairs, who would hear?

He shrugged his shoulders and commanded in a dry, violent voice:

The dogs continued to howl.

He looked around. The blood of his two victims was already freezing and making a red stain on the snow. He thought for a moment.

He wrapped a blanket over each head and tied it around the neck with sinew cords torn from the sides of the sleigh. Then, with strong lashes, he pushed the reticent dogs into the trail, and all alone, became to laugh.

He was not wrong! It was the lake. The lake is stingy and discreet. He doesn’t return what he is given, and doesn’t betray his friends!

He brought the dogs to a halt and cleared the snow. When he was on the solid ice, he tested it with his heel, and as it sounded thick, he made a large hole, sawing a disco of ice with a prospector’s saw that was in the sled.

The water was calm and glistening. He took the two shrouded bodies and slid them in, one after the other. There was a very light lapping, then nothing. 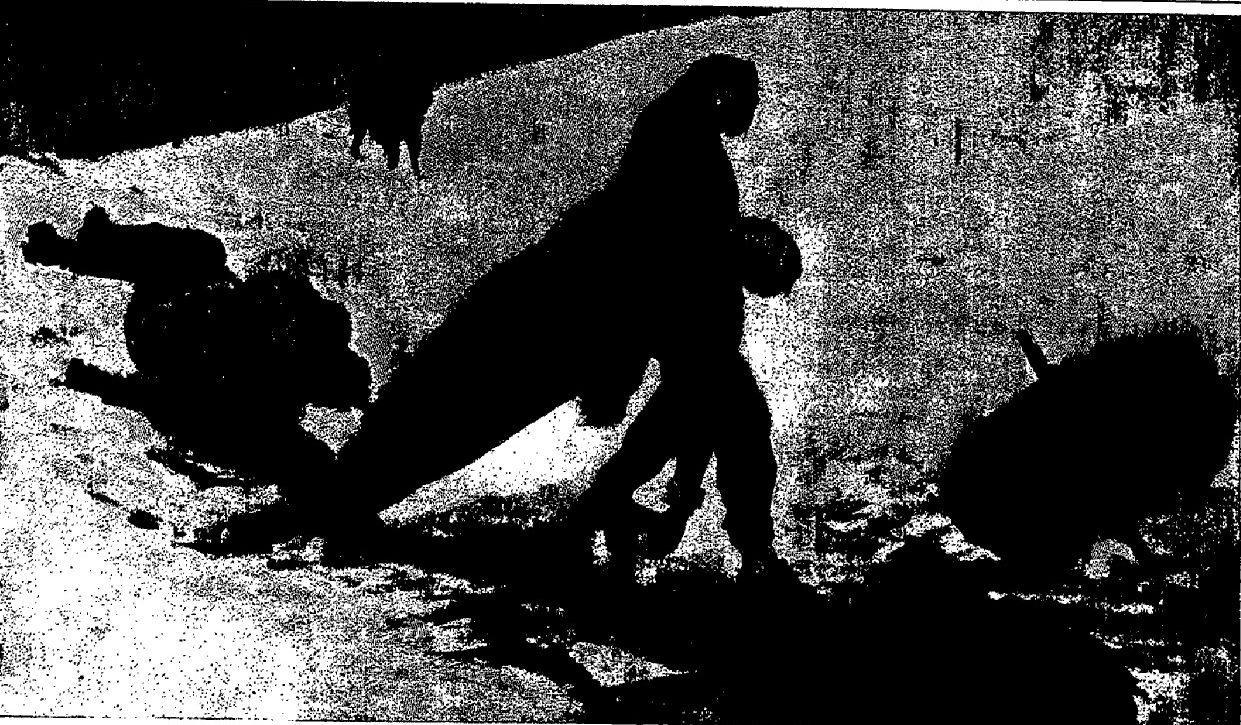 Fatigue and anguished gripped his temples. And then a strange moan rose, wept, moaned – the lamentations of the big dogs which howled at death. It had to be done, however. He picked up the circle of ice he had removed, replaced it, and leveled the snow he had brushed aside with his boots.

Only then did he turn back to the sleigh, and what he saw sent a shiver of terror through his spine.

The six bristling dogs, silent now, looked at him with fire in their eyes, showing their fangs. A terrifying calm descended upon the plain. He could hear his heart beating, and the blood was pounding in his ears.

He muttered, “No, it would be really too stupid to back down in front of the dogs. Back! Ho!”

The dogs began to growl. He tried to approach the sled to pick up a weapon, but fiery eyes followed every move, and open mouths extended in his direction. A visceral fear took hold of him, as did rage- a rage stirred by seeing the coveted chest, within reach of his hand yet defended by the furious beasts, sink deeper and deeper into the snow until it disappeared.

He sneered. “Oh, that! After I got rid of the men, I would tremble at that!” 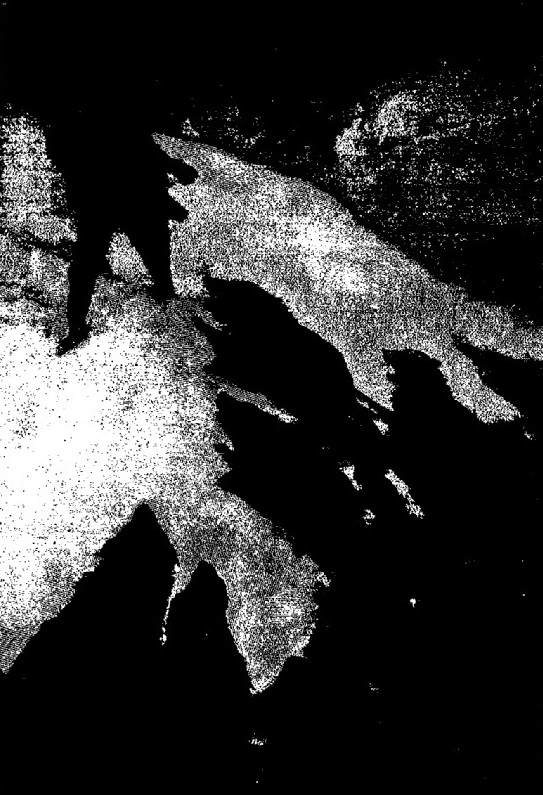 His whip lay near the lead dog. He made to grab it, but the beast, a real wolf, rose up and made a tremendous leap for his throat. The momentum was so strong that the dog tore through his harness, tearing off a strip of skin and overturning the sleigh. The man leaned back and mechanically searched his pockets. Nothing. No gun, no knife. He was alone, disarmed and confronted by raging beasts. A horrible fear gripped. He spoke to himself aloud, to hear the sound of a human voice, saying, “Coward! Imbecile! Fortune is right there in front of you, six steps away, and you are afraid! Coward! Coward!”

For the second time, he tried to advance. But the dogs rushed at him. He felt their hot breath on his face. One of them dug into his cheek with a fang.

Night came very slowly but surely. A cold, a great cold, invaded him.

He took one last glance at the sinking sleigh and the vanished chest, at the six furious dogs whose eyes blazed in the shadows, and fled in silent horror, without daring to turn his head, his eyes filled with visions of his crime, hearing only the sound of his footsteps on the snow, and the sinister voice of dogs which, with fangs raised towards the nascent moon, howled at death.

Nine days later, the courier, who carried the mail by sleigh, passed near an abandoned sled on the river. Suddenly, his dogs started barking at a strange black form in the snow. He then discovered, at the bottom of a hollow pit in the snow, among torn ropes and pieces of leather, six dead dogs, frozen to the ground, their muzzles stuck to the snow… and near the, a chest, a wooden box with a copper circle…