Over the past two months, I’ve delved into certain branches of both First Nations and Euro-Canadian settler folklore which I plan to make the subjects of some big upcoming videos. One recurring motif that permeates the legends I’ve been researching is the idea that extraordinary and mysterious phenomena are creatures of the past- denizens of some misty, twilight era that dissolved with the dawn of the modern age. This notion is challenged every day by 21st Century eyewitnesses who report unusual activity in their homes, strange lights in the sky, and unexplainable experiences in the backcountry. One such eyewitnesses contacted me this past February and asked me to share his chilling encounter with you, hoping that someone in the comments will be able to shed some light on the mysterious entity that haunts the woods surrounding his family’s cabin.

The witness, whom we’ll call Pierre, is a 40-year-old Quebec miner who owns a remote cabin in the woods near the St. Lawrence Delta. He purchased this cabin in 2017, and later learned that the previous owner had reportedly sold it because he believed that some beast or demon haunted the surrounding woods. He has requested anonymity, and so I will not reveal his real name nor the precise location of his cabin. Pierre is not a native English speaker, and so I have edited his report for the sake of coherency. Aside from some grammatical and dictional corrections, however, his report has not been changed in any way. This is his story:

“On the evening of January 17th, 2020, I drove out to my cabin with my dog, leaving my wife and kids at home. I went to sleep in my bedroom. At about 10:30 p.m., I was awoken by a loud noise outside. My first thought was that a thief had broken into my garage.

“I opened the door and looked outside but saw nothing. However, I could hear loud sounds coming from both my garage and the north wall of my cabin. It sounded as if someone was using a metal bar to knock on the door of my garage and the cabin wall. I switched on the outside light and the sound from the north wall stopped, but the sound from my garage continued. At this point, I still believed that I was dealing with a thief. 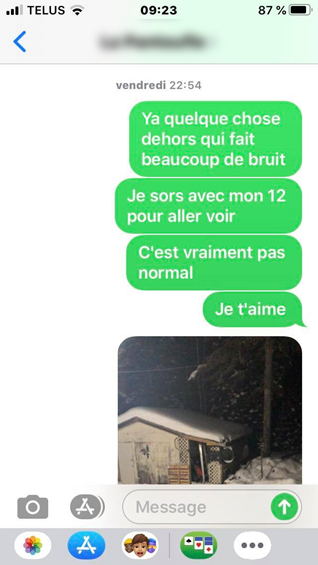 “I grabbed my shotgun and put two shells in the magazine, leaving a third shell in my pocket. Then I sent a text message to my wife. If I translate the message, it says, ‘There’s something out there that’s making a lot of noise. I’m going out with my 12-gauge to check on it. It’s not normal. I love you.’

“I opened the door, which is on the west side of the house, and stepped out onto the patio. At that point, a noise was still coming from the garage. When I put my foot on the first step of the stairs leading down from the patio, the noise stopped.

“I walked over to my garage with the intention to look inside, but when I arrived at the corner of the north and west wall of my cabin, I saw something very tall, thin, and dark gray crawling on the cabin wall. I just saw one long leg, a long thin torso, and one long arm. I would guess that it was between 7-9 feet tall. As I looked, the thing disappeared behind the cabin’s east wall. I have a light with a motion detector on the east wall, and when the thing crawled over there, the lightbulb exploded.

“I was petrified. My brain couldn’t rationalize what my eyes had seen.

“I chambered the first shell in my shotgun and walked over to east side of my cabin. There was nothing there, nor where there any signs in the fresh snow. I thought that my eyes must be playing tricks on me.

“I went over to my garage and looked inside. There was no sign that anything had been in there. Nothing was moved. Three full bags of garbage inside the garage were all intact.

“I checked around the garage but saw nothing unusual. I made to return to the patio, but just as I was turning my back, I caught a glimpse of a small creature, with a height of around 3-4 feet, jump from the back of my garage into a tree.

“I went back into my cabin and grabbed my bulletproof vest, my Type 97 semi-automatic rifle, and four magazines. Then I called my wife. I explained the situation I was in and sent a video, telling her to call me in the morning after she woke up. If I didn’t answer my phone, I told her to call my friend, Tony, and ask him to come check on me, and to bring a loaded gun with him. I told her to tell the kids I love them. 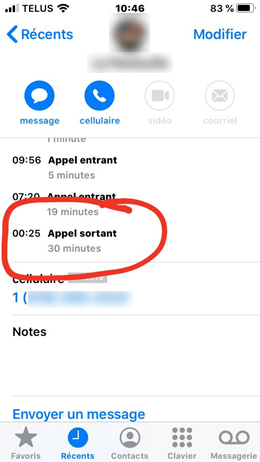 “She told me to call the police. ‘OK,’ I said, ‘but what do I tell the police? That something very tall was crawling on the wall, and that something like a kid jumped into the tree? I’ll finish my night and the hospital in handcuffs!’

“I said goodbye to my wife and returned outside. Immediately, the noise in the garage resumed. Like before, as soon as I put my foot on the first step, the sound stopped.

“In my head, I thought that what I was seeing was not possible. I am 40 years old, and have hunted and trapped for years, but I have never seen anything like the creatures I was seeing that night.

“I went back inside the cabin and let the dog outside. He ran to the back of the garage and started barking at something in the trees. He also seemed interested in something under my pickup truck, but when I checked beneath the truck, I saw nothing.

“When it seemed clear that I was no longer in danger, I checked my game camera, which is connected to my cell phone, to see if it had captured anything unusual. I discovered that the camera had stopped working at around 10:00 p.m., about half an hour before I was awakened by the noise.

“I don’t know what it was I saw that night. I’ve asked some people, who have suggested that the things I saw might be aliens, skinwalkers, or wendigo. I don’t know. Before that night, I didn’t believe in anything like that. But I know what I saw, and I can’t explain it.

“Every time I go to the cabin, I keep a gun near me. Every time I sleep there, I check the door 3-4 times during the night to ensure that it’s locked. That’s not normal.

“I admit that I remain traumatized by that night. Every time I go to bed, I think about it. I hope that someone on YouTube can help me figure out what those things were. I just want to protect my family, and to be ready when those creatures return.”

There forests of Quebec are home to all kinds of nocturnal wildlife, including black bears, wolves, lynx, raccoons, foxes, opossums, and flying squirrels, but nothing resembling the frightening creatures that Pierre encountered on the night of January 17th, 2020. Old French-Canadian folklore contends that the forests of Quebec are haunted by loups-garous, or werewolves- apostates who transform into wolves or wolf-like men at night. Another old settler tradition of the St. Lawrence River Valley tells of little mischievous goblins called ‘lutins’, who live on the fringes of the civilized world and delight in pestering their human neighbours. And the Innu (Montagnais-Naskapi) Indians who have inhabited the forests of eastern Quebec for millennia traditionally believed in a variety of preternatural entities, including two types of elusive dwarves with magical abilities, as well as a gaunt cannibalistic monster called the Wendigo.

What do you think Pierre saw on the night of January 17th, 2020? Let me know in the comments below.