Back to Famous Black Canadians 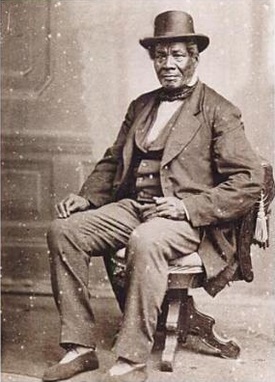 For many people, the word “voyageur” may conjure up images of a rugged-looking French-Canadian, with a red cap on his head and a colourful sash around his waist, hauling a birch bark canoe over some portage trail through the forest. Others may picture a glarled Scotsman clad in buckskins and woolen tartan pulling the oar of a York boat on some wild river. Very few would associate the word with a genteel-looking black man wearing a top hat and a three-piece suit, yet that is the just the sort of image you’ll come across if you look up George Bonga, a famous black Canadian who was as much a voyageur as any Scotsman, French-Canadian, or Metis to paddle the waterways of Rupert’s Land.

Born in around 1802 in Duluth, Minnesota, George Bonga was a third generation frontiersman. His grandfather, Jean Bonga, had been the indentured servant of a British Army officer stationed at Fort Mackinac (situated on an island in Lake Huron). His father, Pierre Bonga, was a fur trader who served as the guide of Alexander Henry the Younger- a great Canadian fur trader and explorer- while his mother was an Ojibwa Indian whose people had inhabited the wilderness of North America for millennia. When he was eighteen years old, George Bonga- a powerful man who stood 6’6”- followed in his forefathers’ footsteps and found employment with the American Fur Company in Northern Minnesota.

George Bonga was a humorous, good-natured voyageur who quickly earned himself an excellent reputation among the Company men. He was strong and hard-working, and was said to carry a much heavier load on the portage trail than most of his contemporaries. He had spent his childhood in Montreal, Quebec, where he had received a good classical education, and thus was just as comfortable among the Company’s learned clerks as he was among their rugged engages. Due to his education and his mother’s influence, he was fluent in French and Ojibwa in addition to his native English.

Bonga’s reputation attracted the attention of Lewis Cass, the Governor of the Territory of Michigan (present-day Michigan, Wisconsin, Iowa, Minnesota, and parts of North and South Dakota), who hired him as a guide during his 1820 expedition into the Great Lakes region of what is now northern Minnesota. The purpose of the expedition was to locate the source of the Mississippi River, which Cass erroneously determined was what was a body of water which was later dubbed ‘Cass Lake’ in his honour. Lewis Cass would later hire Bonga as a translator for treaty negotiations with the Ojibwa of Fond du Lac (Wisconsin), which resulted in the treaty of 1826.

In the winter of 1837, an Ojibwa man named Chegawaskung was arrested for the murder of fur trader Alfred Aitkin at Cass Lake. The native escaped from his cell and fled into the wilderness. George Bonga was tasked with his capture. For five days and six nights, the veteran voyageur tracked his quarry through the Minnesota wilds. Eventually, he caught up to the native, subdued him, and brought him to Fort Snelling (a U.S. Army fort situated at the confluence of the Minnesota and Mississippi Rivers) for trial. Although Chegawaskung was ultimately acquitted, Bonga’s hand in his arrest made him unpopular with the local Ojibwa.

In the 1840s, George Bonga left the fur trade. In the 1850s, he, his Ojibwa wife, and their four children built a lodge at Leech Lake, Minnesota, which they rented to outdoor sportsmen.

In later life, George Bonga became a great advocate for the ethical treatment of Native Americans. He wrote several letters to government officials in which he remonstrated the conduct of certain Indian Agents whom he believed treated their native charges unfairly.

George Bonga died in 1874 when he was about 72 years old. Reverend Henry Whipple, Minnesota’s first Episcopal bishop, wrote of the man:

“No word could be better trusted than that of George Bonga.”