Lake on the Mountain in Prince Edward County is an idyllic part of Ontario.

Rolling farmland, vineyards and apple orchards form a pleasant backdrop for one mysterious lake… the Lake on the Mountain.  The Lake on the Mountain is a just over one square kilometer in size, rises to 62 meters above the Bay of Quinte (Lake Ontario) and approximately 37 meters deep.  It drops of quick quickly from its shore and its origins are unknown at this time.  Also unknown is how the lake is fed and from where.  The Mohawk peoples called the lake Onokenoga, or Lake of the Gods, and believed that spirits dwelled within its deep waters.  Each spring they offered gifts to the spirits to ensure a successful crop in the coming year.  Early settlers believed the lake was bottomless and still others thought Lake on the Mountain led to a subterranean passage and distant water source. 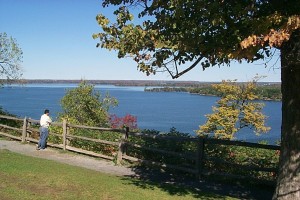 Lake on the Mountain and the community of Glenora at the base of the lake are also a play a large part in Ontario’s past.  Saw mills and grist mills produced flour, a major commodity from the lake region.  From 1796 until the early 1900′s the bay’s nice harbor facilities, the availability of water power supplied by the Lake on the Mountain, and access to major shipping lanes attracted other businesses including a turbine foundry. 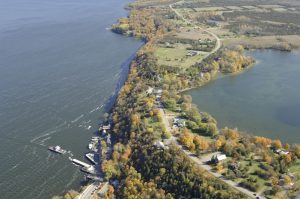