Many consider Ontario to be one of Canada’s most haunted provinces, and with good reason. The so-called “Province of Opportunity”, nestled in the heart of the Canadian Shield, has seen more violent death than just about any other region in the country.

The forests of pine, birch, and aspen that surround the Great Lakes have borne witness to centuries of bloody massacres and bitter battles. Iroquois warriors were wiping out rival tribes when New France was but a fantasy in the mind of Samuel de Champlain. Jesuit missionaries were tortured to death on the shores of Georgian Bay. Indian braves and European soldiers fell to the muskets, tomahawks, and war clubs of their enemies throughout the endless intercolonial wars that characterized the 17th and 18th Centuries. Lake Ontario resounded to the thunder of cannons during the Seven Years’ War, and the Niagara River ran red with the blood during the War of 1812. 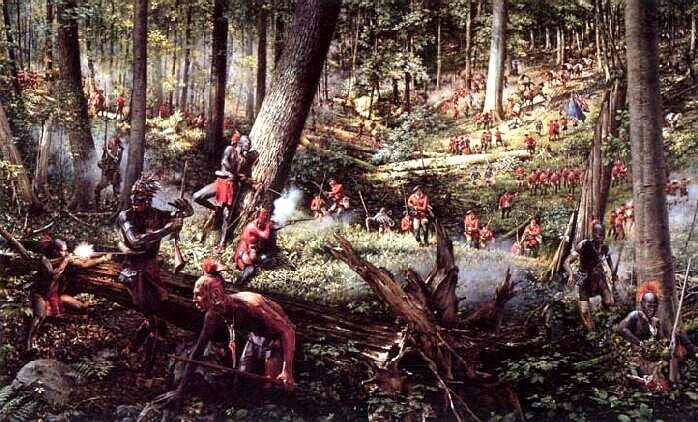 That the odd soul might linger in this blood-soaked land, keeping vigil over its earthly remains, ought to be no surprise to believers in the supernatural.

One of Ontario’s many ghost stories takes place near Collingwood, a sleepy old town at the southern end of Lake Huron’s Georgian Bay.

If you drive ten minutes west of Collingwood into the Blue Mountains, you’ll come to the Scenic Caves Nature Preserve. This beautiful natural area is dominated by towering cliffs, gloomy caves, and dark fissures that snake away into the rock. Centuries ago, the Petun Indians avoided this place, especially after dark, believing it to be haunted by ghosts and spirits.

One particular formation at Scenic Caves stands in conspicuous prominence. This rugged, 16-metre-tall limestone spire juts out from the rocky floor at the base of a cliff, forming a narrow gateway into an area which the Petun referred to as the “Village of the Dead”. Today, this geological anomaly has several different names, including “Standing Rock”, “Sacred Rock”, and “Worshipping Rock”. To the Petun Indians, however, it was “Ekarenniondi”- literally “Where the Rock Stands Out”.

The first white man to write about Petun beliefs regarding Ekarenniondi was Father Jean de Brebeuf, a French Jesuit missionary, Christian martyr, and Catholic saint who lived among the Huron in the early 1600’s. In his book Relation of what occurred in the Country of the Hurons in the year 1636, Brebeuf wrote a chapter on “The Ideas of the Huron Regarding the Nature of the Soul, both in this Life and after Death”. Brebeuf claimed that the Petun regarded Ekarenniondi as sacred. This rock, the Indians believed, served as the gateway to the Village of the Dead, to which Petun souls travelled in the afterlife.

Ekarenniondi was also the home of Oscotarach, the “Head Piercer”. This semi-divine entity, usually thought of as an ancient withered man, bored holes into the skulls of the dead who wished to enter the Village and sucked out their brains so that they would have no memory of the earthly life they left behind.

Oscotarach was not the only otherworldly entity to inhabit this damp, fern-shrouded vale in the Blue Mountains. Indian legend has it that a large bowl-like depression near Ekarenniondi once housed the nest of another semi-supernatural entity, a great blue Thunderbird.

In addition to the Thunderbird, the Head Piercer, and the Village of the Dead, the Scenic Caves Nature Reserve is the site of yet another spooky Petun legend.

Sometime before the arrival of French explorers, so the story goes, a young Erie Indian chief travelled from his homeland on the southern shores of Lake Erie to Nottawasaga Bay, a sub-section of Georgian Bay on which present-day Collingwood is situated. He hoped to broker an alliance between his people and the Petun tribe. 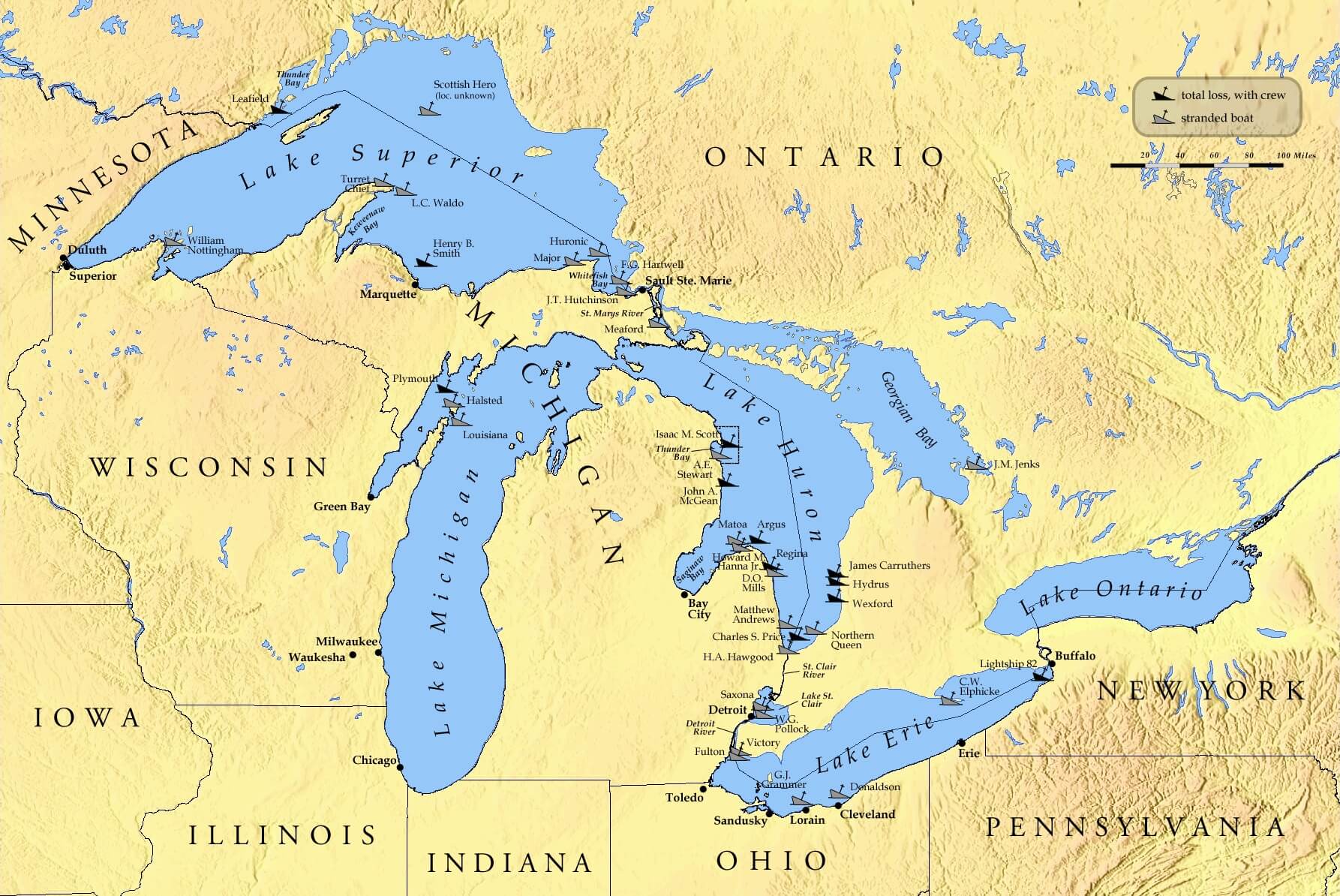 At that time, the Erie were at war with the Iroquois Confederacy, a powerful alliance from the forests beyond the St. Lawrence River. The Erie chief knew that his people required allies if they hoped to hold their own against the invaders from the south. He showered his Petun counterparts with gifts, but to no avail; the Petun firmly refused to ally themselves with the Erie. The chiefs from Nottawasaga Bay knew of the Iroquois Confederacy’s warlike reputation and had no desire to be dragged into a war they could not win.

During the course of the negotiations, the Erie chief fell in love with Leuantido, a beautiful daughter of a prominent Petun chief. When the visiting chief asked the girl’s father for Leuantido’s hand, the Petun leader refused him for the same reason he turned down his offer of alliance.

In spite of her father’s rejection, the Erie chief continued to meet Leuantido in secret. The couple often conducted their trysts in the sacred caves near Ekarenniondi, where few Petun dared to venture.

Eventually, Leuantido’s brothers found out about the illicit love affair. Enraged, they ambushed the Erie chief while he was on his way to another rendezvous with their sister. One of the Petun braves buried a tomahawk into the young chief’s skull atop the cliffs overlooking Ekarenniondi. A horrified Leuantido arrived just in time to see her brothers pitch her paramour’s lifeless body off the cliff.

The incident had a terrible effect on Leuantido’s mental state. The young woman grew increasingly despondent. One night, while weeping at the site of the young chief’s murder, she leapt off the cliff to her death. Her brothers found her shattered corpse the following morning, wrapped in her lover’s embrace. 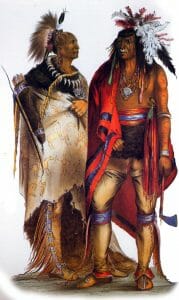 If the Petun and Erie had joined forces, perhaps they may have withstood the Iroquois offensives. Perhaps, some say, the tale of Leuantido and her lover was invented in the aftermath of the defeat of these two First Nations, serving as a parable illustrating the dangers of refusing to stand together against a powerful and aggressive enemy.

The Ghosts of the Scenic Caves Nature Preserve

As compelling as this theory may be, it conflicts with another tale surrounding the Scenic Caves Nature Preserve. Legend has it that the ill-fated romance of Leuantido and the Erie chief is based on a real event, and that Ekarenniondi is haunted by the ghosts of two star-crossed Indian lovers, united in death. Some say that faint, mournful cries occasionally issue from the base of the cliff. Others claim that the dim figure of two lovers, arm in arm, sometimes appears near Ekarenniondi, only to vanish when approached.

According to an article in a 2005 issue of the magazine Mysteries, two friends named Shera and Bruce may have encountered the ghostly couple during a visit to the Scenic Caves Nature Preserve one misty fall day sometime in the late 1970’s. According to Shera:

“My friend and I were separated. We were… exploring the area, taking photos. As I walked around the rocks, there was suddenly a really intense feeling, one that I’ve only had a few times in my life. It’s that voice in your head that says ‘get the heck out of here’.”

Heeding her instincts, Shera looked about for Bruce. With a thrill of panic, she realized that her companion was nowhere in sight. She hastily fled the area, whereupon she found Bruce sitting on a boulder, pale and shivering.

When he found his voice, Bruce explained that he had seen a brilliantly-coloured leaf floating in a puddle of rainwater and crouched down to take a photo of it. Suddenly, he noticed the image of a beautiful Indian woman shimmering on the water’s surface. It was a reflection; the woman was behind him, standing over him. Bruce even felt the woman’s long black hair brush against his ear.

Startled, he turned around, only to find that he was alone. Yet the feeling of the hair brushing against his ear remained. When Bruce tried to brush the phantom hair away, a large maggot fell to the ground.

Today, the Scenic Caves Nature Preserve closes before sunset. If the Head Piercer or the spectral inhabitants of the Village of the Dead come out at night to perform their ghostly errands, they do so in privacy. Perhaps, as Canadian writers Andrew Hind and Maria da Silva put it, “the park closes at dusk to provide Leuantido and her beloved the intimacy the craved but were cruelly denied in life.”

If you enjoyed this article and would like to support this website, please check out our bookstore: