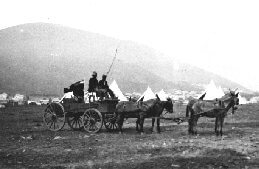 On 5 July 1900 at Wolwespruit, Standerton, South Africa, a party of 38 Lord Strathcona’s Horse came into contact and was engaged at close quarters with a force of 80 of the enemy. When the order was given to retire Sergeant Richardson rode back under very heavy cross-fire to save a comrade. Cpl McArthur was wounded and fell from his horse. Sgt Richardson, seeing that the man was in danger of being taken prisoner, retrieved him, threw him across his saddle, and rode off under a hail of Boer fire. Richardson’s clothing was pierced by several bullets and his horse was so exhausted that it died soon after he reached friendly lines.

Richardson died in 1932 and was buried in St. James’s Cemetery, Liverpool, UK.   The cemetery is now a park where a monument to Richardson was erected in 1994.