Let’s talk  about Lady Astor of Britain and the United States.  Nancy, as she was never called to her face, was born Nancy Witcher Langhorne on May 19, 1879, in Danville, Virginia.  Her father was a wealthy businessman whose business depended on slave labor.  When the American Civil War began his business withered and died.  When Nancy was born the family was poor.  That did not last long however as dear old dad became an auctioneer and a railroad person and built back his fortune.  Nancy lived a charmed life.  After a brief marriage to Robert Shaw, she moved to England where she became a respected, if slightly arrogant and puritanical, socialite.  Her second marriage was to Waldorf Astor, an American-born lad who came to Britain when Astor was twelve years old.  When Astor’s father died, Waldorf became the Viscount Astor and Nancy became Lady Astor.

I am not going to tell you the full story of Lady Astor.  Let’s just say that she became a Member of Parliament and a critic of all things not to her liking.  She had a tendency to speak stupid thoughts without a care over who she hurt or slandered.  By the time WWII had rolled around Astor’s mouth had won her the respect of very few.  In fact she was considered a bit of a joke by her peers.  She was oft-times referred to as “The Right Honorable Member from Berlin”, for her defence of Hitler. Her speeches became incomprehensible to most and it was stated that debating her had become “like playing squash with a dish of scrambled eggs”.

That brings us to the reason for this story.  The D-Day landings at Normandy took place in June of 1944.  It was not a happy time or place.  The fighting was hard and the human costs were high.  Canadians took one of the lead positions in the fighting.  But Normandy was not the only front upon which the Canadians fought and died.   In July of 1943, Canadians, Americans and many other soldiers landed on the island of Sicily and began a campaign to push the German army up and right out of Italy.  The fighting was fierce as is attested to by the number of Allied graves, 542 of them are Canadians, throughout Italy.

As the death toll in the Italian campaign mounted, what did MP Lady Astor have to say about it?  She referred to the Italian-campaign soldiers as “D-Day Dodgers”.  She had received a letter from a disillusioned British soldier who apparently thought that he was not part of the war effort.  (I wonder what happened to the guy?)  He signed his letter D-Day Dodger.  Not bothering to find out what the term meant, Astor started to refer to soldiers in the Italian campaign as “D-Day Dodgers.”

The term D-Day was as common term during the war to denote when a battle was to commence.  As the soldiers in the Italian campaign would say, “We were in many D-Days before Normandy.”

But how did the troops react to Astor’s slur?  They wrote a song.  Hamish Henderson, a poet and army captain from Edinburgh, wrote the original.  Many versions exist, depending on what battles you fought.  The Canadian version of the song goes like this (sung to the tune of Lili Marlene):

On our way to Florence we had a lovely time.
We ran a bus to Rimini right through the Gothic Line.
On to Bologna we did go.
Then we went bathing in the Po.
For we are the D-Day Dodgers, over here in Italy.

Once we had a blue light that we were going home
Back to dear old Canada, never more to roam.
Then somebody said in France you’ll fight.
We said never mind, we’ll just sit tight,
The windy D-Day Dodgers, out in Sunny Italy.

Now Lady Astor, get a load of this.
Don’t stand up on a platform and talk a load of piss.
You’re the nation’s sweetheart, the nation’s pride
But we think your bloody big mouth is far too wide.
For we are the D-Day Dodgers, out in Sunny Italy.

When you look ’round the mountains, through the mud and rain
You’ll find the scattered crosses, some which bear no name.
Heartbreak, and toil and suffering gone
The boys beneath them slumber on
They were the D-Day Dodgers, who’ll stay in Italy.

So listen all you people, over land and foam
Even though we’ve parted, our hearts are close to home.
When we return we hope you’ll say
“You did your little bit, though far away
All of the D-Day Dodgers, way out there in Italy.” 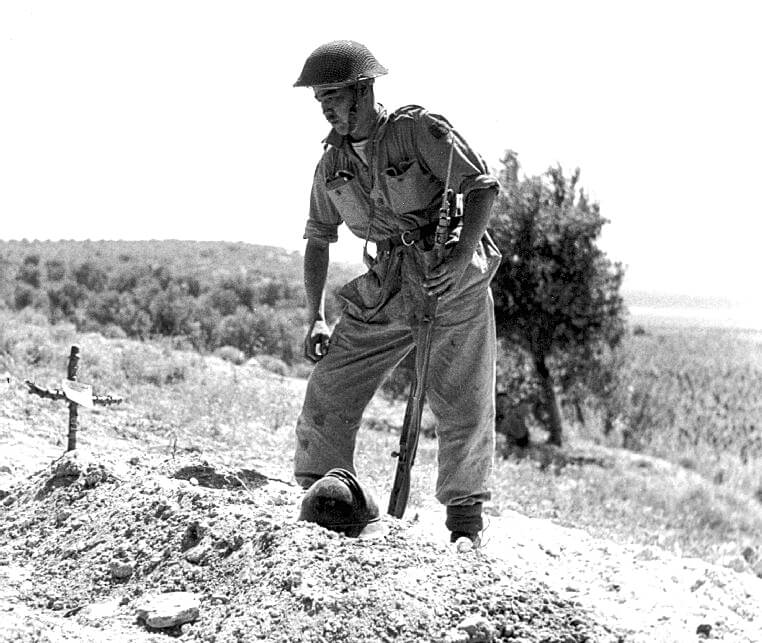 Poet Hamish Henderson was fluent in German and Italian, in addition to his native tongue. This proved very useful during the Italian campaign.  Henderson’s role was to interrogate German and Italian POWs and it was to him that the Germans surrendered Italy on April 19, 1945.

Two of the D-Day Dodgers were Smokey Smith, VC and George Ricketts.  Smith was hit by shrapnel and was close to death while in Italy.  He recovered and went on to be awarded the Victoria Cross following the other D-Day in France.   George Ricketts, my father, was a wireless operator with the RCCS.  This D-Day Dodger literally walked from Sicily to Holland with the army.  Both Smokey and George have since died.  Too bad the cannot tell us what they thought of Lady Astor.