Joe Bouzek is an interesting guy.  He came to Canada, at the age of 13, from England, with his family in 1928 and settled in the great metropolis of Stewart, BC.  At that time Stewart had a population of about 1,000 and no roads leading into it.  The only way in was by boat up the Portland Canal. Stewart was a stopping off point for all the Gold Rushes into the interior of BC.  Klondike Kate lived here shortly before her death.  But Stewart was not just a stop-off point.  It had been the home of some of the most lucrative gold mines in all of Canada. Joe grew up to be a newspaper man and a self taught electronics wiz.  He is now retired and living in Ottawa with his wife of almost 60 years, Helen.  One of Helen’s relatives was the Master on the HMS Nancy. 1940 was a pivotal year in the life of Joe Bouzek.  It was the time of World War II.  The Nazis had conquered most of Europe and had their eyes set on conquering Britain.  This was the year of the Battle of Britain.

One of the pivotal advantages that Britain had in defending itself was a fairly new invention called RADAR. We all know (or should know) that the Battle of Britain was won by pilots from many countries, including 90 from Canada (20 of whom died), fighting against overwhelming odds.  But a positive outcome was not always ensured.  The British War Office decided that RADAR was a crucial technology that must not fall into the hands of the Germans if the battle was lost.  Therefore they decided to train Canadian technicians to maintain the systems.  If that battle did turn against Britain at least the “secrets” of RADAR would be safe in Canada.

Joe Bouzek was one of these technicians.

Joe was seconded (although not officially) to the RAF as a RADAR trainer and remained in the UK until 1943.  As if his life wasn’t interesting enough, even his return to Canada, onboard the HMS Queen Mary was eventful.  As a senior NCO on the ship he was assigned to supervise the watch.  One evening as he did his rounds below decks he spotted a figure coming towards him smoking a cigar.  He could not make out the smoker’s face because of the lighting but he could see the cigar glowing.  He yelled to the smoker to put out the cigar, “It is against regulations and it is dangerous.”.  The smoker stopped, dropped the cigar on the floor, crushed it and then bent over to pick it up and put it in his pocket.  “I am sorry”, stated the smoker, “I was just in thought”.  Then, Winston Churchill tipped his hat to Joe and continued his voyage to the Quebec Conference where he met with Stalin, King and Roosevelt.

Once back in Canada, Sgt Joe Bouzek was sent to the US to study new High Frequency RADAR technology.  While on duty in the US he learned of a new technology that was going to revolutionize the science of bombing.  The Americans were planning to put a television camera in the nose of a remotely controllable bomb.  Some people will tell you that this TV technology was used to control the Hiroshima and Nagasaki bombs.  As a side note: The first official television broadcast in Canada was in 1951, it had been in use commercially in the US since 1928.

On his return from the US to Canada and his base at Clinton, Ontario, Joe talked over the technology with his Commanding Officer, Wing Commander Kenneth R. Patrick.  Patrick, who would later be installed as a Member of the Order of the British Empire (OBE) for his contribution field of communications and radar, worked with his US counterpart at Clinton to secure one of the American setups.  Joe was put in charge of what could be called a Black Operation to demonstrate the use of the technology in Canada.

Joe and his team began by installing the television camera unit in a truck and driving it around Clinton and transmitting the images to their office on the base.  On December 13, 1944 they left Clinton to drive into Toronto.  That was a few days after one of the worst blizzards to ever hit Toronto.  During this storm some twenty-four people died as a result of 57 cm of snow being blown into drifts by gale force winds!  Driving conditions were poor, a factor that was to prove providential for Joe and his team.

The demonstration they had planned for December 14 was to drive their specially equipped truck from the Royal York Hotel to the Island Airport.  The signal receiver was installed at the military staff college one block north of the Royal York.  The demonstration went off without a hitch.  There were probably two main reasons why the demonstration was successful.  Traffic was light due to the snow storm and also that Joe sat next to the driver during the entire trip.  Why, you may ask, was Joe sitting next to the driver important?  Well, you see, the driver was blindfolded and was being directed by Joe who was watching the TV screen!

The camera was alternately installed in the nose of an AVRO ANSON V light attack bomber.  It was by this plane that the Peace Tower of the Parliament of Canada came “under attack”.

For those who do not know, in 1943, 617 Squadron attacked a number of dams on the Ruhr River in Germany using skipping bombs dropped from incredibly low altitudes. Seems that this low flying skill was advantageous for the “flying bomb” project.

In their first flying operation, the plane flew at a scant few  feet above the ground and “targeted” the drill hall at Clinton Air Base.  The occupants of the drill hall stared in horror at the plane screaming towards them.  Good fun and great science! 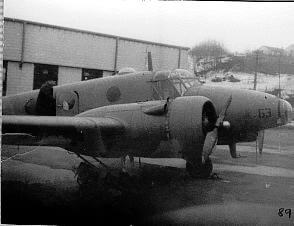 In Halifax they took off from Greenwood Air Base, dived to the deck over the Halifax Harbor and “targeted” the big red cross on a moored hospital ship.
But the “piece de resistance” came on March 17 when the Anson departed Ottawa’s Uplands Air Base and flew at less than 200 feet right up the middle of Metcalfe Street in Ottawa with a bead on the clock of the Peace Tower of the Parliament Buildings.  The roar of the low flying bomber must have wakened the Parliamentarians because they contacted the Defence Department, then on Elgin Street, to complain about the noise.  The Anson was contacted to stop the demonstration but the order came too late, the plane was already on its second pass.  They broke off the flight within a couple of hundred metres of the Parliament Building and flew to the area of Britannia Beach in the west end of Ottawa.  From there they made their last “attack” of the day, targeting the Alexandria Bridge near the downtown core.

By the end of the war the project led by SGT. Joe Bouzek was terminated.  All that remains of the “flying bomb” project are Joe Bouzek’s memories, some fading photographs and, of course, this story at Mysteries of Canada.