Prior to 1912, the grain growers of western Canada were strapped by geography and transportation.  Being that they were, for the most part, located in central western Canada (Manitoba, Saskatchewan and Alberta), they had no economical way to move their crop to market.  They were captive to the middlemen – the elevator companies who bought and prepared the grain for shipment, the railways who moved the grain to export ports and Winnipeg Grain Exchange who set the quality standards and price that was to be paid to the farmers.  Everyone had a piece of the pie but the smallest piece when to the farmers.The First World War was a watershed for the grain industry.  The Canadian government, during this time of war, establish the Board of Grain Supervisors (BGS) for the crop years of  1917 and 1918.  After the war the BGS became the Canadian Wheat Board (CWB).  The CWB’s mandate was to sell the producers’ grain, in the domestic and export markets, at world prices.  The major value of the CWB over any other marketing program was that the CWB guaranteed the base selling price of the crop to the farmers.  In other words, if the selling price of the crop went up from the base established by the CWB the farmers would receive more money.  But if the price dropped as it did in 1929, the government would absorb the losses.For most of its history the CWB sold grain products through private enterprise agents but in the 1960’s they began to deal directly with buyers.

The representation of producers on the Board of Directors has grown from almost none to the current program wherein ten of the fifteen members are elected by growers.  The CEO and the other five members are appointed by the government.

With this brief history (you can find more details at http://www.cwb.ca/ in place let’s try to understand what all this means in 2007 terms.

First the grain growers, the farmers, of western Canada get guaranteed prices and payments for their crops.  They also have the majority of seats on the Board of Directors of the CWB, who guarantees their payments.  The existence and mandate of the CWB means that individual farmers do not have to compete against the big foreign consortiums and companies that market grain around the world.  Guaranteed prices, payments and reduced risk.  Sounds like a good deal – no?

In the mid 1990’s, the CWB was besieged with complaints and law suits over what was perceived as unfair business practices by everyone from corporate interests in Europe and the US to the Reform Party (later to become the Canadian Alliance Party, then the CRAPP, then the New Conservative Party, then Canada’s New Government, then just plain Boring) here in Canada.    Even though the CWB was majority farmer controlled, the American corporation launched 14 separate actions in 1997 alleging that the CWB is an unfair trader.  Trade tribunals ruled in the Board’s favour every time.

In 1997, with their new leader, Steven Harper, the National Citizens Coalition described the CWB as a “draconian wheat monopoly that for years has relied on force and fear to exist.”  The NCC tried, through third party attack ads on the CWB, to affect the elections of Directors.  They failed and the Board was formed by a majority vote in favor of the Boards mandate.

That did not stop Mr. Harper though.  His could be described as a quest to destroy the CWB regardless of the will of the farmers.  In 2007, Canada’s New Government, with Harper as PM, decreed that the CWB will no longer sell barley on behalf of, primarily, Alberta farmers and that the “monopoly” of the CWB to sell Canadian wheat abroad will be curtailed.  The losers in this deal are the producers who are 90%  against the deal.  The winners?  Listened to the words of the former president of the National Association of Wheat Growers, an American group:

“US wheat would be more competitive in markets such as Asia, the Middle East and Central America, where the two countries go head to head.” 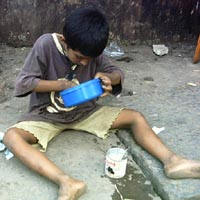 The value to the Canadian farmers is that the Americans and Europeans can be more competitive to the Canadians.  Sound about right?  That will drive up the world price for wheat and other grains to including third world countries who are starving to death.

But I wonder how long that will last.  In an open market, Canadian farmers will sell their grain to whomever will buy it.  The name Cargill, a giant American elevator and marketing company, comes to mind.  What will happen when Canadian grain floods the US market.  Grain prices will drop and the US growers will blame it on Canadians.  They will try to cut off the American market to the Canadian growers who will then have to turn to Cargill to market their grain.  Does the term “hostage taking” ring a familiar note?  In the early 1900’s, before the creation of the CWB (and it predecessor the BGS), western farmers felt that a gun was being held to their heads by the elevator companies and the railways.  Here we are less than one hundred years later and it’s happening all over again.

There is a battle brewing over the CWB issue.  The Friends of the Canadian Wheat Board are preparing to do battle with their own government on behalf of the majority of farmers that are affected by the callous nature of Canada’s New Government.  For more information on this subject check out: www.theholmteam.ca/CWB.html

So what’s next for Canada’s New Government in their quest to dismantle supply side management.  Want to bet they won’t go after the Milk Marketing Board or the Canadian Dairy Commission?  Why not?  They do the same job as the CWB.  But there are centred primarily in Quebec.

UPDATE:   This press release was issued by the National Farm Union on August 3, 2007

“Farmers went to court to protect our right to collectively, democratically, and properly determine how we market grain. We won,” said NFU President Stewart Wells, one of the 12 Applicants that brought the case to the Federal Court.

“The judge ruled that the government of Canada — whether Conservative, Liberal, NDP, or another party — must follow the law. The law dictates clear procedures for changing the CWB’s mandate: a fair plebiscite on a clear question, good-faith consultation with CWB Directors, and legislation democratically passed in the House of Commons by elected MPs. This law is there to ensure that farmers maintain democratic control over their marketing agency.”

Democracy prevails but is the story over????