I am not a fan of the Communist political system. But I also admit that I not a dedicated fan of the philosophy of Capitalism either. Communism in Canada is a late 19th and early 20th century thing.  That is not to say that Communists do not still offer up their ideas in Canada today, they are just not as influential as in the early part of the 20th century. Why, you may ask, were they influential in the early 20th century.  Welcome to the Depression Era of Canada.

Most people will tell you that the Depression started in Canada on October 29, 1929 when the stock market collapsed under a credit crunch.  A day known now as Black Tuesday.  However there was no one event which precipitated this unprecedented period of squalor, unemployment and untold hardship which lasted for a full decade.

During this decade, men were forced into concentration camps (referred to by governments as “Relief Camps”) where they worked for starvation wages doing meaningless labour in conditions that would get you a call from the Humane Society if you treated a dog the same way.  It was a decade when the sight of a policeman beating a man or woman with a night stick would be commonplace.  It was a time when, if you had no money because you had no job or job prospect, you were in contravention of the Criminal Code – you were a vagrant.  It was also a time when the governments, federal, provincial and municipal, abrogated their responsibilities to Canadians by not leading with compassion but rather reacting with malice.

Capitalism was breaking down and into that vacuum stepped Tim Buck, Canada’s Little Commie.

Tim Buck was born in 1891 in Beccles, England.  He was described in Pierre Burton’s book on the Depression as, “short, wiry, quiet spoken, clean shaven and well read.”  “(He)… looked more like a shoe salesman than the cartoon stereotype of a bearded, bomb-throwing Bolshevik.”

He was working as a machinist’s apprentice when he learned about and became a devout socialist.  In 1910 he emigrated to Canada because the steamship fare was cheaper to here than to Australia.

In 1921, following a career of as a strong and activist union member, he helped for the Communist Party of Canada (CPC), which he would lead from 1930 until he died in 1973.

I love democracy at work!

Something had to be done to help the millions who were suffering.

The CPC offered a simple program: the establishment of non-contributory state run unemployment insurance; a seven hour work day; and a national minimum wage of $25 a week. Petitions in support of these proposals were widely circulated.

In June 1931, five members of Montreal’s CPC were sentenced to a year of hard labour following their conviction on a charge of sedition. They were guilty of having urged 300 unemployed workers to organize and demand that the authorities relieve their hardship. The meeting was broken up by 150 police.

Two months later, on August 11, 1931, the Communist Party’s offices in Toronto were raided; Buck and seven colleagues were arrested. Although Buck and the CPC had been operating in the open for years, they were now seen as a threat that needed to be suppressed.

The trial took place in November 1931. The crown’s chief witness was John Leopold, a five foot tall RCMP officer, who’d been an undercover member of the CPC from 1921 to 1928, when he’d been expelled. Leopold testified that the Communists planned the overthrow of the existing order through the use of force.  Buck argued that there had never been any violence as a result of the activities of the CPC. Whatever violence there had been had been instigated by the authorities. In a closing three-hour speech in his defense he said, “When we are charged with teaching or advocating force or violence, we point out that if the workers are learning anything about ‘force or violence’ these days, they are not learning from us. We do not consider it necessary to teach or advocate the use of ‘force or violence.’ We do not believe that governments, systems of society, or states are overthrown by a conspiracy — but rather by undeniable forces.”

Buck and his companions were found guilty of a “crime” and sentenced to hard labour at Kingston Penitentiary.

In 1932, a few months after Buck was incarcerated, a riot broke out at the Penitentiary.  Buck was not involved and he did not budge from his cell during the riot.  While he sat and listened to the maelstrom that ensued outside, eight shots rang out and eight bullets entered his cell via the window and barely missed Buck.   Was it collateral fire or was Buck being targeted?

The authorities denied targeting Buck but I wonder…?

In fact, in late 1933 an embarrassed Hugh Guthrie, Minister of Justice, admitted in the House of Commons that shots had in fact been fired into Buck’s cell — but just “to frighten him.”

In 1934 Buck was freed from prison and took up his leadership of the CPC.

From 1929 to 1939, Canada was in the grips of the Depression.  Over 3.5 million people were unemployed.  Hundreds of thousands of people moved about the country by riding the rails.  Hundreds of thousands more worked for peanuts in the Relief Camps.  Farmers lost everything including their homes and farms when a drought which began in 1928 deepened and no rain fell on the farms of southern Canada for almost 11 years. 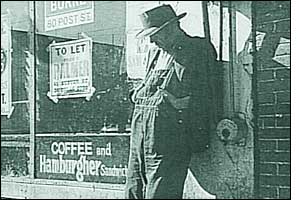 Canadians needed leadership and its governments offered them nothing.

The leadership vacuum was filled by people like Tim Buck and the CPC.  Other organizations that were spawned during this time were: the CCF party which later became the New Democratic Party; and the Social Credit governments of Aberhart and Manning which ruled Alberta for 36 years.

Tim Buck was a pivotal person in the history of Canada.  During the Depression of the 1930’s he saw injustice and tried to address it with his communist ideals.  The governments at the time saw Buck as a subversive and, in their fear, tried to undermine his efforts.

Who is to say that Buck was wrong.

I urge readers of Mysteries of Canada to read more about Tim Buck and the stories of the Depression Years.