If stones could speak, the bedrock of the Ottawa River in Ottawa, Ontario, would never stop talking. Throughout the years, the river that runs through the capital of Canada has borne all manner of watercraft, from the birch-bark canoes of Algonquin hunters to the iron-hulled steamboats of the Union Forwarding & Railway Company. As the river has seen countless tons of freshwater flow from its source in the Laurentian Mountains into the great St. Lawrence, it has witnessed a scrap of land on its shores rise from an obscure stretch of forest to the capital of Canada.

Long before the first white man stepped foot in Canada, the Ottawa Valley was home to Canada’s Algonquin First Nations. Primarily hunters and fishermen, these semi-nomadic people spent their summers in small seasonal villages. They often traveled up and down the Ottawa River in slender birch-bark canoes to trade with one another. In the fall and winter, they left their wigwams and scattered into smaller groups to follow the wild game.

In 1610, a young adventurer named Etienne Brule, under the guidance of French explorer Samuel de Champlain, went to live among the Huron people of Georgian Bay. He hoped to master their language and learn about their territory. On his journey, he became the first European to travel up the Ottawa River and see the site of the present-day capital of Canada. In the years to come, many young Frenchmen followed Brule’s example and took to the woods to live with the natives. These frontiersmen independents who fomented the North American fur trade became known collectively as the coureurs des bois. From the early 1600’s to the early 1800’s, they, along with indentured voyageurs, traveled up the Ottawa River and deep into the wilderness to trade French goods for Indian furs.

In the mid 17th century, war broke out between French/Algonquin/Huron and Iroquois forces. Several skirmishes were fought along the shores of the Ottawa River. In the spring of 1649, twelve hundred Iroquois warriors armed with Dutch firearms traveled up the Ottawa River and west into Huron territory. There, they massacred the Huron (along with several Jesuit missionaries) and drove the survivors north.

In the early 1800’s, the British Empire went to war with Napoleon’s France. The British Royal Navy, short on ships, turned to the Ottawa Valley for quality timber. In no time, a small logging village called Wrightsville (named after founder Philemon Wright) sprouted on the river’s shore. Huge timber rafts were assembled and floated down the river into the St. Lawrence and to Quebec City.

In the wake of the War of 1812, the British government feared an American invasion. In the event that American forces took the southern section of the St. Lawrence River, the important route between Montreal and Kingston would be severed. As a precaution, the British planned to build a waterway linking the Ottawa River with Kingston. Lieutenant-Colonel John By, a British Royal Engineer, was tasked with the canal’s construction. He chose a place for the canal’s entrance near Wrightsville and founded a town on the spot. The town, named Bytown after its founder, would one day become Ottawa, the capital of Canada. 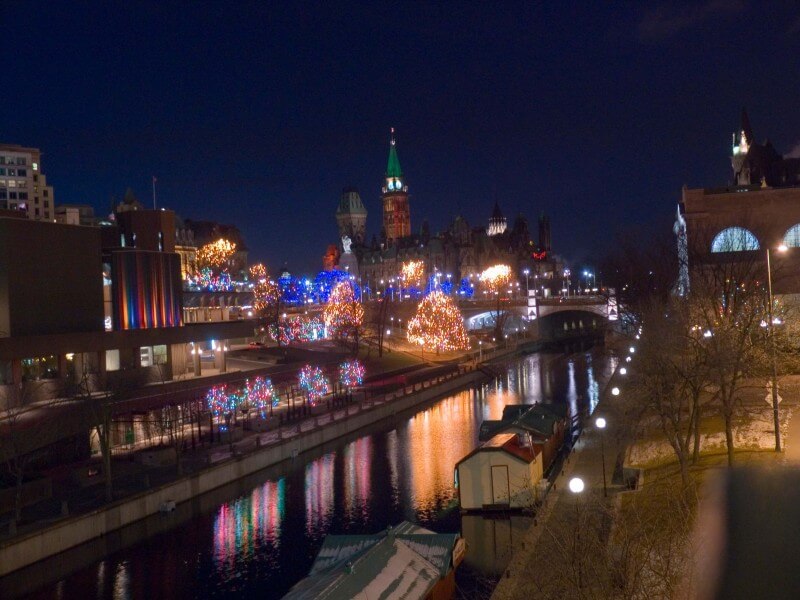 Construction of the canal commenced in 1826. After six years, 822,000 pounds stirling, and nearly a thousand dead workers, the canal was completed. The waterway, called the Rideau Canal, was 202 km long and included sections of various rivers and lakes. Since the project was over budget, John By was retired without praise and recalled to London. According to local lore, his spirit may have returned to haunt Ottawa’s very creepy Bytown Museum.  That’s a story for another time.

On New Years Day, 1855, Bytown was incorporated as a city and renamed Ottawa. Nearly three years later, on New Years Eve, 1857, Queen Victoria was asked to select a capital for the British Province of Canada. On the advice of John A. Macdonald, she chose Ottawa as the Capital of Canada.