AFTER SEEING EVERYTHING clear at the crossing, and the Indians beginning to move off, I returned to Calgary with F troop. The usual amount of work had to be done during the winter, and a good many trips made to the Indian camps. A continual watch on parties trading among them was kept, but the winter altogether was a pleasant one. H. Taylor, who erected a billiard room, near Baker’s store, held several dances during the winter, and jolly affairs they were. We celebrated the anniversary of our arrival at Fort Macleod by a big dinner, and dance in the mess room afterwards, to which all civilians near us, and many from Morleyville, were invited.

The shooting was good up the Bow river, deer and grouse being plentiful, and a welcome addition to our bill of fare, as buffalo meat was still our chief article of diet.

At Fort Macleod all went on quietly that winter, with Captain Winder in command, Fort Walsh being then made the head quarters of the force, with Colonel Irvine, the assistant commissioner, in command.

General Terry had been met on the line the previous fall by Colonel Macleod and escort, and conducted to Fort Walsh, where many counsels were held with Sitting Bull and his chiefs. These Indians showed great dislike for the American officers, refusing even to shake hands with them, and they positively refused to return to the States, although strongly pressed by both Americans and police to do so. It was an anxious time while these officers remained, as the Sioux were many thousands strong, and bitterly hostile to the Americans, but great judgement was shown, and all went off well, the American party returning under our escort to the States, without accomplishing the object they came for.

This large number of Sioux Indians was a source of great anxiety to the Canadian government, and also to us, upon whom the burden fell most heavily. They were hostile to all Indians in the country, whose old enemies they were, and our Indians were much dissatisfied and uneasy at their presence. They killed enormous numbers of buffalo, which at that time began to show signs of depletion. When the animals migrated south there was this large band if Sioux along the line, and they only returned in greatly diminished numbers each year, until they failed to return at all but in very small bands. The Sioux were distinctly told by the authorities that they would receive no help whatever from the Canadian government, and would have to respect the laws as long as they remained. They moved this winter from Fort Walsh to Wood mountain, some two hundred miles east, and near the American line. Continual journeys had to be made during the winter of 1877 to that point, to watch their movements, and it was necessary to build a small post there the following year. A number of men, with an officer, were stationed there as long as the Sioux remained.

The journey from Fort Walsh to Wood mountain was about the hardest in winter of any we had to make, the country being bleak and desolate with no wood for hundreds of miles. Journeys also had to be made between Fort Walsh and Fort Macleod through a country also without a stick of wood, and generally through deep snow. The mail was carried every three weeks between these points. It can, therefore, be seen that the small force of not much over 200 men in the west were kept continually on the move, and had to suffer the greatest hardships to carry out the duties assigned them, but this was always cheerfully and well done, as was proved by the suppression of the whisky trade, and by the manner in which peace was kept between the different tribes of Indians scattered over a vast area of country.

Our mail communication was at long intervals, as a monthly mail in the winter was all we received, the mail coming from the nearest railroad- the Union Pacific- at a place named Corin about 300 miles south of Helena, Mont., and at least 500 miles from Fort Macleod. In the summer the mail journey was not so long, as the mail came up the Missouri river by another steamer to Fort Benton, and so on to Fort Macleod, from which place all mail for Calgary or Fort Walsh had to be forwarded. In the north at Edmonton or at Fort Saskatchewan, the police post built in 1876 near Edmonton, they were not so badly off, their mail being carried direct from Winnipeg along the Saskatchewan river, there being several Hudson’s Bay Company posts on the road to stop at.

The troop at Edmonton did not have the work to do that was imperative in the south, as the Crees and halfbreeds with whom they had principally to deal, were peaceable and fairly law abiding. They had, however, plenty of work, and did it well. It was also only at long intervals that they received communication from the headquarters of the force at Fort Walsh, and nearly all matters pertaining to police work had to be left to the discretion of Lieutenant-Colonel Jarvis, the officer commanding. B. Hardisty, the Hudson’s Bay Company’s chief factor at Edmonton, gave them every assistance, and his knowledge of the country and the Indians was of the greatest possible service to them.

The settlement at Fort Macleod had increased in numbers, and a few more small stores had been built, but no actual settlers had come in, and no cattle had arrived, buffalo being the only meat procurable. 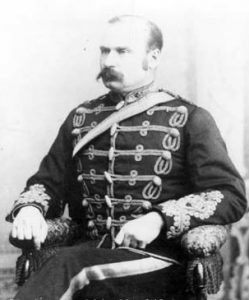 In the spring of 1878 Mr. Crozier returned from Fort Walsh, and remained a short time at Calgary. He was accompanied by Captain Williams, an American officer who had arrived at Fort Macleod from the American military post at Fort Shaw, in Montana, to recover some mules, the property of the United States army, taken by deserters from that place. He recovered these at Macleod, and took a short trip to Calgary with Major Crozier for a holiday. Captain Williams and I visited the Methodist mission at Morleyville, and were hospitably treated by the Rev. John McDougall. We spent a few days in the mountains at Devil’s lake, hunting and fishing, killing many deer, and catching more fish than we knew what to do with.

Major Crozier remained the first part of that summer at Calgary, but was ordered during the latter part to take down half of F troop to Fort Walsh. I remained behind for a short time with the rest, leaving Calgary about midsummer with all the remainder of the troop except ten men and a sergeant, who were left in charge at Calgary. We journeyed from Macleod to Fort Walsh, where I remained until the fall. While at Fort Walsh, it was a continual series of journeys to different Indian camps, and it took us all our time to keep the different tribes from coming into collision. Mr. Dewdney had been appointed Indian commissioner that year, and visited Fort Macleod and the different Indian camps. The Indians were finding it more difficult to obtain buffalo, as they had begun to diminish in numbers, and the hunting parties had to go far out on the plains after them, making our journeys much longer and more arduous. 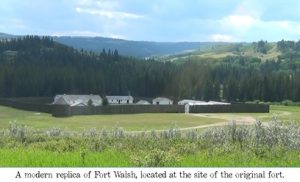 Fort Walsh had become a small village with two or three stores, and a few smaller settlers living there, but it was an unhealthy place, being built in a deep valley about the middle of the Cypress hills. Fevers were very prevalent, and several men and one officer died from typhoid fever while the police remained there. It was a fort very much disliked by both officers and men, but had to be kept up, being a most important point particularly while the Sioux remained in the country. I was sent to Fort Macleod about August, 1878, to see the different tribes of Indians in treaty No. 7, and to set the time of their annual payments. The Bloods and Piegans were paid at Fort Kipp, about 18 miles below Fort Macleod, and the Blackfeet and Sarcees at the Blackfoot crossing, while the Stonies were to be paid at their reservation at Morleyville.

I had to inform Crowfoot, the head chief of the Blackfeet, that the Bloods would have a separate reservation given them in the south. This I did not look forward to with pleasure, as it was known that Crowfoot, whose word with the Blackfeet was law, was much against the Bloods and the Blackfeet separating, thereby curtailing the reservation at the Blackfoot crossing. Crowfoot was one of the most obstinate Indians to deal with that I ever came across. However, it had to be done, and after notifying the Bloods and Piegans, who were at that time camped near Macleod in expectation of the payments, that they would be paid at Fort Kipp on a certain date, and notifying the commissioner at Fort Walsh of this arrangement, I proceeded across the country to the Blackfoot crossing, where the Blackfeet were then encamped.