The following is an article which I originally published on my own website in 2014. 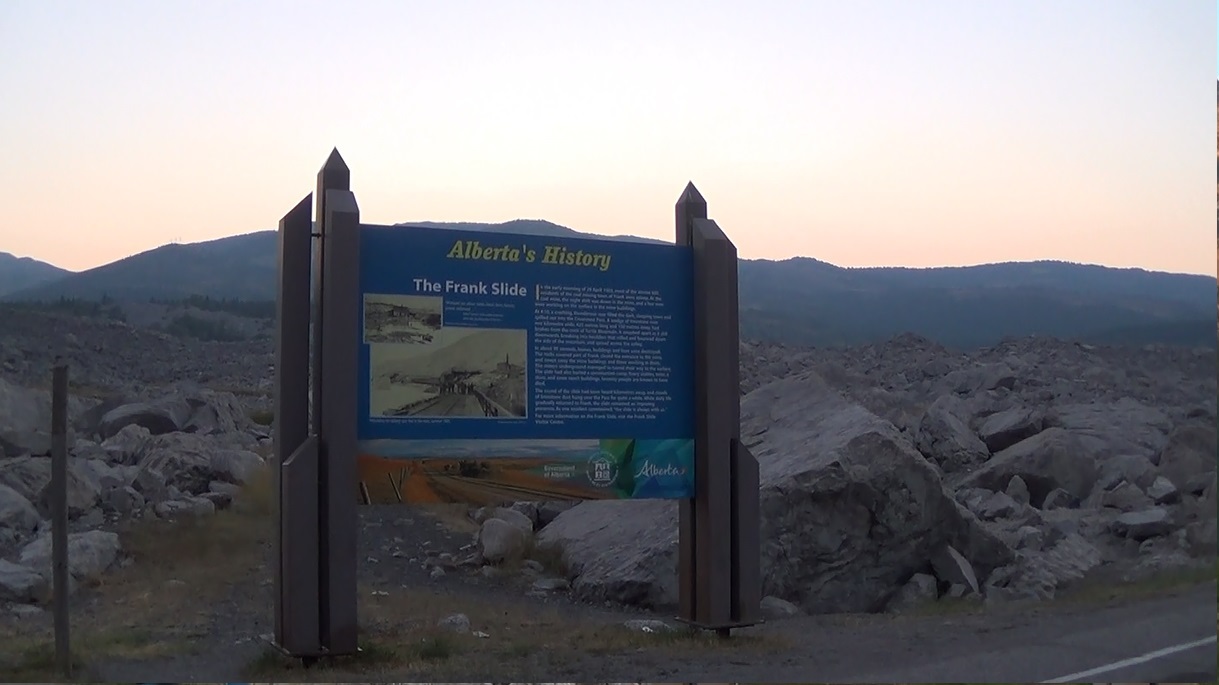 If you’ve ever driven through the Municipality of the Crowsnest Pass on the #3 Alberta Crowsnest Highway, chance are you’ll recall seeing a huge field of rubble on the east side of the road which appears to have fallen from the mountain on the left.  This is the site of the Frank Slide of 1903, the deadliest landslide in Canadian history. 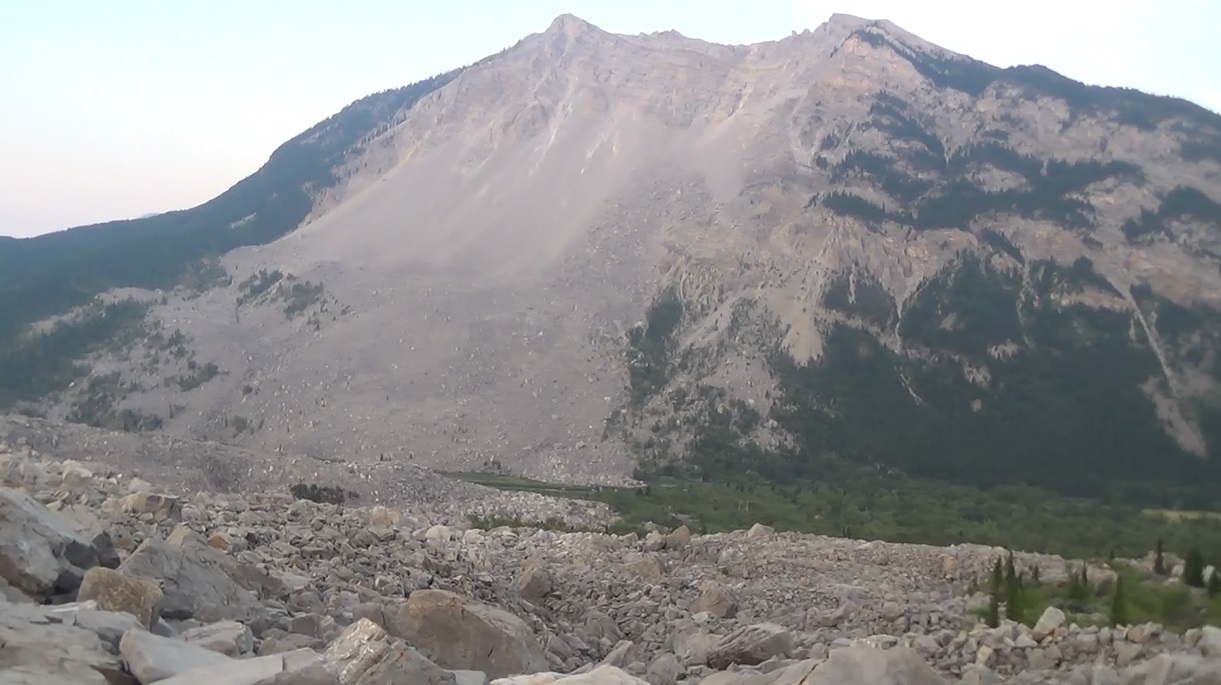 The Legend of Turtle Mountain 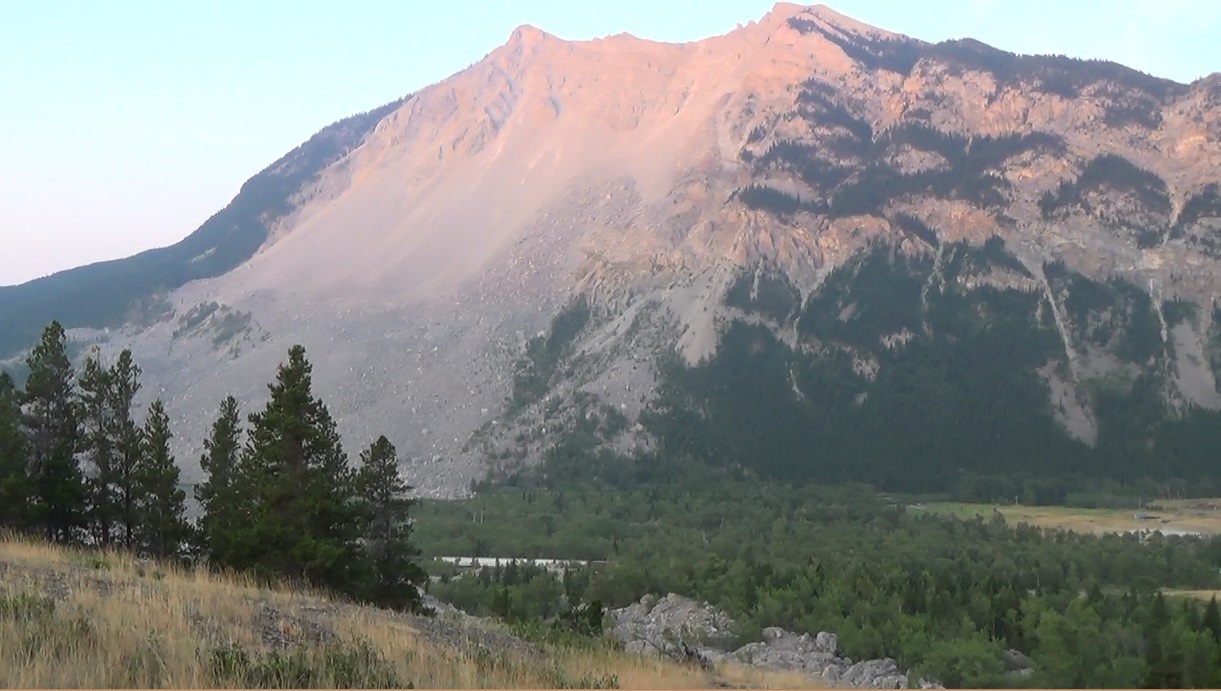 There is some contention on the subject of how the Crowsnest Pass- the high mountain pass that crosses the Continental Divide in the Albertan/British Columbian Rockies- got its name. Some stories claim that the naming has something to do with literal nests of actual crows, while others maintain that the Pass was named after figurative nests of Crow Indians. According to one Blackfoot legend, in 1853, a war party of Blackfoot braves ambushed a group of Crow raiders who had made their way north from Montana. The ensuing battle took place at the base of a mountain. In the midst of the battle, an enormous rock broke away from the mountain and crushed about 200 Blackfoot and Crow warriors. Believing the rockslide to be a divine sign, the two parties quit the battle and vowed to never fight within the valley again. The Blackfoot named the valley the “Crow’s Nest Pass” in honour of the Crows who died in the battle, and called the mountain that had claimed them- which they reasoned must be crawling at an infinitesimal pace- “The Mountain That Walks”. Ever since, Blackfoot and local Kootenai Indians have refused to pitch their teepees within the mountain’s vicinity. 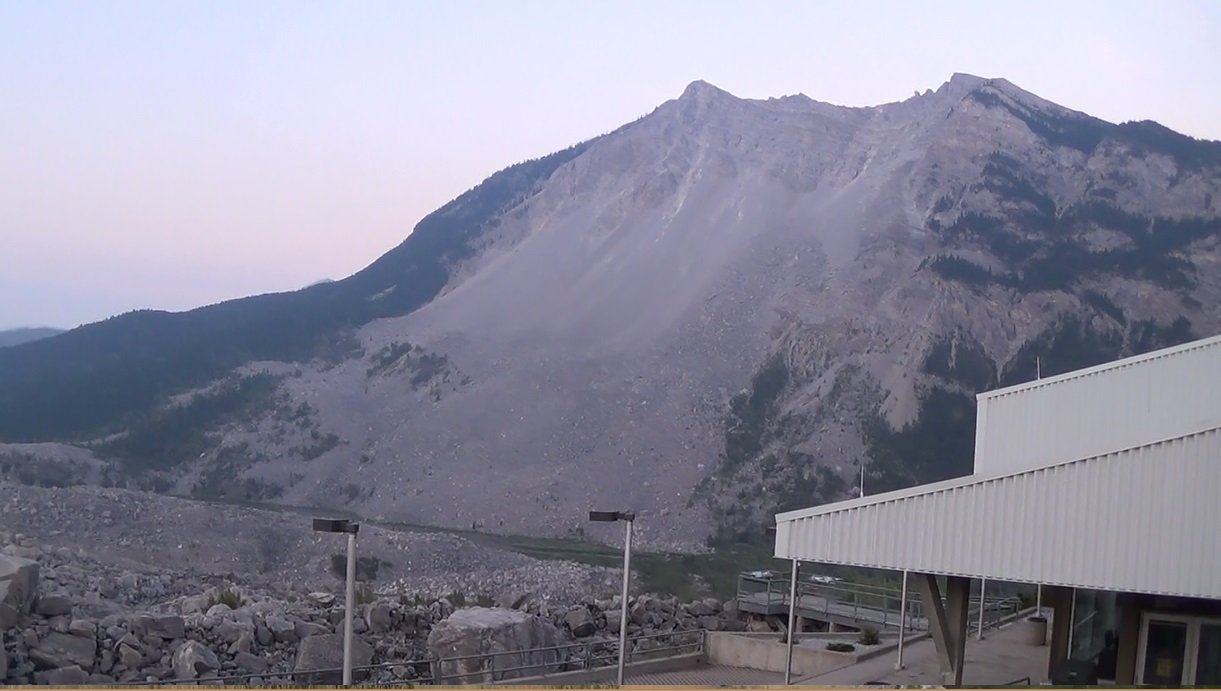 The Founding of Frank 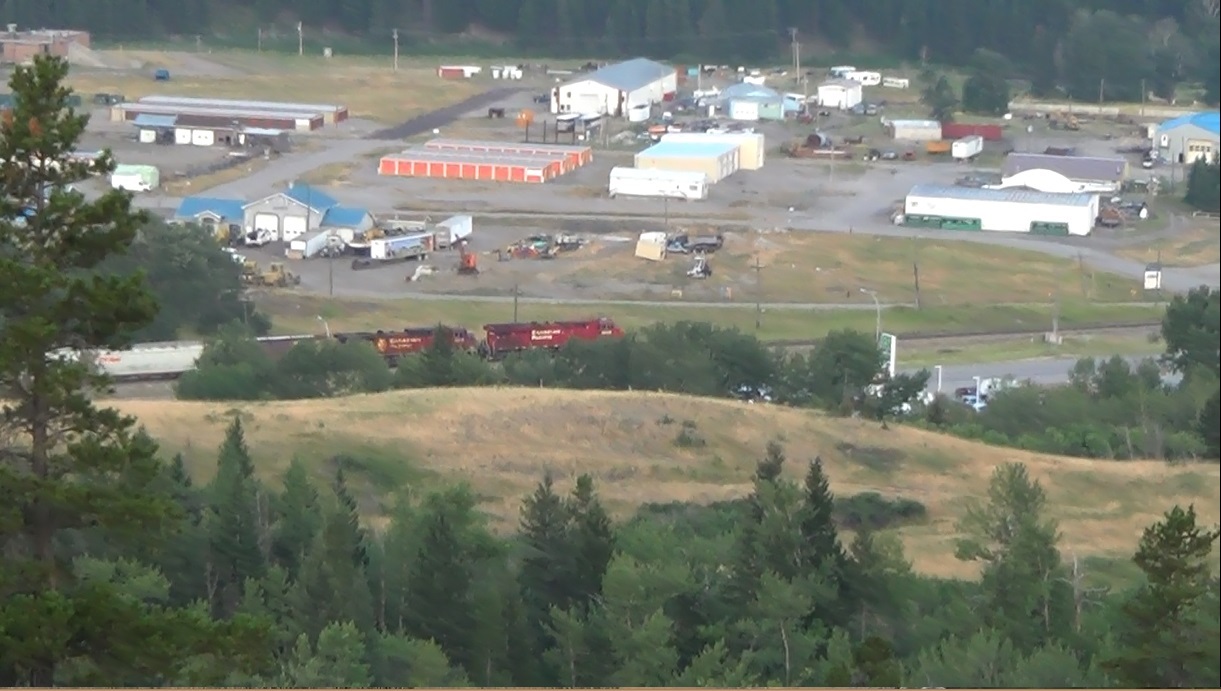 In 1900, Henry S. Pelletier, an entrepreneur who would eventually own a sawmill in Blairmore, discovered an outcropping of coal on The Mountain That Walks- which had been renamed Turtle Mountain in 1880 by a local rancher who likened the shape of the mountain to that of a turtle. Pelletier sold his claim to Samuel W. Gebo, a mine owner from Burmis, who in turn entreated Henry Luplin Frank, a prominent Jewish businessman from Montana, for financial support. Together, Gebo and Frank developed a coal mine at the base of Turtle Mountain in the spring of 1901 and effectually founded the town of Frank, Alberta. 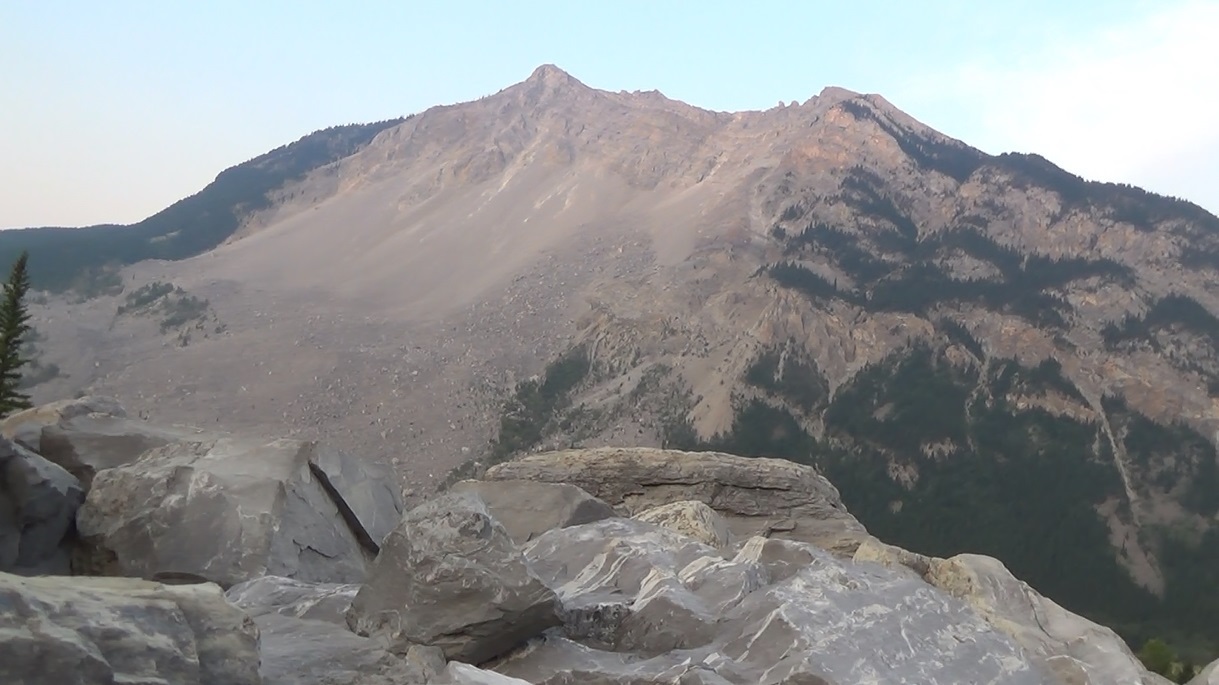 In an effort to attract business to their newly established mining town, Gebo and Frank organized an official gala opening of the townsite that was to take place on September 10, 1901. The event, which was to be free but for the rail fair (Gebo and Frank arranged for the CPR to run two special passenger trains to their town on the day of the gala, one east from Lethbridge and the other west from Cranbrook), was heavily advertised in area newspapers. The businessmen’s marketing efforts paid off, as 1 400 spectators arrived to take part in the event.

After a formal opening in which Premier of the North-West Territories Sir Fred Haulton and Territorial Treasurer Arthur E. Sifton gave speeches, the festivities began. There was a lacrosse game between teams from Lethbridge and Fernie, and a football game between teams from Blairmore and Pincher Creek. There were footraces and all sorts of sporting events, in which the champions received gold medals. Company men guided tours of the new mine, and of vacant company cottages. After the games and the tours, the guests sat down to an outdoor banquet, held under the shadow of Turtle Mountain. Gebo and Frank had spared no expense, and had ordered a ton of fresh fruit and ice cream from Spokane. 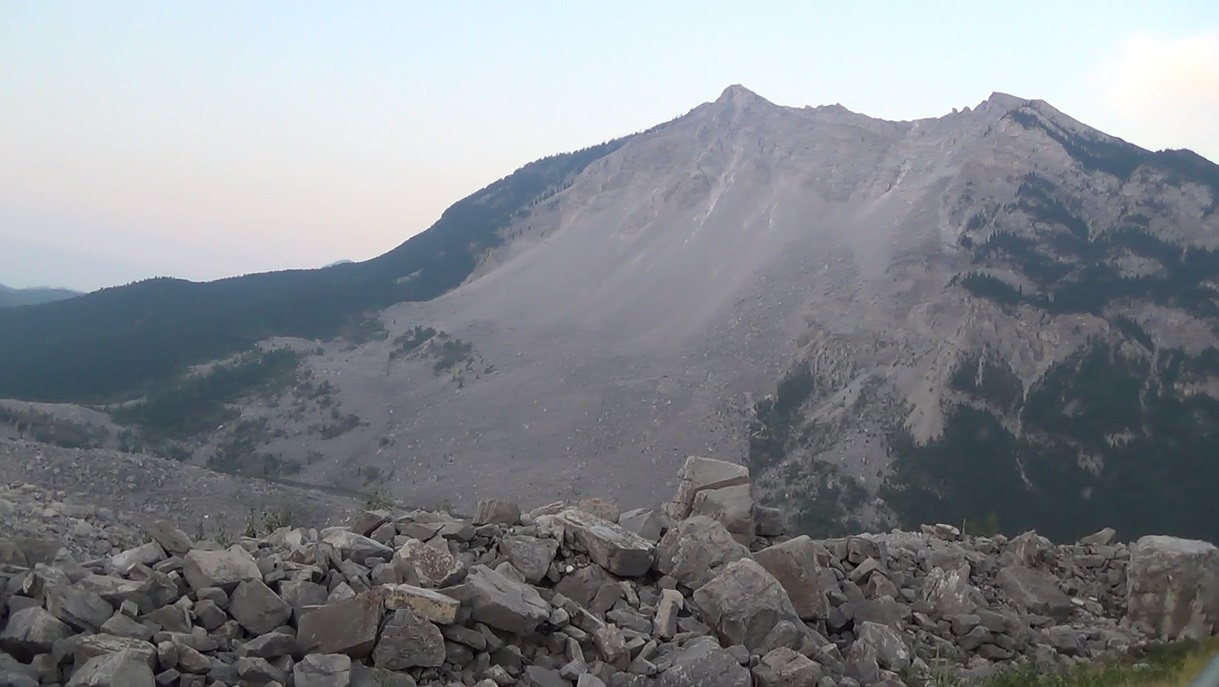 Gebo and Frank’s gala was a roaring success which catalyzed tremendous growth in the town of Frank. In time, the boomtown boasted an electric light plant, a water system, a two-storey school, four hotels, sixteen additional business establishments, and a population of nearly 600. The town’s growth was proportionate to the growth of the mine. The Frank mine bored through thousands of feet of limestone and coal, with a production objective of 1000 tons of coal per day. The operation continued smoothly without event for two years. 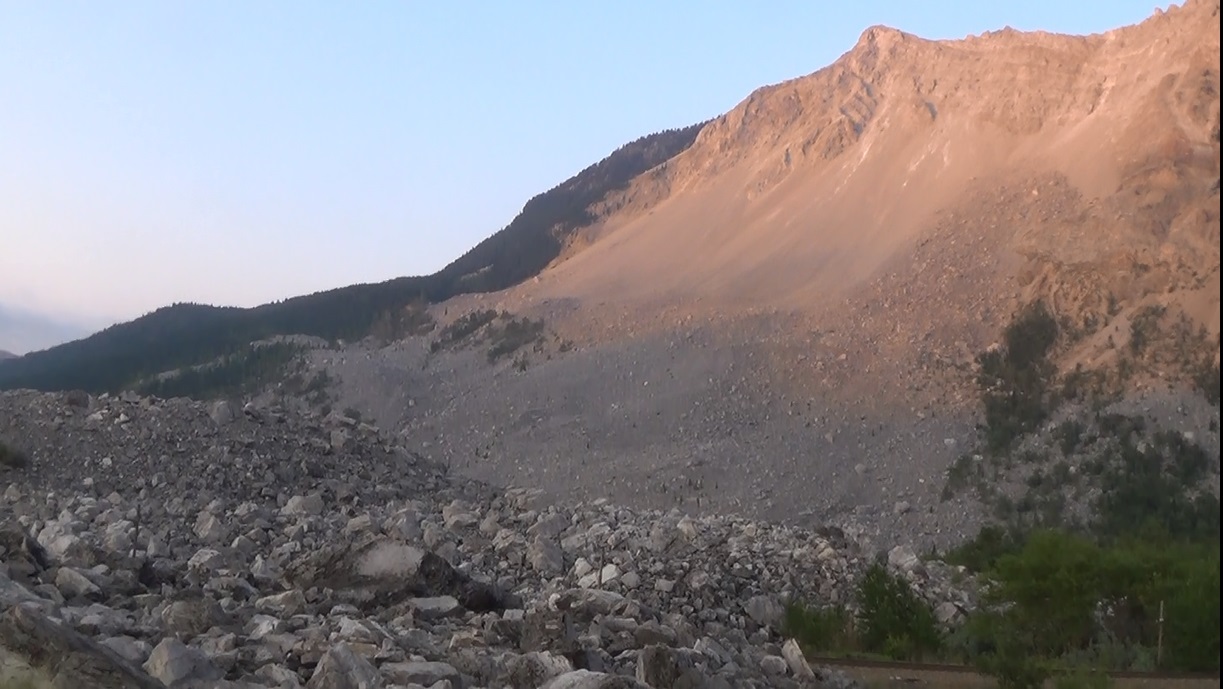 Sometime in October 1902, strange things started to happen within the Frank mine. Solid two-by-four support timbers set up by the night crew were found splintered the next morning, and upraises resultant of freshly-mined coal closed overnight. On certain nights, between the hours of one and three A.M., the mine was beset by slight tremors akin to “the starting and shuddering of a ship truck by a wave”. Some disconcerted miners left Frank for good, believing that the string of strange happenings, which would continue throughout the fall and winter, portended imminent disaster.

Indeed, disaster struck on the eve of April 28/29, 1903. That night, a thick shroud of fog hung ominously on the peak of “The Mountain That Walks”. According to the nightshift miners who descended into the heart of Turtle Mountain, the night was especially cold. 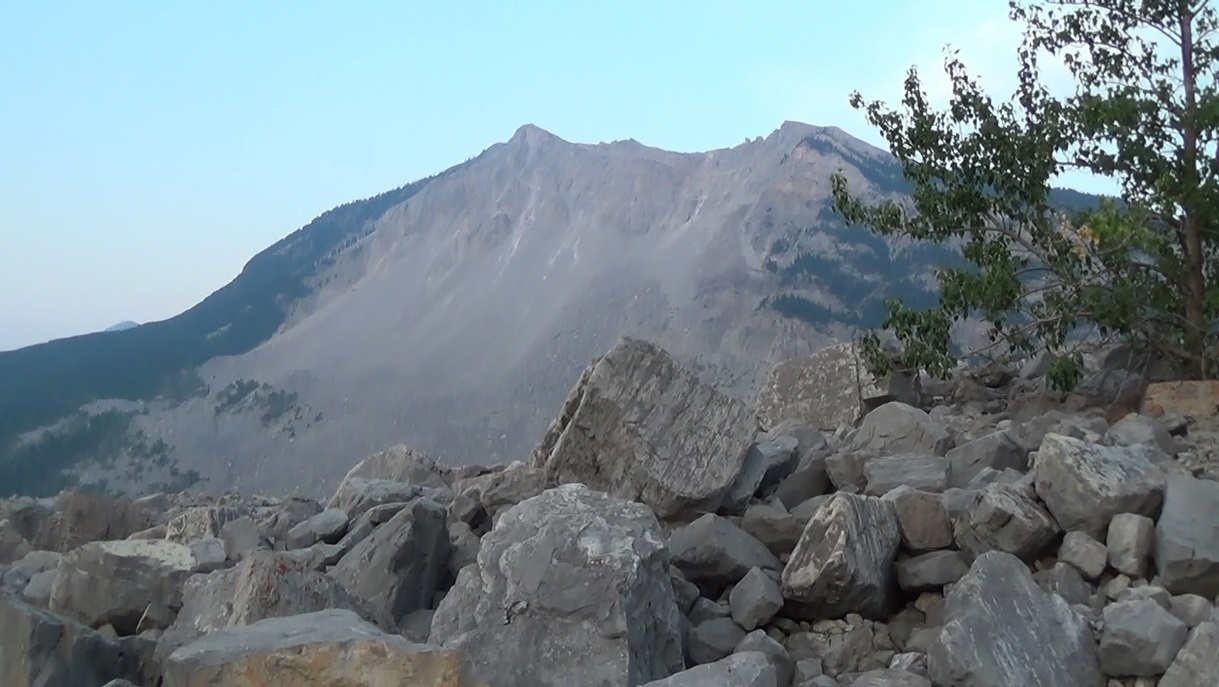 At 4:10 A.M., a freight train rolled pulled out of the mine, bound for Frank. The train crew had just finished hooking up coal cars to the engine at the tipple, which stood just outside the mine entrance, and were heading in to town. Suddenly, there was a low rumble on Turtle Mountain. Taking no chances, Ben Murgatroyd, the train engineer, shouted a warning to the brakemen who jogged beside the train and rammed the throttle to full speed. The brakemen grabbed hold of the handrails, and the train rolled to safety across a bridge over the Crowsnest River.

Within a minute and forty seconds, ninety million tons of rock broke from the east face of Turtle Mountain and slid down into the valley. Rocks destroyed the mine entrance and crashed into the tipple, sweeping away the weigh-scale man and two other miners. The slide ripped over the Crowsnest River and through the eastern outskirts of Frank, obliterating the bridge, a power plant, several farmhouses, a number of businesses, seven cottages, a section of the Crowsnest Railway and a cemetery. In addition to those already interred in the cemetery, at least 121 were initially entombed within the rubble. 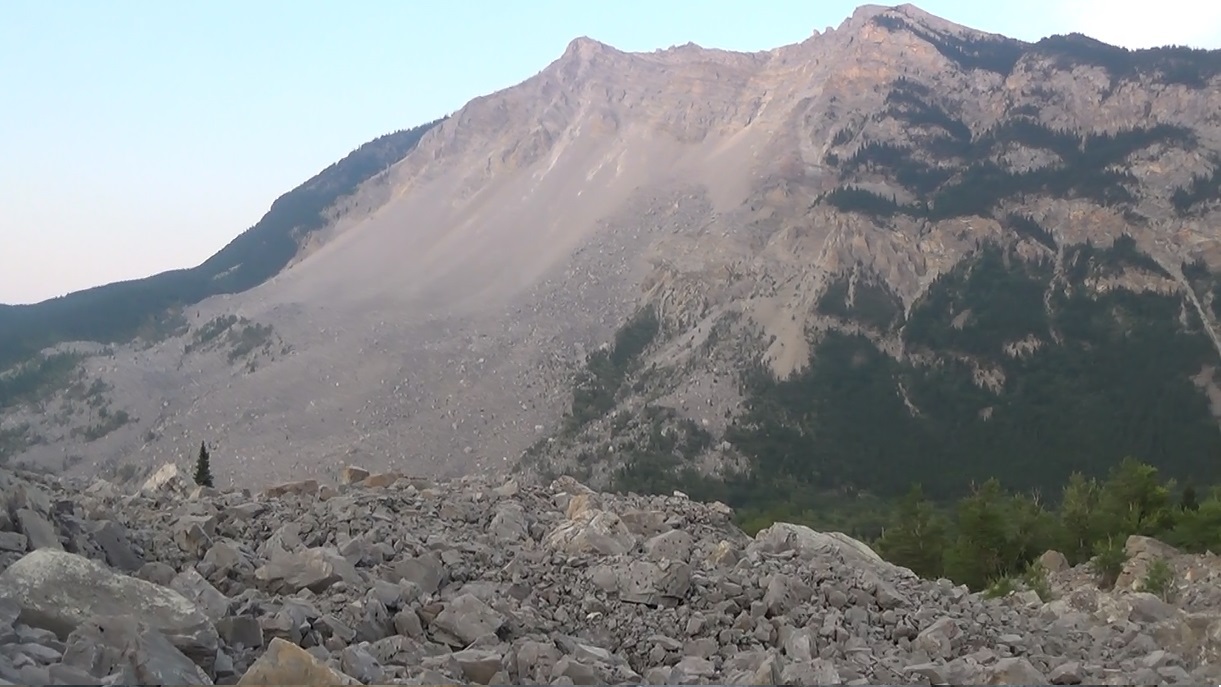 The tremendous crash, which could be heard as far away Cochrane a hundred miles north, roused the sleeping town. Citizens poured into the streets, many speculating that there must have been an enormous explosion in the mines, others fearing the end of the world. In the darkness, the Frank citizens could only speculate as to the magnitude of the catastrophe.

Sid Coquette and his partner Lowes, the two brakemen who had been aboard Murgatroyd’s freight train, knew that a passenger train was scheduled to arrive from the east in twenty minutes. After learning that the slide had knocked out the east telegraph line, the two brakemen set out east across the rubble, hoping to flag the train down before it was too late. As they climbed through the seemingly-endless chaos of limestone rock and dust, the brakemen slowly came to appreciate the extent of the slide. After some time, Lowe ran out of breath and gave up. Coquette scrambled on, eventually emerging at the eastern edge of the rockslide. Exhausted, the brakeman, with the aid of his CPR lantern, located the railway, raced down the tracks and flagged down the incoming passenger train, thereby preventing it from slamming into the limestone mass. 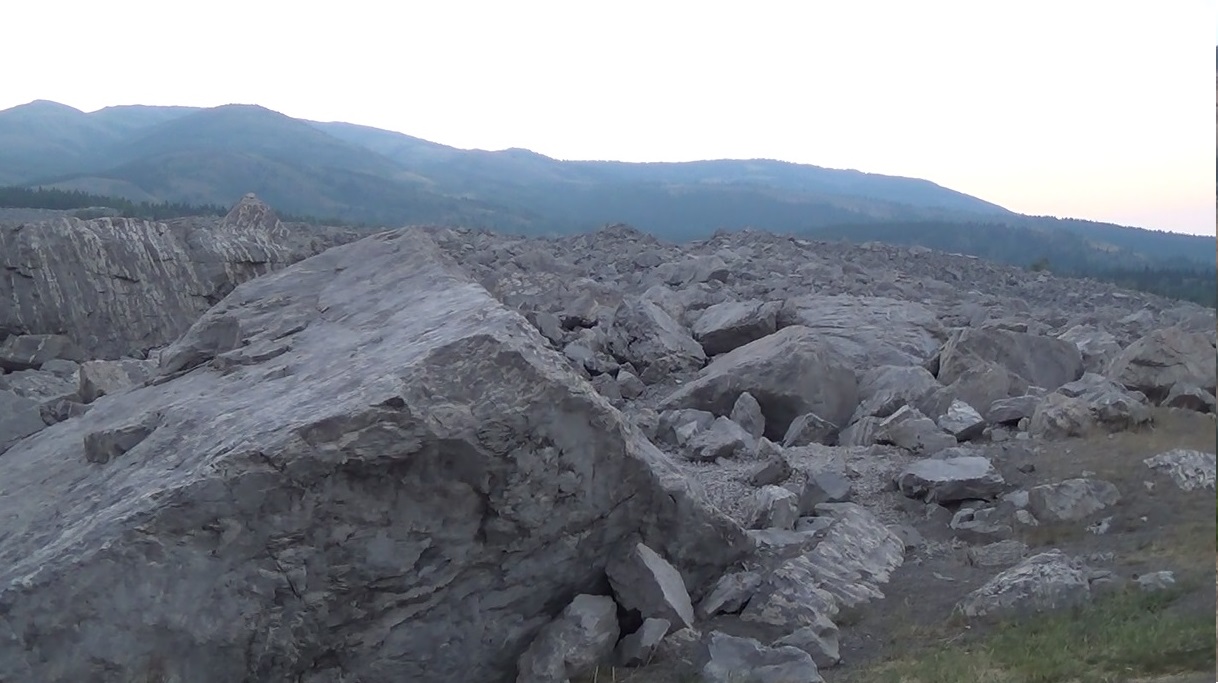 Even as Coquette and Lowes were making their way east, rescuers were pulling injured victims from the wreckage. Throughout the night and the following morning, twenty three survivors- including six adults, sixteen children and a baby- were rescued and treated at the local doctor’s house. Only twelve bodies, some unrecognizable, were recovered from the rubble. At least sixty nine of the town’s residents remained buried beneath the rock. 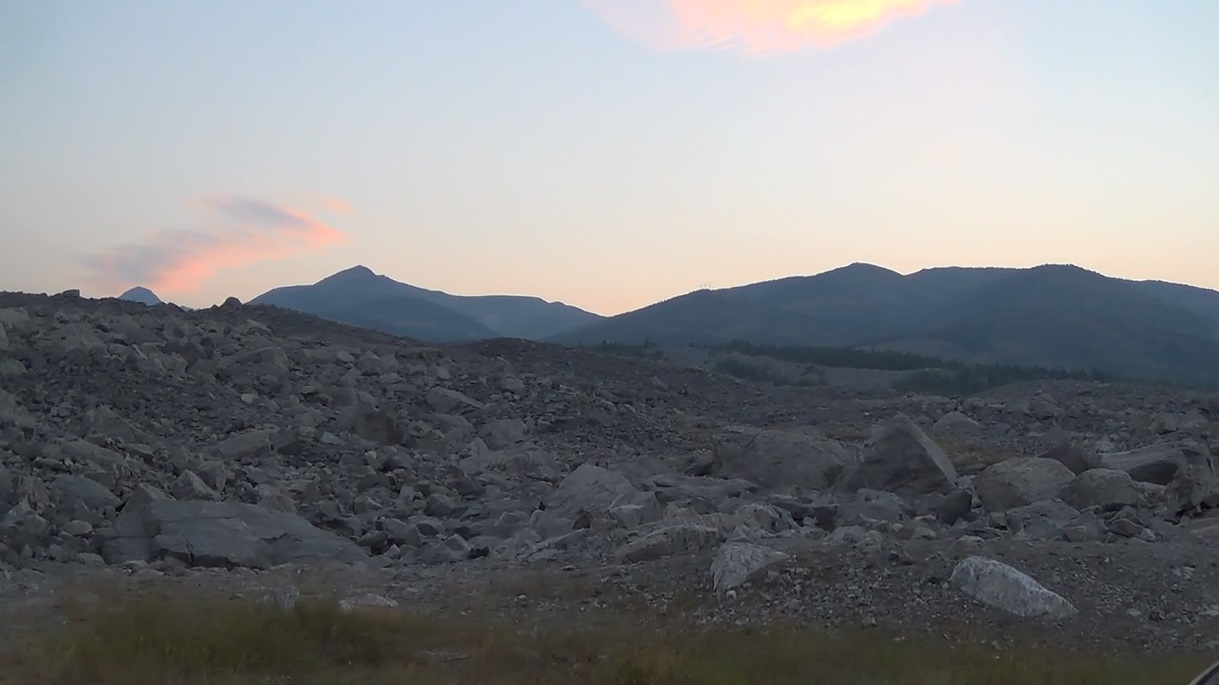 At dawn, a citizens’ meeting was held and search parties were formed. One of these search parties was tasked with locating and uncovering the mine entrance, which had been completely buried in the slide. The townspeople hoped to rescue the miners who were working nightshift. Considering the damage that the mine entrance had sustained, it seemed unlikely that any of the men trapped in the mine would have survived. Nevertheless, the rescue crew worked doggedly throughout the morning and afternoon, removing the mass of limestone and shattered timbers piece by piece.

Late in the afternoon, at about 5 o’clock P.M., the rescuers working at the mine entrance heard a shout from above. At about fifty yards up the slope, they saw twelve miners, weary but relieved, crawl one by one from a hole in the mountain. The miners explained that, after the slide had destroyed the mine entrance, they searched for an alternate escape route. After discovering that all potential exits were blocked, one of the miners suggested that they mine their way out through a particular seam of coal, which would be easier to carve through than limestone. The crew agreed, and began digging through the seam in relays of two or three. Towards mid-afternoon, most of the miners had quit, utterly exhausted. Three men persevered and managed to finally dig themselves out into the open. 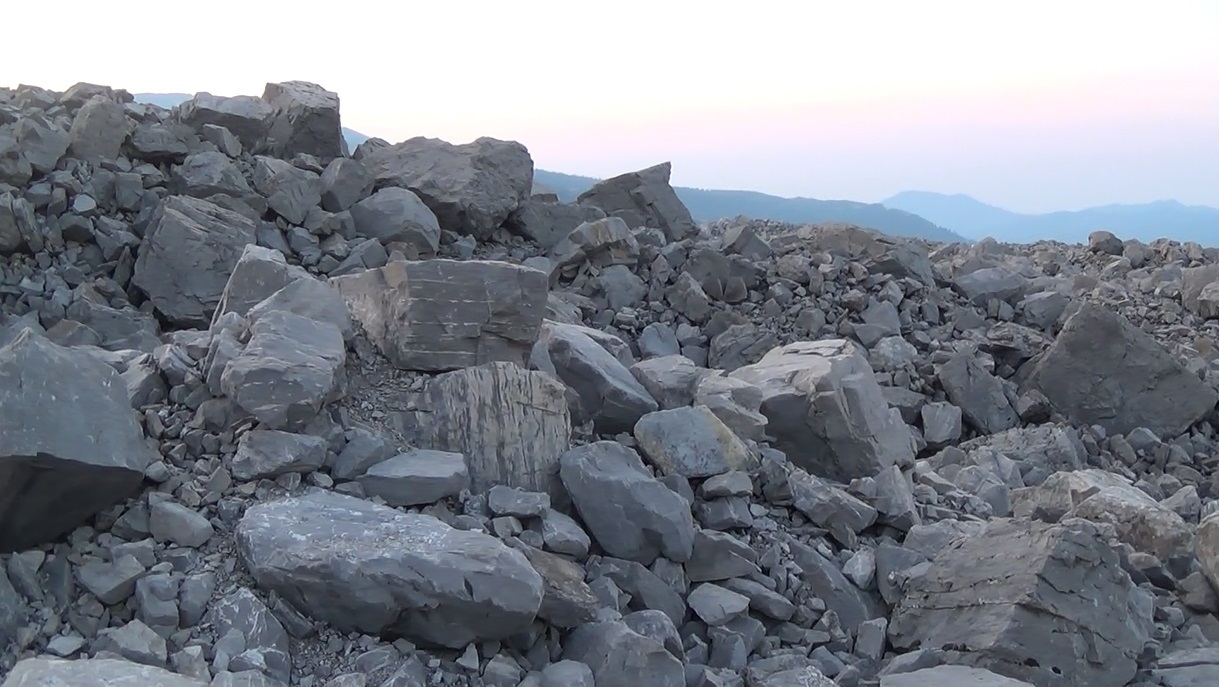 Despite the enormity of the tragedy, the town of Frank did not take long to recover. Out of fear that the remainder of the town was in imminent danger of another slide, the population of Frank was evacuated, and then brought back once engineers allayed that fear. The stretch of the Canadian Pacific Railway that had been obliterated was rebuilt within three weeks. 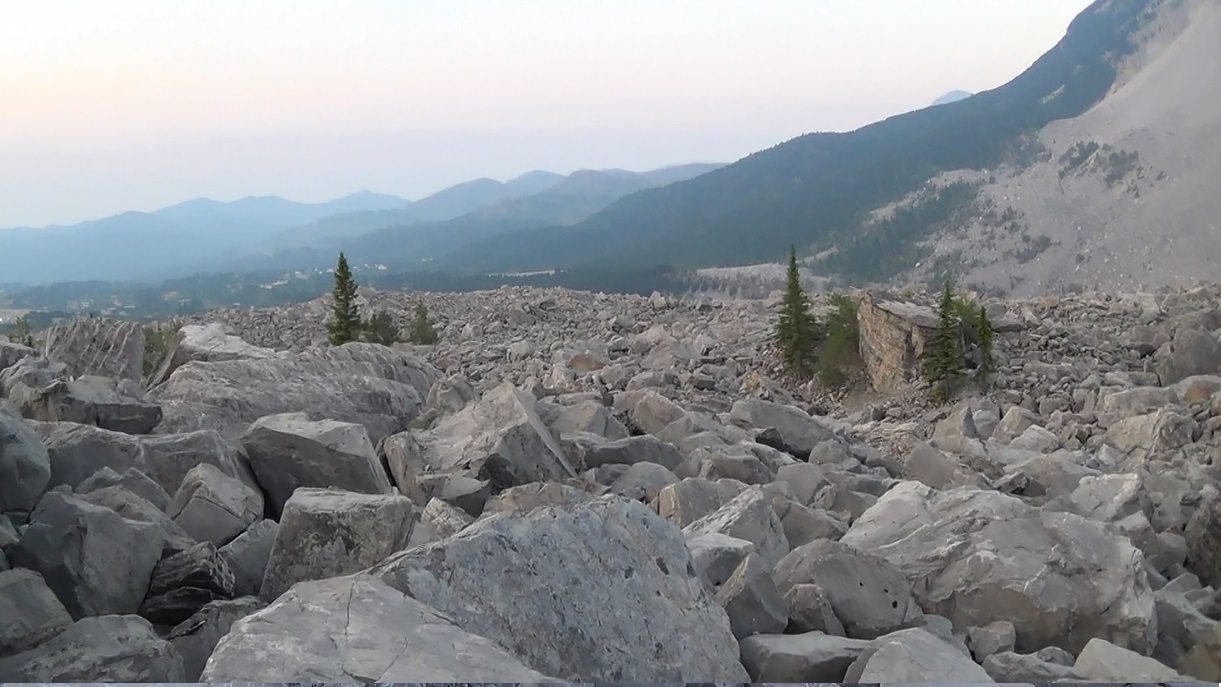 By May 30, the mine was re-opened. Workers who subsequently explored the mine shaft were astonished to discover that Charlie, one of the mine horses, was still alive. Charlie had survived for a month underground by drinking water that, due to the damming effects of the rockslide, had seeped into the mine from the Crowsnest River, and by sucking salt from his harness and gnawing wood from mine carts and support timbers. The rescuers welcomed Charlie back with a hearty meal of oats and brandy. The horse, starving, promptly gorged himself to death. 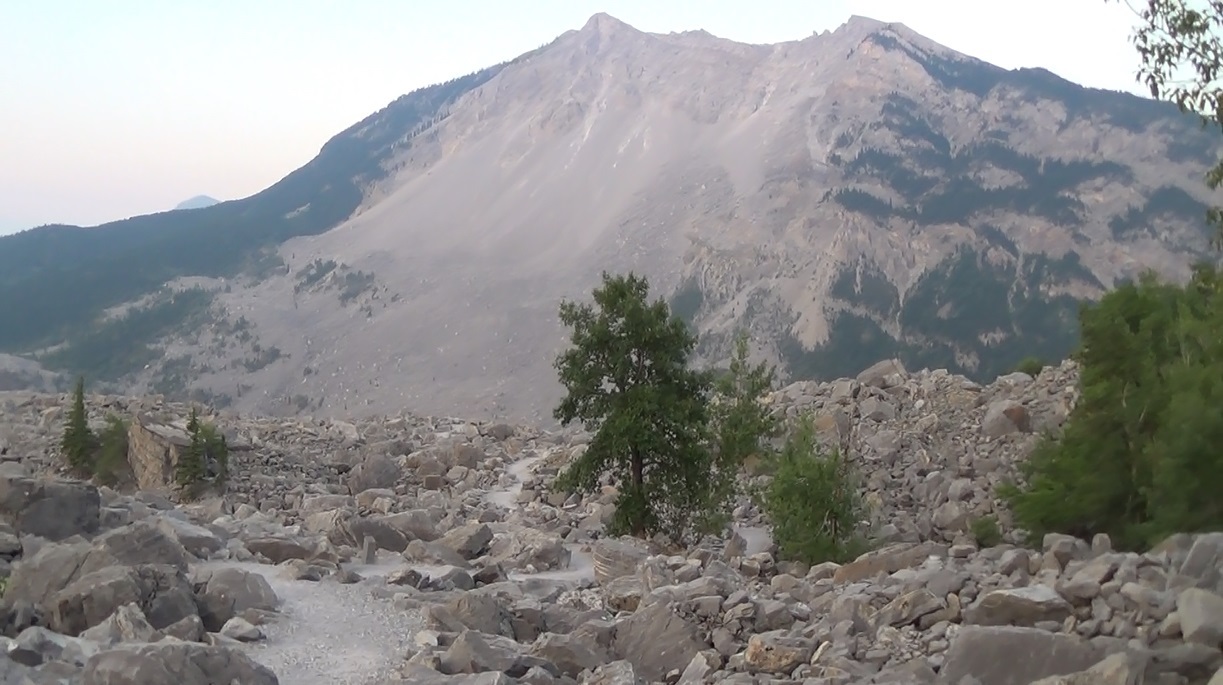 Today, chaos of rubble that destroyed the eastern edge of Frank still lies across the valley of the Crowsnest Pass. The Frank Slid Interpretive Centre, opened by the Alberta Provincial Government in 1985, serves as a memorial to those who lost their lives in the 1903 slide, and to those whose bodies remain beneath the rubble to this day. 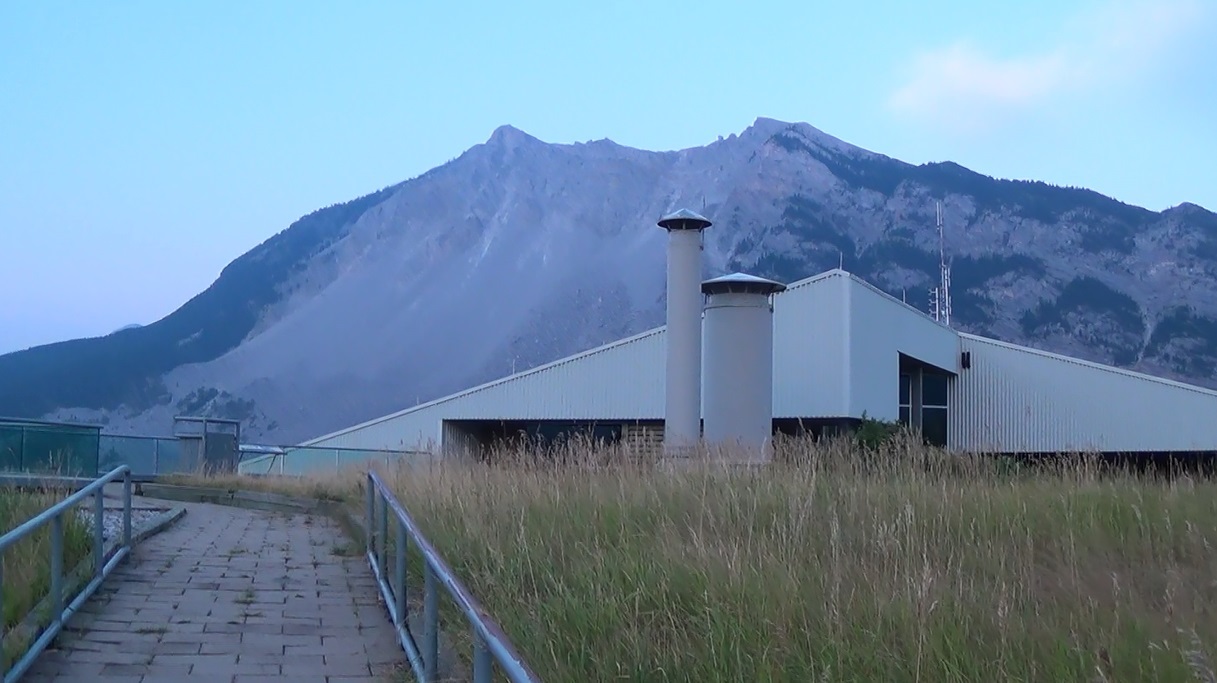