The buffalo of Western Canada were nearly hunted to extinction by the white men?  Right? That may be true but the altruistic view of the Canadian Natives as only hunting for what they could use immediately or over the winter may not be entirely true.  The truth is that over time, the First Nations changed their hunting techniques in a way that made the hunt less “environmentally-friendly” than was previously.  Countless millions of buffalo were killed, en masse, by the First Nations, by driving entire herds (males, females and young buffalo) over cliffs and harvesting them at the bottom of the “buffalo jump”.

The best known of the over 150 buffalo jumps in Alberta is the “Head- Smashed-In Buffalo Jump” which is located just west of Fort MacLeod.

For generations hunters used spears to hunt the buffalo.  The hunt would take place over hundreds of square miles and could take weeks to harvest all the kill.  The hunt was selective, sparing calves and pregnant females. 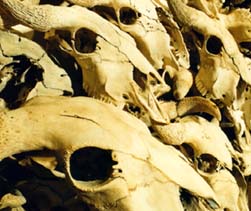 As in the case in every culture, some people looked for a better and more convenient way to plan the hunt.  Some 6,000 years ago, some wise man thought… “Why take the hunt to the buffalo?  Why not bring the buffalo to the hunt?” … and that’s just what they did.

A buffalo jump was not as simple as just driving the buffalo to the edge of a cliff.  It was rather a complex task which required the bosses to select the right area for the jump and the placement of logs and trees or bushes at just the right locations so as to “funnel” the beasts to the edge.  Funneling could also be promoted by selecting a runway bounded by hills and coulees (sharp dips in the land).  The site was generally chosen such that the precipice of the jump blended into the overall scenery.  This way it was too late for the lead buffalo to turn around when he spotted the danger.  The funneling effect also kept the buffalo bunched up so that when the trailing buffalo learned of the fate of the leaders it was too late to do anything about it (Sounds a bit like Canadian politics!).

The buffalo ran to and over the edge, plummeted 10 meters or so and met their makers.  Those which did not die on impact were slaughtered by spear.

Once the dust had settled the women and children moved in to join the tasks of skinning, dressing and separating the meat.

Head- Smashed-In Buffalo Jump is designated as a World Heritage Site by the United Nations (UNESCO).

Special note: Thanks to the keen eye of one of our readers, an error in the original story has been fixed.  According to Julian Welch, horses and bow & arrow were not used during the heyday of the buffalo jump.  Thanks for pointing that out.

(See our story of Napi – The Trickster, who split a rock near the Jump site.)

(with thanks to the Glenbow Museum, Calgary)